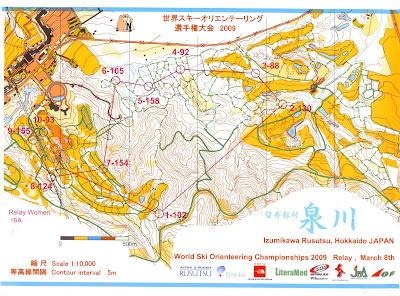 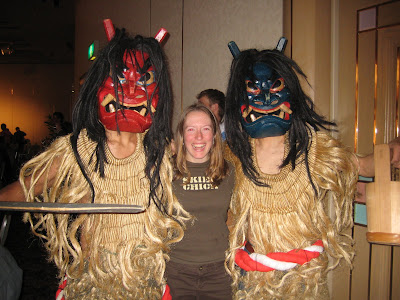 This was at the after party.
The last day of racing was yesterday, in the relay. After much debate, the women went with our originally-planned team, although it was decidedly not the fastest team. I wouldn't mind changing some of those bylaws to make things less "fair" and more oriented towards having the fastest people race the most. Anyway, it had gotten colder, and it was still very windy, which meant that the snow was windblown and dry and the slowest thing I've skied on since that long course. Again, a bad pick of skis led to some slow skiing, but I'll try not to whine about that too much. Some day I'll learn to bring enough skis to races so that I can actually race on the correct pair.

I scrambled, and got off to an awesome start, way out in front of everyone by the end of the double pole zone (ok, maybe not way out in front, but I couldn't see anyone to my immediate sides). Unfortunately, at the end of the double pole zone, we hit the skating tracks, and they hadn't tilled, and I almost fell on my face, my skis decelerated that quickly. We did the usual long climb out of the fields, and I could see the race separating into people who were on good skis versus those of us on bad. It was just two races. I spiked 1, at the top of the climb, and then we went screaming down a skating trail to get to 2, which I also spiked. I had cut across the field, because it was just as fast to ski on the new snow on top of the crust as it was to ski on the groomed trails, and I came to 2 from the top of a little cliff. I didn't want to just jump, it was a bit high for that, so I did a strategic roll, rolling downhill over my back, sideways, and landing with my skis on the trail. I wish someone had been there to see it, I was quite impressed with myself.

3-6 were all in the maze, and I discovered that I could actually classic ski through the woods faster than I could skate on the trails. Then I discovered that where the guys had double poled and broken through the crust was much faster, so I started following the guys' cut-throughs any time I could, and that worked well. Then we had to go up the wall, and that took a while. I almost caught our third skier on the men's team, everyone was hoping for a sprint finish, but he held me off by 20 seconds or so. Bummer.

Anyway, I came through as the 7th team, which is where I had been on the relay in Russia as well, so I guess I tied the best ever American result! Our second leg, Julie, had a clean run, and then our third leg, Candi, had a typical leg, but managed to come in under the time limit. 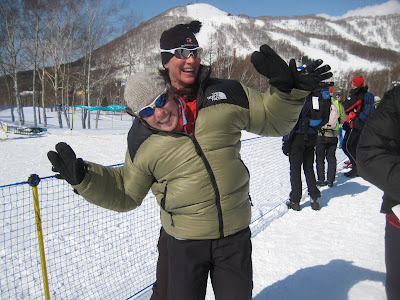 we were all getting kind of silly watching the men's relay. We figured that Greg didn't need his jacket while racing, so Marie-Catherine and I took it over... 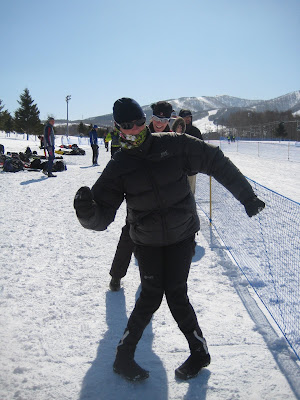 Sue, breaking it down... 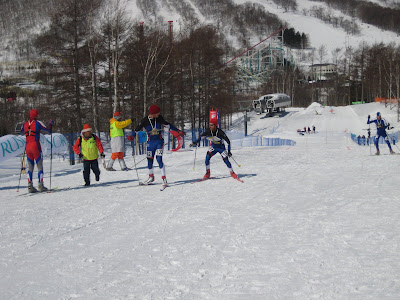 Adrian passing off to Greg in the men's relay. 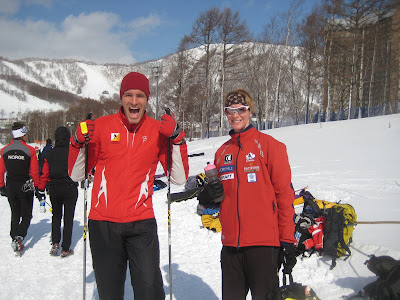