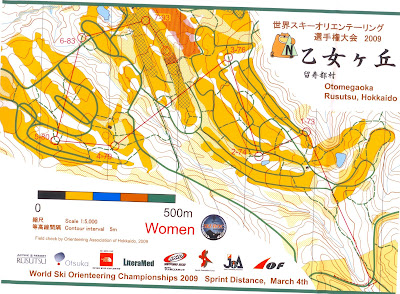 Today we kicked off the first ski orienteering world champs outside of Europe with the sprint race. The start was remote, which meant that we all got bused up to someplace else and finished in the usual finish area. This was also a downhill sprint, losing 100m of elevation and only gaining 40m over the whole course. So it was fast, with fast skis and a 1:5k map - this meant that I always felt that it was just coming at me too fast to keep up with, mentally. I can't show you the maps because they don't let us see them until after all the races are done, just in case teams wanted to memorize the trail network or something. I skied well, for what its worth in a downhill race, and I didn't make any mistakes in the navigation. That was the more important part. It just felt too fast, though, and my brain still doesn't feel caught up with my body. I ended up in 22nd, which is definitely my best sprint result ever, and beats my 24th place in the long in Russia two years ago. Hopefully this is a sign of better things to come. Tomorrow is the long race, which is typically my forte. We have 675m (I think) of climbing, over 16km, which is A LOT. I like that, for some strange reason.

If you want to follow the race live tomorrow, here is the link to the main website, and you should just be able to click on the button that says "live results". Also, if you're a big nerd, you can check out the splits, to see where I lose or gain time on my competitors. 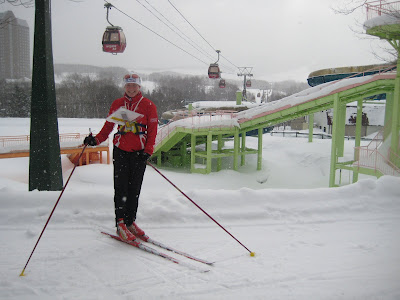 The hotel here is kind of crazy. It has an amusement park as part of it, which I suppose is only open in the summer, given the amount of snow over some of the important bits... but the hotel (resort, really) has a regular hotel part, where we're all staying, and then the tower, which I think is more rooms (we aren't allowed into it because then we could see the courses, which would be cheating), and there is a monorail between the two. We are allowed into the restaurant at the foot of the tower, so I have take the monorail to get to the restaurant. Its faster to walk, but I wanted the experience. 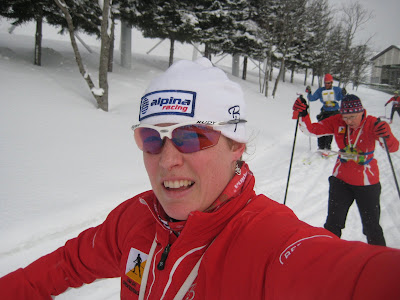 This sort of shot is a lot easier to take while riding than while skiing... 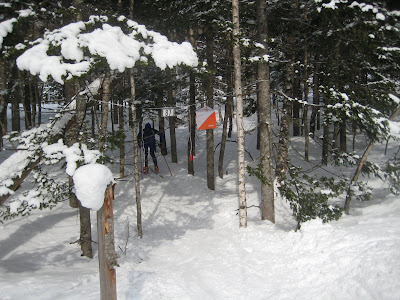 One of the controls with a Finnish skier leaving it on the model course. 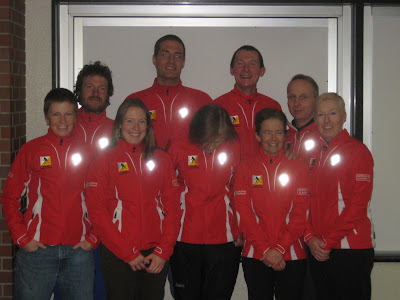 This is the team, except for Sharon who is looking at her feet for some reason. Back to front, left to right: Adrian Owens, Greg Walker, Neil Hunt, Alan Oprsal. Sue Grandjean, me, Sharon Crawford, Julie Raymond, Candice Raines. 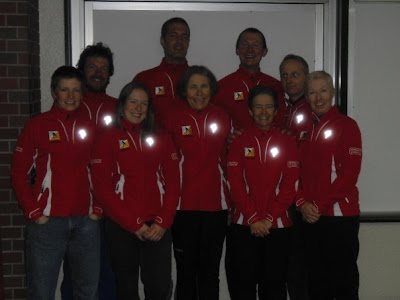 A better shot of the team, stolen from Sue. 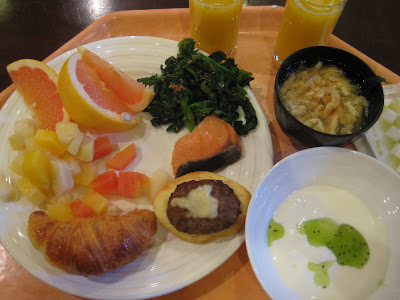 Breakfast before the sprint. That is miso soup in the corner. And some salmon and green thingies. The white bowl is yogurt with (I think) kiwi sauce. It just tasted sweet. Normal breakfast, eh? 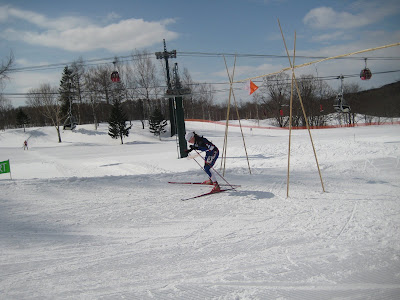 Here is me leaving the last control.
Posted by Alex at 5:22 AM

Nice race! My favorite breakfast in Japan was corn flakes, and a little bowl of rice with some raw fish thrown in there for kicks.

Congrats! Sounds like you had a great race. Keep up the good work, and good luck tomorrow.