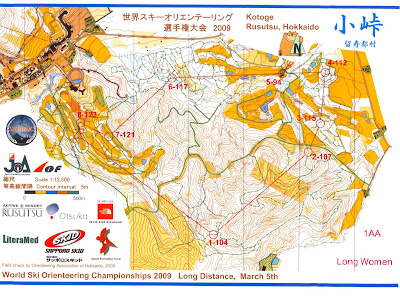 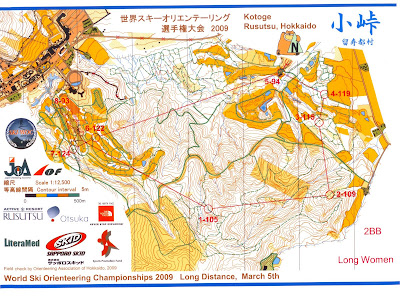 Today was the long race. I had high hopes, since it was supposed to be very tough and I like tough courses. It did not go so well, though. I picked the wrong pair of skis to race on, a pair that was very good in cold dry conditions (what can I say, I tested on the warmup track which was not in the sun and had not been skied on much, and didn't take into consideration the forecast for +4C. Yes, stupid). It warmed up to +4C, and it was very sunny, and very slushy by the end. The slow skis were a factor the whole race, but they were really driving me nuts on the last long climb that had 225m of climb. I wanted to die. This was my fault, I could have taken a route that was more direct but went up the wall that I had climbed in the first lap, and that was mentally so grueling that I did not want to do it twice. This was stupid, because that would have been faster, and I would not have noticed the slow skis as much because I would have just been herringboning. Stupid. The word of the day today: stupid.

I had a not so great start, I was in the third row and the first control was in the same direction for everyone, so we were all in a long conga line going up through a field, and there was no going around. I tried to just stay calm and plan out other routes, but it was a little frustrating. I finally got around some of the slower climbers as we went into another field, that was more steep, it was a narrow trail but enough people had been herringboning and coach skating that I could almost V1, although mostly it was a coach skate. I got to 1 no problem, and headed off to 2 on some narrow trails along the ridge. It turned out this was all downhill, and I voluntarily slid on my ass a couple times, because I saw no bail-outs and the trail was already snowplowed out. Some of those little suckers were STEEP! I guess that is what you get for volcanic terrain. Anyway, I got to 2 no problem, but it felt very hesitant, probably because of all the butt sliding. Then I made my first and biggest mistake, going to 3. I was on a big trail, looking for a little trail off to my left, and there was a guardrail to my left, so I was sort of skiing without thinking and I missed the trail, where people had piled snow. This ended up being a 3-4 minute mistake.

The next three controls were accurate, but very hesitant, and the skiing felt sluggish. Then I hit the wall, and I could see four girls near the top a girl partway up, and realized I wasn't quite as alone as I had thought. This wall is like highschool hill times six - just a soul-sucked-death-march uphill. I put my head down and tried to coach skate faster than the girls ahead of me, and by the time they reached the top I was closer than I had been, so I continued with skiing "fast" and reading my map. I made it through the map exchange, and got some badly needed sports drink and water. Did I mention that it was warm out? I think it probably got much warmer than the predicted +4, but I have no way to telling. The sun felt like it was melting me, though.

The first two controls were in similar locations on the second map, so I planned out the rest of my route while skiing on autopilot, and decided that I did not want to ski the wall again. This was probably mostly mental, because it would have been faster to go up the wall, but whats done is done, I decided on the death-march of the big trail, with butt-slow skis, and I had plenty of time to consider other, faster, routes on my way up. I had passed one Kazakh on the second lap, and I came within 30 seconds of a Lithuanian, but I was much further back than I had expected or hoped. Dang.

Anyway, its over, I'm tired, and I wish I'd gone faster but I have two more races to make up my mistakes to myself. Its frustrating to have a bad race because of equipment, but these things happen, and I only have myself to blame. Of course my best slush skis are sitting in my living room under a nice layer of summer wax... 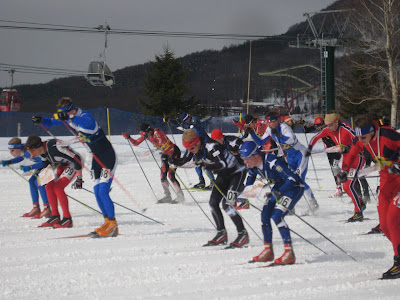 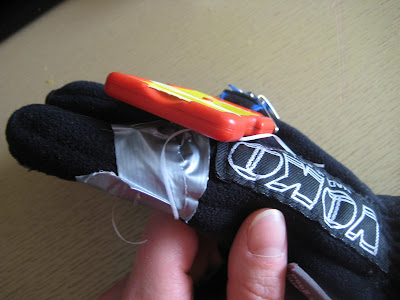 I came up with a duct-tape and dental-floss solution to the floppy emit brick - the dental floss goes around the brick, and the duct tape holds it to my index finger. 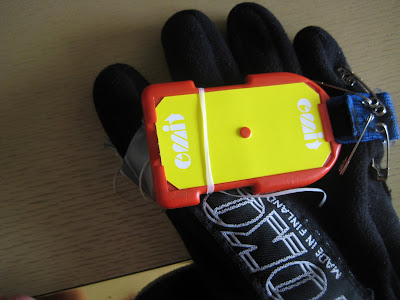