The orienteering section of CSU was running a mile time trial last Friday night, and since I figured nothing I do on Fridays could be as much fun as running circles, I headed over to Harvard to join them. I haven't run a mile since highschool track, where I think my PR was 6:21, so I wanted to see if I could beat that, using my residual ski fitness, since I haven't been running at all this summer.

I drove over to Lori's house (Tangent: my car has been in the shop all week getting a new bumper after I got rear ended the other day, and I had to pick it up Friday afternoon, which meant a 14-mile bike ride before this time trial. Grumble.), and we jogged over to the track with her whippet, Presto. He had a ton of energy since Lori hasn't been running due to an injured hip, so we figured we'd make one of the fast people take Presto for a couple laps. We got there a little late, and Ross and Brendan had already started. This worked out, because Ross agreed to be my rabbit, running a 6 minute pace for me, and Brendan and Lori would be the cheering squad. Ian showed up around then too, so it was a right party. 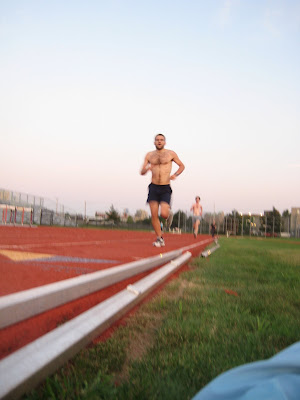 I'd forgotten how springy and bouncy a track feels underfoot, I really felt like I had wings on my ankles as I did some strides to warm up. Being a forefoot striker really does help when you're on a track. If only my achilles would agree. Its amazing how quickly the adrenaline kicks in when you're standing on the startline, even if its just to run circles alone in the dark. The first 200m felt effortless, they flew by in 41 seconds, which is fast, but I like to think of the first 200 as free speed, since you can't feel anything yet and maybe you're not building lactic acid. Or something like that. I slowed down in the next 200 and came through the lap in 86, but unfortunately I kept slowing down going into the second lap. It was starting to feel hard, and I didn't feel like I could run fast enough. I knew I was in trouble when I came through the 800 in three minutes flat, running the next two laps faster than the first two was going to be quite painful. I can tell I'm hurting when my strides lengthen and the tempo slows down, my chin lifts and my arms feel like they're in slow motion under water. My breathing was starting to get pretty noisy, although it was still rhythmic, and I tried to pick up the pace near the end of this third lap. I hit the 1200 at 4:34, and even in my lactic-acid-soaked state, I knew that I'd need to run faster than 90 to break 6. Its amazing how hard it is to speed up when your legs feel that heavy. My breathing was pretty ragged at this point, sucking wind and trying to cheat reality. I really felt like someone had hit the slow motion button on the video camera, as I came around the corner I tried to kick even more but it was barely worth mentioning.

I crossed the line in 6:04, and I was simultaneously pleased and disappointed. Yes, I'd wanted to break 6, but I also proved to myself that I am faster now than I was when I was running track. Those four seconds can probably be attributed to poor pacing and a lack of running fitness, but I feel like my overall fitness is fine. I was able to absolutely push to the limit, and I'm pleased about that. Of course, cyclocross season will help with exploring my pain cave...

My knee held up fine throughout the speed, so I am declare myself healed from this stupid knee injury. The next TT is probably going to be a 3k, and that is one that actually matters to me. Hopefully it'll be fast.

Presto got some exercise chasing a ball on the infield when we were done running. I think he was probably pushing 40mph, if not faster, when he really got going. That dog can MOVE. Nothing runs quite like a long-legged sight hound... I wish I could fly like that. 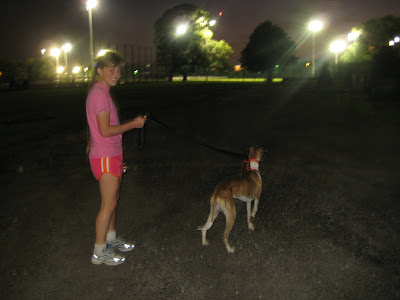