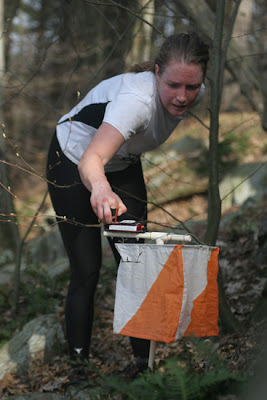 I'm skipping Sucker Brook (and that awesome Waterville Valley race, with the SNOW PIT!) this weekend in favor of the sprint orienteering championships and the ultra-long champs in Rochester. It also means I get to go home and see my parents and my dog, who continues to have up days and down days but is definitely hanging in there. The decision wasn't a hard one to make. Anyway, the Rochester Orienteering Club (ROC) has been putting out a lot of press about this event, and I actually get mentioned as a contender in one of the articles in the Democrat and Chronicle, our local paper. Go me! I guess its a good thing I decided to show up. ROC has been doing a lot to promote orienteering lately, they made a youtube video, which granted is only pictures and music, but trying to get people aware of the sport. Because this sport is pretty sweet, especially in the top echelon of runners in the US. 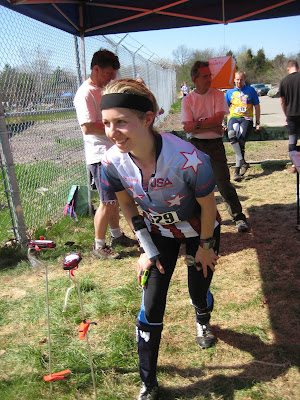 Kat, preparing to go off on the middle distance at the CSU A-meet last April.

Speaking of orienteering, CSU holds training races every week through the fall. Starting around now, its all night-orienteering, since we don't start 'til 7pm and the sun is down by then. I held the last event, it was three individual sprint courses (~10-20min, 1.5-2km) up at Prospect Hill in Waltham. At each control, instead of having a flag, we hang a dowel wrapped in reflective tape, so that your light can pick it up. I also used e-punching, so that we could download the times afterwards like a real race and have splits and all that. Ed got the gold star of patience award, as he stood out there in the dark, in a swarm of mosquitos, for almost 2 hours while people ran the sprints, downloading the data from the finger sticks onto his computer. There were no casualties, although Lori ran into a tree and bruised her knee pretty badly. Night orienteering is interesting, you have to really change your strategy, since you just can't see all the details that are available to you during the daylight. I suppose, just like riding a mountain bike at night, that it is great for improving your technical skills.

Anyway, those technical skills will come in useful during the sprint champs this saturday. They're at Mendon Ponds, which is practically where I grew up, so at least I have the home court advantage! 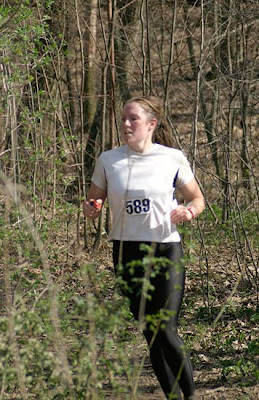 Me finishing the middle race final at the CSU A-meet. It was hot that day, I hope its cooler this weekend...
Posted by Alex at 9:48 AM