A few weeks ago, Ken Walker (one of the guys involved with masters' ski-o) invited me to be on a team with him and his son Greg (who is on the US ski-o team with me) for Racing Ahead's 12-hour adventure race in Pawtuckaway State Park. Ken and Tracey Olafson had won some sort of masters adventure racing thing on team Phast Generation (they had been past generation, but were told they were too fast for that, so just added an H). I waffled for a bit, but it just sounded like too much stupid fun to turn down. Plus, I'm still in the volume period for training, so more is better, right? Problem was, I'd already pre-reg'ed for the Quad Cycles cross race sunday. Whatever, I'll do a 12 hour adventure race the day before a cx race, no biggie. What did I just say about stupid?

I drove up to Pawtuckaway Friday night, we went over some of the rules in our packets, and then pitched a tent and went to sleep, only to wake up five hours later, at 4:30AM. Some breakfast, and then we had to go set up the transition area. We started out with one teammate running across the parking lot to pick up the maps (me), and then we were off. We took our time making sure we had the right maps and copying some of the controls onto our supplemental pawtuckaway maps, because that isn't something you want to be fiddling with in the woods in the rain. 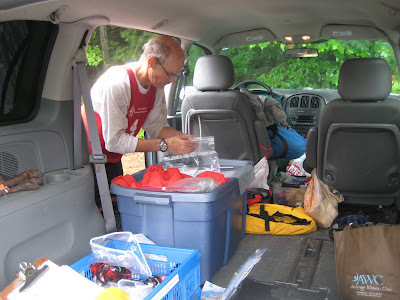 Ken rummaging through our transition vehicle.

The first leg was the bike leg, and Ken told me straight up that he hadn't been riding all summer, so was going to be the weak leg. Greg has been riding, but not so much on technical stuff, so they gave me the task of navigating while on the bike. I had my map holder from ski-o on, that let me look at the map without having to hold it or pull it out of my pocket or whatever. We had everything in large ziplock bags, since it was raining, and that was a smart move. By the first control we'd caught up to two teams, and then going up some of the hills to the second checkpoint we caught another two teams. I guess Ken thought he'd be one of the weaker riders out there, but its amazing just how BAD some of the adventure racers are when there is some navigation.

Things were going pretty smoothly until the ATV trail we were on crossed a beaver pond - I made Greg go first (he's 6'7", so I figured we'd get to see how deep it was), and the water only came up to his knees, which was my waist, so that was alright. I carried my bike over my head, having just had the bottom bracket replaced and the front hub rebuilt... no need to trash them so soon! Anyway, a couple more fairly easy checkpoints, and then we got onto some of the really fun trails. Of course, this also meant a slower pace, because especially with slimy rocks and roots Ken wasn't riding much of this trail. We nailed the checkpoint on that trail, and then started a half mile bikewhack, which was not nearly as much fun as it sounds. To make matters even more interesting, having the map holder sticking out in front of me meant that I couldn't see where I was putting my feet. This is fine when you're on the bike, I mean, you're doing it wrong if you're looking at your feet, but trudging through the woods it helps to see where you're stepping. Anyway, shortly after that we missed a shortcut that was also flooded by beavers, this routed us around the swamp on a fun singletrack trail, which also meant it was slow. Probably lost 20 minutes or so on that loop around the swamp. 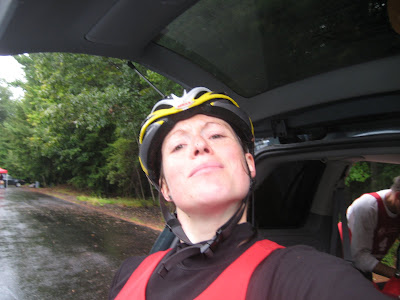 Me feeling good after the bike leg.

We came back into the transition zone after about five hours. This is a long time to only go 24 miles, but there was no point in making Ken go anaerobic on every uphill. We were now onto the paddle section, and Ken and Greg had brought kayak paddles for this purpose. There were three competitors in every boat, which meant it was riding pretty low in the water. I also had a canoe paddle, rather than a kayak paddle, so every time I'd paddle it would throw off the direction of the boat. Thus I became prime navigator, which maybe wasn't a great plan since I've never navigated with a boat before, but despite being hesitant, we were clean. I think our paddle was as good as anyone else's, mostly because we had Greg in the front providing some serious power.

Unfortunately, it was still raining, and the fact that I wasn't doing any of the paddling meant that I was getting really cold. Every time I'd get out of the boat to get a control I'd get even wetter, so by the time we hit control 9, on a long passage through a swamp that was barely floatable, I could barely hold onto the map because my hands were shaking so badly. We finally pulled out of the swamp and had a kilometer-long portage, for which we conveniently had Greg's shoulders, and trotting along trying to keep up (the guy can run with a canoe on his shoulders. I'm in awe), I warmed up enough to be absolutely furious when they told us at control 10 that we'd missed the cutoff. By my watch, we had an extra 20 minutes, but apparently they had changed the cutoff times, because they wanted the canoes back in time for the 3-hour teams. This meant that we were automatically behind every time that had finished the entire paddling section, which really sucked, because our strongest section was going to be the trek. Grrr! 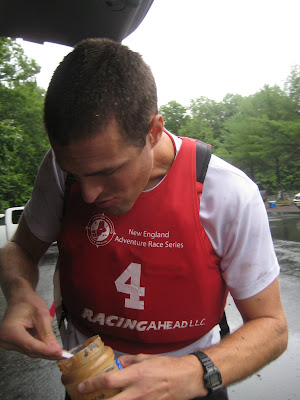 Greg gettin' after some peanut butter.

Anyway, we started on the trek, and immediately passed two teams before control 1. Pawtuckaway is an amazingly accurate map, but it is very detailed and very technical, so the fact that we had so much orienteering experience among us really just put everyone else at a serious disadvantage. The winning team had a navigator who is also a very serious orienteer, otherwise I think we were probably the best team out there. We were doing pretty well, and had passed yet another two teams by control four, looking like we'd have plenty of time before the control 6 cutoff at 4:30pm. Control 5 was at the top of a mountain, and adventure racers, instead of using something solid and unaffected by weather, drew a numbered code on a tree trunk somewhere on this mountain top. The clue was "50m +- northwest of fire tower, south side of a ledge, broken pine tree". Useful. We wasted 45 minutes up there searching for the clue, and three teams caught back up to us. Eventually we asked the guy with the radio if he could give us a clue, and he radioed back that there were four teams searching for the clue. We could hear the guy on the other end of the radio saying that the clue might have washed off in all this rain. Great. At this point, we were all pretty hypothermic, and our 45 minute delay meant that we'd missed the control 6 cut-off. I was too cold to be furious, but it was certainly frustrating.

We slogged it out to control 10, where we were supposed to go if we missed the cutoff, and picked up a map for the finishing score-o - we had thirty minutes left to get as many controls as possible for additional points. We did pretty well with this one, and finished with two seconds to spare. Overall, it was a frustrating experience to have the rules changed on us (the canoe cutoff) and have the checkpoint on the mountain be so ephemeral, but it was really fun nonetheless. I loved working with Ken and Greg, our personalities worked together just right that we weren't biting each other's heads off after 12 hours of alternately moving and freezing. The results aren't up yet, but I heard a rumor that we were fourth. Not too shabby, since there were a whole bunch of teams there.
Posted by Alex at 10:33 PM

Hey - I came here for a 'cross report... ;) Good job on the adventure race though.