While I was at the SR/U23 camp, I noticed Martin had wooden rollerskis. I remembered hearing about some guy's dad who was making them, so I said "hey are those the wooden skis that some guy's dad was making? how do you like them?", and it turns out that some guy's dad was Martin's dad, Peter Breu. Martin really liked the skis, and we talked for a while about the possibility of getting CSU on some wooden skis, since they are cheap (their major selling point is that they cost about half of what most rollerskis cost), and they have a brake. The CSU adults seem to be fixated on this safety stuff, I haven't quite figured it out yet. I guess not having any kids makes you more callous with other kids' safety. Anyway, I guess Martin talked to his dad, because Peter emailed me asking if I'd like to demo a pair of skis. I jumped at this opportunity, because it really would be great to have some cheap skate skis that have some sort of safety device.

I won't go too much into how much V2 skate skis suck, but lets just leave it at them being unreliable and high maintenance. And very expensive. CSU has some sort of deal with V2, which means most of the kids buy V2 skis, plus V2 skis have brakes and speed reducers, which the parents (and more intelligent coaches) really like. Look good, have fun, safety third. I was hoping that these could be a cheaper alternative to the unreliable, high maintenance, and high cost V2 skate skis. 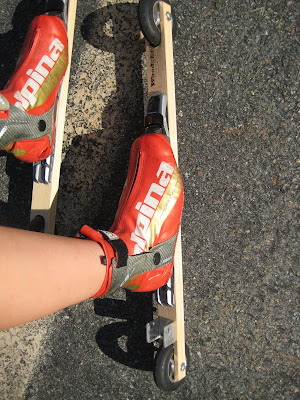 The skis came in the mail, and they had a wooden version of the V2 brake (but not close enough to violate any patents, Peter had checked that) attached to the back of the ski. I brought them along to a skate interval workout, with the brake attached, and basically it just confirmed my belief that rollerskis are not meant to have a brake, at least one of that design. They were super clunky and the weight in the back of the ski with the brake was seriously messing with my technique. I was pissed, and had to verbally restrain myself from throwing the skis forcibly into the woods.

So, I took off the brake. This is done by taking out one screw, so its not a big deal.

The next time I skied on them was for a skate OD with some pickups interspersed. This went much better, without the brake the skis are great, they handle just like my Elpex skate skis, which are a generic aluminum skate rollerski. Peter talks about the weight of the Hickory dampening some of the road vibration, and I could sort of feel a difference, but on the recently tarred-and-graveled section of the Littleton loop, they were no better than my aluminum skis. While skiing easy, I did not notice the extra weight (I think he says they're 5 ounces heavier than Marwes, so thats 10 ounces per pair of skis, which is ~.6lb), but during the pickups I could definitely feel the extra weight under my feet. Granted, the average eastern Mass highschooler will not be doing pickups or other speeds on rollerskis, so this is probably not an issue.

The shafts also have a lifetime guarantee - Peter says he has been making these for four years, and gave a pair to a 300lb friend who is a ski coach for testing purposes, and this coach hasn't broken the skis yet. So based on four years of data, the skis are strong. Who knows what happens over the years with repeated wear and tear, but the shafts are guaranteed, so you can continually replace them if they break. I imagine this might be a selling point for some people. Myself, I tend to not be heavy enough to break skis or rollerskis...

The wheels are the same as the pursuitski wheels, generic 100mm wheels that come in three speeds, fast, medium or slow. Really, there are only two things that set this ski apart from all the others - its wood, and it has a brake. I don't think the wood either helps or hurts the ski, and the brake is superior to the V2 brake, simply because the V2 one brakes at pivot points too often. So, if you're looking for a ski with a brake, these ones fit the bill. But I feel rather strongly that one should never skate ski with a brake - rely on your own agility and your body's resilience to take care of yourself. Walk down the hills you're uncomfortable skiing, and get off the road if the traffic situation is dicey. 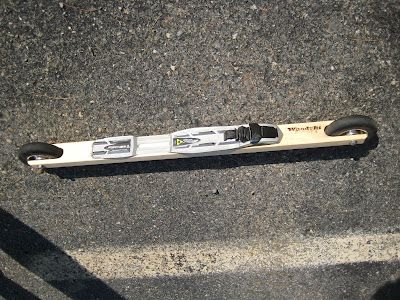 My final impression is that these are GREAT skis for the price - the price ($130)just can't be beat for highschool skiers, especially in MA where they only race skate. I probably wouldn't recommend the skis to the JO kids or other elite skiers, just because they felt a little too heavy, and at that point you may as well plunge into the deep end and pay for the lower center of gravity of the Marwe's. None of those kids want a brake or speed reducers. But for the vast majority of skiers, these skis are perfectly adequate, and half the price.

Thanks to Peter for letting me demo his wooden rollerskis. Hopefully he'll design a brake that doesn't affect your technique soon! Then this ski will have two advantages.
Posted by Alex at 10:18 PM

Great review. You answered all of my goofy questions about the WoodSki (including whether it could hold up to my excessive girth)! Too bad the brake didn't work out.

As a former Western mass HS skier, I'm a bit offended that you say Mass High Schoolers only race skate! Out here, half the races are classic (as they should be), and it is only the backward east that prevents the State Championships from having both a classic and skate component... :)