As I had mentioned, I was signed up for the Quad cycles race on Sunday. I spent the night in NH, camping with the orienteers (actually I had to bribe people with leftover pizza from the AR to stay in someone's tent), and I woke up a little stiff. I figured what I needed was a short run to shake out the legs and loosen up, so I signed up to run the green course (sort of medium-long advanced), once registration opened up at 9. Once I got going I felt pretty good, physically, but I kept making errors in the control circle, and plenty of errors on my route as well, which is what happens when you refuse to believe your compass. It was rather appalling how long it took me to run a 4km straight-line course, but last I checked I was still in first. I think the AR probably just fried my concentration.

Anyway, warmup over, I drove down to Bedford, assisted by a pile of oreos and a giant cup of coffee. Got there with plenty of time, managed to get in three laps of the course before my race. It was pretty fun, there were a couple power sections but plenty of fun bits, and although my legs felt a little on the flat side I was pumped to race. The one problem was that it was 80 degrees and sunny, and there are no feeds in cross. The masters who had just finished looked pretty parched, and some of them had been racing with a bottle in their back pocket. I considered that approach, but peer pressure won me over when I saw that none of the women were going to carry water.

Lined up second row, behind a little powerhouse in the pink skinsuit who didn't know how to clip in, so I got a pretty bad start. I was on her wheel as she passed some people on the straightaway after the first turn, passed a couple more people (when you start in last, there are plenty of people to pass!), and then we started down the bumpy grass downhill and I realized I had to get around this girl. Into the chicane and she was having major issues turning her bike, we were in a tight line, but there were gaps opening, you can't let that happen! "Turrrrn the bike. Just turn the wheel sweetie" and then I realized I sounded like an asshole, so I shut up. Couldn't get around her on the long power section, but she closed the gaps at least. Across the barriers, into the run-up/ride-up, and I knew she wasn't going to make it, so made sure to take an alternate line - yup, she bobbled and dropped a foot and I got through and everyone else was stuck behind her.

Now it was down to seeing how much time I could put on the people behind me, see if I could catch up to Michelle and the girl in the gearworks kit. On the first off-camber turn, I discovered that it was way easier to carry my speed if I went further down, rather than trying to cut it tight on the steeper part, and I was sort of close to Michelle by the end of that lap. The other part I did really well was the single barrier at the end of the lap - you came down a hill, had to go around a 180, back up with a single barrier halfway up. Everyone was trying to ride that corner, but it was way faster if you got off first and ran around it swinging your bike... just like Gloucester.

Going into the second lap, Rebecca Blatt passed me, and I was able to hang on as she dragged me up to Michelle. I hung on to Rebecca across the pavement, which gave me some distance from Michelle, and passed the Gearworks girl on the turn into the single barrier. I was barely able to hold Rebecca's wheel across the pavement, but it gave me some distance on gearworks.

Lap 3 I was mostly on my own, but I could see Perri Mertens ahead of me - Rebecca had passed her, too. By the end of the lap, I realized I was closer than I had been, so I started trash talking in my head, which helped, and by the end of lap 4, I was probably only 10s down (which looks like forever in a 'cross race - like you'll never close that gap). I could see someone closing on me, it wasn't Michelle, someone else in red, and I sort of hoped it was the leader so I could do one less lap. She caught me just past the finish line going into lap 5, I gasped out "are you winning?" and she just laughed. "God no! I wish!" and then started to ride her brakes, so I went around. The girl couldn't handle a bike, but boy could she put out watts... anyway, I tried to hang on her wheel on the grassy gradual uphill before the barriers, but just couldn't do it. I came close to her on the ride-up, because she was running it, but that was the closest I got.

Perri was close, but she was able to do what I couldn't do, and hold Clara's wheel across the pavement. That was the end of that chase... I came through the lap and noticed that Perri was as far ahead of me as she had been on lap 3, and that was sort of the end for me. My lower back had started cramping up a little on the last lap, and coming through the lap it spasmed once or twice, just a warning that I was going at an unsustainable pace, and I was suddenly noticing how much my legs hurt. That last lap was ugly, but I focused on riding the technical parts cleanly, and didn't get caught. Of course, I didn't catch anyone either. Who knows how the race would have been different if Clara hadn't come through like that on the fifth lap, but apparently a 12-hour AR isn't great pre-race prep, either.

In the end, I'm quite pleased with that race - both with the effort and the result. Despite being my third race in two days, I felt better than I felt all last year, which is certainly a good thing. I don't think I've ever beaten Perri, so to even be within striking distance is also a good thing.

I stuck around for Cary's race, and I like to think that my cheering got him from 8th to 6th. He would have been 5th if he hadn't been stupid about the sprint, but I got a sweet picture of him losing the sprint for 5th: 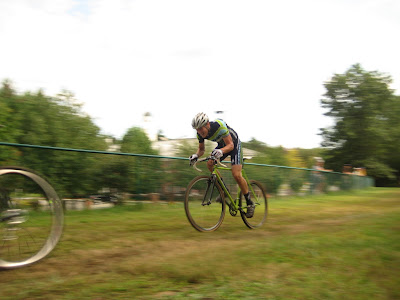