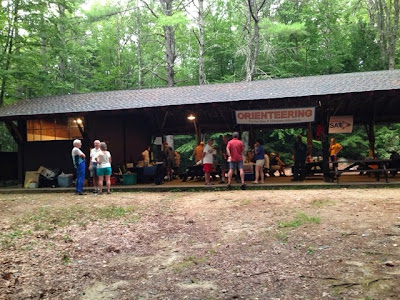 Last weekend I attended the almost-famous Pawtuckaway Camping weekend, hosted by the UpNorth Orienteers.  My relationship with this place has changed, over the years, mostly toward the good end of the dreading it --> drooling for it spectrum.  This probably has to do with the fact that my orienteering skill has improved to the point where I find all those boulders an enjoyable challenge rather than a recipe for hours of confused and abused lostness, but I wouldn't have gotten there without paying my due share of blood to the flies and tears to the house-sized boulders and prayers to the gods of orienteering.

This is a fantastic weekend, because it is such an awesome laid-back atmosphere, with some pretty serious competition hidden in the corners. I started out with the red course, since I'd heard that the largest number of people were running it.  The intention was to take it at a race effort, and see what my knee would do in response to running as hard as I could through the woods on an uneven surface.  The good news is that there doesn't appear to be any lasting damage from this, so regardless of what the MRI results say, I think I should be ok for the October race weekends.  The bad news was that I completely and utterly wilted in the heat.  I was basically stumbling through the final controls, and all I could think of was watermelon.  Specifically, cold watermelon sitting on ice for even more coldness, like they had at Wapack last weekend.  I was going back and forth with Ernst Linder for most of the race, but in the end he had more stamina in the heat, and put 45 seconds into me on one control, that I just couldn't reel back in.  He ended up beating me by 15 seconds. So close!

The next activity of the afternoon was the canoe-o, which entailed my teammate Kseniya and I splashing around in the lake and occasionally actually finding a control.  A friend had painstakingly explained to us how to maximize our speed and direction in windy conditions, but we completely ignored his advice, more through lack of skill than lack of desire.  Luckily, we stayed upright.

After a delicious and copious potluck dinner, it was time for the Wicked Haahd Night-O (WHNO).  The trouble with this event is that I'm always way too full from dinner to want to go out into the scary dark woods, but somehow I get persuaded to go out there every time.  Given the super hot conditions during the day, I knew I was pretty depleted even before I started, but thankfully I made it through without cramping or otherwise dying.  The pack was spreading out already by control 2, and I was near the back of it, resigning myself to just being slow tonight. Not much energy, and lots of sloshing noises coming from my belly, sapped my desire to run hard.  But, by control 3 I saw some people running in a variety of directions (none of them to the control), and I sensed my chance to get away.  It's tough to make a break in a night-o, because you can see the lights from so far away, but sometimes 45 seconds is enough to get out of sight, so I put a little oomph into my waddling and hit 4-5-6 alone.

Christiane, a visiting German runner, made contact at 6, but she went way left to go around the lake to 8, and I was once again on my own.  Once you get over your fear of the dark, night orienteering is actually pretty awesome.  You know there are others out there, but you can't see them, and it's definitely fun to nail controls at night.  Cresting the hill to 8, I saw Gheorghe, a visiting Moldovan, bent over his leg nursing a cramp.  It had been a hot day, and tough to hydrate enough between the day's races and the night-o, so I wasn't surprised by this.  He was able to recover enough to trot around the rest of the course with me, but I could tell he was sort of out of it, not doing much navigating on his own anymore.  I overshot on 9, not having a clear attackpoint from the trail, but corrected with only 2 minutes lost, and still no lights, so this was good.  The humidity of the night and efforts from the day started to catch up with me near the end, unfortunately, and I made two stupid mistakes, 2min on 12, and another 2 min trying to find the finish.  D'oh!  You can't be slow AND make mistakes, you're only allowed to do one or the other.  Luckily, it was enough (barely) to hold off the other ladies, and I was 5th overall.  Results - scroll to the bottom for the night-o. 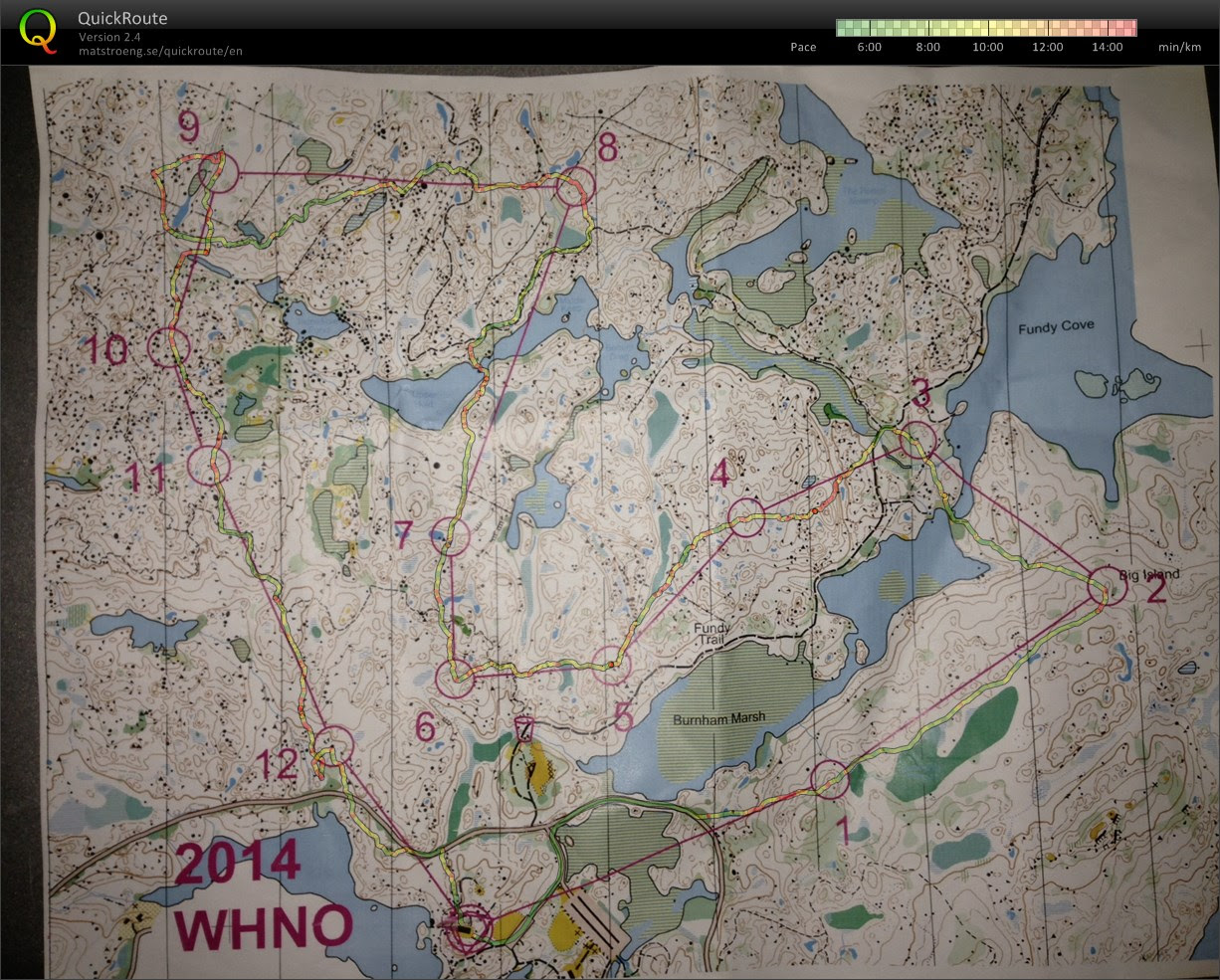 Sunday morning, the focus for me was on training.  First exercise was to blast through the shortest advanced course at full speed, and then do it again, to gain more confidence the second time 'round.  This accomplished, I set out on a longer course, with my compass in my pocket, to work on reading the map and doing a long terrain run.  It was a lovely cool morning, and I had a lot of fun trotting through the woods and enjoying the sights and sounds at a comfortable pace.  This meant the time wasn't very good, but since I wasn't racing, I was ok with that.  Some days, that's not what it's about. 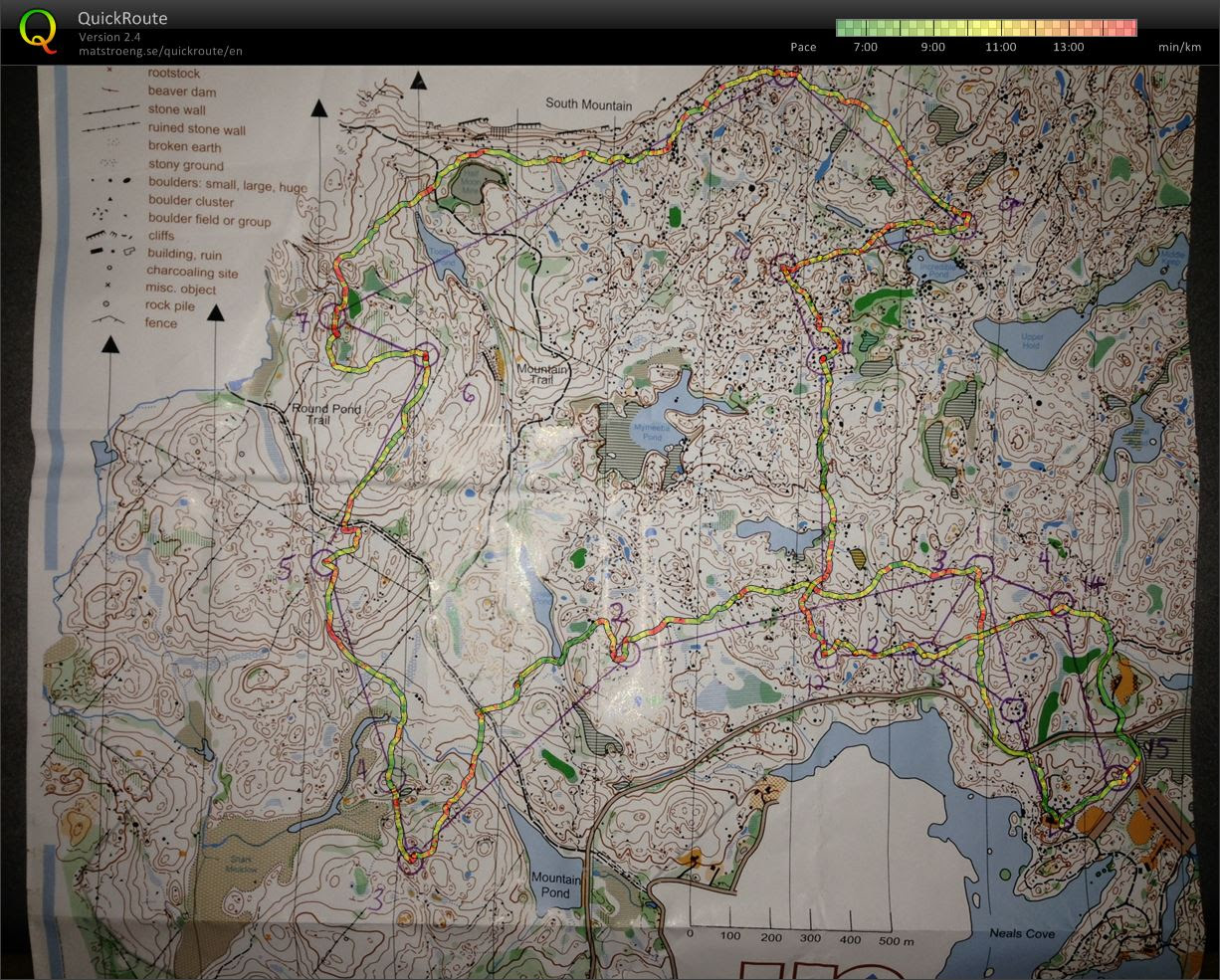 All in all, a totally successful weekend. Super thanks to Up North Orienteers for putting it together, as always it was super valuable to my training and racing experience. I can't wait to tackle the October race weekends now! 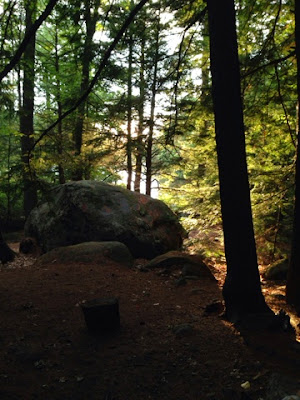 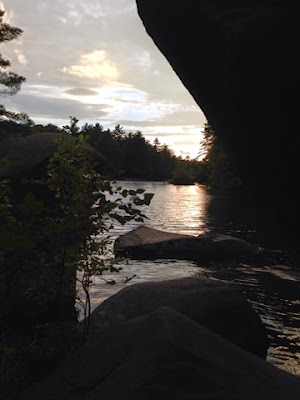 Until next time, Pawtuckaway.  Thanks for having some crazy awesome boulders!
Posted by Alex at 3:08 PM No comments: 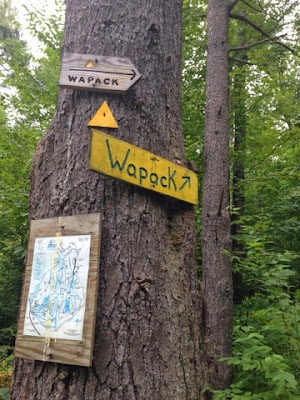 Wapack is a great little trail, accessible and yet remote-feeling, with views and rocks and blueberries and hills and things, and though in a race it's hard to appreciate any of those things, that doesn't diminish the awesomeness of the trail. Maybe there are some trails that aren't made for racing on.  Doesn't stop us from trying.

After last year's slog, I was nervous going into this race with the forecast temperature and humidity - supposed to start out at 66F (dewpoint at 64F) and climb to 80ish, and this sounded like it could make for another unpleasant slog. Between the humidity and a potential knee problem, I didn't particularly want to pin on a number and stand on a start line, but the power of early registration got me to the start line; I'd already paid, so may as well show up. Besides, Ed wanted to test himself against this course, despite my warnings about how it'll eat you alive and shit you out the other end.  Maybe that made him even keener to try it.  I set my goal for the day to just be faster than last year. Stay humble, and finish without further injuring my knee.

Kehr Davis was on the start line, and I couldn't keep up on the hills, so let her go, finding my own rhythm.  The conditions felt marginally faster than last year, since the rocks weren't so slippery, and my legs didn't feel quite so leaden as last year, though they certainly weren't fresh. I slogged up Barrett Mt at my own pace, and Erica Labella (past race winner) was on my heels at the top. She took off running fast as it flattens out, and I discover that my calves needed some slower running to recover, first, so I let her go, too, but thankfully make contact on a downhill. Maybe we can run together the whole way and I'll have a female running buddy! Not today, I dropped her for good on the descent to Binney Pond. Traversing the ridge, with its lumps and bumps and momentum-killing dips and bends and drops, I caught back a few guys who had blasted by me on the first climb, and eventually made my way up to Ted Cowles partway down to Binney. I've spent the past few races running with Ted, so this was good.  We ended up running much of the race together.

I came through the first aid station well ahead of 2013 me, with a 5min buffer. Whee! Filled my bottle and had a gu, then set to chasing Ted up the flattish climb to Watatic.  It's a long grind, but I forced myself to run, and the hill felt shorter than last year.  I hit Watatic again ahead of schedule, which was exciting, and didn't see the leaders coming back up the hill until partway down. I was still feeling sluggish and tired, but also like I was running within my capabilities for the day, so this was encouraging.  Thanks to my bum knee, I took it sort of easy on the downhills; the descent from Watatic is a real screamer when you do it right, but I wanted to escape today unscathed.  Saw Kehr near the turn-around, with a 5-10min lead, so I continued with the approach of running my own race.

Ted and I left the aid station together, and I was able to barely hang on back up Watatic. I high-fived Ed near some of the bare rock, and was pleased to see that he looked totally comfortable.  From Watatic it's a long three miles to the last aid station, and then the real suffering begins, as you go back over the ridge.  I kept the gas on down Watatic, since that's the most runnable part of the whole trail, and there were some more guys coming into view as I hit the final aid station.  I say "final" like the race is almost done - ha!  But, I was 15 minutes ahead of 2013 me, and this was an excellent place to be.  Naturally, I got greedy, and started looking at 3:10 instead of 3:15.  Just push a little harder, a little further, take that extra risk on the downhill...

But then you're hit smack in the face with the climb out of Binney, and I let myself walk the whole way, passing two guys with a steady power hike.  Once up on the ridge, it's a series of false summits, though the map only looks like three peaks.  I was in full suffer mode now, with the sun out and nearly out of water, legs tired and joints feeling the rocky descents with no flow.  I tried to remember to use my momentum, but the mental energy wasn't always there in time.  Finally, I hit the top of Barret Mt, and I had just passed two more guys, so it was a frantic tumble down the hill.  I knew it'd be close to break 3:10, and in the end I didn't quite have the legs for it, finishing in 3:11.  Damn, I know I could have found two minutes somewhere on that course!

I'm totally satisfied with my race, especially given the weather conditions. Those were not PR conditions, but I set a 20min PR, through a combination of good luck, better fitness, and a terrible day last year (sometimes, a terrible day the first time is all it takes to improve the next time!). Kehr ran 3:07, but she also got lost right near the end, so should have been faster. I was 11th overall, with the winner taking 2:33. Ed had a good run for the first 14-15 miles, and then ran out of water and discovered first-hand that the bonk is real...
Results 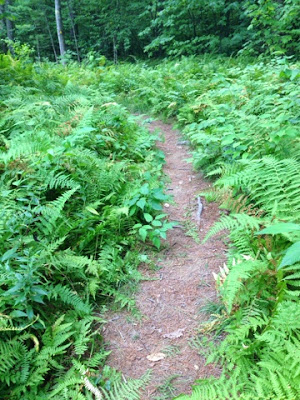 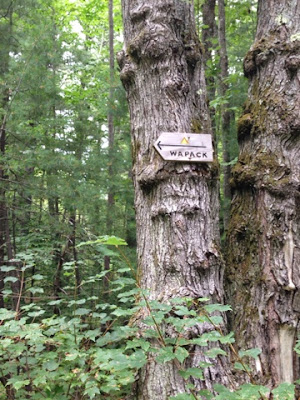