After returning from Sweden, I needed a little time to not think about orienteering. With the US and North American Championships coming up at the end of September, I had a few weeks to get back into the groove of working and coaching, and my plan was to simply do whatever I felt like for training, and let the mind and body recover together.

Labor Day weekend was the annual Kern camp, a ski camp that CSU hosts down on Cape Cod, and it was great. No surfing this year, because the waves weren't really steady enough, but by Monday we were getting the leading traces of a tropical storm, and the waves were big enough to cancel ferries back to Boston, which left us in a bit of a pickle with what to do with the 25 skiers who had taken the ferry to get there. It all worked out in the end, and everybody got home. 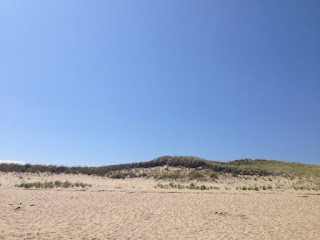 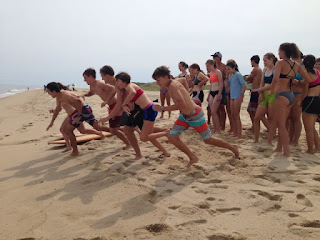 The following weekend was the Pawtuckaway Camping weekend, and we just spent Saturday up there. After a long course in the morning, and then the Wicked Hard Night-O (WHNO), I was pretty toasted by Sunday morning, but I'd agreed to meet my juniors at the Louisa May Alcott 5k. I knew I didn't have the oomph for a proper race, so just tempoed my way around the course, but it still felt like a lot of work. By the time I showed up to the afternoon rollerski practice, I could tell that I was in a bit of a hole, physically. The problem with not having a training plan is that then I just do anything that's offered, and end up overreaching. Well, four days to recover before the US Champs at Ward Pound Ridge, over in NY, and I did pretty well getting myself to a better place. Mentally and emotionally, I was excited to go running in the forest, and physically, though I didn't feel my bounciest ever, I felt a lot fresher than the weekend before! 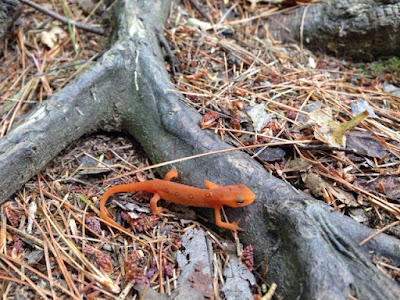 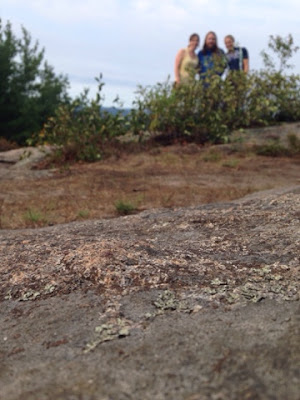 Becky, Ed and I found a rock to stand on 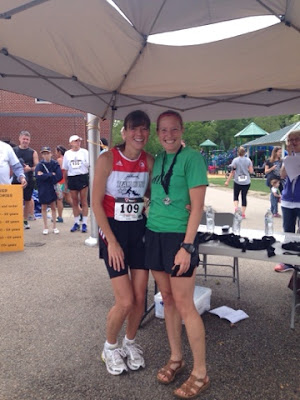 Second in my age class despite not a killer run 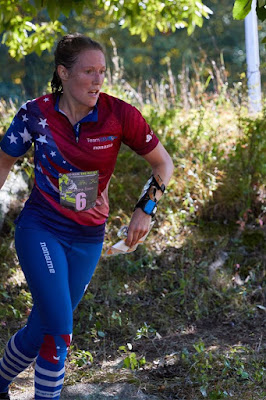 Saturday's race was a long distance World Ranking Event, against the usual crew plus Ali, back on the east coast for a long-ish trip involving the US champs, North American Champs (NAOC), and then her wedding. The forest at Ward Pound Ridge was gorgeous - typical older-growth deciduous Hudson Highlands terrain. There was a little bit of rock on the ground, but mostly it was just FAST. I started out aggressively, but maybe a little too aggressively, and I lost some steam after the 5th control. From there, we entered a rougher part of the forest, with more mountain laurel and rock, and I had a bit of a low point, losing confidence and moving slower. By #9 I'd kicked myself back into race mode, recovered from that dip, but I had lost too much time. Despite a very strong finishing loop, I still finished about a minute down on Hannah, and nearly six down on Ali. I was totally exhausted, having worked those final hills with everything I had in me, and I was starting to worry that maybe I wasn't as recovered as I hoped.

That evening, the Orienteering USA Annual General Meeting went on, and a group of young-ish candidates who had banded together to run for the OUSA Board of Directors with the platform of "things need to change" managed to get ourselves elected to the BOD, and the AGM plus the following board meeting was a totally restful six hours of my evening, trust me. Thankfully Barb called in a pizza near the end of the meeting, because there really wasn't much opportunity for dinner otherwise. I can tell you I definitely have my work cut out for me, now.

Sunday dawned humid and icky, but luckily I'm used to this sort of weather by now. The course was a lot shorter, and hopefully with less climb, too. My goal was to stay aggressive the entire race, but to keep smiling, because you don't get forests like these very often - such a treat! Right off the bat, I made a stupid mistake to #1, drifting too high on the slope despite my internal spidey sense yelling at me. Like that, I'd dropped a minute. D'oh! That seemed to kick me into gear, and my focus narrowed to the task at hand. Time to apply some speed. I was focusing on really nailing the downhills, especially, since yesterday I'd felt like some of them I was being a little too cautious. No reason not to treat off-trail terrain any different than a trail, just sight where you're going to first! 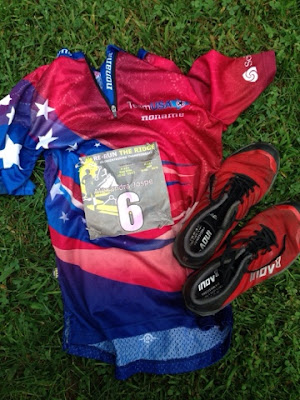 By #7 I could tell I was having a good run, as I was passing masters runners and West Point cadets and moving really well. On the long leg to 10, I knew these were the final hills, and I was at the point where I was bribing myself to keep running - just run for 100 strides and then you can walk for 10! I had a plan for each control, and while forests with this much visibility make it easy to nail controls, you still have to be able to keep your head on while moving as fast as possible. I distinctly remember thinking to myself at one point "soon, you'll be at an uphill, and you can read your map THEN," only to immediately counter that with the realization that NO! I have to keep reading my map while moving THIS FAST, being THIS out of breath, and being THIS exhausted. It worked, and I kept the aggressive approach to my navigation right through the end, finishing about three minutes ahead of Hannah and about a minute back of Ali. That was enough to move me in front of Hannah for the overall championships, so now I'm a silver medalist! Woo!

The weekend of fun wasn't totally finished. Ed headed home with some local friends, and I stayed out there for a final race, a team sprint relay at Mountain Lakes. Teamed with Ali (go Team Giggles!), we had nothing on the line but our egos, and both elected to go a little easier in order to start recovering for NAOC. Super fun to run a relay, though, with maybe 25 teams out there. We both made some mistakes, and combined with a lower speed, all the elite men and speedy masters beat us. But, we definitely had the best sparkly pink tiaras. 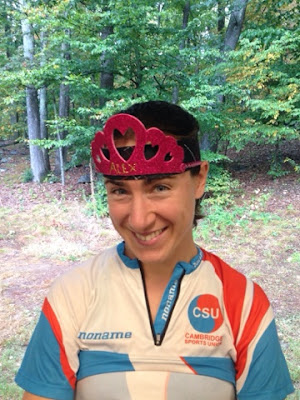 Monday night we headed up to Sunderland, for the second running of this year's Mike's Corn Maze Orienteering. Hosted by Peter Gagarin, this is pretty much the most fun orienteering event EVAR, even including those awesome forests at Ward Pound Ridge. Peter is totally in his element hosting a ridiculous event like this, and over the course of three races there was endless laughter, mud, and cutthroat competition. I managed to eke out the win in the "sprint shuffle," but Ali got me in the "classic" and Evalin got me in the "night." So much fun! 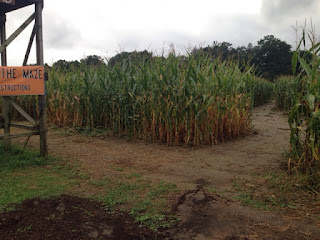 Next up is NAOC! Time to bring that aggressive orienteering to the next venue!
Posted by Alex at 6:52 AM No comments: