The last three Eastern Cups have gone by in a blur. We were at Rikert the weekend before Masters, and then Craftsbury the weekend after. I only did the skate race at Rikert, knowing I'd be needed for waxing at the classic sprint. Plus, conveniently, I don't really enjoy classic sprinting the way I enjoy skate sprinting. Fun to watch lots of my skiers qualify for the heats and move through them with aplomb.

Rikert
Sunday's individual start 10k was one of those races that's just sort of meh. I didn't have good energy, and made up a lot of my time on the downhills, which were icy and sketchy enough to scare other people. Really enjoyable and ripping fast skis. 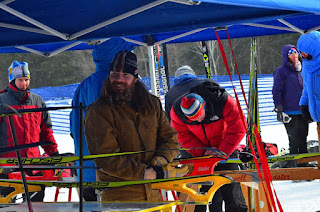 Ed on the wax team, at both Rikert and Craftsbury ECs.

I started third bib. I wanted the first lap to feel in control, so consciously backed off on some of the hills. I could definitely feel the accumulated fatigue from last week at work and yesterday's classic sprint insanity, and my quads didn't really like the idea of going up hill. The downhills were insanely awesome, I was carrying so much speed through the bottom of the hills it was just not fair. I had a pretty empty course through loop 1, my 15-s girl visible and slowly getting closer. I caught her on the long climb, and stayed behind for a bit before finally going around at the top, to give myself clear snow before the downhills. That worked and I opened a bit of a gap, passing my 30s girl too.

Second lap I sort of wished the race were over already. I let myself push harder on the uphills, and my legs protested harder. I came through just after a Mansfield gal was starting, and that was a nice motivation to catch her. Some traffic this lap, but I was still finding space on the downhills to do my thing with confidence. I was on a such a high, just knowing that everywhere I went, I was leading the race. Go me! But that didn't erase the fatigue.

Third lap I was totally done. Tried to keep moving but I was dropping seconds right and left. Skidded a little of the icy corner at the top of loop 1, but still came out of the hill with a ton of speed. Had to do a lot more V1 up the long hill on loop 2, just unable to keep the speed up in V2, arms and shoulders and quads and hips just totally trashed. I managed to put in a pathetic little surge over the top of the final hill and keep my space, avoiding taking out the girl who was on her butt on the next icy corner, and did what I could into the finish.

Craftsbury
The third weekend of Eastern Cups was supposed to be at the Trapp Family Lodge, but they didn't really have enough snow for that. So, the backup site was Craftsbury. 5k classic on Saturday, and 10k mass start.

I started 15s behind Lily K of Harvard, and my goal was just to enjoy the day and ski well, no shuffling. I felt pretty fresh in my warmup, which was also a welcome surprise - last week was crazy, and I was expecting a lot more accumulated fatigue. Skis were great, and I had closed a lot of ground to Lily over the first flattish km, and actually closed the gap on the first B climb after the sleeper hill. Sweet. Forced myself to stride the steep bit even though that took a lot of arm wax, and that was what got me ahead of her.

Skis were ripping down the long descent, and I recovered nicely. Up the A climb I kept it light and swingy, letting Lily pull ahead of me and pace me up the hill. Still not really digging deep, and I recovered well again on the long descent before Screamin' Mimi. Heading up, Lily attacked from the bottom, and I let her drift ahead again. I admit, I did a little shuffling through the striding zone. Then we turned the corner and I obeyed my directive I'd given the kids in the course tour, and really punched it over the top. Slid past Lily and my 30-second girl, and gave it some good hard double poling to gain momentum.

Some recovery down the gentle S-turns, and then remembered to properly stride past the cabins. That was really the only part that felt like real work; I probably left a good 15-30 seconds on course just through a lack of give-a-damns, but that was fine. That was fun, and skiing it at 10k pace instead of 5k pace greatly upped the fun factor. 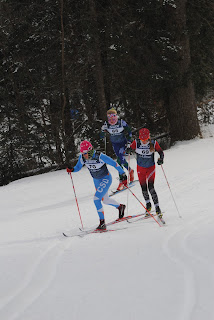 Huh. The tracks aren't going that way... Guess I wanted the other side of the trail? 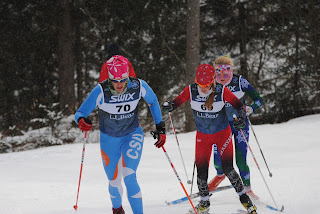 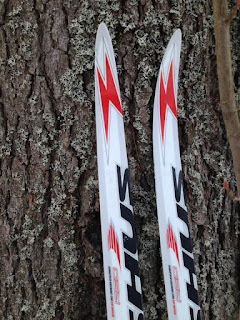 Fatigue caught up for Sunday's race. I did a few too many course tours, but that's my favorite part of race day, so I can't blame me. I love mass starts, so no way was I sitting this out, but two hours of warmup was a little on the long side.

I had a good start spot, in the third row, but as we went off I realized just how much of a hole I was in. It felt like the girls were all going so fast, and I was having to work so hard to keep up even on the flats and downhills. When we finally got to the first little hill, it was a relief to do some V1, and I realized I was at the back of a pack of around 20, already with a gap behind me. I stayed relaxed up the first real climb, just taking my time and keeping the tempo low, and that was enough to keep me in contact. 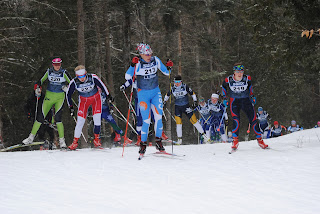 Down the long hill the first time I was behind Lillian from SMS. She skied it well, and I wasn't closing any distance. Damn. Things started to splinter a little heading up the A climb, and I was with Laura and Lillian and a couple girls peeling back from the main pack. I knew this was the decisive moment, and if I wanted a reasonable result, I'd have to pick up the pace and go with them. But I just couldn't do it, calves were exploding and quads were heavy and arms weren't working too well either, just feeling sore and heavy. Well, ok. I guess it really is the sort of day where even staying in a tuck feels like too much effort.

I stayed behind Lillian and Laura up Screamin' Mimi, did the slight push over the top, and then drafted them across the stadium. Chilled out up Chip Hill, even though there were some girls in sight. Up the first B climb I finally started to feel a little better, and noticed that the long strides were working for me. There were some GMVS girls straggling ahead of me, and I decided I wanted to catch them. I was with Lillian again down the hill, but then along the bottom of the course I started doing more V2, and that was both more efficient and faster than the GMVS kids.

I passed Lillian finally on the steepest point of the A climb, and started to hunt for real. There was a Ford Sayre girl closing on me, too, but I was mostly concerned with what was in front. I think what was happening was that my skis actually felt fastest on the uphills, which is why I was feeling good there, because the snow was chopped up into more of the granular stuff. Anyway, I reached the corner of Screamin' Mimi at the same time as the Ford Sayre girl, and didn't fight her for the position; I have no skin in this game. But we'd just closed on the GMVS girls, and I wanted to get by them, and now there wasn't space. Grr.

Into the next uphill I tried to get by, but the FS girl was flailing all over and totally blocked me out again. Now I was getting frustrated. Don't make me get aggressive, you won't like me when I'm aggressive. Tried for another pass just after the downhill, but she blocked again, I don't think intentionally, and one of the GMVS girls started a kick, and I was stuck behind the other two. Finally the FS girl completed her pass, and I took the long line around the corner to get past GMVS, but geezum that was annoying. I suppose this is why most people don't like mass starts. Anyway, cruised into the finish a few seconds back of the GMVS girl, for a reasonable race.

Could have done with a little more oomph and possibly a few more give-a-damns, but it was worth doing and I enjoyed myself.

Silver Fox Trot
The final weekend of Eastern Cups is always the Silver Fox Trot and the Cheri Walsh Memorial. The Silver Fox Trot coincided with the Dartmouth Carnival, which made for a really deep field, pretty awesome. It was another of those two-hour warmup sort of days, and I will admit I wasn't feeling super fresh on the start line. My calves were an issue today, really tight and started to explode on the final few km.

The race itself was pretty unremarkable. The snow conditions were glazing and icing, really difficult balance conditions that aggravated my strained calf, and I felt like I wasn't skiing particularly smoothly. I caught up to the UNH girl who'd started 30s before me by about the midway point, but struggled to generate much speed on the gradual stuff that comes in the final hills, lower legs in a lot of pain and not cooperating. I skied the S-turns well, but it was too little too late. Overall it was a fine points race, if I cared about those anymore, but the result was nothing to write home about.

I didn't race the Cheri Walsh; I love that course and I love classic skiing on that course, but with the predicted shitstorm of weather, I felt better working to get the right wax for our skiers. I'd say we nailed it, so that was effort well spent. 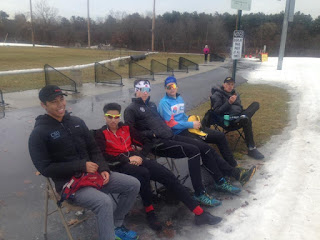 Pretty PRO way to watch your teammates race. This is from the Massachusetts State Qualifier race, where the snow was rapidly disappearing. We put nearly every CSU kid onto either the U16 championships team or the Eastern Highschool Team. 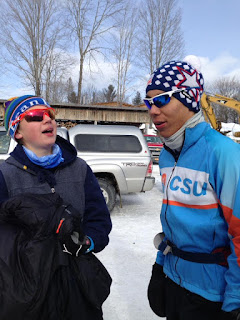 So, the trick to winning the race, is that you have to get to the finish line before anybody else does it. 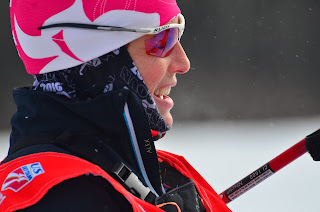 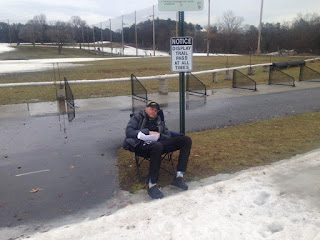 This trail pass checker is asleep on the job. Also, ski race coaching days are hard. 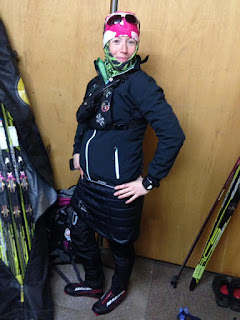 When it's cold enough to double puff, you also need a puffy skirt. But boy is it nice to have an indoor waxing space!

Now we're into Championship season - U16 Champs, Junior Nationals, and Eastern HS Champs. First up, I'm the course setter for the Ski Orienteering World Masters Champs, at Craftsbury, so need to make sure that goes off smoothly. Woo!
Posted by Alex at 1:37 PM No comments: