The third race of the unofficial orienteering triple crown, the Blue Hills Traverse is traditionally the last Sunday before Thanksgiving. I was in a position to win the overall triple crown, given my victories in the Billygoat and the Highlander, if I could just hold it together for this final race. The Billygoat had been a hard win, barely eked out ahead of my US Teammate Hannah, but the Highlander was more of a survival game, with Kseniya setting the course (and thus not running it) and Hannah out with a broken wrist. Right now, we are the three US Team members in the northeast, and it's been great to challenge each other at races. For the Traverse, Hannah didn't make the trip, but for the first time I would be battling Kseniya in a long race.

The weather cooperated with my desires on Sunday morning, chilly but not truly cold, somewhere in the 40s, with no rain yet. I noticed during my warmup that I had a spring in my step, and adjusted my mantra into an aggressive one, out to win it or collapse trying, and take some scalps among the men. I'd had a good month of training, finally, and was feeling confident and ready.

We took off speedily, and I quickly found a comfortably hard pace, behind the speedier-starting boys. The first map consisted of a lot of trail running, but luckily that wasn't aggravating any niggling injuries that I've been trying to kick. I spent most of the first four controls chasing Bo Nielson, a very fit master runner who I've battled with before. Knowing that I probably had the advantage of trail speed over Kseniya, I was pushing this part of the race very hard, wanting to put as much distance as possible between the two of us on the non-technical controls. She is a master in the forest, so I knew she'd be closing that gap as soon as we had to actually navigate.

The race had been pretty flat for the first four controls, but leaving #4 things angled upwards. I continued to make a conscious effort to go faster, and finally passed Bo, and started to catch glimpses of a CSU jersey ahead - Ari! I caught him and 3-4 other guys that I didn't know at control #5, but then we had some more fast trail running, and they pulled ahead. I was starting to notice the pace, and the fact that I haven't done any hard straight running in a while. My shoulders were cramping from the effort of breathing, and my hamstrings were starting to protest the speedy strides. Uh oh.

I finished the second map trailing behind a pack of 5-6 guys, that included Ari and Ian, from CSU. Naturally, I wanted to beat them all, but there's desire and then there's ability. I slowed down a bit on the two butterfly loops out of the drinks control, in part because I'd nearly choked to death on some gatorade - air in one tube, liquid in the other, dummy, you've been doing this your whole life! Luckily, my brain took back over, and in a good mind-over-matter moment, I wound back up to race pace, back into the aggressive mindset. I'd seen Jordan, the men's leader, just one butterfly loop ahead of me, so I realized that this pack of Ari and the other two guys were probably the chase pack. As I was finishing my second loop, I saw Kseniya starting what I hoped was her first loop, which spurred me on. I didn't have much buffer, but it was enough for now. 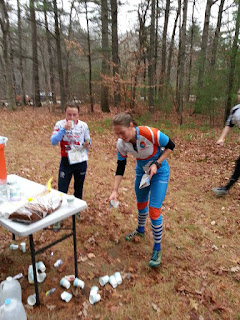 Meeting with Kseniya while choking on gatorade

Unfortunately, I lost two of those buffer minutes on the way to 17 - I'd pulled to the front of the chase pack, but momentarily lost focus and lost contact with the map, leading to much confusion and wandering about in a low-visibility area. I think this is where Neil Martin got ahead of us, as three others of us wandered. Mad at myself for that lapse, I pulled it back together, only to lose another 45 seconds at 19. What is this, it's almost like I'm tired and making mistakes! Even with that mistake, I'd managed to pull away from two of the guys in the pack, because of more woods-running (yay!), and I caught back up to Ari at 21. He was walking, having just twisted his ankle badly. It was a reminder to me to keep moving carefully - we were traversing the side of a mountain covered in loose pointy rocks under loose leaves - I did not want to injure myself now, so close to the finish. I finished traversing the slope, and popped out at the bottom of the ski slope, in the clear, as far as I could tell, from any other runners. Sweet. Two more controls, and I kept the gas on, worried about a late-race charge from one of the men behind me, and then I was at the finish, in third place!

Kseniya finished close behind, having matched or beaten nearly all my forest splits. It was a good thing I'd pushed the trails as much as I had, and I was lucky we'd had so much trail running. I was really pleased to have finished a long race feeling strong and aggressive the whole way through. And I won a giant gingerbread cookie! 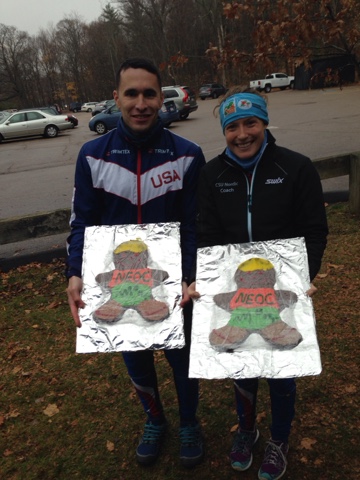 This marks the second year I've swept the orienteering triple crown. These long races are a blast!
Posted by Alex at 2:50 PM No comments: