Two weekends ago was the US Ultralong Orienteering Championships, in the Bay Area of California. I had to be out there for a board meeting anyway, so figured I'd do the races, maybe work a few days from our Oakland office, take a break from the northeastern spring ski season. My preparation for anything orienteering-related has been somewhere between minimal and non-existent. That's the whole point of being retired. However, I'm way too competitive with myself to be satisfied with anything other than winning the race, so my plan was to stay super focused on the process of finding the points, and hope that my running training will suffice to get me around the course in a speedy manner.

The first day was an "extended" middle distance event, around 6.5km straight-line, at Pt. Pinoles park in the east bay. I'd been in town for 24 hours already, working out of my company's Oakland office and staying with a friend in San Francisco, and it had been impossible not to go for exploratory runs any chance I got. Nice to run somewhere that isn't locked into winter, and when you've got jet lag on your side, mornings start nice and early. So I wasn't totally rested, but the course promised to be relatively flat. It had been raining a lot, which meant that all the grasslands at Pt. Pinoles were totally saturated, feeling very much like the Swedish Squish (tm) that I hated so much last year at WOC. As an early starter, none of the grasses had been knocked down yet, and I felt like I was some sort of jungle explorer, pushing my way through these deep wet bogs all alone.

The navigation was relatively trivial, and I made it through without any mistakes of note. This was surprising, as I'd expected to feel a lot rustier in my technique, but I guess when you can see so far, with such a nice network of (totally waterlogged) trails, there isn't much room to get lost. I made one route choice error near the end, which lost me 36 seconds, but overall I was pleased enough with the race, especially given my lack of top-end training lately. I ended up 2nd, 45 seconds behind my old teammate Hannah, who is also semi-retired, so it was kind of nice to see that we are still as close as we ever were when we were both serious. 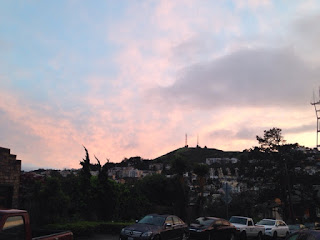 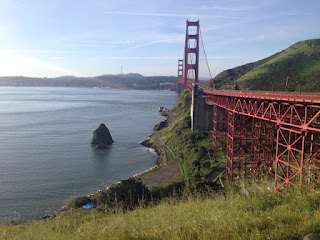 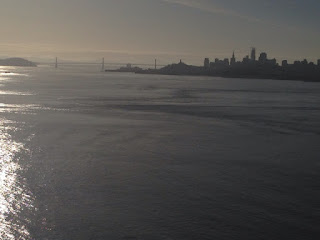 Day two was the actual Ultralong championships. With a name like "ultra," you expect something long, but in reality the straight-line distance was only 12km, so it's kind of a misnomer. But the event was in Briones Regional Park, which had plenty of hills (and cows!), so distance takes on a new meaning there. All the route choices in a place like that are about how to minimize climbing, and, in my case with my bad ankle, how to minimize the amount of time spent running through cow pastures. Cows leave big holes in the grass, and my ankle stabilizer muscles were not ready to deal with these holes, leading to a pretty slow pace across any sort of field, which is frustrating, because of course in those fields I could see exactly where I wanted to go; I just couldn't get there fast enough. Of course, when you're not in a field, you're going through the forest, which is filled with poison oak. And poison oak is orders of magnitude worse than poison ivy. People tell horror stories about poison oak.


The Ultralong was a mass start, and my goal was to beat Hannah. That was pretty much the only goal. I didn't know where we'd stack up in terms of fitness, but I could feel my ankle stabilizers tweaking out with every step after Saturday's run, having not been used all winter, so this could get interesting.

Hannah and I were together for most of the race. I was a little ahead for the first five controls in the forest, and then we hit the first butterfly in the fields, and I dribbled away about a minute to Hannah, incapable of running with any degree of speed through the lumpy fields. My ankle hurt a lot by the end of this butterfly, which helped with my decision to stay entirely on trails for the long leg to 14. I had been behind another woman after the first butterfly, but I ran hard on the trails, and got ahead by a bit, thinking I was still chasing Hannah. She took a straight route, though, and dropped 3min to me because of all the climbing. I was clearly running faster on anything trail or forest, but she was crushing me in the fields.

I executed the next long leg to 16 pretty well, but those were kind of stupid controls - dropped us down a dangerously steep reentrant just to essentially come back up. I did not enjoy the 7min of climbing hand over hand through poison oak at face level with every step sliding back a foot or more. That was stupid.

The second butterfly was also in cow fields, and I dribbled away another 40" to Hannah on this. I had a gel, and the caffeine boost helped my (poor) decision to take a slightly straighter route on the next long leg, thinking it was too far out of the way to backtrack to the trail. This was a 1.5min mistake, and gave me another hands-in-the-dirt climb through poison oak. I was telling myself to just trust myself, I did fine, and then I saw Hannah running along on the around-trail well above me already. Argh!

I ran hard to close the gap, and got it by sledding down a steep grassy hill on my ass. That was the most fun part of the course. I basically was the bowling ball and Hannah was the pin, I may have slammed right into the back of her giggling the whole time. But there was only one sledding track, and trying to run down a hill that steep was just ludicrous.

Then we were mostly together the final controls. I took a different/worse route to 26, closed the gap again to 27, and decided on the way to 28 that this was my last chance to play the one card I had left - had to get enough in front that she couldn't run past me in the final cow fields, because it was predetermined that I would suck there. I felt like I still had plenty of fitness to burn, but I was incapable of moving fast across cow fields, so it had to happen on the trails or in the woods. I gained about 20 seconds on 28, and another 25 seconds on 29, and was feeling like maybe I had this in the bag. Then somehow I ended up in some nasty dark green thick vegetation on the way to 30. Hands and knees, sometimes elbows and knees, through poison oak and other scratchy vegetation. I was pretty pissed when I finally emerged. Hannah got stuck too, but she got less stuck than me, and punched first by maybe 5s. After 2 hours, and plenty of different routes, we're still together. That's actually kind of awesome.

Then my ankle pretty much gave out on the way to 31. Too many holes from the damn cows. I basically walked/limped it in down the hill to the finish, in a pretty big grump. Mostly because of the green, because that was where I lost the race, but more because I just wanted to be able to run without my ankle hurting. This was supposed to be fun, but reality didn't quite stack up. 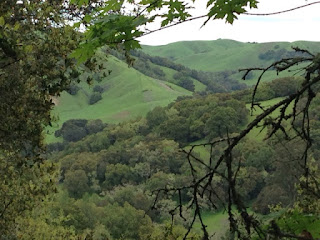 From a distance, it all looks so lush and beautiful. 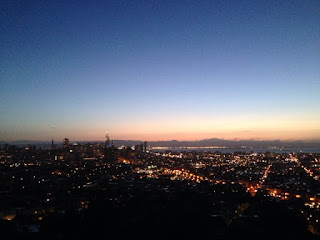 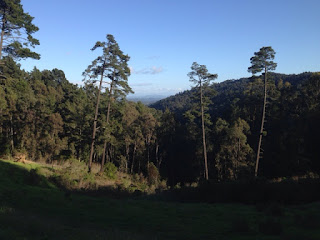 I found some green space to explore before hopping onto a red-eye to get home. Very nice to run among the trees before spending hours in traffic and airports and buildings.

I spent the next week dealing with the worst poison oak reaction. I thought I'd quarantined clothing well, but evidently not well enough, and getting all those cuts on my arms from crawling through the poison oak at the end of the course was the nail in the coffin. By the time the rash was covering about 20% of me, I went to the doctor, but it was pretty unpleasant.

Back east, we got an April Fool's snowstorm, so before I knew it, I was playing in the snow again. No poison oak there! 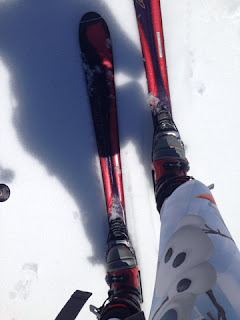 Back to what I know - Olaf the snowman tights earning turns on a sunny spring day.
Posted by Alex at 8:20 AM No comments: