In the three weeks since Soapstone, life went a little crazy around here. I write that like it's all factors out of my control, but I should know better than that - everything is a choice, and I'm really good at making choices that emphasize the short-term endorphin rush at the expense of longer-term health. 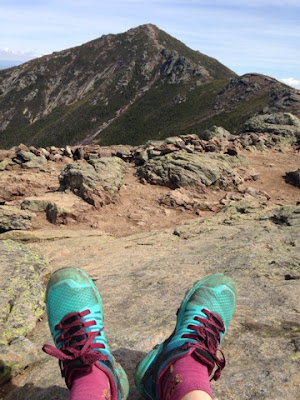 I've been whining about how getting old is cramping my race style, and it's true. Not so much in the way it makes me slow, but rather in my ability to recover from hard efforts; what used to take one day of recovery is now taking two, or three, or all week. I could choose easier races, or do fewer races, or try less hard. Yeah, right. So, because my brain refuses to admit what my body knows, I followed Soapstone with a heavy week, pretending like I'm still 18 and can do two quality workouts back-to-back and a speed workout embedded in a lot of volume. In the midst of this, my Honda shit the bed, about 100mi north of home, on our way north to hang out with my parents for Memorial day. Have you ever tried to rent any sort of vehicle on zero notice on a long weekend holiday? I don't recommend it. 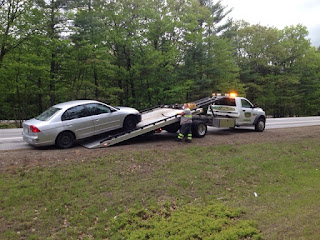 Dang. The oil is supposed to stay in the engine. 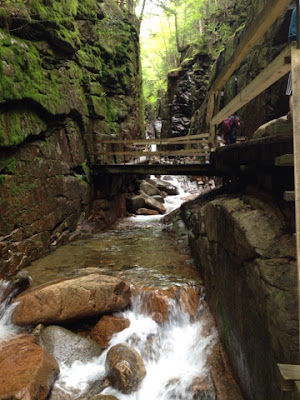 Beautiful day for touristing along a mountain stream at the Flume 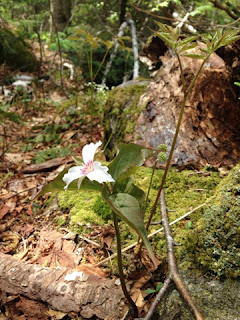 Despite being car-less, I had a lovely weekend with my family, involving a very relaxed hike around the Franconia loop that we love, and then a variety of shenanigans to get both Ed and myself and my poor dead car back to Boston. It all worked out. So, the next week was filled with a lot of visits to various car dealerships, because we decided a new car made the most sense. Yikes, big adulting decisions to make! Naturally, I picked up a cold that week, because not only was I trying to shop for a new car, work a full-time job, and organize an Orienteering USA coaching clinic for the weekend (and also a four-day orienteering event the following weekend), I thought that miss Wonder Woman could train through this. Not so much. 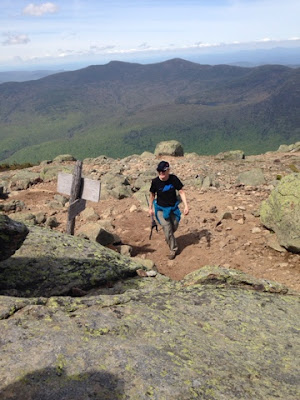 My mom, the original Wonder Woman. 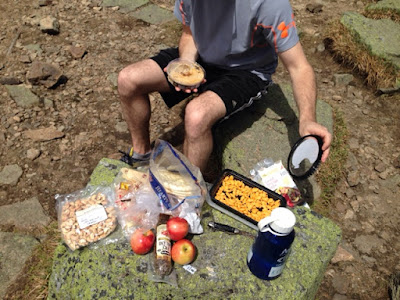 Picnics done right meet two requirements: 1) there are goldfish; 2) they're eaten on top of a mountain. 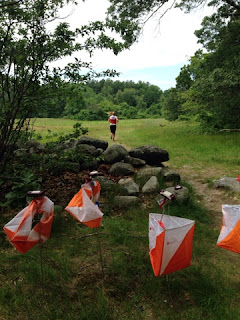 So, anyway, the coaching clinic went well, I took enough rest days that eventually my lungs functioned again, we got all the exercises and races and lunches and pizzazz sorted for the Sprint Camp weekend, and I bought a car, all in the next week. Sprint Camp was a lot of fun, and the people who came really enjoyed themselves, which totally makes it worth the effort to host, but I was pretty shattered by the end of it. Enough that by the time I joined CSU on the track the following Tuesday, I only made it through a single interval before realizing this was a bad idea (see? sometimes I make smart decisions). But of course, because I'm an idiot, when my juniors lined up to do a June time trial of 3000m at the track on Thursday, I was like, yeah, I'm ready for this! I'll join you!


Nope, that wasn't a good idea either. 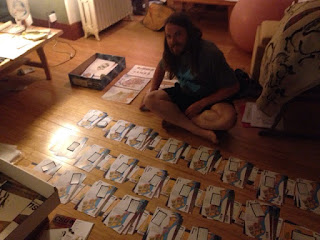 Setting up for Sprint Camp. 28 maps each might have been excessive.

So, by the time Saturday rolled around, and I took a bunch of kids (in my new car!!) out to western MA for a training weekend, the fact that I did a 2-hour rollerski, a game of ultimate frisbee, and a game of wooded capture the flag the day before the Greylock trail race didn't even make a difference - my oomph bucket has been near empty for three weeks.

Oh my goodness is that a lot of paragraphs about excuses. tl;dr: Life has been kinda nuts, and I'm tired. 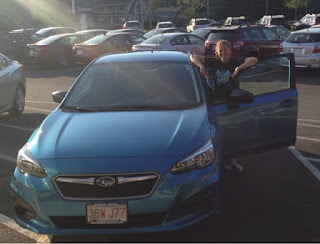 So shiny. So flashy. Need some mud, asap! 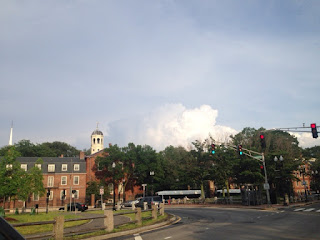 Some sweet thunderheads on my bike commute. Thankfully they'd already passed through...

Greylock half marathon
So even with all those excuses, there was no reason to miss this race. It may not play to may strengths (as in: lots of uphill and non-technical downhill), but the trail race works perfectly as the second day of a mini-training camp for my skiers, that we call an adventure weekend. Just getting them out of Boston is good for the soul. Saturday we were rollerskiing, cliff jumping, strawberry-eating, playing games, doing yoga, and generally having fun, and then Sunday was race day, with most of the kids (and accompanying parents) doing the short race. 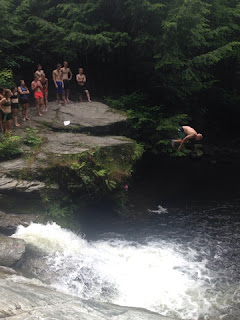 Those cliffs are a good height - not so high as to be scary, and plenty of water below. 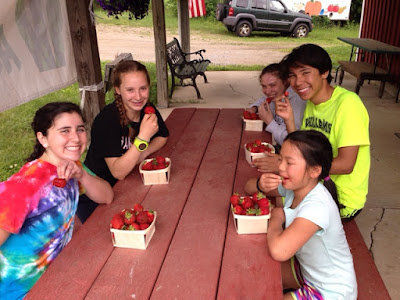 What it's actually all about. 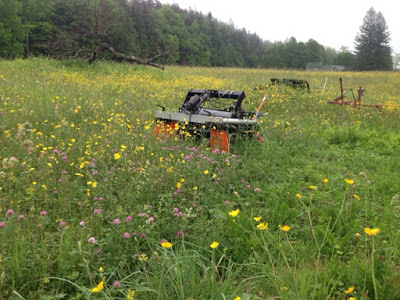 We stayed at Notchview overnight, and they hide their grooming equipment in a field of wildflowers.

This was my fourth trip around that loop, and I was hoping that it would be a good day, because I'm ever the optimist. But it was humid, so I knew times would be slow. My process goal was to pace myself well up the hill, run the downhills hard, and enjoy myself along the way. It was sort of a weak field this year, but I didn't let that fool me. 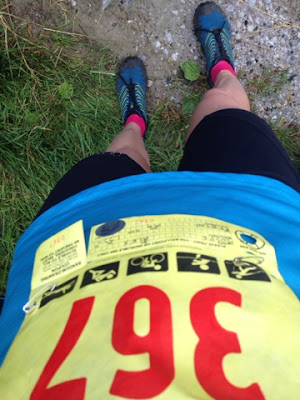 The big hill out of the start was good, actually. I started comfortably, sitting in maybe 7th for the women, jogging where I could, and my legs didn't feel *that* bad. When we started to hit the steeps around 2mi in, I started to pick people off, and by the time we got to the AT I had moved into 5th, with 4th place in sight, and passing men. I usually get passed by men on the climbs, so this was actually really good. I hit the top about three minutes slower than in past years, but feeling really good about myself.

Down the hill as fast as I could, and here's where I started to notice that I just wasn't recovering the way I should be. Usually the downhills, even at breakneck speed, bring my HR down into zone 3 or even 2, but I was still hovering at or above my LT. Not good, because I had 8 miles left. I kept trying to slow down, trying to recover, and I just couldn't. Bad omen. But, I had moved up into 2nd place on this descent, and was starting to think that it was just a tough day for everyone, and I would be ok with a slow time if I netted me a top 3.

But then Jones Nose kind of climbs for a while, and I just had nothing. Sarah passed me back, Michelle got me shortly thereafter, and I was in no-man's land, listening to my breath and wishing I could put out some power on the short uphills. I managed to stay happy, but I was suffering. Caught back up to Michelle and Sarah down the nose to the aid station, but I knew that was to be short-lived, as we had that never-ending jeep trail climb left. I managed to keep running, but there was just no power to be had when I asked for it. No cramping, just no strength. Totally a survival game, and I was starting to question why I do this to myself. Finally the trail pitched downhill, and I kept repeating to myself that it's not over til it's over, but I knew that this downhill just wasn't technical enough for me to pull back Sarah or Michelle. Passing a group of my skiers with half a mile left really raised my spirits, they're such an enthusiastic bunch, and the cheering was helpful. That was a high point, and then getting to the finish and sitting in a stream, that was also a high point.

The low points... well, it sucks to run slowly, especially when you can't turn off your brain from being a competitive jerk. I didn't have the legs I wanted, and I spent five paragraphs explaining to myself why, but it doesn't take away the sting and the self-confidence-shake of "maybe I'm just not fit enough."

Arguably, I should have skipped Greylock, in favor of resting a bit for the Westfield Half Marathon this coming weekend. With the Quebec City marathon looming as a potential BQ, I should probably have prioritized the half a little more, but that doesn't have any mountains in it... so where's the fun there?

Looking forward to the next adventures!
Posted by Alex at 1:57 PM No comments: