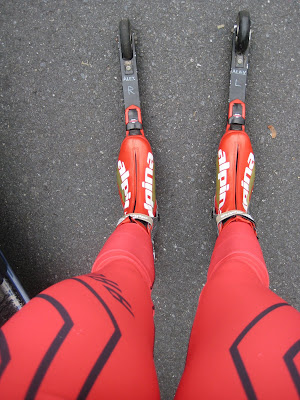 One of the great things about being an Alpina-sponsored athlete is that Dorcas sends me new boots each year. I try to tell her that my old ones are still fine, but then she says I didn't rollerski enough. Not that I'm complaining... This year's boots just came, and after a short test drive, I'll freely admit I like them a lot. I do miss the heel-tightener-thing that was on last year's model, but it appears that they're going for lightness this year. Possibly at the expense of warmth, we'll see how that works out. I guess thats what overboots are for. My feet are probably the ultimate test of whether a boot is warm enough.

The coolest thing (other than the logos) is that the boots are waterproof. They breathe, too, which is a lucky thing. I'll admit I was worried that they wouldn't breathe when I found out they were waterproof, but there was no need to fear. How waterproof, you ask? Well, lets just pretend that I was peeing behind a tree and I may have peed on my foot a little and it just beaded up and rolled off. And then when I dipped my foot in a stream (to wash off the possible pee particles) my foot didn't get wet. I'm psyched to see how awesome this feature is in those sloppy late-season slushfests. Or just at Weston in January.

The other cool thing about these boots is just how light they actually are. I don't have a number for you (but I bet you could look that up somewhere, like at Alpina sports), but they're really light. Supposedly, the cuff is made out of titanium and carbon fiber. Those are words to make road cyclists ooh and ahh. The sole is pretty thin, too, which is a good thing, because it puts your foot in even closer contact to the ski. Or rather, binding. Whatever. Classic skiing in these things is like you aren't even wearing a ski boot, you feel that connected. I can't wait to try them on real kickwax instead of rollerski ratchets! 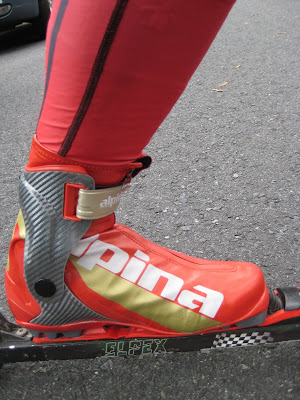 admire my sexy cankles in their shiny new boots. Complete with all sorts of gold bling. You know you're fast when your boots have bling!
Posted by Alex at 9:56 PM

Hey Alex, do you know of any orienteering classes in the area that I can take, I figured that may be the best way to learn how to effectively read a map. I "know" how to read one already but I wouldn't bet on myself if my life had actually depended on it :P

I don't know of any orienteering classes, generally if you show up to a meet and say "I'm a beginner", there are a lot of people hanging around that will show you the tricks of the trade and send you out into the woods on an easy course. NEOC is having a meet this Sunday at the Blue Hills, I would recommend going and trying out the white or yellow course if you have time (and interest). Its pretty fun.

Those are hella nice. I wonder if the corporate powers-that-be would trade a pair of 1991 (or so) classic boots - lime green, bright purple, a lighting bolt/fadeout effect along the zipper - for a new pair?