I've been traveling for 22 hours and I'm only in London...

Around 2pm Sunday, I piled into Neil's frigid car with Kat and Boris, and started my trek homeward. The car went to Uppsala, a bus took me to the Vasteros airport, a plane took me to England, where instead of landing at Stansted, it landed at East Midlands, because there was "heavy snow" all over southern England and Stansted and Luton were closed. There was a promise of buses to take us back down to Stansted, but after waiting almost two hours for my skis, I realized that I would never make my 10:45am flight from Heathrow to Boston if I went with their plan, so I shelled out more money for a 4.5-hr bus ride to Heathrow airport, arriving some time around 8 in the morning. At that moment, my flight to the US was still a go, so I waited around, napping with my ski bag as a pillow, until they cancelled it, at which point I waited another hour for a cab (the London buses were not running, and the circle line of the metro was closed as well, meaning a cab was the only way to get to my grandfather's house). 50£ later, I was finally some place friendly and warm. Supposedly, I get to go home tomorrow morning. We'll see if they've cleared enough snow to open the airport back up by then, I gather London hasn't had real snow like this for eighteen years, so they're understandably a little slow in response.

Last Friday and Saturday were the last two races of the Nordic Open Champs, the middle distance and the relay. After a good result in the long I was excited to see if I had actually learned to read a map in the middle, but it turns out I'm not actually that advanced, and I made a 6.5 minute mistake, along with a couple other 30-60s mistakes. Not pretty, but not as disastrous as the sprint. The long mistake involved actually being lost, rather than just taking a wrong turn, I actually didn't know where I was. That is always exciting. I was on a mixed team for the relay, being the only American at this event. It was cold, something like -16C, and since I didn't know when my Finnish teammate would come in, I got pretty chilly waiting around. I'd like to think that this contributed to my clumsiness when I tried to put my map in the mapholder, because it took the entire 300m of stadium for me to get that stupid map in place, at which point I still hadn't looked at it. So, the first two controls were a little hesitant, but then I found myself racing Yvonne from Switzerland, she would make good route choices, I would think I was being clever and then realize I had done something stupid and ski like crazy to catch back up before repeating that chain of events. She ended up beating me. I came into the tag zone not too far behind her, looking for my third leg skier, who was nowhere to be found. By the time I'd gotten my clothes back on, she had apparently gone off skiing though, so at least we finished. This concluded the racing. Some good points, some bad points, and a lot of things for me to learn... 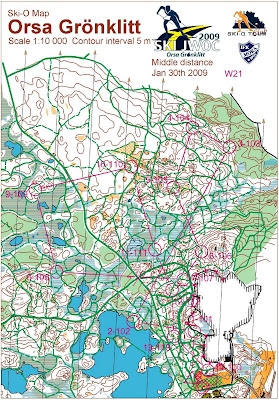 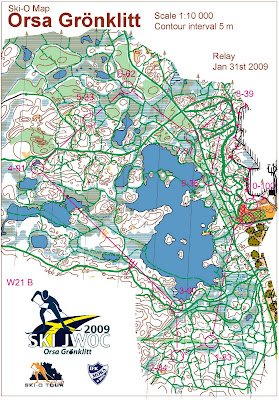 Sunday I spent some time training on the map, and then started my traveling. I hope I can go home tomorrow... I'll add pictures and maps once I have a way to do this.

If you're interested in maps, results, splits etc, here is a link. I know it looks like I did horribly, but keep in mind that all those Finns and Swedes ahead of me are competing to be on their national team, and will very likely be contending for the top spots in Japan. And there aren't really any sucky people, its like racing on the supertour. Fields of 20, but stacked fields.
Posted by Alex at 7:01 AM