Riding my road bike on a dirt trail, only a couple roots in the way, with a heavy-ass trainer hanging over my shoulder, forty five minutes late and completely lost in the woods at Walden Pond. Eventually I found the CSU skiing crowd, they'd set up a tent in case it was raining and there were the testers and a couple parents standing around while the kids were running a loop in the woods. Rob and Allen (I think) were in charge of the clipboards, while Peter and Joe were the finger prickers. Its lactate time! 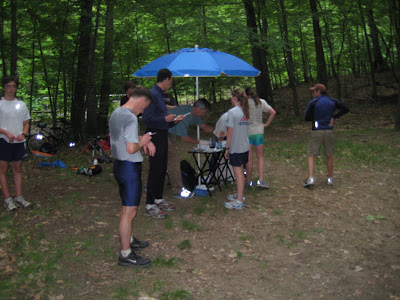 CSU owns lactate testing equipment, but we've never used it. We finally decided that we should do something about this, and rounded up a group of the JO kids to make 'em bleed. Well, just a little bit. The protocol was a field test, rather than a lab test, there was a loop that the kids ran at their perceived correct levels. At the end of the loop, we'd record time, heart rate, and blood lactate level. They did one loop of level 1, one loop of threshold (Rob was telling them "a pace you could race at for an hour"), and one loop of race pace (but no kick at the end! Geez how do you tell highschool boys not to kick it in when they're going at race pace??). We sent them off in groups of 2, every three minutes, and it was taking 8-12 minutes to complete the loop. As far as I could tell, this worked pretty well.

I had been planning on taking part in the running part, I wouldn't be the only coach doing that; Frank Feist was running too. However, being unable to walk probably means I shouldn't try running, so I figured I'd just set up my bike on a trainer. Given how much riding I'll probably be stuck doing this summer, its not a bad idea to get the levels down. I sort of discounted the 2km walk to the start of the loop where they were testing, though... Thanks to my gimpy gait, I gave myself two blisters (well, I also forgot socks and I was limping around in bike shoes), and carrying a trainer while riding just sucks. I have bruises on my head and my collarbone from the damn thing bouncing around. Hobbling around the woods, lost and really late, I was cursing. This is a bad idea, a waste of time, why am I bothering? Top it off with being dinner for mosquitos, since, it feels like you're moving, I mean, you're working really hard, but you're not actually going anywhere on a trainer...

Glad I went, though. I ended up getting in 45 minutes of riding and zones were tested, which was more than I expected from this day of gimpiness. I'm still a cranky bitch moaning about my aches and pains, though. Some things don't change. 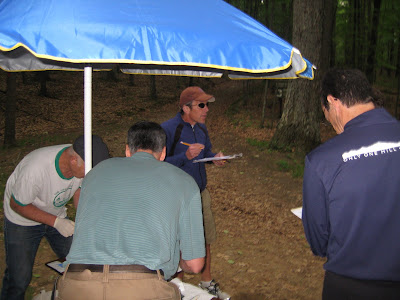