Triathlons aren't really my thing. I can't swim (I'm not just saying that; my favorite stroke is the doggy paddle), my worst discipline on a bike is a time trial, and my running has only landed me injured in the past couple years. The only place I really shine in triathlons are the transitions - I have those transitions DOWN!

Anyway, thanks to this lack of skill in these disciplines, my triathlon experiences have been few and far between, and mostly just because I've forgotten how much I disliked the last one. I might not enjoy any one of the individual pieces of a triathlon, but its ok as a whole, and so when I found out that Lake Placid has a mini triathlon every monday night, I really wanted to do it. So did a couple other people at the camp, even though we all realized that doing a triathlon the night of the same day we'd already done some quality L3 skate intervals was a dumb idea. We decided on a compromise of doing teams, which is super lame. But really, it was the only way to make it through a 20+ hour week with three (well, now four) intensity sessions. There are my excuses.

I teamed up with Lucy Garrec (swim) and Jennie Bender (bike) to be team pink - I was running. Lucy was swimming in a hot pink bikini, and Jennie was riding in some sexy pink shades. I didn't have anything pink to wear (how could I let that happen??), although I played with putting Lucy's bikini top over my t-shirt. We were clearly being serious about this. 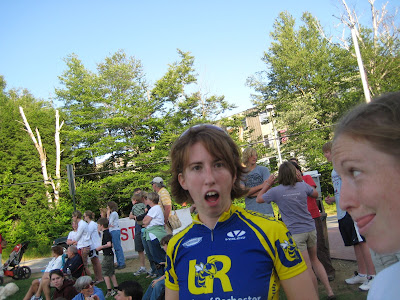 The swimmers took off, and Lucy held her own against aggro master blasters. She came in somewhere around mid-pack, tagged off to Jennie, and Jennie bolted off down the bike course. Soon, she came back after 13 short miles, and off I went on the run. I should mention that I really haven't run too much since this knee injury. I did my first running speedwork while in Switzerland, 4x5min threshold on grass. It was supposed to be 5x5, but, my knee had started hurting so I cut it short. I was hoping it would be fine for the full 5k... 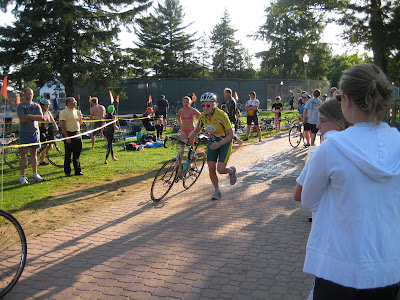 The run started on a flat paved road, and then transitioned to a marginally rolling dirt road, and the runners were told to turn around at telephone pole 13. Our guys' team runner didn't see the pole, and lost their second-place position by running six minutes too far. Pays to listen to the instructions at the beginning of the race... I started out pretty conservatively, since my warmup had really just been plodding around town and I didn't quite feel ready to fly, but I quickly passed a couple guys who were doing the whole thing. I got passed soon thereafter by another two guys, and picked up the pace to match the slower one. Shortly we came to the dirt road, and I used some of the hills to put some time on this guy. I was starting to see a couple people coming back, but I was pretty sure we were holding fast as the second female, behind some chick who had started the run 4 minutes ahead of me and looked pretty pro. After the turn-around I was starting to feel it a bit in my legs, and more worrisomely (is that even a word?) my knee was starting to hurt a bit. Just feeling a bit stiff on the swing-through. I tried to just ignore it and passed a couple more guys who weren't on teams, most impressively a guy who I had thought was going to be really fast, but clearly he just owned fast-looking clothing.

Nearing the end, I was trying not to limp - the knee didn't really hurt enough to limp, but my brain was being scared that it was going to get hurt worse and so it was trying to make me limp. Those damn brains. I was also trying to run more heel-toe rather than striking with my toe like I normally do, because my achilles was aching. I'm just a mess. Anyway, I heard breathing behind me, and it was definitely feminine breathing. Crap! I turned to look and it was indeed a girl, it was Margaret Maher, the NYSEF coach who I think is currently doing ironmans for fun. We had really hoped to beat her, and I realized it was up to me. Yargh. The finish was near, but not that near, so I decided to try picking up the pace. She held fast, and I realized an actual kick was required. I don't think I've had to really kick it in in a race in a long time, but it felt extremely good to just turn on the jets and leave my more tired competitor in the dust. Not that I could have kicked like that if I had actually done the triathlon... but it felt good nonetheless.

We left before they did awards, if they even did do awards. I don't think teams should get prizes anyway, so its just as well. Good times, but I don't think I'm going to be doing two intensity sessions in one day again any time soon. Thats just not smart.
Posted by Alex at 10:41 PM