Thing have been going alright in my prep for WOC, recently. Not great, because ski coaching does not equal time in the woods, but not too badly. Boris came up to town the other day, and we got to run in the woods, where he noted that I frequently divert from my planned line because vegetation pushes me around. So, it was determined that I must be more forceful about bashing through thick vegetation, and to do this, I was going to practice running in a straight line from one point to the next, regardless of what was in my way. With a few exceptions for things like cliffs, deep lakes, etc. This seemed like a fine exercise to me, I mean, what is the point of running through the woods if you aren't going to bash through vegetation and swim through marshes? I finally got around to it on Saturday, when my brother was visiting, so he came along, intrigued by this bashing practice I was planning. 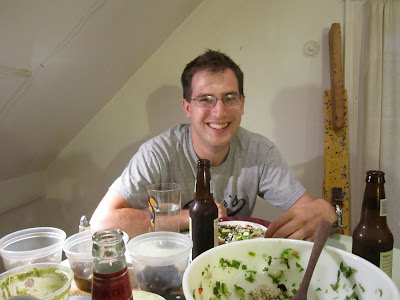 We headed to Hammond Pond, and the bashing was going pretty well, I was starting to really get into it, when I hopped over a log, landed with my foot twisted on a side-hill, and felt the crunching that immediately precipitates a sprained ankle. This was my "good" ankle, the one that hasn't been FUBARed by multiple twists and sprains and torn ligaments like the other, and it's remarkable how much it hurts to sprain an ankle for the first time. Compounding the pain are all the negative thoughts that immediately flood your brain when you injure yourself in a traumatic way, as opposed to those ever-present overuse injuries. The realization that you've totaled your ankle four weeks before the World Championships, and you still have a good bit of work to do to be ready for those World Championships, is a hard one. I think that's most of what drives the emotion after an ankle sprain. The straight-up ANGER at your body for letting you down when you really aren't in the mood to be let down, the frustration at events you can't control. It all rages through my head for a few seconds as I think that the world is coming to an end.

But I stood up, and after a couple limping steps, I could put some weight on it. Not full weight, but there was no sharp pain, just a throbbing ache that wouldn't leave. After about five minutes, I could walk, not normally, but enough to get back towards the car, that Christophe had gone to retrieve. Dammit. Dammit dammit dammit DAMMIT! (I may have used stronger words at the time). Time to RIICE: Rest, Ice, Ibuprofen, Compress, and Elevate. That second I is an important one!

Things seem to be coming around, now. Still a bunch of swelling, but I have most of my mobility back, and the pain is mostly gone. I can walk normally, and will probably be taping it up and attempting to run pretty soon... I've never been good at resting. 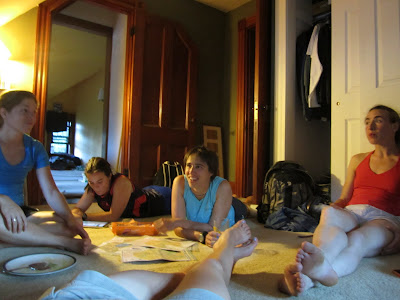 We'll call these girls the enablers... not that orienteering is an addiction or anything.

Luckily, last weekend involved most of my mom's family being in town for a funeral/reunion, so my chances to go abuse myself even more were scarce. Three generations of women in the photo below, so great that my grandmother could make it up here! 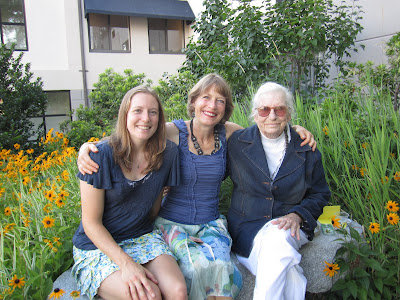