With the park-o season wrapping up, CSU runners still need to train!  Tonight we ran two sprints, in Newton, on maps that Ed just made last weekend.  I think he spent two days and delivered two maps - that's pretty good for a weekend's work!  We had pretty good attendance, 11 runners came to do the two sprints, and followed it up with dinner at our place.  All training should be followed with food, I think.

It felt awesome to really push the pace.  I felt like I was just rolling through the course; definitely tired legs from yesterday's trail tempo workout with the juniors, but I have two qualifiers in a row at WOC coming up pretty soon, so it's good to push the tiredness!  The maps are of pretty small areas, but Ed set good courses, and because the terrain was so open and fast, I definitely outran my brain more than once.  That's the goal! 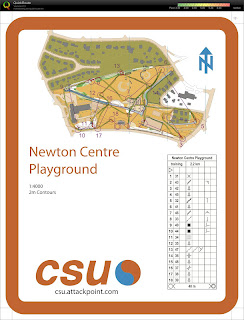 The first sprint was at the Newton City Playground, which had some really interesting little route choice options.  I lost precious seconds from 4-5 going north (d'oh!), and should have thought to take the right-hand route from 5-6, saving even more seconds.  Just because I'm not racing the sprint at WOC doesn't mean I can't run good sprints!  Another mistake at 8 when I went up the wrong trail, and then some confusion at 13, but overall, quite a good run. 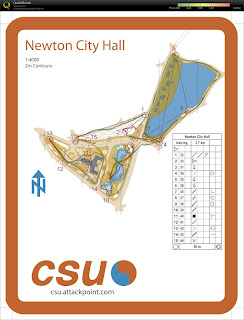 Once everyone had finished up, we jogged over to Newton City Hall, for the second pain-fest of the evening.  This one, I thought that the stupid loop around the lake was just gratuitous running, but it turns out it was enough to make me skip a control!  Not acceptable.  I never went to 7, didn't even see it.  Booo.  It was good to have the course finish with some fast open running, because I had to dig deep to try and keep moving.  I averaged 4:45/km on this course, which doesn't sound super fast, but that's pretty good for including all the accelerations at controls and the mistake at 2!  Despite the mispunch, I feel pretty good about this sprint, too.

Now I'm properly wiped.  Time for some more technical training in the forests, and to recover a bit.  Sometimes I love the feeling of tired legs a little too much...
Posted by Alex at 11:31 PM