The annual A-meet at West Point was slightly different this year from previous years, because they decided to do two shorter races each day, rather than a day of shorter races and then an epically difficult and long race on the second day.  I sort of missed the long race, but a lot of people were pretty psyched about the shorter races! 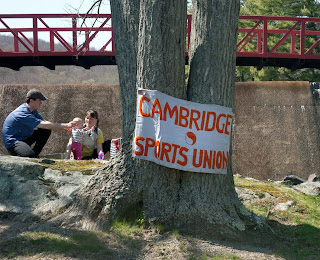 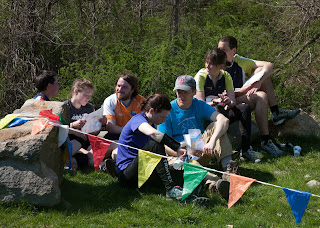 It's always fun to be at the first A meet of the season, and catch up with everyone you haven't seen all winter.  Hi friends!

The first race was a middle distance affair, at the Camp Buckner map.  The courses weren't very inspired, mostly a matter of you-just-have-to-get-there, following fairly linear features.  Of course, that didn't keep me from losing some time.  I lost the most on the first control, when I elected not to check out the number on a control that was near where I thought mine should have been, but my control was supposed to be on a boulder.  That control was on nothing of note.  Turns out, that was actually my control, and clearly the boulder-fairies had come during the night and removed the mapped boulder, but I ran to the top of the hill and back before punching.  There goes 2 minutes.

I was pretty pissed after this, and tried to run faster, but my gimpy calves were having one of their bad days, and attempting to blow up.  This made the uphills pretty difficult, and after the climb from 3-4-5, my splits showed that I made a mistake on 6, that's how slowly I was going attempting to let my calves recover.  They didn't really recover, but at least the course tilted downhill, so I could just sort of fall/roll downhill, with less burning in my calves and less panting.  I made another goof in the circle at #9, losing about a minute, but then I was clean to the end, attempting to pick up the pace, and failing miserably.  It might have been a more enjoyable course if I'd felt better physically, but the whole thing was tainted by losing that much time on #1 because they put a control on a feature that shouldn't have been mapped because it was too small.  People are supposed to vet these courses for quality before the meet, guys... 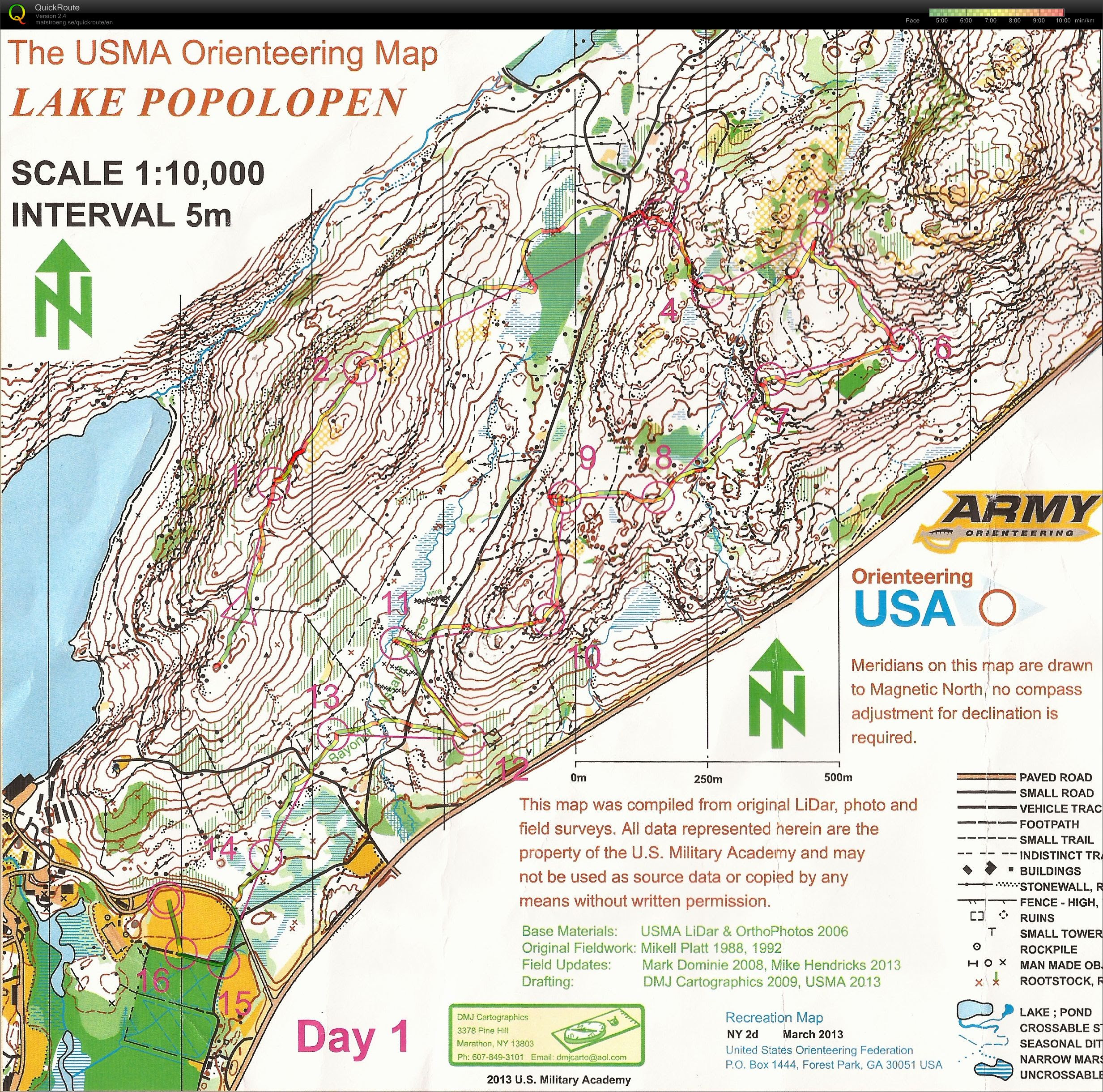 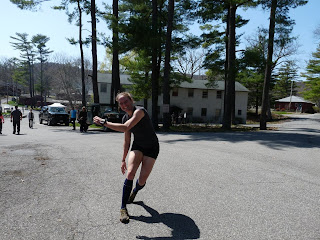 So after a few hours of basking in the sun, it was time for race #2, a sprint at Camp Buckner.  I did a good warmup, attempting to shake out my tight calves, and while they were mostly fine on the paved parts, things were bad in the woods.  My race was clean, and I managed to post some time in level 5 on the heartrate graph, so clearly I was pushing hard, but my splits got much worse on the parts of the course that were in the forest.  The soft terrain was causing my calves to seize up again, and I couldn't bash through the terrain how I wanted.  Hannah ended up edging me by 7 seconds in this race, but this is her home terrain, and to be fair she took better routes on three of the controls that I just didn't see.  A Swedish girl beat all of us by nearly a minute, so clearly there is some speed to be gained, still.  Hopefully I can blame my lack of speed on my misbehaving calves - I was in 3rd (including menfolk) at the end of the paved running bits, but slipped to 8th after the forest sections.  Time to get those calves to recover! We spent the night at Ali's grandma's house near Peekskill, and then were in the base itself for Sunday's races.  The morning race was a middle distance at the ski slope, with quite a bit of advertised climb.  I was starting 2min ahead of Greg Balter, an M45 who I am attempting to beat, and unfortunately, he caught me by #7.  Apparently I hadn't been quite so clean on the first part as I'd thought!  I was in a different pair of shoes today, with metal spikes and bigger lugs, and that helped a bit with my calves, but I still had no pep, and was struggling mightily on the climbs.  Running with Greg, we both messed up #10, missing it by about a minute or so, and though I relocated faster and got there first, he then got the advantage of running me down for the rest of the course, able to see me and take better route choices. My result was better, this time, but Hannah beat me today by more than I beat her yesterday, so she took first for the middle distance combined award.  I would have needed better legs to do better in the results; the navigation was not the limiting factor.  Looking at the splits, I definitely picked up the pace once Greg caught me, so I guess I got a boost, there.

By now I was pretty whipped.  My calves felt like blocks of wood, and the rest of my legs were lead.  One more race.  I needed some caffeine, but the junior fundraiser concession stand had no such thing, so I had some pepsi instead (bleurgh), which didn't give me the kick I needed and the bubbles bothered my stomach.  By now it was hot; first hot day of the spring, and I was having trouble motivating myself for the final, hilly, sprint. 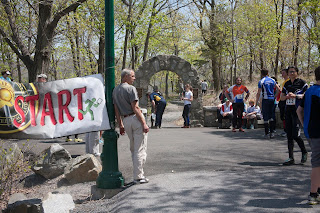 This is the start location for the last race - Flirtation walk, apparently closed to the public most of the time. 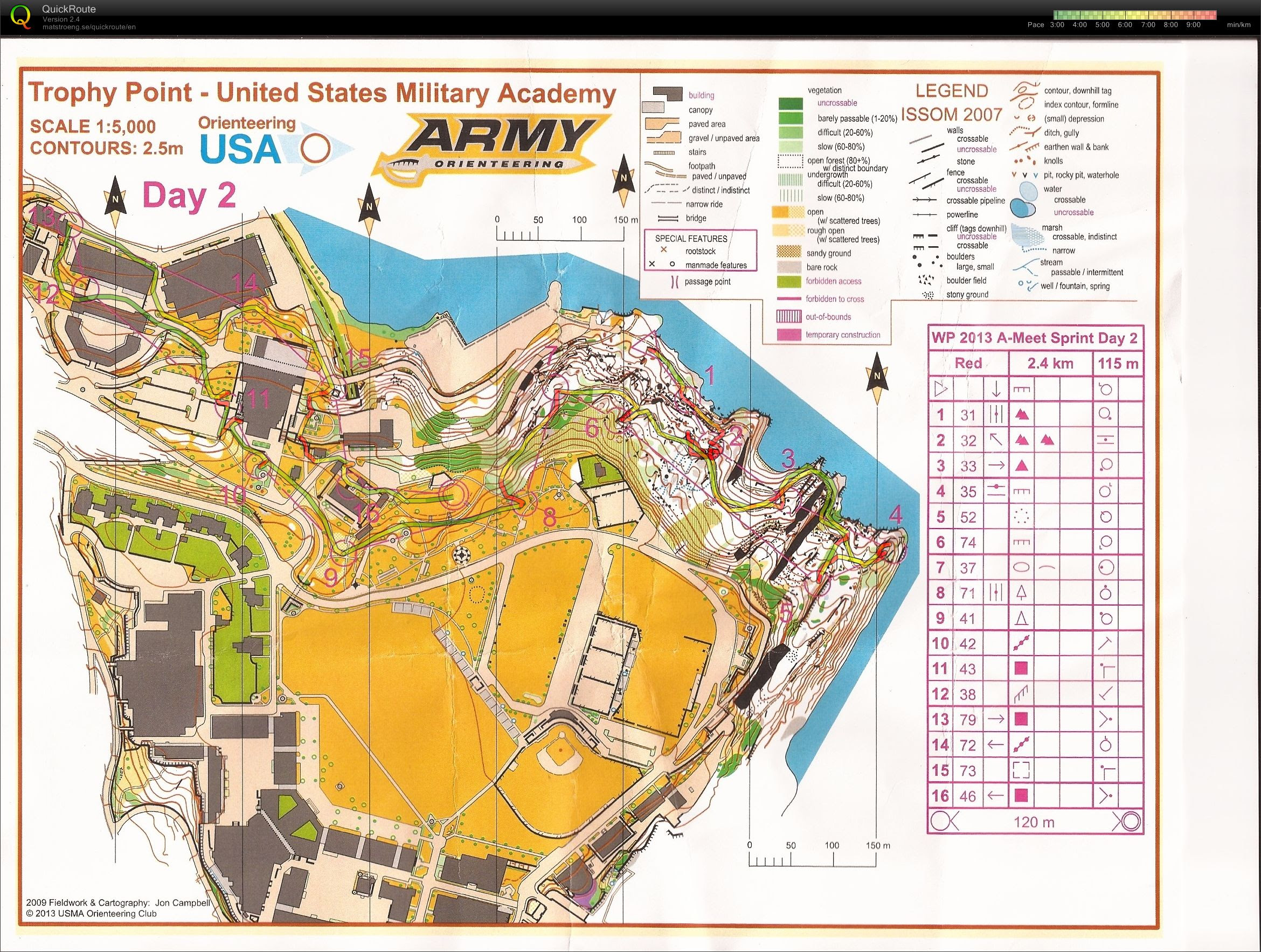 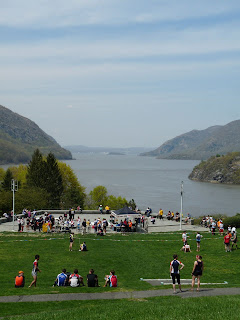 (but, it was a gorgeous day!  Kseniya took a shot of Hannah and I taking in the view)

As you might expect, going into a race with a blah attitude does not lead to stellar results.  I missed #2 to the tune of 3 minutes, just going round and round the control circle and unable to find the damn flag.  This made me really angry, so I had a few good splits in there, but I also messed up 4, going to the wrong cliff, and 8, trying to cut through the reentrant when running around on the path would have been much smarter.  Then we were finally out of the woods, and my legs cooperated again, and I started spiking controls, but I missed a possible route to 11 that would have saved me 40s, mostly because of bad printing - looking at the splits, only two people got that choice right, so clearly it wasn't all that obvious.  One of those people was Hannah, who went here for school.  Anyway, things were fine on the campus, and I was running confidently and aggressively, but I really started sucking wind on the climb up the stairs to the final controls. 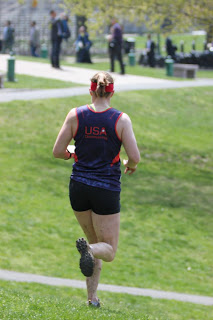 I got my a** handed to me in that sprint, mostly because of my miss on 2, so ended up 5th.  Combined, I was 4th in the sprint awards.  I was psyched that there were so many competitive women racing this weekend; it made things super fun!  Usually we have to compare ourselves to the guys, for lack of female competition, so this was great.  I can't wait for Team Trials, in two weeks! 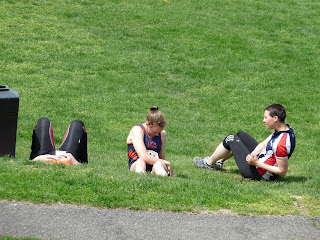 Somehow, Erin convinced all the juniors (+ Hannah and me) that it was a good idea to do a core workout after the sprint.  Ed chose to take this time to take a nap.  Much smarter! 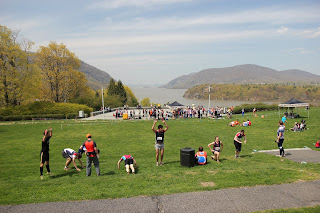