Last weekend was the final Eastern Cup of the season, and the last chance for my juniors to score points to get to Junior Nationals.  I signed up for the skate race, a 10k, but decided not to sign up for the classic race, worried that there might be last-minute panic-waxing, and I wanted to be available for that.  I had never raced at Waterville Valley before, but have skied there a lot, and I found the course to be a bit too flat for my tastes, only 280m of vertical over 10km means a lot of V2 work.

It had snowed a lot in the previous few days, and the ski center organizers chose to run the groomer in the morning, leading to a very soft track.  Thankfully, I finally have a pair of soft-track cold skate skis, and these Madshus rode the deep ruts beautifully.  My plan was to keep the tempo high and the power low, just float over the deep snow without exhausting myself, while still V2ing most of the gradual climbs, since in deep snow a V1 often turns into a high-energy churning flail.  I had a sweet start spot, 15s ahead of Julia, and 30s ahead of Katharine, who is just back from tearing it up among the European juniors.  There was no doubt in my mind that I'd get caught, the question was just when it would happen. 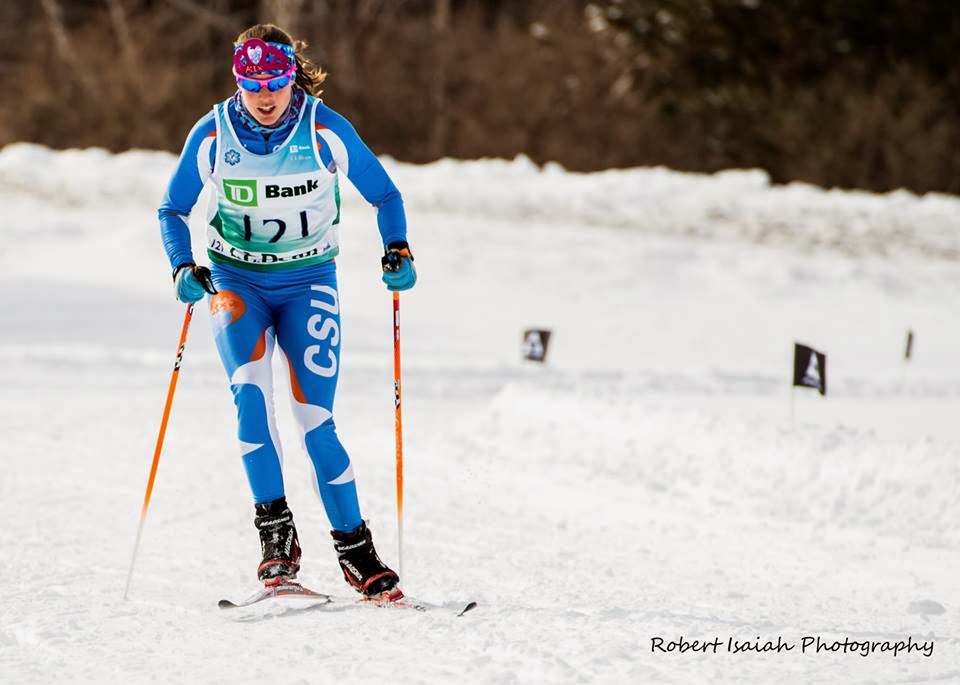 It being my birthday, I decided to race in a sparkly pink tiara.  Not sure what it did for my aerodynamics, but I do know how much it helped my psychological state!

The course starts out immediately climbing into the gradual hill, and I found a rhythm and settled in.  Just after the first km, KO had caught up, pulling Julia.  I let them by with no hassle, and upped my pace to match theirs.  Definitely work, but not quite in blow-up land.  As the hill flattened out into the rollers at the top, Julia dropped back from KO's pace, and I stayed behind her, happy for a ride and a rest.  We caught my 15s girl on the downhill, and then my position in the draft brought me around Julia, and I figured I'd take a pull and move over when Julia wanted to pass.  I could hear her laboring behind me, though, so it was clear sailing up the second climb of the course, V2ing past tiring skiers who had started before me. 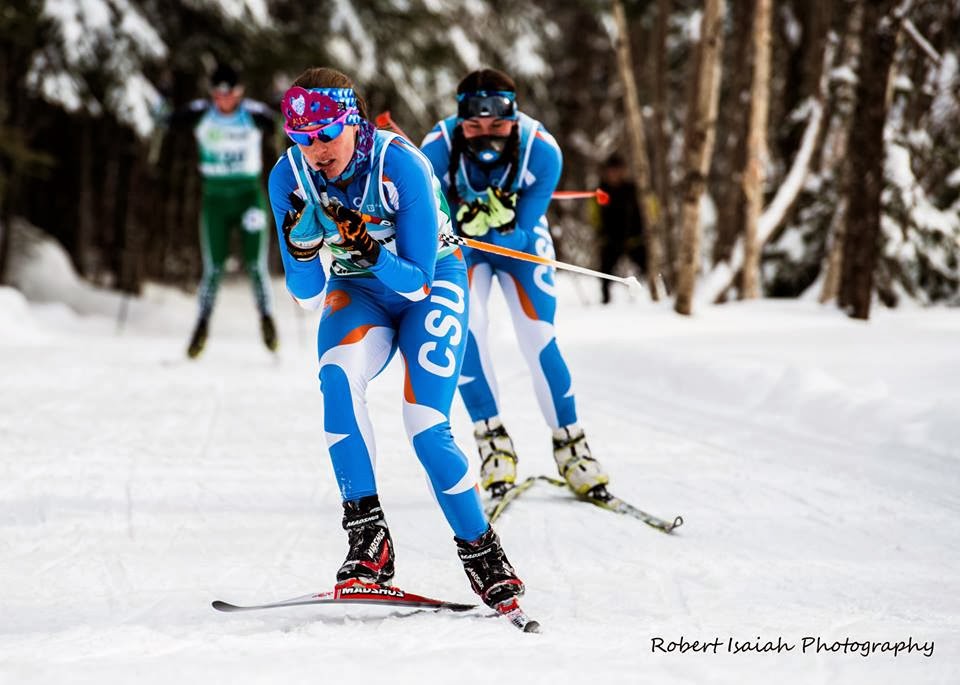 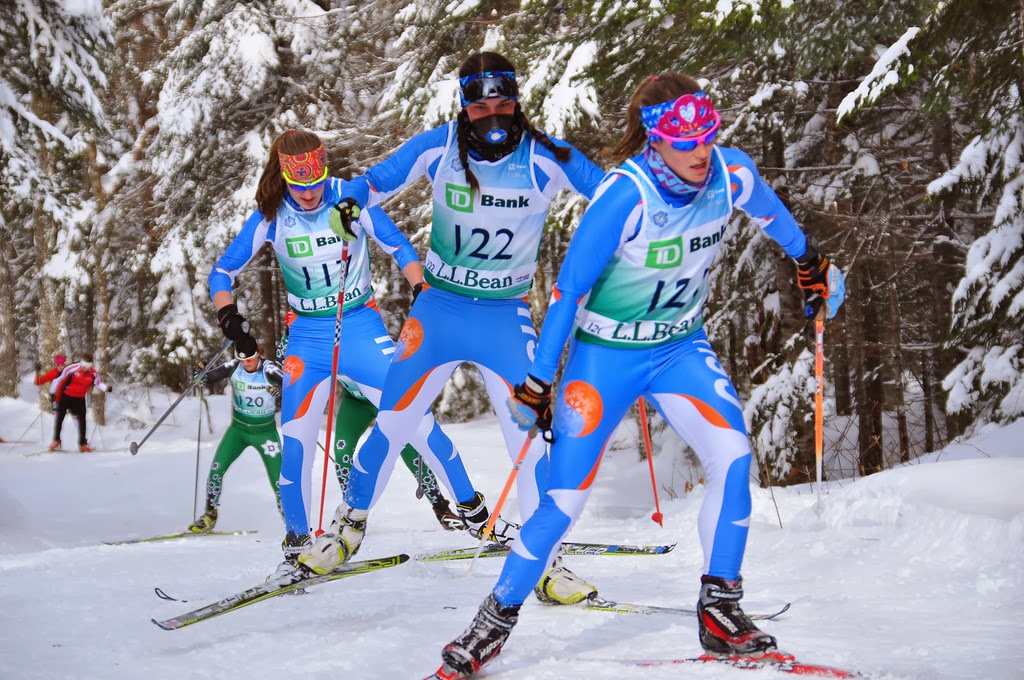 Along the way, we caught up to Rebecca, another of my juniors, and Jamie caught what may be my newest favorite photo of me in racing action.  We crested the hill, and it immediately heads back down for the lap.  Somewhere along the flats, Julia came around, and I tucked back in behind, still not working too hard, but working hard enough that I felt no need to pass.  In retrospect, I should have taken the lead up the first climb of the second lap, and pushed a bit harder, but at the time, I was comfortable, so stayed put.  We were passing more skiers now, those who had started ahead of us and skiers on their first lap, and it was hard sometimes to pass cleanly on the soft narrow trail.

Down the hill I took the lead again, this time determined to drop Julia on the next uphill.  I did manage to get a gap, but the hill wasn't quite long enough to get the full 15s back from her, and though I stayed ahead I only gained 10s on her, to lose by 5s.  This was good enough for 4th place, but 2nd was only 10s ahead of Julia.  This really makes me wish I'd pushed up that first hill harder on the second lap! oh, hindsight... 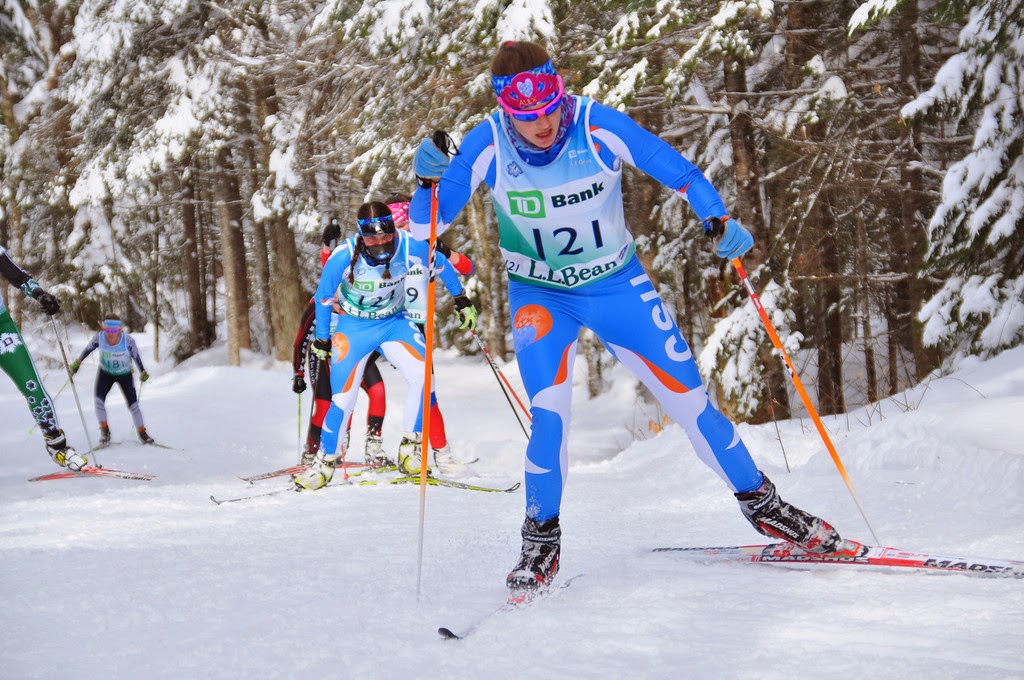 The good news was that I felt really good, physically, and was able to change gears when I needed to.  The taper is starting to kick in! I leave tonight for the Birkie, so I'm pretty psyched to be going in rested, healthy, and with a good race result under my belt. 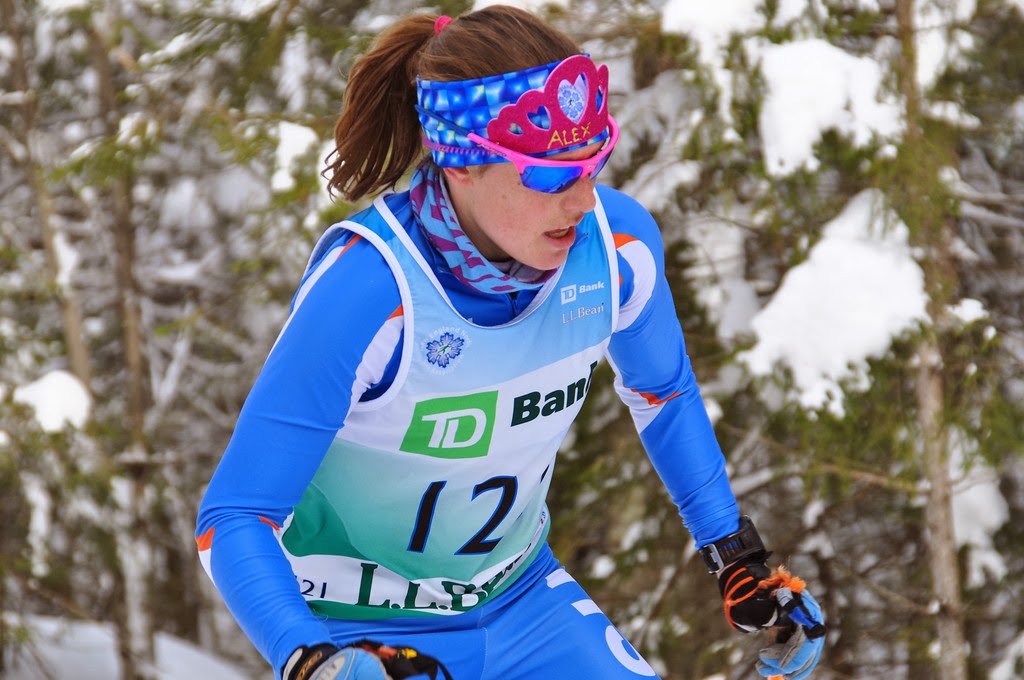 I'm not sure if the tiara made me ski faster, but it sure made me feel faster.  Not sure I can pull off this look with the black Madshus suit...