It's been pretty quiet around here, but training for Scotland is going well, and life is great, if a little busy. We've had a lovely spring, really no stupidly hot days yet, and this just puts me in such a good mood. The 2015 Boston Park Series (Thursday night orienteering races) is chugging along nicely; we're about two-thirds of the way done with the series already, with typical turnout and nice courses. Though, you know if you're picking up controls and watching the sunset at the same time that you'll probably come home in the dark, so there've been some late evenings. At least it was a nice sunset. Right now I'm leading the points race, but as with all series where you get points, half the battle is in showing up to race. We're also two races into the New England Regional Orienteering Challenge. This is a series of races held through the year by all four local clubs - NEOC, CSU, WCOC, and UNO, and since it's the first year nobody really knows how it's all going to work, but we do know that we're seeing a higher quality race at the Challenge races. 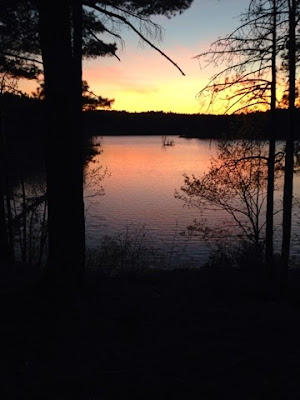 NE Challenge Stage 1
The first stage of the New England Challenge was at Bear Brook State Park, hosted by the Up North Orienteers. I ran the second-longest course, which was long enough for me on the day, given the leaves just coming out and some thicker forest making the running harder than I was used to. Scrappy forest up there, and it takes some strength to move through it, even though there isn't huge amounts of topographic relief.

I ran well, spiking controls and keeping good focus through the end, though I kind of felt like I was running with more enthusiasm than brains out there. Luckily, it kept working out for me, and I was able to keep the pace high throughout, without missing any controls.  In a technical area with low visibility like Bear Brook, this is a major improvement! I ended up winning the course by a solid margin, and feeling very good about my flow. Yay! 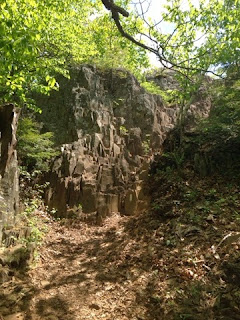 The second race of the Challenge was at Mt. Tom, hosted by Phil Bricker of New England Orienteering Club. This was a hot day, and Mt. Tom is very rocky and hilly, which meant times were pretty slow. I love this map, but it can be brutal to your ankles. I decided that I wanted to be able to carry a high speed, or at least a high effort, for the whole course, so elected to race a shorter course, settling on the green course. I totally crushed it, if I may say so myself, solidly beating out some master runners who usually trounce me. Sweet as! This victory definitely came at a high energetic cost, but it felt really good to get out on those hills and suffer for a bit, while still maintaining map contact and spiking controls. Some days you're just on, and it's great when those days align with a race.

Click the map segment below to see the whole thing, and turn on/off my route choices.

It's nice to be able to beat up on those guys who usually trounce me, but I'm sure there will be payback. So far there's been a low turnout of speedy ladies at these Challenge races, which is too bad - hopefully I can drum up some gender-appropriate competition for the fall season! Of course, not to be outdone by the younger men, I decided that I would run the blue course as well as the green, to get in some distance and time on my feet, at a slightly lower intensity. It was a lovely day for a run in the woods, provided you were running - the mosquitoes provided good motivation to keep from walking any uphills.

Merrimack River 10 miler
I elected to hop into this race on a whim; mostly because it was close enough and cheap enough to be a very convenient excuse to do a 10 mile tempo. I haven't done this one before, but I've heard it was pretty quick, being mostly flat, then flailing about some steep hills, then doubling back and finishing with the flat bit. Sign me up! The one flaw in my plan, and one that's taken me down before, too, was that I hit the junior strength workout on Friday night pretty hard. I've been trying to get stronger for running up hills in Scotland, so this is all part of the larger grand plan for being fast in August, but it left me barely able to walk on Saturday morning. I lined up hoping that running would just loosen everything up, but that was really just wishful thinking. 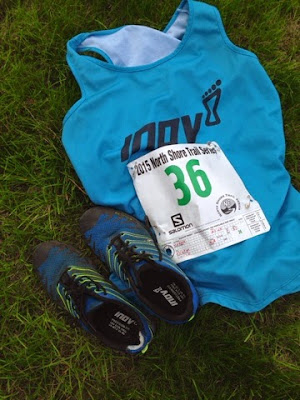 It's singletrack from about four steps into the race, and luckily I'd lined up relatively near the front, maybe third or fourth row, because I imagine that behind me there was complete and utter chaos as 150 runners attempted to funnel into the trail entrance and across a singletrack wooden bridge. Yay! As promised, the next 2-3 miles were pretty much dead flat, just following the river. It was very pretty, with the leaves just unfurling and everything bathed in a green light, but my legs were very unhappy with the effort I was requesting. I had hoped to run around 1:10, based on what I knew of the course and some past results, but that would entail running about 30-45s/mi faster than I was currently doing, and the legs were sending a clear message that this was NOT happening. Well, ok then, tempo run it is, and I couldn't think of a better way to go for a long run with an intensity component!

Around 3mi in we hit some hills, and things got much more interesting. Hills always make things more interesting! There was a good one that was all eroded out with mountain laurel growing over the top, making it like a tunnel that you were crawling up. There was basically a plateau next to the river, cut through by gullies, and we just sort of ran up and down the gullies for a while, until we hit the turn-around. My watch read 37 minutes, so I knew unless I could up the pace I wouldn't be seeing sub 1:10. The leading ladies were ahead enough that I didn't think I could pick them off, because my butt was so sore from strength that I was really struggling. Going up hills, I couldn't hike because my butt was too sore, and I couldn't run because my butt was too sore. Going down hills, my butt was too sore to open my stride. It was fairly unpleasant, so I just kept reminding myself of what a nice day it was for a run with company, and that was true, so that would get me through the next mile.  Passing people on the singletrack was never too difficult, in general the slower running was happy to yield. I had some guys to chase down in the final miles, but I really couldn't run any faster than 7 minute miles, so I just sort of trotted to the end and called it a day.

I really enjoyed the atmosphere at this race, great race director and a nice mix of seriousness and playfulness. I'd like to come back, with a less-sore butt, and knock some minutes off that time!
Results