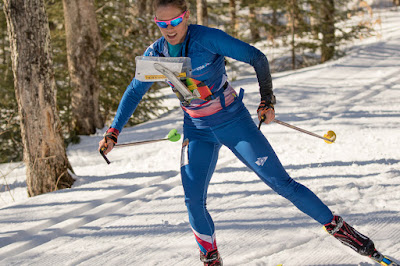 This blog has been pretty quiet lately, as all the ski races kept getting canceled due to lack of snow. We had a long break between the final Eastern Cup and any other important races; I'd signed up for Rangeley Loppet, but even Rangeley lost too much snow to hold the race. Jess and I headed up for some skiing anyway, and it was 90% superb, 8% pretty bad, and 2% rocks. So I guess it's good they canceled the race, but that's always a bummer.

So after many weeks of not-racing, it was time to head north to Aroostook county for the ski orienteering champs. Not only had I not done any ski-o yet this year (see the above paragraph about lack of snow), I was feeling slow and out of shape. It'll come back to me, right?

Ed was one of the three organizers, technical director, so he'd been up there most of the week before, setting everything up and skiing a lot. He and Greg and Ken did a spectacular job, cutting new narrow trails, setting great courses, and getting us going with touch-free punching, which is a big improvement over having to stop and punch each control. So I knew that regardless of how I skied, the event was going to be awesome. We managed to get about 40 people up to the event, which, for a niche sport of two niche sports, in a remote location, is pretty darn good. 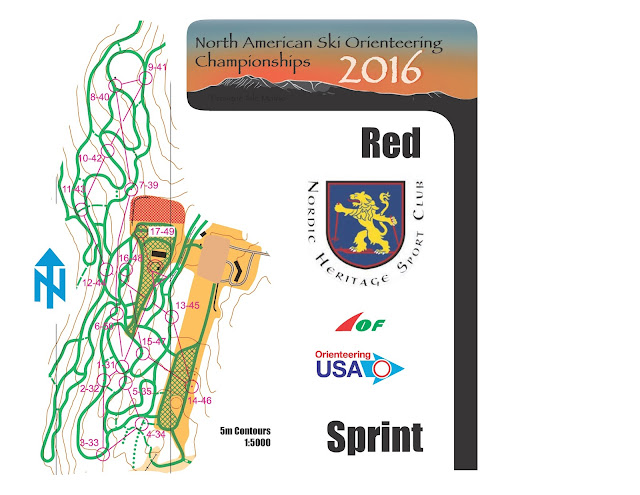 Sprint race
Friday's race was an afternoon sprint. It was warm, and even Presque Isle had gotten rain on the Wednesday of that week, so the stadium was largely a puddle. Luckily, the snow had been transformed enough that it was still fast, despite being slushy. I broke out a pair of skis from 1998 that are just totally designed for slush, and that was a good call. We had one-minute start intervals, and somehow I managed to leave myself barely enough time to get into all the necessary paraphernalia before starting. I managed not to get too flustered, but this being my first ski-o of the year and all, I never felt like I could really push the pace. Decisions were just coming up way too fast! Luckily I managed to avoid overskiing any junctions, and I made the right decisions, and I even managed to be fast enough to win the race, barely a minute ahead of my US Junior Teammate Melanie Serguiev (who, I should mention, just got back from a week of racing at the Junior Ski-O World Champs in Austria!). I was pumped - it's always good to start a race weekend with a clean race and a top step of the podium!
Results

Long distance race
It froze up hard overnight, thankfully, and conditions were a mix of frozen granular on the big trails and ice on the narrow trails. This was good, because I never felt like I could really push the pace, stuck moving at marathon pace, so at least the fast conditions kept me moving well. Below is the first map - we had two map exchanges, for three total maps, and this spread the competitors nicely. The organizers made this individual start again, so I had no idea of how I was doing, and I think I got a little too comfortable out there. US Teammate Anna Voegele (from Tahoe, a land of snow) was winning the race at control #9, and more worryingly, took the lead back again at control #19. Luckily, I managed to pick up the pace for the final loop, and ended up in the lead, by a scant 5 minutes over a 70-minute race. That's tight, for ski orienteering! 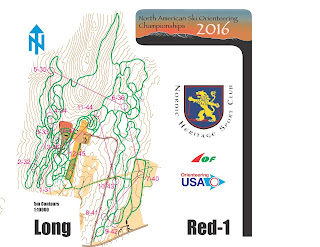 There was some really nice route choice on this map, and the fast snow made things really fun. I took a couple short cuts that might have been ill-advised had I actually gone over the edge of the trail (it was damn close), but the crust was really good skiing today, thanks to the freeze-thaw cycles of the last few days. I had a ton of fun skiing that race.
Results 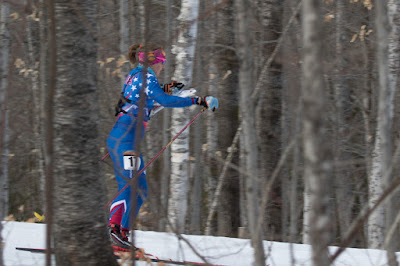 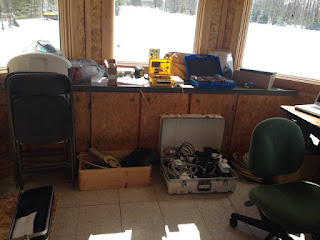 Ed was so psyched with the timing hut! He could unload all his technology into an indoor space, with a 360 degree view. 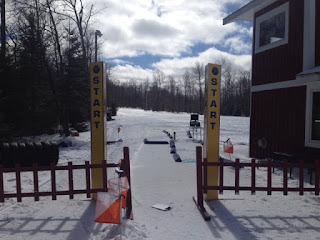 Middle distance mass start
The final race of the weekend was the middle distance race, run as a mass start. We had one map exchange, and the courses were "forked", meaning that although everybody goes to the same controls, they might not do it in the exact same order, to discourage following. My goal for the day was to really race, push the pace and end up tired. Naturally, this led to more mistakes than the previous two days, where I had navigated cleanly. I was flustered off the start, skiing by the wrong first control before getting it figured out, and then on the descent to the east side of the map I couldn't figure out how to get out of the stadium, losing even more time. Argh!

Thankfully I got it sorted out after that, and started racing more aggressively. Maybe too aggressively - I was taking a narrow trail through the woods, and there was a small wooden bridge (for the mountain bike trail that this narrow-groomed trail was following), over a deep little gully. The bridge had lost most of its snow, but I tried to jump the part without the snow, and while I mostly made it, I miscalculated my momentum, and one ski hooked on the opposite bank while my body slammed into the icy snow above it, left hand first.

That hurt. I couldn't move my left hand, and pain was stabbing through my fingers and wrist. I wriggled up onto the bank, and managed to get back onto my feet, wondering if I'd broken my hand. After what felt like 3 minutes, I discovered I could wiggle my fingers, so I sort of poled along the trail with my right hand until I could punch the control and decide what to do. By now, adrenaline had kicked in, and I could move my hand, so I tested poling on it, and while it didn't feel awesome, it was doable, and adrenaline took care of the rest. Let's race.

Now I had some time to make up, so I hammered up the hill with a lot of gusto. I caught back up to Anna, who had passed me during my little hand episode, and then had a series of really clean legs, coming into the map exchange with a clear lead. I cruised through the final map with no mistakes, but I had probably 5 minutes of mistakes on the first map, which is frustrating. It was still good enough to take the win again, making three for three! I call that a successful weekend. And the hand appears to only be sprained, recovering quickly in the next few days. 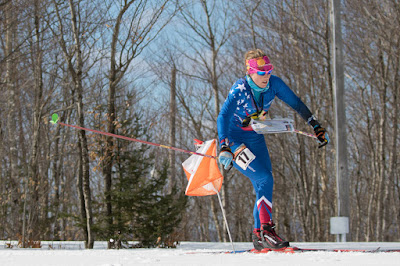 Skiing by a control in the middle distance. 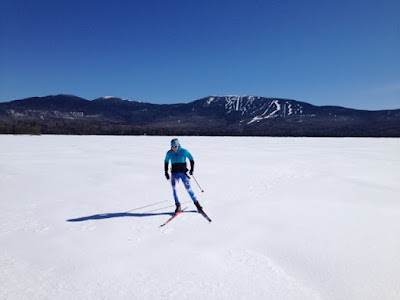 This shot is from Jess, when we went skiing at Rangeley the week before ski-o champs. The lakes were nicely frozen!

And, we had time to do a little hiking - almost looked like winter up there! Not often that you can climb a 4000 footer in sneakers in early March, though.