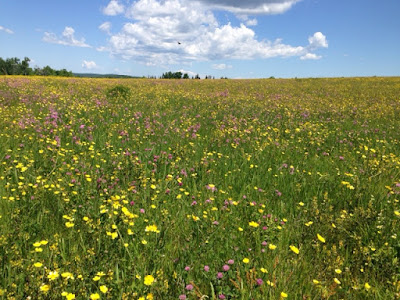 The other weekend was my first Grand Tree race of the year – the Greylock Trail race! This is a great course, testing all aspects of trail racing. Sustained uphills, technical downhills, fun singletrack, and some grinding false flats. Not to say I like any of this aside from the technical downhills, but I do think it’s good to push myself on terrain that isn’t naturally my favorite. And having the two past years of data to compare myself always satisfies my inner nerd.

I headed out with a small group of junior skiers, like last year, for a combined Massachusetts Team training weekend. Perry and the Berkshire Nordic crew led us on a really nice little ski in Savoy (oh, I’ll miss that trail race this year! Huge bummer that it’s done), on very nice pavement with wide shoulders. We don’t have that in eastern MA, and it made me miss NY state rollerskiing adventures. We followed this up with some cliff jumping, yoga, pizza, and s’mores, so all in all it was a pretty idyllic day. 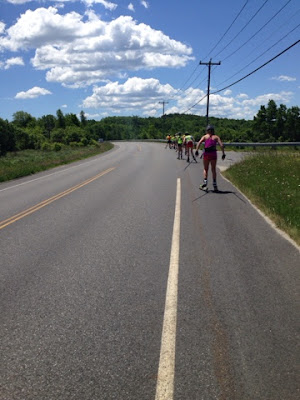 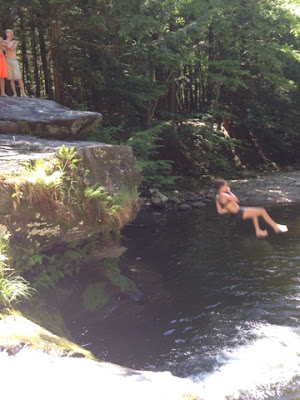 Sunday dawned pretty hot, and I was cursing myself for not bringing my handheld waterbottle carrier. I debated running with a waist belt, or just carrying the bottle outright, but decided that it probably wouldn’t be THAT bad to just drink at the aid stations. Oops. Only one other of my juniors was doing the long race, and one dad, the rest signed up for the 5k. Ed did the long race, of course!

We started out up the mountain, and I took it easy, falling into a comfortable pace. Too comfortable, really. I felt good, which is not actually a good sign on a 3-mile climb! My calves were behaving, and as we hit the AT in the sun I found that I had some more gears, so started to pick off some runners ahead of me. I could hear Debbie behind me, so I knew I was doing ok if she hadn’t passed me on the climb. I was starting to notice the heat, though, already getting dry mouth, so I told myself I had to get on top of this hydration issue as soon as I hit that aid station.

I drank 3 cups of water and 2 cups of Gatorade. You can imagine how long this took. I was there nearly a minute! Debbie passed me with a couple ladies in tow, and as I started out after them I realized the magnitude of my mistake. Not only did I not have any water for between the aid stations, I had to do all my descending on a very sloshy belly. You doofus!

Luckily the sloshing didn’t turn into a dreaded stomach cramp, and I caught back up to Debbie (who was definitely not pleased to be passed on a downhill! Sorry babe, I do that part pretty well) and a bunch more ladies on the descent. Apparently I just missed seeing a moose – I heard noise behind me but had assumed it was a runner, and was totally in race-mode, don’t look back!

A girl in pink caught back up at the second aid station, as I spent another minute drinking, and I let her go a bit, just trying to enjoy that next bit of singletrack at my own pace. I was consciously keeping myself in a very happy spot, just loving these trails and dancing my feet across the roots. I caught up easily along Jones’ Nose, but decided to hang out behind her for a bit, and try to recover. The heat was getting to me, and I could feel the fatigue creep.

At the third water stop, pink-girl didn’t stop, and I only drank 3 cups of water, thus only losing maybe 30 seconds, then shoved ice into any orifice I could find and set off to chase down pink-girl. I luckily caught her while still on the downhill, and we climbed together for a bit on the relentless loose-rock doubletrack. Eventually my slow jog started to outdistance hers, and I found myself picking off bonking men again. We finally started the downhill, and I could tell I was tired – both ankles were doing those danger-rolls – not quite a rolled ankle, but near misses. I backed off a little, not willing to risk injury, and just feeling kind of fragile. Couple times I had to remind myself out loud to have strong feet. Unfortunately I couldn’t hold off the ankle-roll demons forever, and went over on my right ankle just where it gets steep with ~1.5mi to go. So close to the end I knew I could walk this off, but I was not happy about that turn of events.

It was only a minute or two that I was walking and then gingerly running, but that was a much slower finish than I've had before. I was in no-man’s land, and thankfully didn't get passed by anyone in the last mile of the race. The relaxed finish put me just a minute ahead of last year (which had been super slow in the rain and wet), but 4 minutes behind the year before. I think I can attribute most of that to the water stops and then the ankle roll slow-down, so I’m actually feeling pretty good about this one. I was second, four minutes behind a little J2 skier from western MA who I coached last year at EHS, who goes up hills like it's her job. She probably got to the top of that thing in under 30 minutes…

Next up is the Rocky Mountain Orienteering Festival! Time to see if I remember how to race at altitude!
Posted by Alex at 8:42 AM