The Billygoat is one of my favorite races, and also one that I happen to be very good at. Long mass start orienteering race where you're allowed to follow people? sign me up! This year, however, thanks to the knee injury, I wasn't prepared physically for this race. I had a long debate in my head as to whether I should even start, but eventually came to the conclusion that I may as well try. Who needs running training for a running race?

We headed down on Saturday night to hang out with Boris and Alli and Barney and Inara (one of these four is a beagle), before making our leisurely way over to Blue Mountain, in Peekskill. 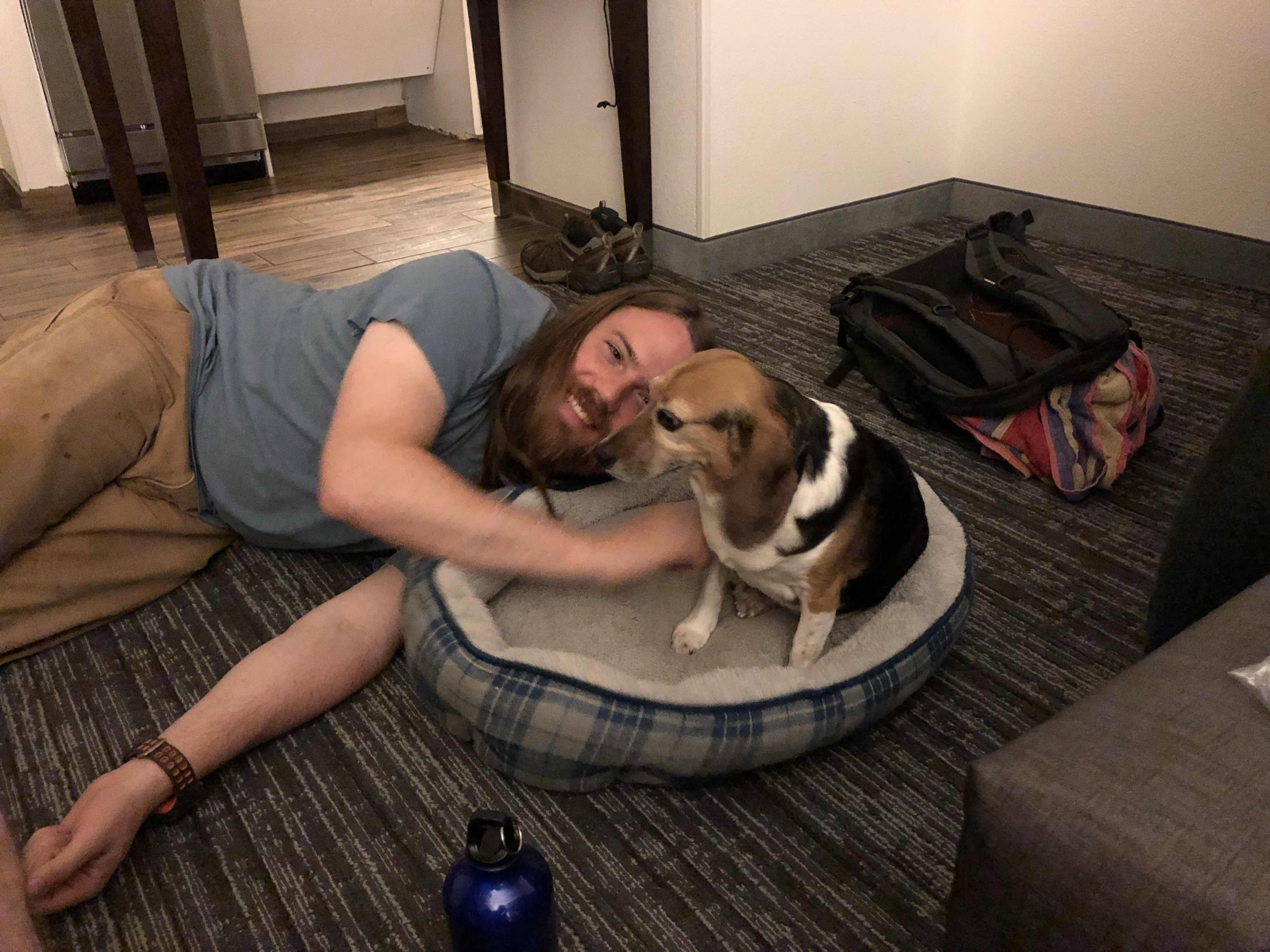 Ed will sleep here in the dog bed. Barney doesn't mind too much. 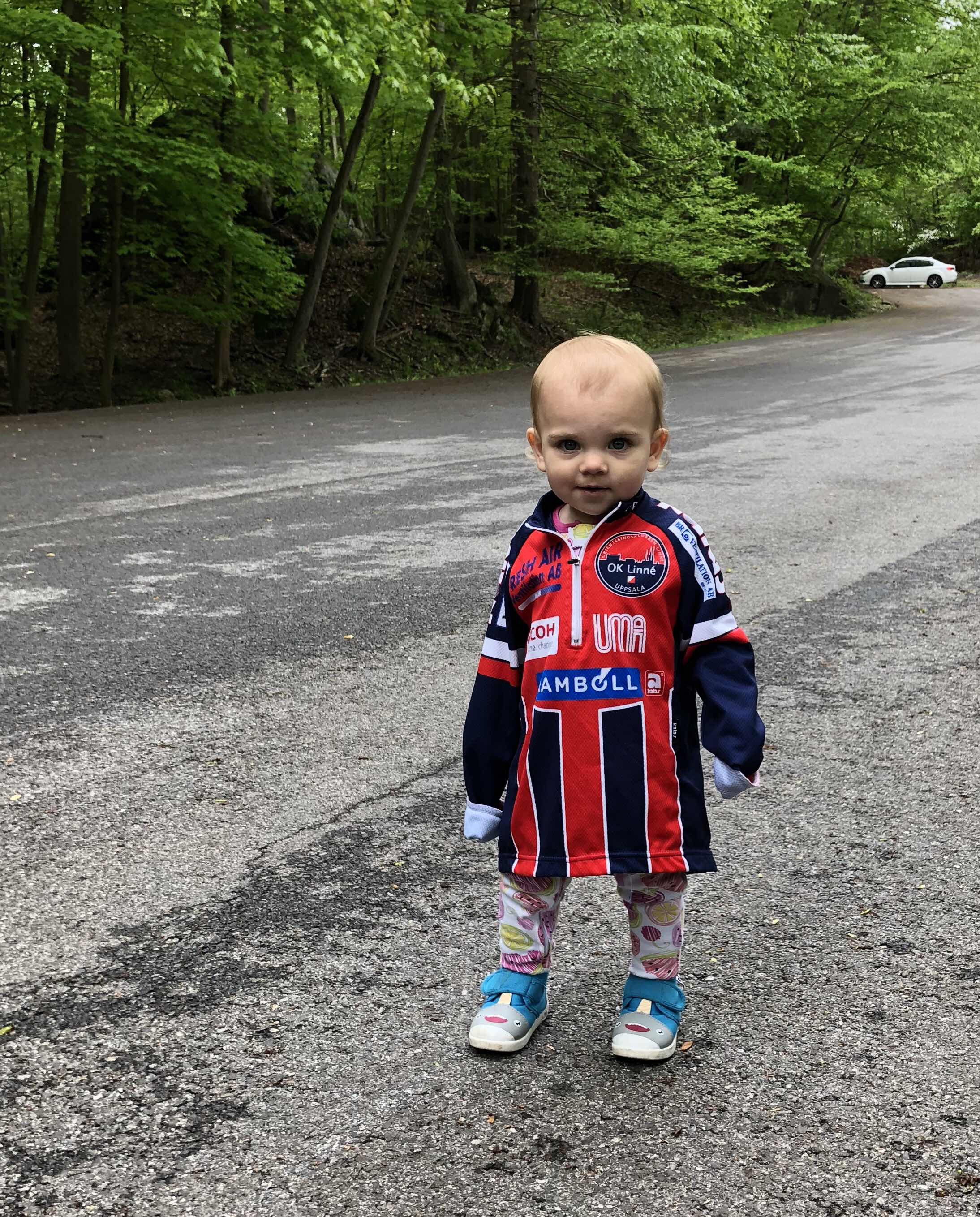 Inara did the long race, entirely in the child backpack that Boris was carrying. They had the fastest finish split, but I hear they hiked the rest of it.

Blue Mountain is a fantastic place for orienteering. The trees are tall and well-spaced, with very little groundcover and not even too many downed branches and trees! Lots of great cliffs and rocks to play in. I was last here in 2012 for a training camp run from Neil's house, when he lived in Peekskill. Good times!

So anyway, my plan was to race conservatively. Walk all the uphills, navigate perfectly, and enjoy myself and enjoy the fact that I was out orienteering on a lovely map in great weather. This plan lasted all of 15 seconds, because as soon as we started running, I entered race mode. Old habits die hard.

The first leg had a route choice, and I went left, chasing some fast boys and running with Bridget from West Point. I had my money on her as a winner, but I wasn't going to go down without a fight. As we ran up the hill, I confirmed that she was much stronger than me up the hills right now - I am so out of shape! Turns out that not training doesn't do much for your aerobic capacity. My breath sounded loud in my ears, my heart was pounding, my legs were burning. The self doubt didn't creep in, it jumped in. You're too unfit for this, your knee is probably going to start hurting, you shouldn't play these games if you haven't prepared for them. I tried to ignore the evil little voice by telling myself to be super clean in the navigation, but the fact that I haven't been in the woods in months had left me rusty, and in the technical areas I was really hesitant.

I was running frantically, continually trying to make up time for stupid little mistakes, and never giving myself time to regroup and get into the map. Rushing the navigation meant I kept making mistakes, and then I'd run faster to try and make them up, only to make a mistake because I was getting tired. By #2 I had already dropped three minutes in mistakes, and was at the back of a very large pack that I wanted to be in front of. Of course then I pushed the pace hard, and had made it to the front of the group by #6, but at a high energetic cost.

I was running near Jeremy from HVO at that point, and despite dropping another minute in the vicinity of #8 and basically letting the pack catch back up, we were still in front heading down the beautiful hill towards 9 and 10. At this point, I felt like I probably had the speed and endurance to pull this off, assuming I was actually in the lead for the women. Oh, hubris. Down the hill toward 10 I got wayyy off my line, wandered about for a while trying to figure it out, and ultimately dropped about three minutes. On a single control. Oh, this was getting painful.

Now I was behind the pack again, but still fighting. The downhill trail run towards 11 was built for me, and I pulled a minute back on the pack there. 11 was the aid station, and the volunteers were surprised to see me so far back, which was both humiliating and nice at the same time. They still believe in me! But I'm really sucking at this! As I ran around the pond toward 12, I could see the pack disappearing into the woods, and I was in hunt mode. Working way too hard, I finally caught the tail of the pack at 14, and told myself that I was not allowed to move to the front for at least one control, to let myself recover. I could tell that any matches I had had to begin with were totally burned by now. I had dropped 8 minutes in mistakes at this point. Oh how I wish I'd just gone slower and in the right direction!

Anyway, I was feeling recovered enough to push things again toward 15, and once at the front I promptly lost contact with the map and led the group in a merry little swamp dance for a bonus 1.5 minutes. Oops. The group splintered a little bit after that, and I finalized my decision to skip #20 - in this race, you can skip one (and only one) control. In hindsight, 24 was a much better skip, especially considering I really didn't have any more gears to kick into for the extra trail run I'd given myself. Even worse, I took a wrong turn at a trail junction, costing myself an extra 2.5 minutes. Once back on the right track, I ran into Bridget and Kristin and Tyra, who had just punched control 20, which I had skipped.

So of course, I bluffed, and ran past at full speed. Kristin yelled to Tyra "go with Alex!" and Tyra followed. Damn. Luckily, she fell for my bluff of running faster, and as we started uphill to 21 she took the lead, and I started walking. My evil hope was that Tyra would have run too fast and would thus make a mistake in the circle and I'd get ahead. This worked, but I also made a mistake in the circle, wandering around too high up the hill for two minutes before figuring it out, now behind Kristin and Bridget again (but Tyra was even higher on the slope).

Anyway, at that point the writing was on the wall. They all skipped #24, which I had to go visit, and I eventually limped into the finish thoroughly beaten and broken, three minutes back and in fifth place. All told, I dropped about 16 minutes (MINUTES! I normally measure mistakes in seconds!) over the course of the race. That was embarrassing and humbling, but the good news was that my knee held up ok, and my fitness wasn't as atrocious as I had expected. It was a good hard race, fast and fair, and I really enjoyed battling it out with that pack. Next year, I'll be smarter.
Posted by Alex at 11:26 AM