Laramie kicked off a few weekends of racing, which is the good stuff as far as I'm concerned. Upon coming home, we had the Louisa May Alcott 5k with my junior skiers, and I jumped into the 10k, in light of my upcoming marathon. I had some diaphragm cramping problems, and sort of had to cruise my way through it, but it was definitely still fun to pin on a bib! 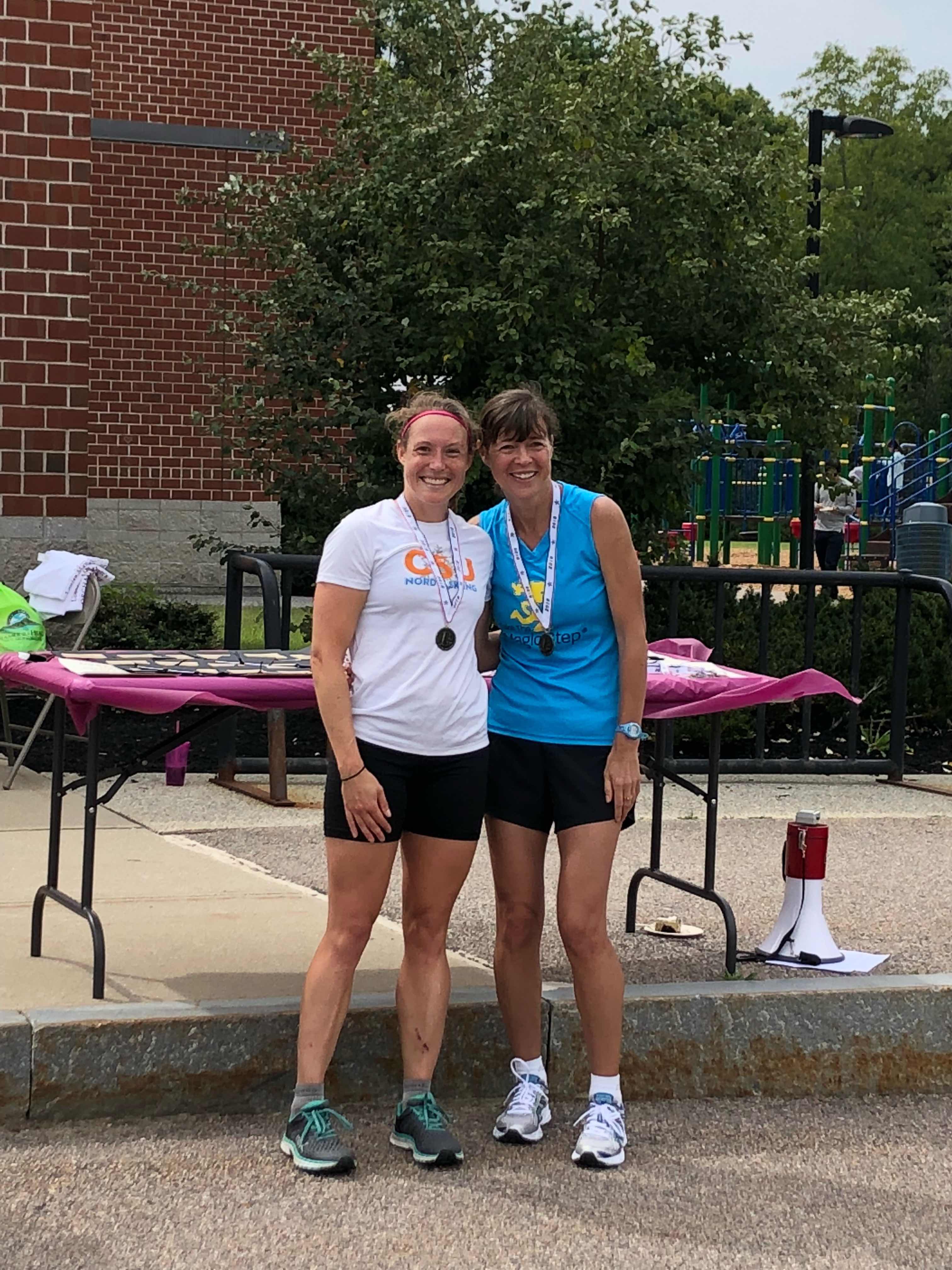 Managed to win my age class, by virtue of having not too many other people racing the 10k in my age class. But that meant I got to pose with Uta Pippig!

That afternoon I headed up to Pawtuckaway, for UNO's famed camping weekend. I skipped all the daytime orienteering, but arrived in time for the potluck dinner and the Wicked Hahd Night-O. I was going back and forth with Ernst and Neil for most of it, but didn't really have the energy or ability to run away from them, and ended up in 2nd place behind Neil. Super fun!

Because two races in one day wasn't enough, I was set to run the blue course the next morning (the longest hardest one). But, enough other people around me at breakfast were running the next one down that I decided to follow the herd. The fatigue from a pretty heavy training load in Laramie, combined with the altitude and a tough week at work, meant that I was hardly upset about this decision! I had a relatively clean run, with the one exception being that I lost a trail I was trying to follow on my way to control #11. I didn't notice this for too long, and corrected poorly, dropping about two minutes. But my slow and plodding pace still netted me third overall, and ahead of all the ladies (though not by much). I'll take it! Results. 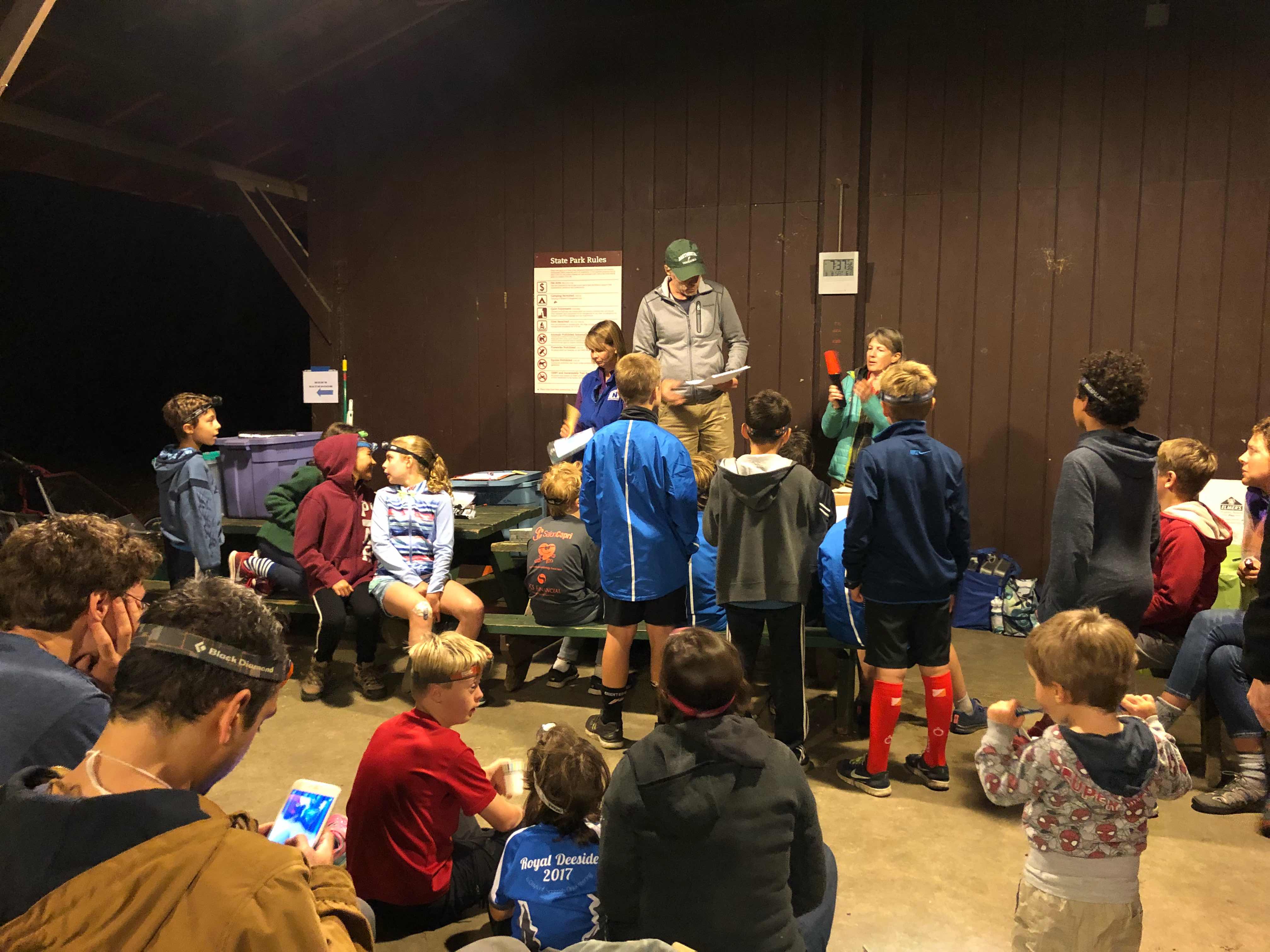 So fun to see so many kids getting ready for the vampire-o after dinner! 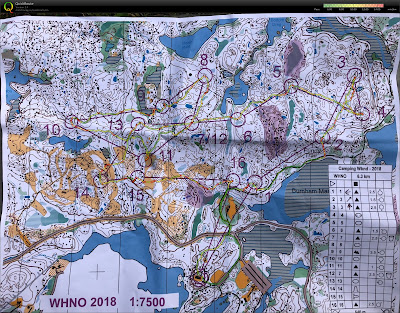 The WHNO course with my track on top. Click for larger. You can see where I totally decked myself on the way to 15, because the track goes to that bright red you-were-stopped-here color. 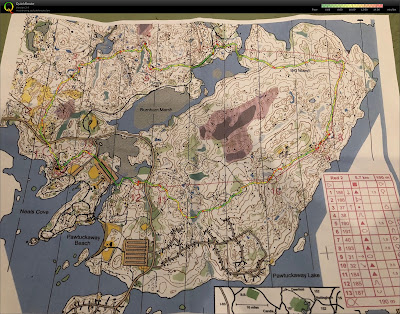 Sundays' course with my route. Pretty proud of how straight I went from 7-8! 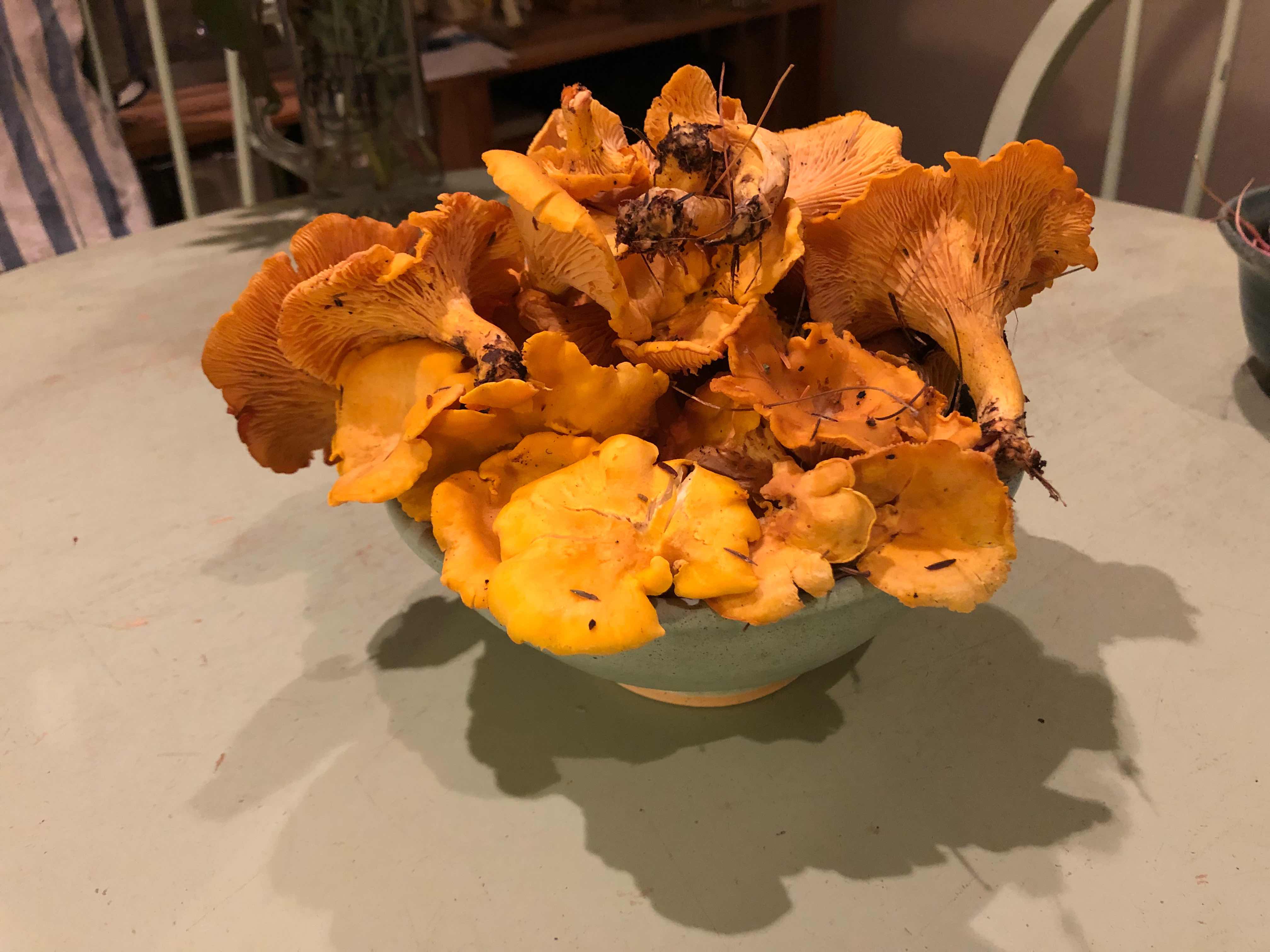 After Sunday's course, Ed had managed to show up with his new vehicle, and we went for a nice trail run on the windy singletrack. That is a much more fun trail when you aren't trying to use it to navigate! We'd offered to pick up a couple controls, since we were out there late, and as I collected controls, Ed collected a much better treasure - fresh chanterelles! 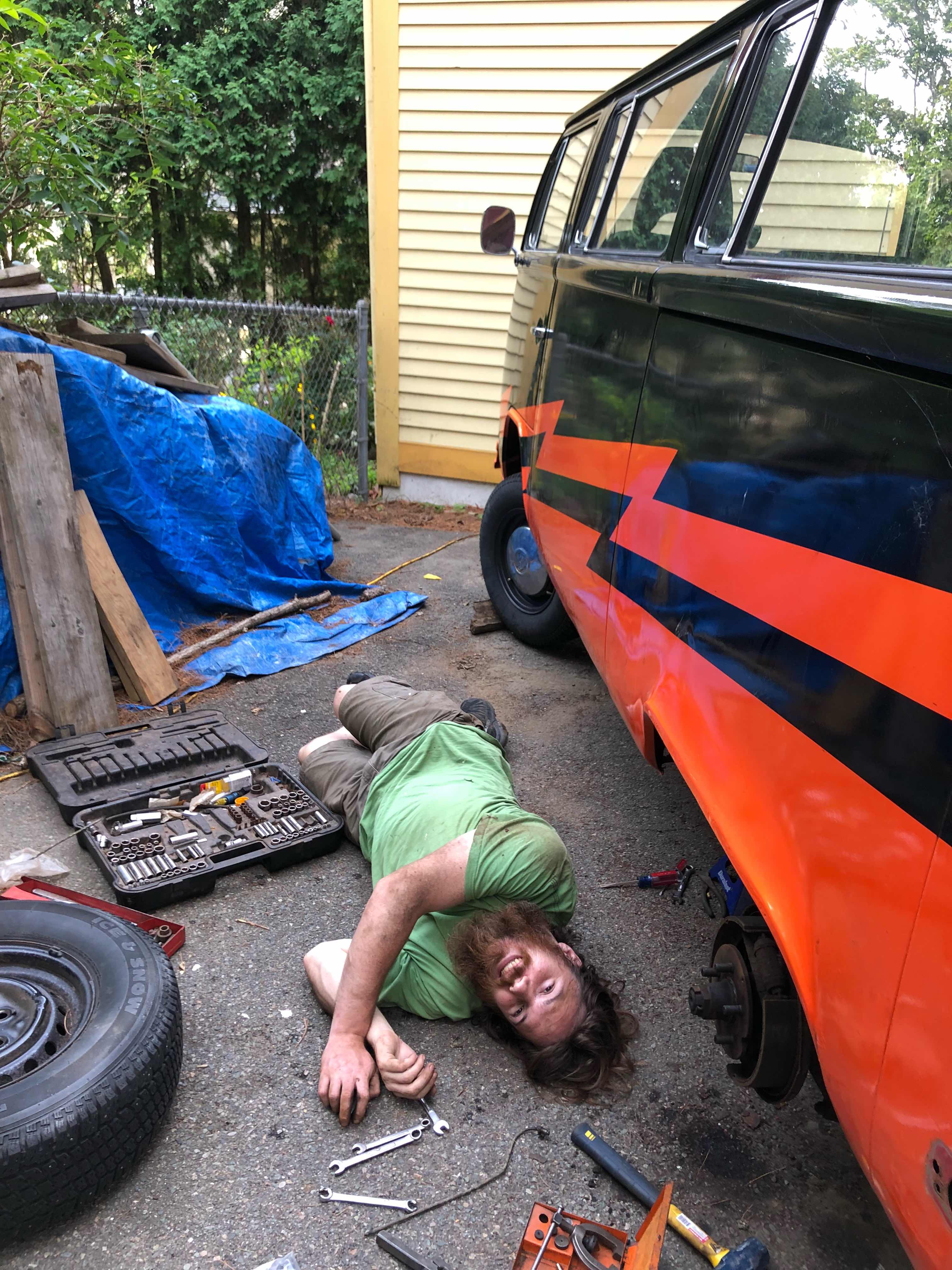 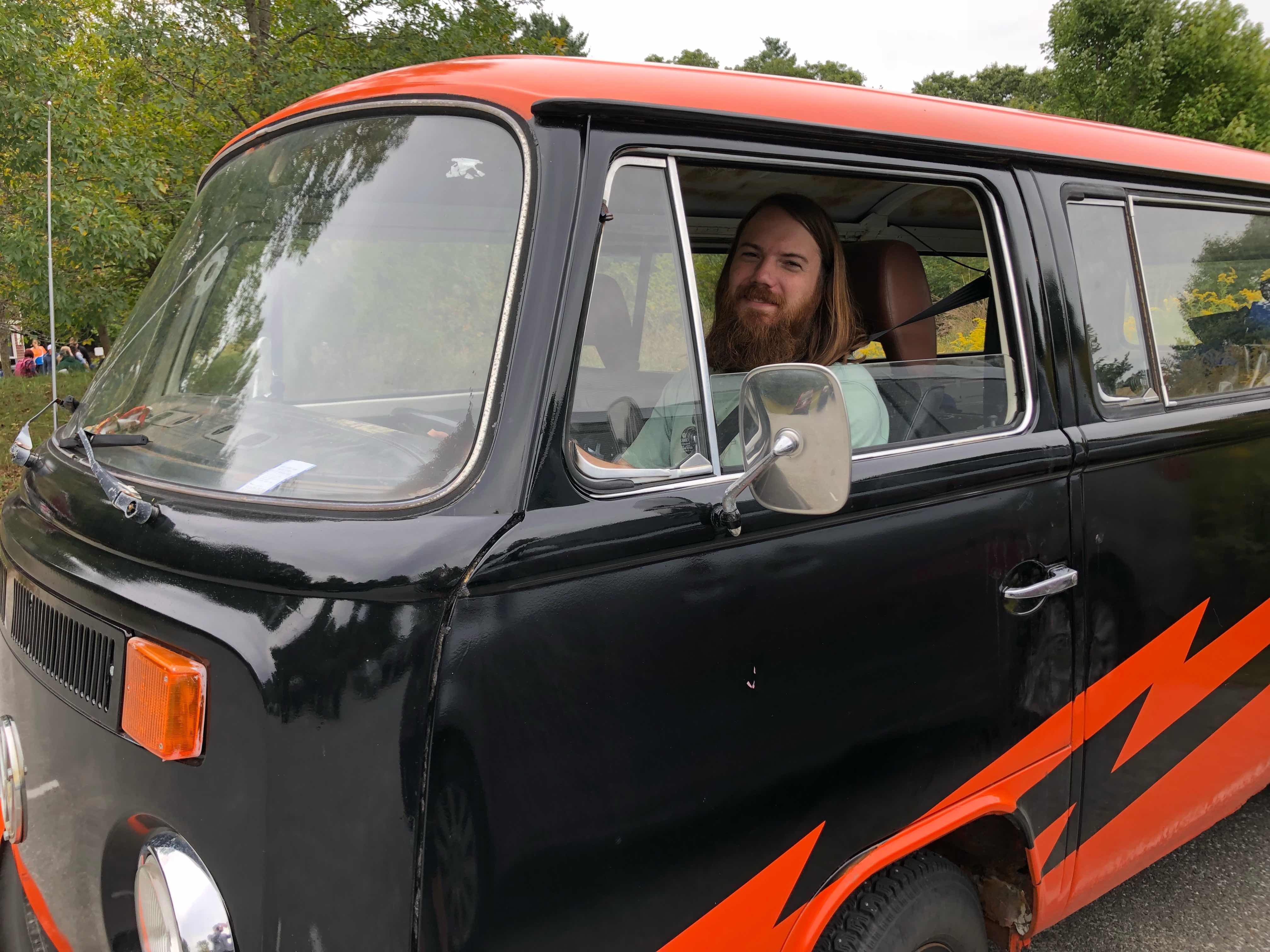 Pisgah Mountain 50k
Anyway, you came here to read about the Pisgah 50k, not my wanderings around Pawtuckaway. I'd sort of been targeting this race, partly as a lead-up to a marathon in a few weeks, but partly because I haven't run it since 2013, and I wanted to run it again and successfully. The really difficult thing is that I knew I had to let go of 2013-version-Alex, because I know I am not that fast anymore. I wish I were; from the numbers you'd think I could match past efforts, but I think a large part of this is that my mindset has changed, and I'm less willing to lay it all out there in pursuit of a result. I had re-read my report from 2013, and the memory of how hard I'd been pushing, to keep up with Kelsey and then to hold her off, was pretty fresh. I didn't know that I wanted to do that again.

So, my goal for the day was to enjoy it - I usually run well when I'm smiling. I had 50 kilometers ahead of me, of this beautiful, piney, forested trails, and I had no obligations today besides putting one foot in front of the other to cover distance. So much fun! I really was looking forward to this. Unfortunately, the weather looked to be pretty awful - humid, and warming up to the mid-eighties by midday. With an 8:45am start, I knew I'd have quite a few hours of running in uncomfortable temperatures. Ugh. As I feared, the hot weather dictated much of the race for me. 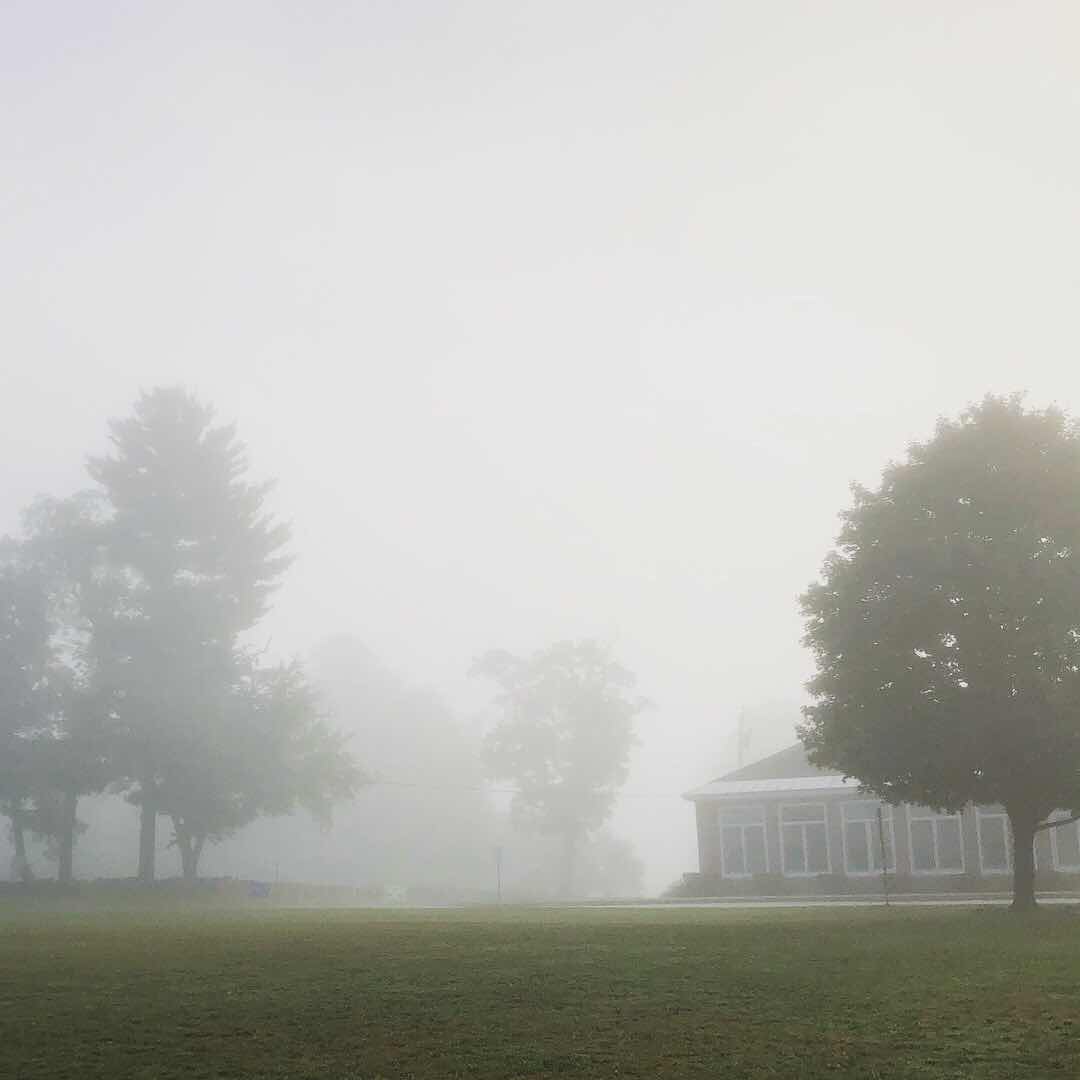 Starting in a cloud. 97% humidity.

We started in a cloud, and I noticed that my heart rate wanted to climb too easily. I tried to take it easy and just chat with people in the beginning, and it was a really enjoyable first eight miles. Somewhere along the way I came to Emily and Tom, NENSA folks, and they were stopped, Tom having smashed his knee crossing a slippery brook. He insisted he could walk just fine, so I kept going, pretty sure Emily would come flying by soon. I got to the aid station about a minute faster than my last time, which was worrisome because of the humidity (was I working too hard?!), but encouraging that the marathon training of raising my baseline speed has been working.

I walked up the road climb from there with a group of three guys, and then things started to get tough as we kept going up on the trails. Emily passed me by, and I didn't even try to match her pace, feeling gassed and too out-of-breath. I ran the downhill well, catching back up to my three guys, and ran through the aid station at the bottom, passing Emily in the process, though she soon passed me right back.

I topped up on water at the water stop around 12mi, and then forced myself to do a bunch of jogging over the next few miles to the third aid station, on the lookout for bees the whole time. Didn't want to get stung again! I was still pushing the downhills pretty hard, but taking it easier on the uphills. Somewhere in here I had my first heat shivers, not a good sign. I arrived at the third aid station and got more heat shivers, so decided to back way off and just walk all the way up Pisgah mountain.

Of the three guys I'd been running with miles 8-16ish, the gray-shirt guy ran off strongly from the aid, and I never saw him again. Black-shirt guy passed me early up the climb, but blue-shirt guy, named Joe, caught me more slowly and we chatted a bit. I kept walking, trying to bring my HR down. My right foot, which has a touch of plantar fasciitis, was really starting to hurt in here. Coming down the hill, I had to focus on running, full stride and whatnot, because I just wanted to go slowly and limp on my foot. It's hard to change gears to a higher one, but it has to be done! I caught both black-shirt and Joe coming down the hill, but I wasn't feeling awesome. It was hot, I ran out of water near the top of Pisgah mountain and thus had a mile or two of dry running, and my stomach was starting to complain about this effort in this heat.

The fourth aid station is the start and the finish of the Kilburn loop. As I topped up water, guzzling quite a bit of it, the leading woman came in, having just finished the loop. She was also leading the race. Impressive! I waddled off toward the loop as she loped off down the trail and toward the finish, and I was feeling kind of negative. My foot was really unhappy with the gravel part of the trail, my quads and hamstrings were feeling the strain of running the downhills hard, and my stomach didn't like all the water I'd just guzzled. I made a concerted effort to keep sending it down the hills but I was definitely entering survival mode, and I did a bunch more walking than I should have back up the hill.

I finally got back to the aid station, and now the shortest way back to the finish was to just follow the course. Phew. I tried hard not to limp on my foot, because I didn't want to cause some other injury from running funny, and I passed a dude who was walking, which made me realize I wasn't actually that badly off. Into the climbs up Davis hill I did some pace counting to motivate myself to keep running, and near the top I heard footsteps behind me - Joe! We shared a few miles, walking the uphills and trying not to limp the downhills, and then when we hit the gravel road I told him he better run ahead - I was going to do some walking and my stomach was really unhappy.

About 0.7mi from the end, I passed the tailgating crew, and they told me I was third woman. I chuckled, and asked if they had any cold beer. I was promptly delivered an ice cold, delicious, bubbly, IPA, and it was heavenly. Finally something that I wanted to ingest! I drank about 3/4 of it before dropping it off at the next driveway (as suggested by the tailgaters), turning and giving them a thumbs up, to a rousing cheer. Started jogging again and managed to get across the line about a minute before 4th place, so it's good I didn't take the time to finish that beer.

So, while the race wasn't everything I'd hoped, I did manage to enjoy myself out there. I know I don't run particularly well in humidity and heat, so I sort of expected my stomach to turn at some point, but that was a tough one to finish. I don't like that it was 41 minutes slower than last time, so I guess I'll have to come back next year!

Super thanks to the race director and all the volunteers - the course was lovely, very well marked, and the aid stations were friendly and stocked with all sorts of good food. Great event!