Orienteering USA Nationals were hosted by the Southern Michigan Orienteering Club and Orienteering Cincinnati, two weekends back. The joint effort meant that the venues were spread pretty far apart, but it enabled the event to happen, which was a good thing. Middle and Sprint distance races were in South Bend, Indiana, and the long distance was up near Bishop Lake, Michigan. Two states I hadn't orienteered in before! 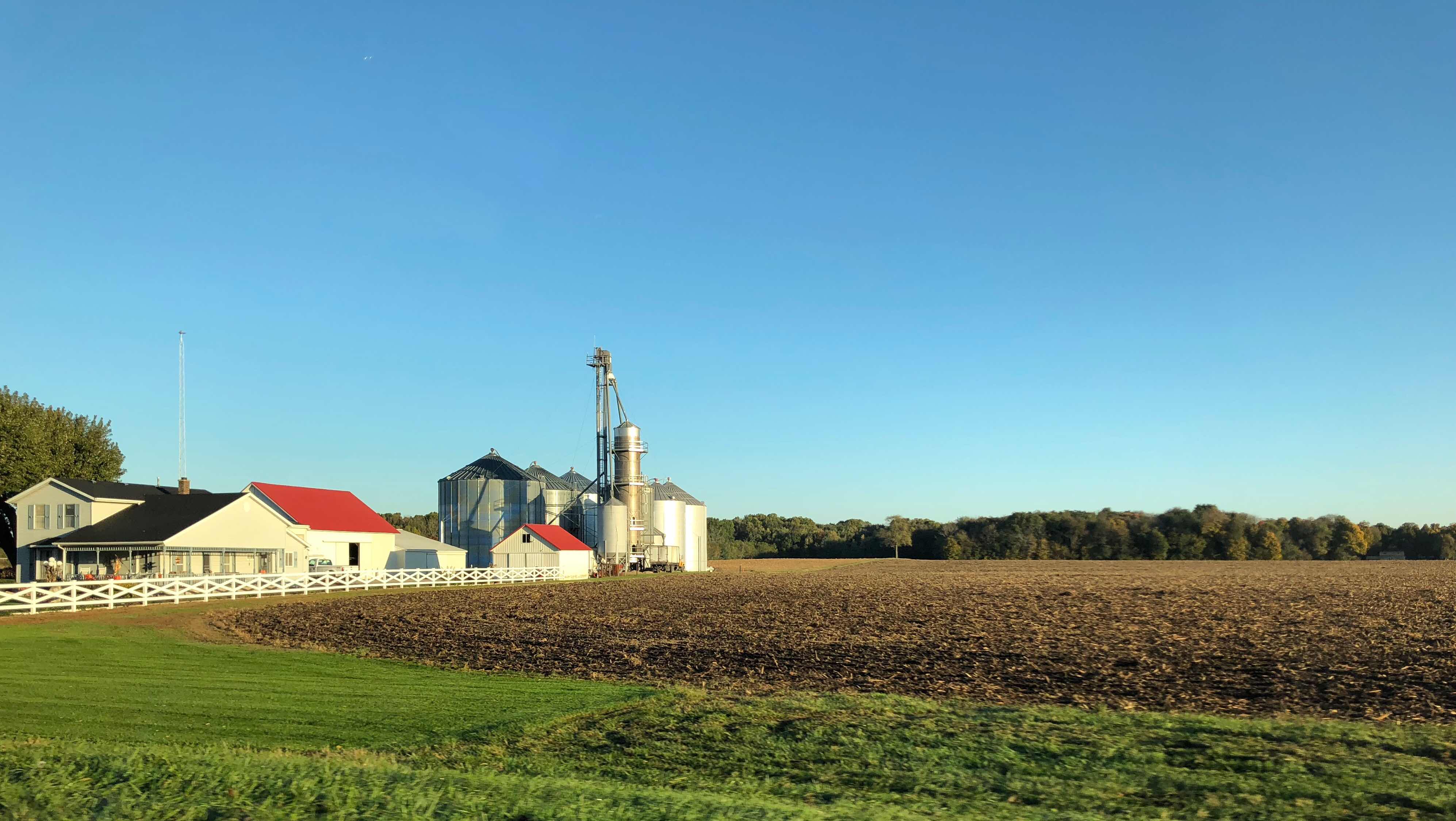 Drive from Detroit to South Bend featured a lot of this

Middle Distance
I'd had a pretty hectic week at work leading into the weekend, and combined with a very short night of sleep to catch the early flight to Detroit, I was feeling somewhat zombie-ish for Friday's middle distance race. The map, such as we'd seen before the race, looked to be a flat course, with a lot of trail route choices. I knew it would feel like a cross country race, so I tried to psych myself up, but couldn't quite tap into the right mindset. The cold soaking rain wasn't helping matters, and I would much rather have been back in the warm hotel room wrapped in a blanket.

I also badly miscalculated how much time I had before my start - I had thought I had 40 minutes, but it turned out I had 7 minutes. Whoopsie. I tried to keep the effort steady at first, to let my legs warm up, but then found myself lacking enough give-a-damns to either push hard or to push through any forest. I fell into the trap of reading one control at a time, and thus got totally caught by the trap with the uncrossable fence (that, yes, we had driven past to get into the park. D'oh).

Not seeing said uncrossable fence on my map, because I was being a little lazy with the map reading, I chose to go straight-ish out of 11, and crossed the muddy slough. That part looked so innocent on the map! I was chest-deep, with a foot stuck under branches, and wondering if that was how I was going to die. Spoiler: I got out. Shortly thereafter, I emerged from the woods and hit the fence, and had I read the whole leg, I would have just run around to the north, stayed dry, and saved a few minutes and a lot of annoyance. Ah well, orienteering. You think you're soaked through when you orienteer in the rain, but you're not *really* soaked until you've gone swimming. 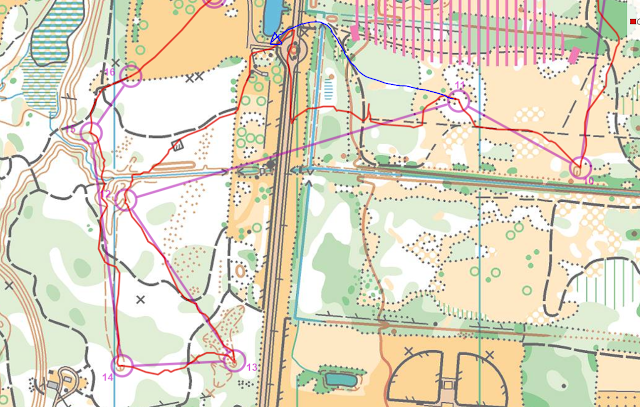 The red line is my GPS track. If you look at the beautiful piece between controls 11 and 12, you'll first see a zigzag on the trail, where I'm searching for a way through some thick multiflora rose. You can't quite tell how much time I spent wallowing in that thing blue line of muck, but that was a while, and then I had to run around the fence anyway. The thick dark blue line is the route I *should* have taken, thus saving myself a few minutes... d'oh.


The few controls in the woods after the stream-fence debacle were too few to get me back into a good mood. Mostly, I was upset that I had skimped when packing, and would thus have to wear this wet and muddy kit tomorrow, too. Anyway, I finished the race not feeling great about it, and like I'd left some 3-4 minutes out there in terms of effort and sharp navigation, but it was good enough for a silver medal behind Ali, who had blazed around the course in lightning time.

Sprint Championship
Saturday was colder than I'd expected, but in good news, my kit, that I had painstakingly rinsed out in the shower, was dry enough to wear. There were two sprints today, and the combined time would be used to crown the national champion. Ali could only race the Friday race, so given the depth of the women's field, this race was mine to lose. My recent marathon training has been a lot of slow miles, so I was somewhat worried that I wouldn't have enough get-up-and-go for sprint racing, and I was correct in my worries.

Speaking of marathon training, I was also trying to get in my last hard-ish workout on the plan. My compromise involved doing two mile repeats in the warmup for my first sprint, and while the mile repeats felt great, I could tell as I was running that my sprinting was suffering. Not surprising.

The first sprint sent us across a knee-deep ford of a cold river on the way to the second control. This wasn't cool, because my feet were now wet and frozen, and shortly thereafter I felt my lower legs lock up because of the cold. The course was relatively straightforward, and I had good sprint-flow, always knowing my exit direction and anticipating well, but I didn't have much speed to give it. That was enough to take the women's win by 35 seconds over second place, who wasn't actually US-Championship-eligible, and third place among the men, just 43 seconds behind Wyatt. 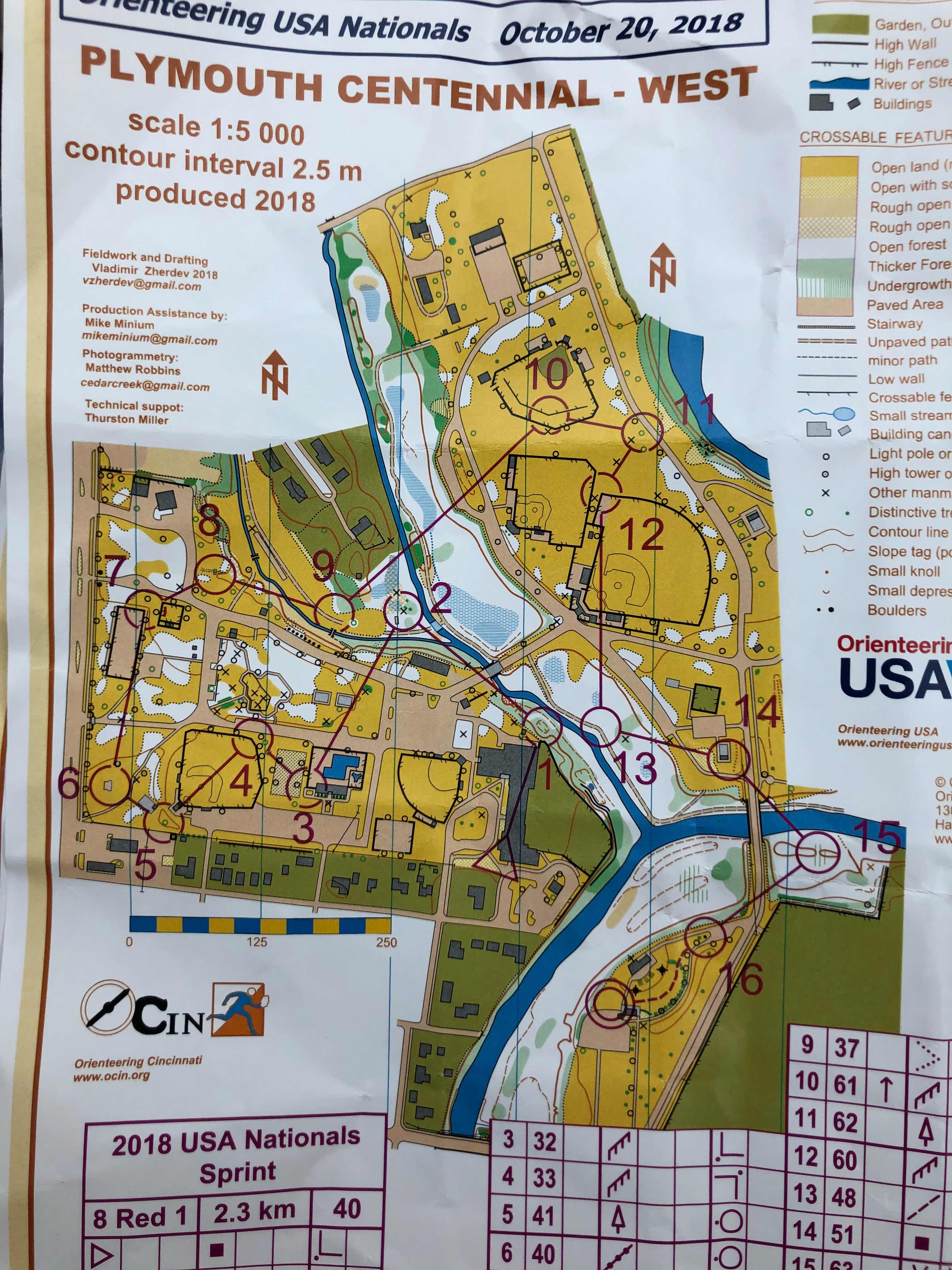 We had a short break, and then it was time for the second sprint, which promised to be more woodsy. Alena, the second place woman from the morning's sprint, was starting just 1 minute behind me, so I was worried that she'd get to hunt me down. Indeed, after a few micro-route decisions that were the wrong decisions, and one long hesitation in the floodplain near #11, she had made contact. Darn! I tried to keep up, and slowly narrowed the gap, but the race was over too quickly. At this point I was totally exhausted, the heavy warmup, two races, and all of last week's stress crashing into me all at once. And we still had a 3h drive to get to the banquet location and our hotel for the night. 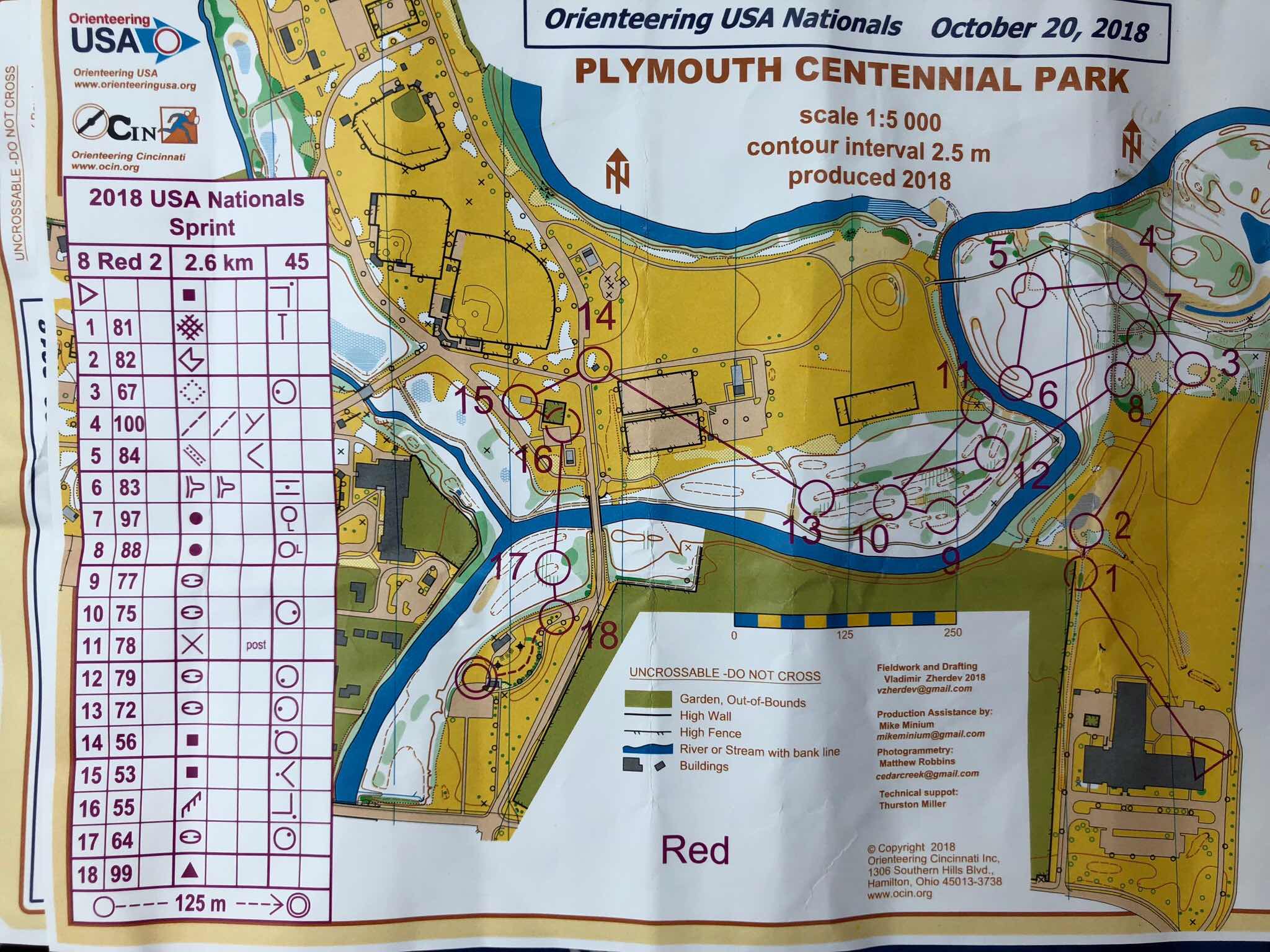 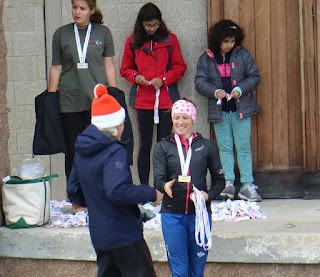 Handing out the medals after the sprint 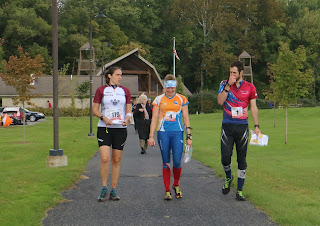 Long distance championship
It felt like morning came too soon, especially considering how far west in the time zone we were. Pitch black at 8am! Today's race, up near Bishop Lake, promised to be some interesting glaciated terrain, again with relatively thick undergrowth, but at least some good navigational challenges to keep things interesting. It also promised to be even colder than Saturday, with the front that had blown through and brought a little ice and snow the night before. Exciting!

My plan for this race was to keep the effort pretty low, and treat it as a long training run. See the above thing about the marathon. I knew that my nearest F21 competitors would likely be running even slower, and I didn't want to totally trash my taper by building on the fatigue I was already feeling. So, the intention was to have perfectly clean navigation, looking for good micro-routes, sending it down the hills, and taking it easy on the uphills. This plan in general went pretty well, and the slower pace definitely helped me have clean navigation. 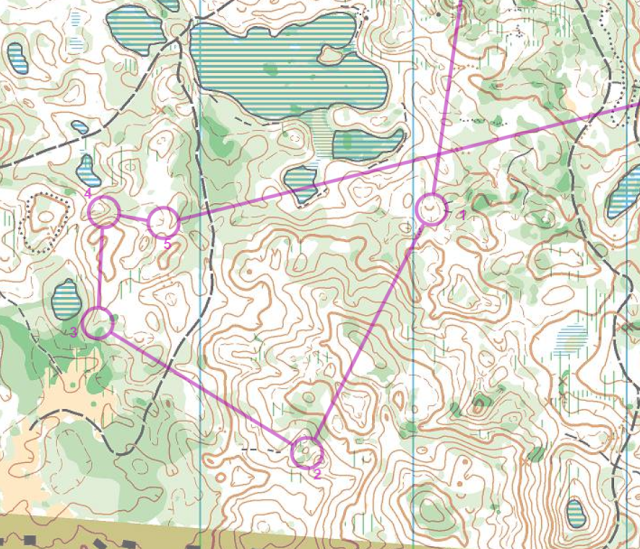 This was interesting terrain and a fun course, not quite as nasty vegetation as I'd anticipated, despite plenty of green, which was well-used as a navigational challenge. I started out carefully, not sure how I'd deal with the glacial terrain, and made a couple hesitation-errors, but got into my flow moved steadily. I found myself choosing straight-ish routes, and reading the topography well enough. While this certainly wasn't a super fast time for me, it was good enough to beat all the women, even Alena, the speedy non-US-eligible runner! I was very pleased with that, as it was a little unexpected. Woo! 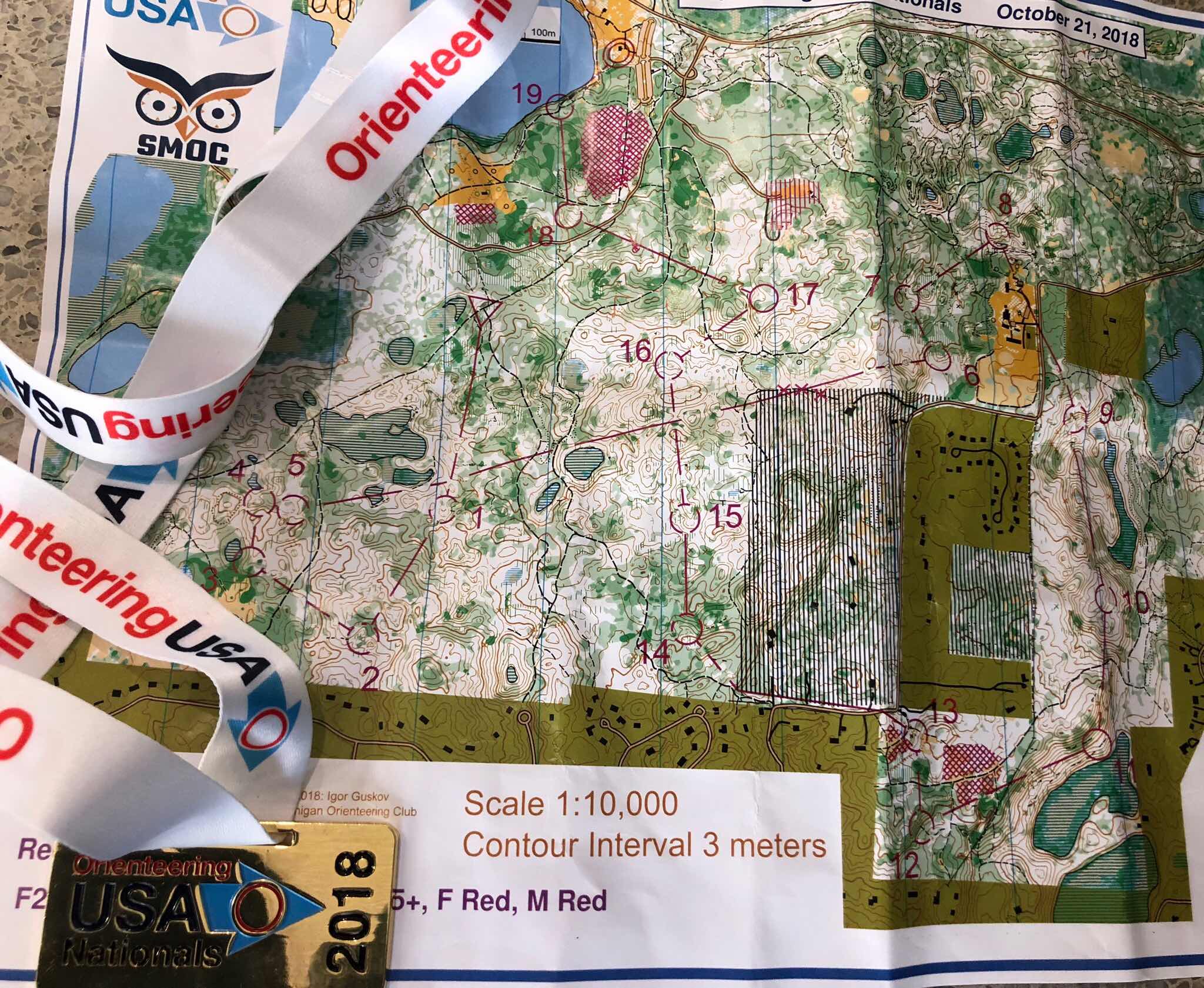 This is my last year racing in the elite category as per age classes. I can always choose to keep running against the elites, and may well do that for a while, but I also have permission to race the "old ladies' next year. Looking forward to it, but it was nice to go out with two gold medals and a silver!
Posted by Alex at 12:57 PM