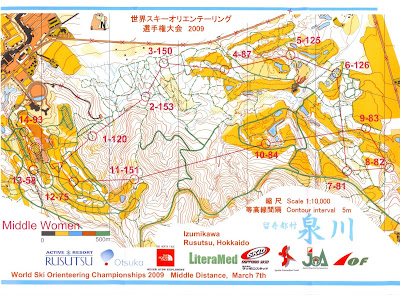 It was really windy today, which meant it was good to be short to tuck, but bad to be light because I got blown all over. I felt like I had a lot of small mistakes, especially at first. The course started by going down the wall we had come up yesterday, with a control half way down. I tried to slide on my butt, and I kept punching through the crust with my butt, so I had to sort of scooter down in bumps. It was neither fast nor sexy. I made it down the rest of the hill no problem, and spiked 2, which was in the marsh. I decided to try to follow the river rather than read the map, and that was easier, I think.

3 was also in the marsh, and I was trying to follow the trails there, but they were all blown in so you couldn't see them too well. This led to some problems, until I recognized that it was a foot-o course, not a ski-o course, so I skied all over the crust with no problems. 4 and 5 were still in a little maze, sort of next to the fields from yesterday. I passed Candi looking lost at the top of a little rise, and dropped into the marsh to get 6, but it took a while for some reason. Then I was going to 7 and I saw the Russian from 4 min back catching up to me, and I got to 7 ahead of her but barely. I took a different route out to the field and got there at the same time as the Russian so I followed her across the field and into the other maze to get 8. At this point the Lithuanian from 2min back caught up, and I went behind her, but she was skiing slowly, so I went back around her crossing the field to 9. I was starting to get the hang of just crust skating, and the wind was pushing me in the right direction. I had the 3rd fastest split going to 9, and almost caught back up to the Russian.

I have to admit, I sort of followed the Russian towards 10, but, I was following on my map and I knew where I was. I cut across the field too early to 10, but I had to avoid the fence so I guess I had to cut where I did. 11 was at the base of the climb, and 12 was at the top of the hill, and I tried to book it up the long skating trail. I think I attacked it too hard, though, and my boot was too tight, because my left calf got super cramped up about halfway up. I passed Sue and cheered her on, and then got worried she'd catch back up because I'd slowed down so much. I finally got to the top and between the oxygen debt and the tight calf I sort of stumbled around until I got to 12. Then I did a smart thing and used my mad foot-o skillz to get down the golf course, just following the edge of the forest. But I went too far to my left, lost maybe 20s getting to 13. Then it was straight over to the go control, and it was so windy I almost got blown back up the hill. gah.

Anyway, other than a bunch of hesitations in the beginning, it was a pretty ok race. I was bummed to lose the Russian going up the hill, but my calf was blowing up, I think my boot was just too tight. Ended up 25th, 21% back. Splits. This is a good race, one of the best the Americans have ever had, but I'm not entirely satisfied with my results in the individual races this championships. I guess if I were complacent in my results I would not keep trying to improve myself.

Tomorrow is the relay, I am the first leg, followed by Julie and Candi.
Posted by Alex at 7:47 AM