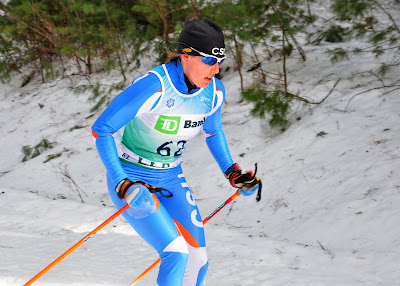 The Silver Fox Trot is the last skate race of the season, and it's usually held at Oak Hill. I've managed to not race here since 2004, I think, and all I could remember of the course was that there was an endless uphill in a field, and there was a downhill that included a sharp turn and a steep drop-off, with running water at the bottom of the cliff, for if you didn't make the turn. Fond memories, clearly. Anyway, after skiing the course a couple times in warmup, I determined that the hill in the field wasn't actually all that endless, and the turn by the dam wasn't actually all that scary. The course was actually quite fun to ski - good rollers, a couple good S-turns near the end, and a nice long V2 grind for about a km somewhere in there.

I started early, and already the course was changing - some of the hills were transformed and glazed, where they were in the sun, some were chopping up to sugar snow, and anything that had been scraped was scarily icy. I chose a stiff pair of Q1.3s to race, and just handed them over to the experienced wax team of the CSU engine, and they came back criminally fast. I didn't ski on them before the race, and as I started out, toward the first downhill S-turn out of the stadium, I couldn't help but whisper "ohhhh, shit". The skis were just flying. The next words out of my mouth were "OHHH SHIT!" as I completely failed to make the second turn of the S. An ice patch had developed in the middle, exactly where you'd expect it, and like a noob I skied right into the ice patch, skittered to the side, and couldn't turn my skis fast enough to avoid going off the trail. I got up quickly, but my momentum was shot, and I'd just wasted a few seconds untangling myself from a snowbank.

As I started skiing I could tell that I just wasn't relaxed - I was skittering all over the place, even though the footing was pretty good. Pre-race nerves that just wouldn't calm down, I felt so wobbly and unsure of myself after the crash. Kept repeating "its a 10km, you have time", but that didn't help. Finally I hit the first hill, and it was a relief to start working hard, and lose the jitters. I could hear the Dartmouth girl, who'd started 30s behind me, a little ways back, but my goal for the race was to just ski my own race, and ignore all the fast people around me.

It was climbing this first bump that I discovered my left boot was way too tight. I'd had enough time before the start to put on dry socks (oh the luxury), but when I re-tied my boots, I did it too tight. I did this last year at the Birkie, and you'd think I'd have learned from my mistake. I remembered that I'd suffered through 6km at the Birkie before cracking and loosening the boot, so I tried to just ignore the fact that my left foot was going numb. Unfortunately, when you're already feeling like you can't glide, being unable to feel your foot is actually a bit of a handicap. Sigh.

By the time I hit the endless hill in the field, the Dartmouth girl (Hilary McNamee) had caught up to me, and she was being cheered loudly by the coaches at the top. I snuck in behind her, and discovered that my skis were faster, which gave me a bit of a breather as we headed into the downhills. I made it across the dam without losing much speed, and as we started climbing, at the 3km mark, I noticed that she was coach-skating the steep part. In my naivety, I thought maybe the Dartmouth women's team had decided this was the fastest way to climb the hill, but when she didn't speed up as the hill flattened out, I realized she was just slow. So I passed her, and by now, I was feeling more stable on my feet, aside from the whole numb-left-foot issue. 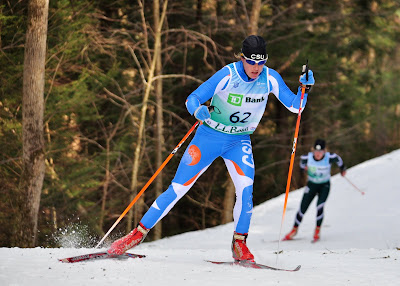 I did scrub a little speed on the S-turns heading back into the stadium - not proud to admit that, but, I was running scared, and really just didn't want to fall again. Back onto the course, and I skied the first S-turn really badly again. As I finished the corner, slowly, I said to a volunteer "I swear, I can actually ski downhills!", and then I realized that A) I sounded ridiculous, and B) I shouldn't care what the volunteers are thinking of me. A UNH skier was struggling up the hills in front of me, and I used her as my rabbit, catching another Dartmouth girl (both on their first lap) on my way. The hill in the field was brutally windy, and it was hard to get a forward position on my left leg, but the sooner I got to the top of that damn hill, the sooner I could go downhill, so I kept plugging. I probably should have pushed a bit harder on the last flat part, because with a course that finishes on a downhill, the finish isn't actually at the finish, but hindsight is always 20-20.

I finished with a decent sprint, but I still ended up nearly three minutes back of Hannah Dreissigacker, the winner of the women's field, good for 20th place. It was about 45 seconds to 10th place, which is where I was seeded - I don't think that would have been out of reach with a good race. The good news is my body felt pretty good, after a few easy days, so hopefully the classic race tomorrow goes well. Nice loose boots. And cold klister!

Now is the point where I remember that I broke my good cold klister skis up at Mont Sainte Anne.
Posted by Alex at 9:34 PM