I'm noticing a trend - I need to take a vacation after a week of ski camp. This is problematic, because ski camps generally take up my vacation time. 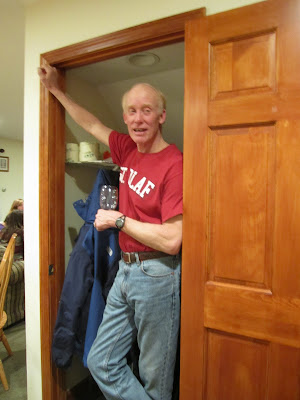 Jamie is pictured here, standing in the doorway to my broom closet bedroom. I was mostly sleeping on the couch, but using the closet to spread out my stinky ski clothes, and find some privacy for phonecalls and stuff. After sleeping in a broom closet, of course you need a vacation!

Anyway, Ed has decided that he is going to tap the maple trees on Bullitt land up in VT, and have his cousin Rob do all the evaporation, so he is in the midst of carrying out some grand scheme to set out the lines and get everything ready before the sap starts running. Rob used to do that area, but I guess it was too much work, regardless, they have these grand plans to eventually have 1000 taps. Ridiculous. I get roped into Ed's grand schemes, which is fine, mostly, unless its snowing heavily and very windy. I don't really enjoy snowshoeing around the woods in a snowstorm, and after half a day of that, I bailed on Ed and went inside to drink hot cocoa and read my book. I was feeling wimpy. 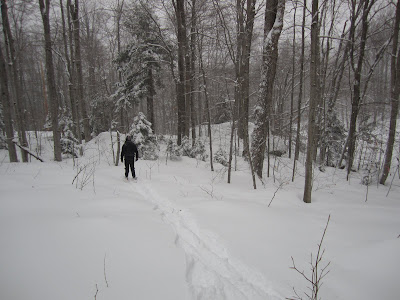 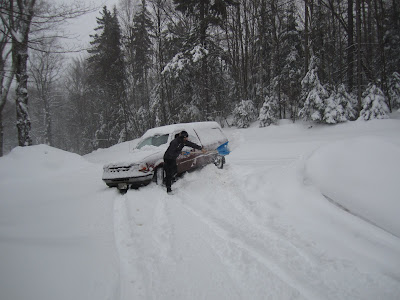 And because Ed's truck was involved, we got it stuck. Naturally.

Ed expects to spend a lot more time up there running lines to maple trees, he has the mainline set up, and all the little secondary lines are going to run into that. The mainline will empty into a tank. Rob will drive by and empty the tank into his tank of sap in his truck, and then he will turn it into deliciousness at the sugar shack. I'll help with that part, all you have to do is watch water boil!

After a few nights of 12hrs or more of sleep, I'm feeling pretty good, and ready to take on the world again. Starting to get really excited about the ski-o world champs, all pumped to train really quality workouts for it, but its doing this freezing rain thing in Amherst, which makes me a lot less excited to train hard. Booo.
Posted by Alex at 9:39 AM