Winter came on a Saturday 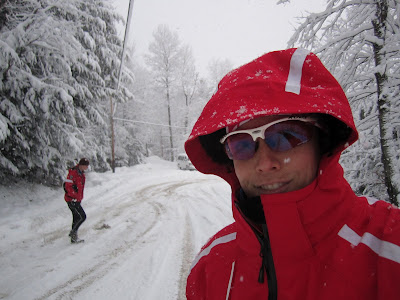 Wahoo! Winter! (Tony is sliding down the road in his sneakers, behind me - slippery!)

Checking the forecast for the Middlebury carnival, which had been moved to Trapps due to low snow, some snow was due to fall. What accuweather failed to mention was the ferocity with which it was going to storm. Snow started to fall lightly on Friday night, and by Saturday morning, winter had arrived, and was very definitely still in the process of coming through the door. 20+ mph winds just added to the fun!
The joy of waxing when it is around 30 degrees and snowing, is that there is a point at which wax no longer works - it isn't sticky enough to get kick, but it is too sticky for the falling snow, so you get "icing" - snow sticking to the bottoms of your skis. The solution to this is to use a no-wax ski that is not a fishscale base, but has a section of the base that is just roughed up with sandpaper. They actually make a special ski for this, called a "zero" ski - for use around zero degrees centigrade when it's snowing. We were sort of hoping it would be zeroes weather, because then we could just send people out on their zeroes, but it stayed 1-2 degrees too cold for that, necessitating kick wax. The good news is that means it's easy kick waxing, just some sort of blue hardwax. Rode superblue, in fact.
But I'm getting ahead of myself here. The morning started when Chris, Tony, and I attempted to drive the equipment van up the mountain to Trapps. They hadn't plowed in an hour or so, and the snow was warm enough that it was greasy and slick. The equipment van don't got no snowtires, so basically, we couldn't get up to the venue. Thankfully, one of the parents drives a subaru, and he came down the hill to bail us out and get Tony and I up to the venue to start testing waxes. 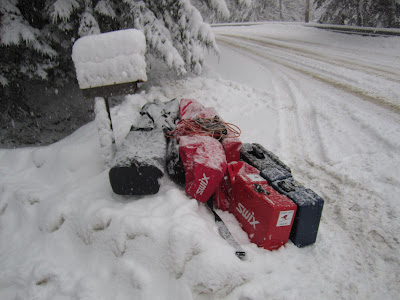 Someone come help us! We don't have that much stuff... just four massive ski bags, two wax tables, and three waxboxes! 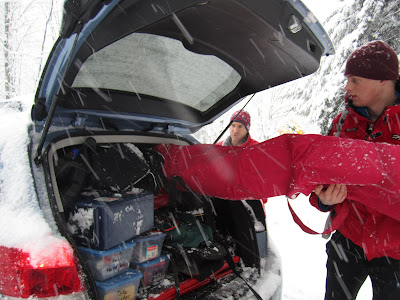 Loading Jim's car to the roof. We managed to get everything in there, but it was pretty tight.
The other joy of snowstorms at 20+mph winds is that it's really hard to get the wax to stick to the ski, when you're applying it, if there are snowflakes landing on the ski. So, we attempted to set up the Harvard tent, but when it's blowing that hard, pop-up tents like to catch the wind and blow away and generally crumple upon landing. So, we lashed the tent down to three separate vehicles, and bungeed a heavy toolbox to the center, to dampen some of the shaking. This was mostly effective; at the very least we didn't lose the tent. 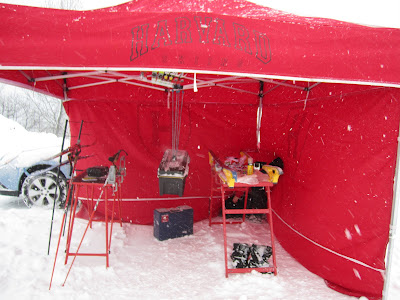 So then the joy of applying the wax - it was basically impossible to do this on your own. It took both coaches tag-teaming a ski - one person attempts to shield the ski from the snow with their body, while aiming the heatgun at the ski to melt the snowflakes, and the other person frantically applies the wax. This was neither fast nor pretty, but it got the job done. After that, it's out into the storm to watch the races. I don't think racing was all that much fun today, either. The wind and snow obliterated the tracks, but as far as I know, we didn't lose any skiers. 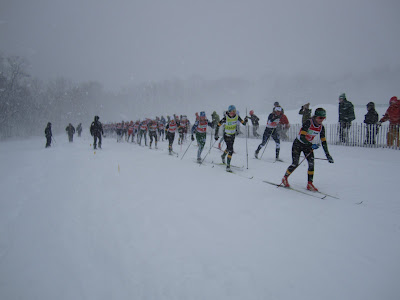 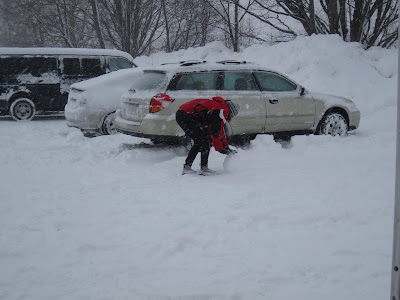 Taking advantage of the wet sticky snow and rolling a snowball. 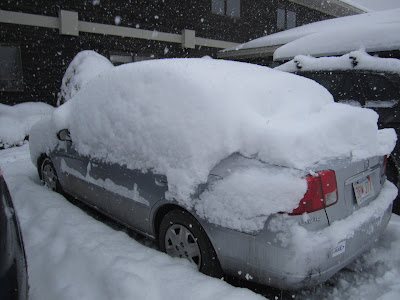 By the end of the day, my car had about 2' of snow on it, but this was really a storm centered on Stowe - within a half hour, the roads were clear. Winter happened on a Saturday this year, and it only happened in Stowe.
Posted by Alex at 9:24 AM