A while back, the idea was floated that we should have a 5-day event, but we'd actually only take two days.  Being crazy, all five of us in the western Mass. renegade O' club agreed that this was a great idea, and went about putting on the meet, as a fundraiser for the US ski-o team.  Peter, our fearless leader, handled most of the stress of meet directing, and put a nice write-up here from the meet.  Overall, things went great, and we earned a bunch of money to help Ali and me get to Kazakhstan next winter, along with our ski-o teammates.

The first two "days" were both OUSA-sanctioned A-meets, at Peter's new map at Earl's Trails, which also happens to be an amazing place to ride mountain bikes.  And now it's mapped.  Worlds colliding!  Those two events went off great, and then it was my turn, hosting a sprint at the UMass campus.  That went off pretty great too, and then many of the competitors ended up at Bub's barbecue, which was also great.  So far, so good! 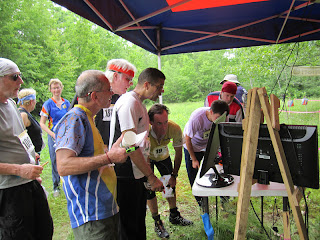 Ed did his usual awesome displays, which people seem to enjoy.  He and Valerie, pictured below, are awesome people to have on your side when you're putting on a meet. 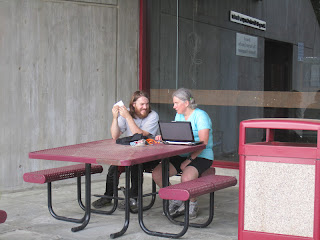 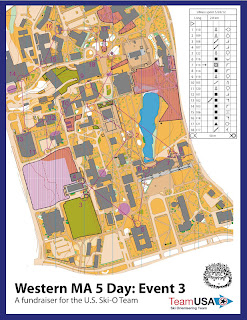 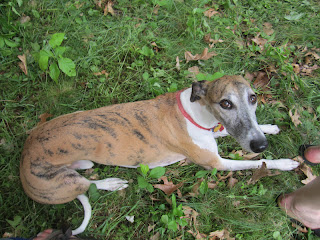 Presto was pretty done with this whole running thing after his second race. 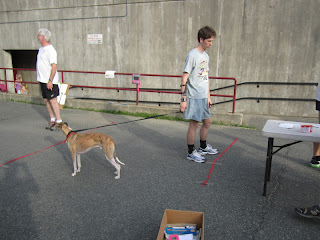 I particularly like this one - Brendan is all set to go do another race, and Presto was NOT interested in moving forward.  Eventually they came to some sort of agreement and started out. 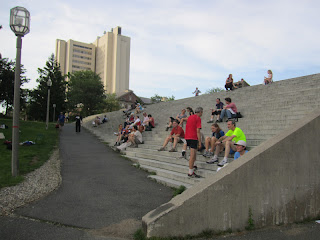 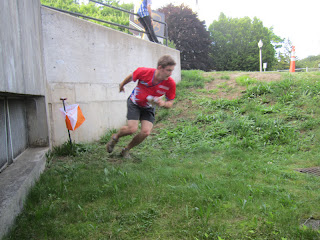 Sunday we had two more days of racing, the first a sprint at Cemetery Hill, in Northampton.  I actually got to race in this one, and I had a really good time, although my legs were pretty pooped.  I was the first lady, but a bunch of guys beat me, and I ended up 10th (of ~50).  From there, we all relocated to Mount Tom, for the last, and hardest, day of racing.  It was basically a one-man relay, with a lot of hills and rocks and mosquitoes to deal with, and by the end I was ready to lie on the grass and never move again.  I tried that for a while, but eventually I had to actually move and do useful stuff.  It was pretty nice to have a three day weekend, if only because we could spend Monday doing nothing at all useful. 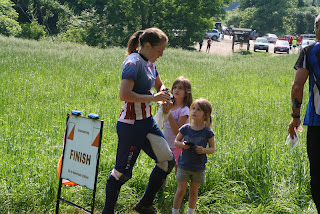 Finishing up the Cemetery Hill sprint in front of two of the cutest spectators, who had been charged to cheer loudly. 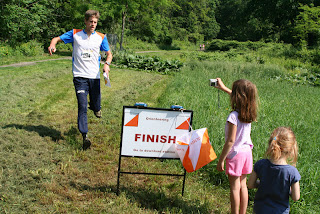 They got more animated when their dad came down the finish chute. 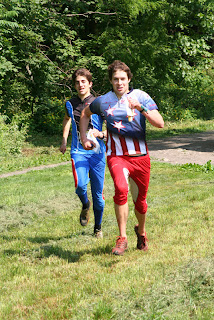 Giacomo and Carl sprinting for the finish; I didn't get Giacomo (he won), but I did beat Carl!  Pays to go in the right direction!
Results.

This ends the last of my big training weeks - now it's time to sharpen and taper, and then I get to run up a big hill with a number pinned to my chest.  Wahoo!
Posted by Alex at 2:01 PM

Well, I was gonna put up a sandwich board with color photos and descriptions at our next meet ( http://www.runbosco.com/search/label/Salmon%20La%20Sac%2012 )..

and I even wrote up a through preview..

BUT WHAT'S ON THOSE MONITORS?? Tell me about the display!

I think those are Valerie's monitors, from QOC, though Ed also has a set-up of monitors. They're displaying results, for each class.