This may have been two weekends ago, but was awesome enough to warrant a blog post.

The Billygoat is this awesome orienteering race that counts for nothing more than bragging rights - but what more is there than bragging rights?  Most importantly, the initials of last year's winners become the control codes for this year's Billygoat, so you want to make sure you're within the top 20-25, as that's the number of controls you'll typically see at a Billygoat.  This is important, man!

The day before the Billygoat, the US Team ran a fundraiser sprint, called the Speedygoat.  Ed and I were on hand to help out with all aspects of it, though really Ed does the heavy lifting here, with work on the results and download side of the table.  Ali was course setter, and she and Ed got all the wrinkles ironed out with plenty of time, so test ran the relay, in full dress rehearsal complete with tagging. 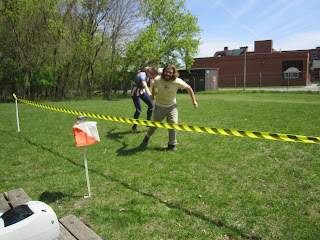 The actual sprint relay went really well - I teamed up with Giacomo, a young speedster who put us into first place on the first leg, but unfortunately, I couldn't hold the position, and we ended up fourth, though the first mixed team.  Below, Giacomo leading out the pack. 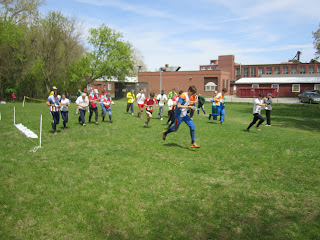 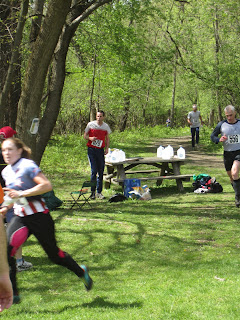 Alex coming in for the tag. 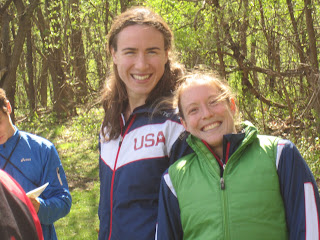 With all the speedygoating over for the day, the real showdown was on Sunday, up at Moreau State Park.  I neglected to do a warmup, precisely because I had so much extra time upon arriving at the venue.  This wasn't a great plan, and my calves completely blew up on the way to the first control, which involved a 200m climb.  Ugggh.  It took about a half hour of running on flatter stuff at a slow speed for my calves to recover, and by the time they did, I was alone.  After the first drinks control, though, I started to see people, and picked up the pace a little.  I had a loose group of four guys running with me from #8-21, and then disaster struck.

I lost my hair band.

I know, I know, this is ridiculous, but without my hair tied back in a ponytail, I had sweaty long hair all over my face and I couldn't see a darn thing.  I had ducked under a tree, but gotten my ponytail stuck on a branch, which yanked out the rubberband, or broke it, not sure which.  Luckily, #21 was near the finish, so I ran over to the pavillion and begged someone for a hairband, and then carried on, but that meant that I lost my pack, and had to finish the race alone.

Overall, it was a good race for me, pretty clean navigation; I just wish I'd been able to push the pace a little to keep up with some faster people.  Darn. 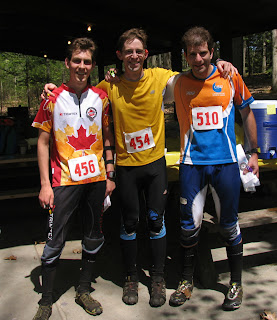 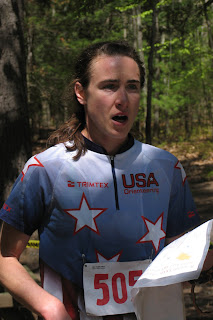 Ali took a bunch of scalps, ending up fourth - our men are running scared from her! 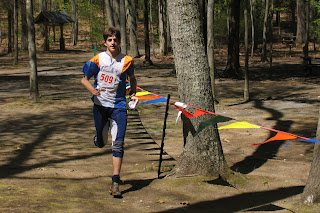 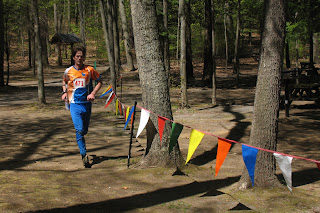 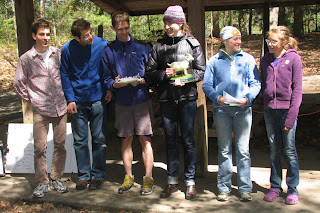 Top three men and women.  That girl to my left is Anna Breton, a 15yo - she is speedy! 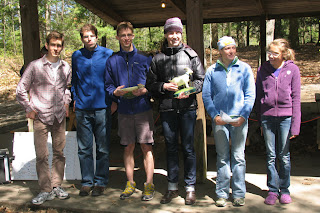 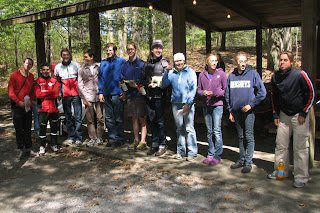 Adding in 4th and 5th for men and women.  Elina is Anna's sister, and she was the 4th woman!  Can't wait for those girls to get better at reading a map, they'll be real contenders!
Posted by Alex at 8:36 AM