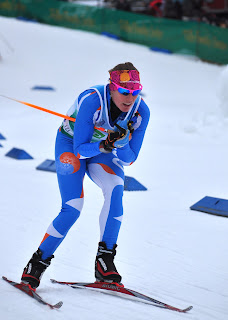 The first Eastern Cup in New England is typically the third weekend in December, which is great, because that starts the racing off early, and thanks to snowmaking, the races can usually happen somewhere.  What's not so great is that with races this early, and winters this warm, you don't get any "opener" races beforehand.  The Eastern Cups are a big deal, since it's filled with juniors all trying to qualify for Junior Nationals, and college kids trying to fight for a spot on their carnival teams, and there are more and more fast skiers on senior teams.  This is all awesome.  I was remembering back to the old days when Jess and I would be the only senior women in the field - so much has changed!  And definitely for the better.  Kudos to Janice and the competitive programs in NENSA!

This weekend opened with a classic sprint.  I'd been classic skiing exactly once so far this year, but figured, how bad could it be.  Well, pretty bad, but at least I was walking the next day, unlike the day after my previous classic ski!  Rollerskis don't do a great job training your hip flexors to absorb slipping skis.  Unfortunately, the timing crew was testing out a new system, and something went terribly wrong, wrong enough that they had to throw out the results from the first race for everybody.  They decided to run the entire prelim again, and just not do any heats, which is too bad, because heats are a ton of fun, both to race in and to watch.  Tom Smith had been recording finishes using the racesplitter app, and had put me in 24th, which is into the heats, but that missed any late-starting Canadians, of which there were 7, so the repaired results have me in 31st, exactly where I'd hoped!  But when there aren't any heats, you are less excited about only having to race once.

Anyway, with that day over, it was on to the "10k" "mass start" skate race.  Actually an individual-start, 5-lap, 8.5k, but who's counting.  Not two of my juniors, at least when it came to laps... but that's a different story.  I had a nice start spot, in the beginning of the B seed, so there were fast people going by me to carry me along.  Out of the start, Heidi Halvorsen and Amy Glen were lapping, so I put in a surge and caught up to them.  That pace felt relaxed, enough that I was leading at times, but then we hit the hill by the finish/lap and I dropped like a stone.  Not sure why, my legs were just sluggish from too much standing around the last two days I guess.  Heidi and Amy were in sight the rest of the way round lap #2, and I tried to focus on skiing smoothly and picking up time in the transitions.

Lap #3 Annie Hart caught up to me, on her last lap, and I increased the pace to keep up with her.  Amy and Heidi had finished, so I no longer had my rabbits, but Annie was a good one to ski behind, and it wasn't too hard to keep up, though clearly it was faster than I would have gone alone.  She finished, and I headed into lap 4 alone, when Hannah Smith blasted by, having just started.  She put a small gap on me, and then just hovered there, just out of reach, with a UNH girl.  This time round, I was really starting to hurt, the short wall of an uphill in the stadium was just sapping any strength from my legs.  But, one lap left, I can do anything for 4 minutes, right?  I found some strength, and passed Hannah back on the uphill in the back, working hard but not putting myself under, trying to find as much speed as I could in the transitions.  The course was starting to get more crowded, but I was moving through them pretty well, staying within myself and right at the brink of too-hard.  Once more around the field at the bottom of the hill, and then just the final rise into the finish, and I was pretty cooked.  That race was just fine as an 8.5km! 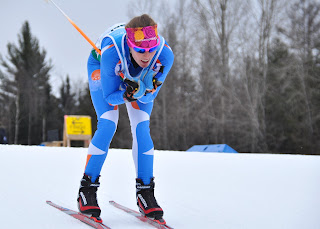 Photos thanks to Jamie Doucett!


Ended up 19th in the skate race, which is totally acceptable, given that I was seeded 21st.  Specific ski strength isn't there yet, but I'm fit, and the technique will come back.  I managed to stay ahead of all my juniors (and my ex-juniors), too, which was a nice bonus - they'll all be faster than me soon if they keep improving the way they have!