Because I definitely needed to go to Craftsbury one more weekend in a row, and because Craftsbury could remotely be construed as "on the way" from Boston to Rochester, I headed north the weekend before Christmas for a weekend of ski orienteering.  Adrian Owens, the resident US Team member in C'bury, had a fun day of racing planned for us, and Ali also managed to make C'bury on her way home from Toledo to NY, so we had some fun little head-to-head battles.

We started with a middle-distance ski-o, and thankfully the trails were just barely skiable.  Definitely more ice than snow, and there was at least one casualty taken away on a snowmobile, which certainly gave me pause as I skied past her and the first aid folks helping her out.  Eep!  This was scrappy skiing at its scrappiest, but made for some really good ski-o training and agility/balance work.  Adrian had set some really interesting courses, and I focused on looking at more than just the trails - use those contours to your advantage!  The race went fairly well, though on the tricky snow I certainly had trouble putting down the power, and skied pretty hesitantly.  Duck waddling is a totally acceptable way to climb hills in a race, right?

I did make a few mistakes - my route to #5 was pretty bad, but I didn't take splits, so I have no idea exactly *how* bad.  Other than that, most of the time losses were due to things like me thinking it would be quicker to take my skis off and run up narrow trails rather than skiing, and then being unable to get my skis back on.  Ali had an equally-bumbly race, but she ended up ~10 seconds in front of me, which isn't too bad for a 40min jaunt in the woods.  I think we both could improve from there! 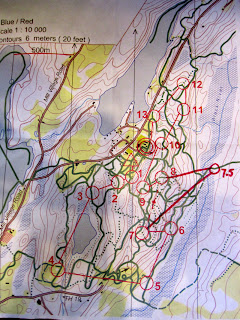 The afternoon we did a mass start sprint relay, on the snowmaking loop.  This was incredibly fun, and the teams stayed really tight, leading to some great head-to-head battles between Ali, Adrian, and I.  I managed to sneak between the two of them to win the sprint to the line, but I'd forgotten the minor detail that I then had to tag Ken, my relay partner, so that took some quick thinking to avoid a collision!

After a full day of fun, Adrian and Allison and Kestrel housed me, Ali, and Ian, and then I headed back to the center for a quick tour on Sunday morning, before finishing my drive to Rochester.  I downloaded The Count of Monte Cristo for the drive, and that's 46 hours to kill right there, so the drive went by quickly.  But the ski-o race, the subsequent training, and the great company while on the trails made my diversion by C'bury a totally worthwhile expedition! 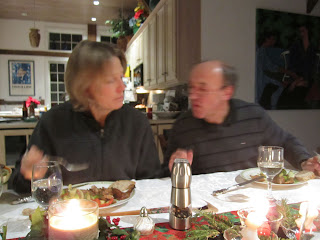 Christmas dinner - I think you got more duck than me!  no I did not, keep your hands on your own plate!