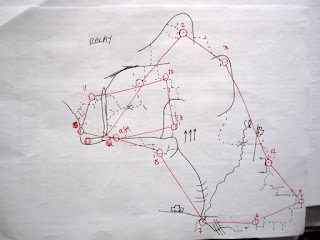 After a good amount of debate, the US women's team decided that since I am better than Ali at putting my map into the holder, I should scramble, then Anna should go, and then Ali would anchor.  We thought this would give us a decent chance against the Swiss, Czechs, and Kazakhs, who all had somewhat similar strategies, putting their fastest skier last.  The morning dawned clear, cold, and sunny, and we were PUMPED!  Relays are awesome.

Fast forward to race start, and I get my map into the holder just fine - I'd been worried about that, after professing my skillz at map-placing, what if I screwed that part up?  Luckily, it went fine, and it wasn't too hard to stay near the front, as I quickly ducked into the woods to find my first control, on the heels of Ladina Lechner of Switzerland and the Swedish chick.  Ladina and I had a different forking than Sweden, and as we headed uphill, I found that it wasn't too hard to keep up, in fact, I sort of wanted to pass her.  But I decided to hang out behind her, see what happened there, because I was still all pumped up with adrenaline from the mass start, so who knows how hard I was actually going.  We hit the first control and I've already planned for the second, and Ladina goes my route.  Leaving 1, we see Helena Randakova, of the Czech Republic, coming at us, and she joins the train as we head uphill on a wide trail.

Ladina takes a poor route to 2, and I find myself in the lead, wheee!  Some fun little swooshy trails through the woods and I'm out to the next big trail, then just a short maze to hit 3, with Ladina and Helena in tow.  I head back to the big trail as directly as I can for the downhill, and manage to contort myself into a tuck around the map holder, whooshing down the hill and finding my narrow trail junction exactly where I want it.  Thanks to the cold temperature, the snow has firmed up nicely, and I can pole with full strength; such a relief after the past few days of soft slow slush!  I skitter across a fairly sketchy pine bough bridge over a raging river, and head into the next maze.  I know where to go for 4, and I'm planning for 5, when I ski right past 4.  D'oh!  I snowplow to a stop and scootch backwards to punch the control.  This let Ladina catch up, and then we take different routes uphill to 5, and I think she picked the better one.  She and Helena are now ahead of me, barely, with a blue butt (Finland?) in view, but I decide on a different descent on the narrow trails to 6, and we part ways again.

Unfortunately, this is where disaster strikes - going over one of the frozen lumpty bumps, I break my left ski, about a foot down from the tip.  Damn.  I hold out hope that I'll still be able to glide on the ski, but on the multi-contour downhill to 6, the ski catches badly and I go tumbling into a tree.  Now it's really broken.  Slight mistake in the circle, because I took the wrong turn, being a bit frazzled, but probably only lost 20s or so to that.  I can see Helena departing 6 as I cross the field under the powerlines, but at this point we're on a wide trail, and she can V2, while I can only double pole on one foot.  We hit a steep downhill, and I manage to stay on my foot, but put my other foot on the ground near the bottom, and the ski digs in and I almost fall.  Across the flats on a big trail, and I can sort of marathon skate, using the ski-that-doesn't-glide as something to kick off of, but Helena is disappearing into the distance, and I have a big climb ahead of me.

I'm just super duper right now; it's one thing to break equipment, it's another thing to ruin your race, but it's a whole other league to do this in a relay when your teammates are waiting on you.  I am doing this awkward half-V1 thing up the hill, working real damn hard, because I'm f***ing pissed, and really just want to get back as fast as possible to get another ski and hope to pull back some time on Czech and Swiss teams.  Up the hill, Swedish Ed's buddy Carl skis up behind me with the headcam, and after a few moments of skiing behind me, notices my flopping ski.  He asks if I want his ski.  "YES!"  I briefly debate the legality of this, decide it's illegal, and hope nobody notices… this'll save oodles of time, since I still have a ways to get to the stadium, and it's hard to double pole on one foot.

Two working skis, and I attack the hill, spiking the next control and heading to the spectator control.  I don't see anyone in the stadium loop, but figure maybe I can at least pull back some time as I do the last kilometer or so, spiking the controls and still just f***ing pissed, working damn hard.  I tag off to Anna maybe a minute behind the Czechs, but I know we're out of it, now.  The anger I'd skied with the last three kms fades to disappointment, and a feeling I've let down the team.  I know that anything can happen in ski-o, but it's still a bummer.  Anna skis really well, but still gets passed by Kazakhstan and Norway (the first girl from Norway got mega-lost, so I beat her in by 3min).  Ali goes out, and the gaps are just too big to make up.  We finish 8th, tying our finish from two years ago, but this time only out of 8 teams.  I'm still proud of us - I think we all skied well, and with the extra 2min, it would still have been a challenge to hold off Kazakhstan and try to take down Czech Republic, but at least Ali would have had someone to chase down.

I guess this means I can't retire from ski-o yet.  That top-6 is totally attainable. 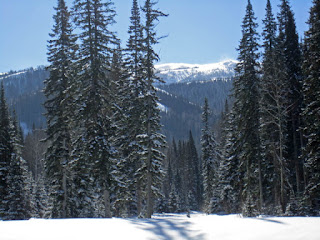 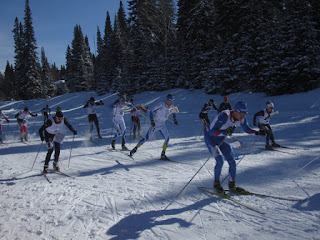 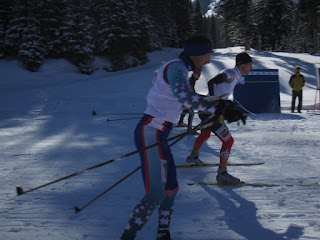 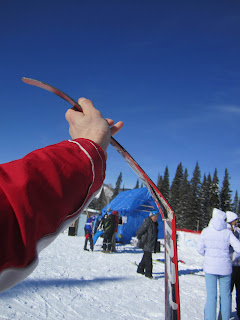 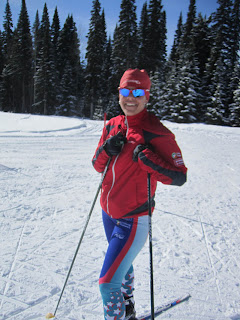 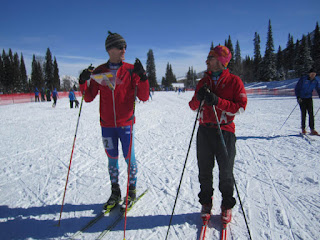 Greg and Adrian in the sunshine. 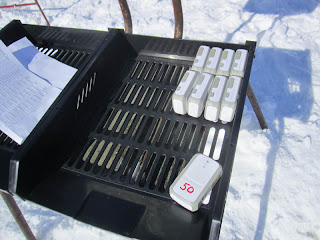 Ed, this one's for you - these are the GPS loggers. 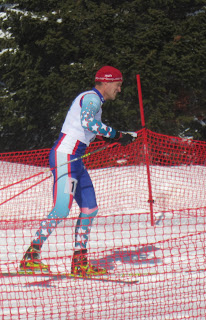 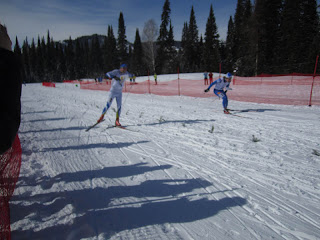 Sweden and Finland racing to the finish - Sweden won, by a boot size or so. 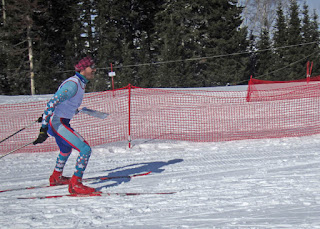 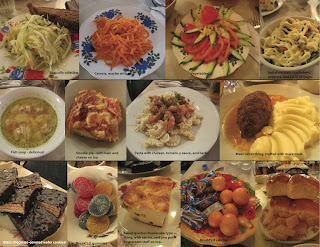 Another compilation of Kazakh/Russian food.  A mix of breakfast cookies, cabbage, and unidentifiable meat.  Yum!

Great write up Alex. And way to hang in there with the broken ski. I admire your determination!