The sprint race kicked off the week of World Championships here.  Pretty flat courses, but incredibly technical, spaghetti networks of narrow trails, and not much skiing on the large trails.  Ali and I did some extensive wax testing the day before, sort of praying that the weather forecast would A) be correct, and B) hold true to what it said.  It's hard to set up a testing scheme when you don't have any matched skis except in a pair, and you also need to be testing the various skis against each other, but in the end, I think we came up with the fastest combination given our resources.  We have a decent setup for waxing on the balcony, with a nice view of the forest (and a mountain, when it's clear!), and an extension cord for the iron.  The only drawback is that occasionally large chunks of snow fall off the roof, and the roof only overhangs the balcony by a foot or so, so those large chunks of snow are quite close to your head!

Sprint morning rolled around and there was a decent amount of fresh snow on top of the wet slush from yesterday, maybe 4 inches.  This didn't really change the wax, though I quickly threw one more pair of skis into the mix for testing, and they ended up being the winners.  The trails were soft, since despite the new snow, we hadn't quite hit freezing overnight, and everything was just mushy, though the snow packed down once people skied on it.  I started early - there are very small fields here, because quite a few countries just didn't come, and the countries that didn't come are the "second tier" countries, like ours, that exist to make me feel better about my ski racing.  Of course Russia, Finland, Sweden and Norway brought full teams!  So, even though I barely qualified for the red group, there weren't too many skiers ahead of me.  Yay for breaking trail!

The race ended up being a bit disappointing.  I was using a bad technique for ski-o, that involved staring at the map for way too long, and because of this, I fell down in a very unfortunate spot, just before the steepest uphill of the course, because my tips had crossed while I was in the air coming off a jump and was still looking at my map.  D'oh!  That probably cost me 45 seconds, which is quite a lot in a 14-minute race.  But worse than falling down was when I made two consecutive mistakes, because I had neglected to make a good plan to get to the control, and I lost another 1.5 minutes to that.  Shortly after that, I had another unfortunate mishap, because I was reaching across my body to punch at a control, leaning heavily on the other pole, and that pole suddenly gave way, and sunk into the snow all the way to the grip.  Naturally, I fell on top of it.  No good!  I couldn't extricate myself from that position quickly, it probably took 20 seconds or more.  Arrrgh!  So, in the end, not a great race, and quite frustrating.  Thankfully, I had another chance to play ski-o, the next day!

The middle distance day dawned to extremely high winds.  High enough that I think in another country, they might have canceled the races due to danger of trees falling on people's heads, but not in Kazakhstan!  By 9am, it was raining, and soon it was raining quite heavily.  Yay for adventures!  I headed out to the start the minimum amount of time I could leave for a warmup, and soon I was warm, if wet, and had pep-talked myself into being quite excited for a good hard middle distance race!

Out of the start, my skis were ROCKETS on the machine-groomed snow in the stadium, and we headed out across the road and down to the river, on trails that had clearly been packed during the rainstorm - very fast through the slush!  I nailed my first control, which is a great feeling, and I settled down to the job of getting myself through the course as fast as Alex-ly possible.  A small mistake on 2, just a hesitation, really, and then there was a long climb on narrow trails to 3, which I think I did quite well, relative to yesterday's narrow trail disasters.  By the time I got to 4, I had my 2-minute girl in my sights, and had just passed Anna, one of my teammates, from 4 minutes back.  I was really having fun out there!

But then, the course came back across the river and started climbing, and suddenly I was on sloooow, untransformed, completely sopping wet snow.  This stuff is slow.  I put my head down and just started working, telling myself that everybody else would have just as slow skis, but it became a lot less fun and a lot more work.  There was a little loop through 5-6-7, and then from 7-8, I came on the same trail I'd taken to get to 5.  Only, there was a subtle difference - this time, a massive conifer had fallen across the trail.  Wait, what??  Unperturbed, I snapped my skis off, hopped over the tree, and carried on.  Only a short time later, on a narrow trail, I came across another giant tree down, this time really blocking the way.  Quick recalculation of routes, and I carried on.  Trees falling everywhere, but I wasn't going to let that get to me.

I think I may have started out a bit too fast, because by the time I hit the climb to #11, I was pretty cooked.  The snow was just so soft and suction-y, that even though I was climbing on a nice wide trail, it was like a mushy pile of goo.  I even had to double pole the downhills, now.  I made one or two dubious route choices between 11 and the finish, but eventually got there, sopping wet, and feeling like I'd truly gotten my money's worth of adventure for the day.  The effort (and it was quite an effort in that slow snow!) was enough for 24th, which rivals my second-best placing at WOC, but the time was not as good as I had hoped, which was disappointing.  But, there are a lot of factors that go into ski orienteering, and I can think of quite a few places where I could have picked up time and done better, so next race, I will improve.

Tomorrow is the sprint relay, and our team for that is Ali and Scott, based on results from yesterday and today.  Hopefully the rain lets up so that the spectating isn't too miserable! 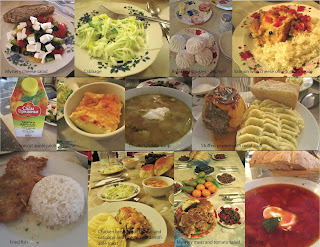 Here's a sample of some of the food we've been getting. 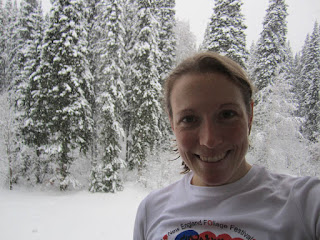 Look at all this snow on sprint morning!  Though it might make it hard to ski through, snow always makes me happy. 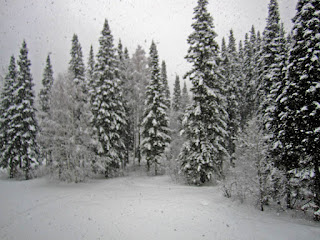 Balcony view - usually there's a mountain behind those trees. 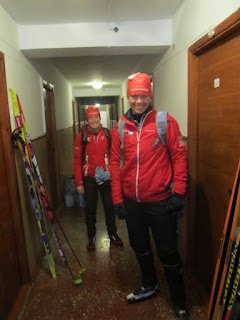 Anna and I in the hallway. 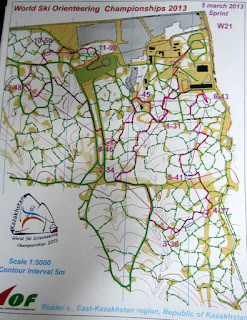 Sprint map, with my course in pink.