As part of the U.S. Orienteering Team, I submit an annual training plan with some goals in it.  Most of those goals are about orienteering, but there are some fitness ones, too, like 3000m time trials.  Generally a painful distance, I decided last year that I was done with doing these things alone - it's just too much of a mental struggle.  But when Anna suggested doing a TT after the Champs, I figured it wouldn't be too bad to join her.  Plus, my training plan says I should do one of these.  Bah. 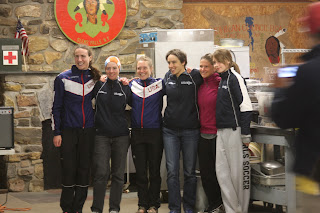 Yay women's team!  Missing Sam and Alison Campbell.  It's going to be difficult having two Ali C's on the team...

Anyway, I may not have been too excited, but I went through my pre-race prep and tried to brainwash myself into being a badass.  It was a nice day, low 70s and sunny when we started, which is a bit warm, but made for the first shirtless running of the year, which feels awesome.  Brendan, Anna, Ian and I stood on the start line and got ready for the pain, and about two laps in, SGB and Presto showed up.  Oops.  They decided to just pace me, and that was nice to watch Presto bounding along, took my mind off the pain.  There was much pain, and I started too fast, and didn't have much in the tank to finish, but managed to do it in 11:40.  Not a PR, and not the 11:20 I'm shooting for by the end of the summer, but not terrible.  I'll take it, and hopefully my next race is on the trails or in the woods!
Posted by Alex at 6:24 PM