Breakheart adventure-o and another 3k 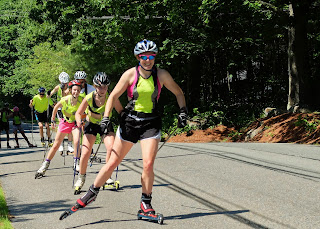 I went rollerskiing last weekend. The whole way around Littleton! This was probably the latest I've waited to start rollerskiing in a few years - usually I get out at least once or twice during May.  Unfortunately, the elbow is still not super happy after last season's abuse, so I figure, why push it.  But, a nice hot day at Littleton is hard to resist, and I didn't have anything else on my plate for the weekend.  I actually enjoyed myself!  And the elbow was fine, though I certainly didn't use my arms much. 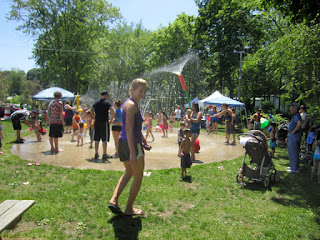 After, Olga and I were hoping to go strawberry picking, but that didn't work out, and we found a town fair in Hudson instead.  With sprinklers!  It was time well spent, I'm glad we stopped. 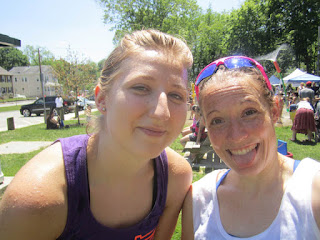 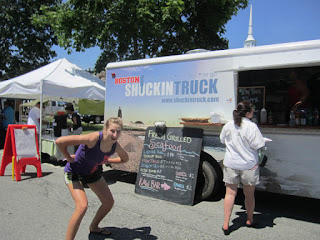 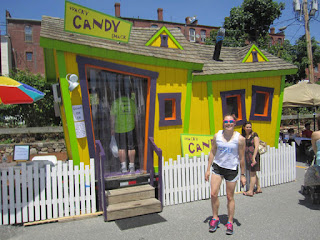 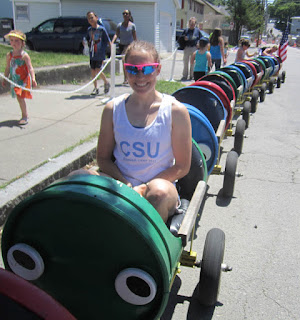 Also, I found a mini train.  I showed this photo to Ed, whose response was "don't you realize you're surrounded by 8-yo kids?"  oops.

Sunday was a US junior orienteering team fundraiser race at Breakheart Reservation, up in Saugus, so we went up there to partake in the fun.  It was hot, 90+ degrees, and sunny, but at least there was a breeze, so if you sat in the shade, life was bearable.  Running was tough, but at least it was in the forest.  The format of the race was a score-o, meaning you could get the controls in any order you wanted, and different controls were worth different amounts of points.  I decided that it would totally be possible to get all the controls, even though it was hot, and planned a route that involved all three water stops, also planning to walk up all the uphills.  I ended up being one of two people who cleared the course, and I only did it with 10min to spare, but, importantly, I was the faster of the two people to clear the course =).  Winner!  But not much competition today. 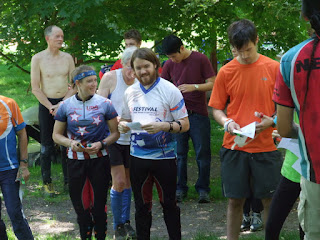 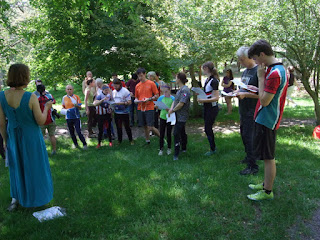 Standing at the start, we got a short amount of time to plan a route. "ooh, Ed, we should go this way!" "we? you're doing this on your own if you want to get all the controls!"

The heat wave broke on Monday, thankfully, as Tuesday was the first 3000m time trial for CSU.  I figured I'd join them, and see if I could improve on the last 3k that I'd run three weeks ago.  My goal for the year is 11:20, so after my 11:40 three weeks ago, I have some seconds to shave.   There was a good crowd of skiers, and I determined not to start too fast.  Changing into a lighter pair of shoes (an old pair of X-Talon212s, from Inov-8), I did some strides and realized I had wings on my feet today.  What a feeling!  Those days are few and far between, and I was pumped to be doing a race effort on a good day.  I managed to keep the start under control, and let some skiers drift away from me, holding a steady pace around 91s laps.  I rolled through the mile in 6:03, feeling quite good (maybe I should race a mile one of these days, see how it goes), and at 2k I had picked off two of my skiers, with a speedy J2 still ahead.  Things were starting to hurt with 800 to go, and I focused on my technique, trying to hold it together, pick up the pace, and eventually I crossed the line in 11:19, a huge new PR for me, and accomplishing my time goal for this race for this year!  Woo!
Posted by Alex at 1:33 PM

If you're looking for a mile to race, check out the Adrian Martinez Classic: www.martinezclassic.com.

Its an open mile at the track in Concord - a great fundraiser for the CCHS Scholarship Fund.

I've done that one in the past. Nice event, unfortunately, this year it conflicts with the World O' Championships. So, I'll be in Finland.