Last weekend was the two-day classic championships in orienteering, up at Bear Brook State Park in NH.  There are too many US Champs in orienteering, mostly because we can't agree to do what the rest of the world does and use a sprint, middle, and long distance event as the championship event.  The classic distance is what tends to get used at local meets, and I can admit there is something to having a combined time event, but it just seems silly to have so many different championships, and definitely weakens the statement that you're a national champion.  After all, I'm the national champion in the ultra-long event, and was on the winning team at the relay champs!  But how can you choose the best if there are so many random events? Agreement is difficult, and nobody has bothered to think that maybe the organizer should choose the format of the race for national championships.

Anyway, ranting about too many championships aside, last weekend was fantastic.  New England is having a spectacular fall, hanging out in this beautiful Indian summer thing far longer than we deserve.  Up North Orienteers put on a very nice event, on a new map that was incredibly technical.  You don't get this level of difficulty very often; I certainly don't feel like I've been this navigationally challenged since the craziness of 2011 WOC in France!  Awesome! 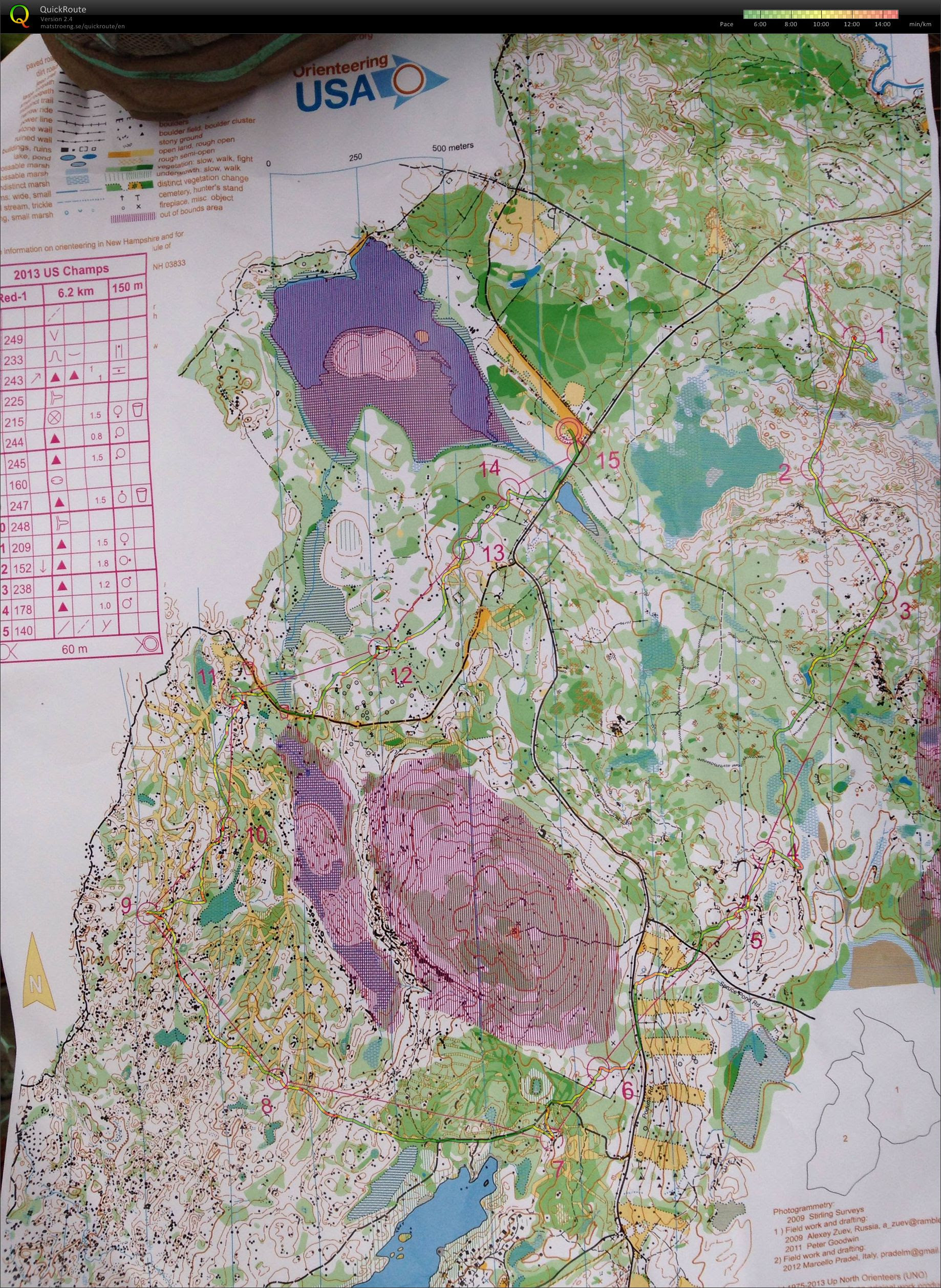 Map from day 1, with route.

Ali had elected to run against the elite men this weekend, since that's the clear next step for her to actually improve (what can you learn when you win every split?), so that left the championships wide open.  It was a small but deep field for the elite women, and I knew I'd need to be on my toes.  I am confident in my fitness and speed, but some of these ladies are ace navigators, and I'm not quite there yet.   In this thick forest with difficult navigation, speed actually becomes a liability.  I also wanted to place well among the middle-aged men who were running our course, since they're often a good measure of how consistent you're actually being.

I had some really good process goals for the race, that would hopefully keep me focused the whole way through.  After the Canadian champs a week ago, I'd figured out a couple strategies that would work to address some of the mistakes I'd made, and I was excited to try them in a race.  Out of the gate, I was excited but kept myself reined in, focusing hard on making a good attackpoint and keeping good direction.  Unfortunately, I got dragged further downhill than I meant to, and took nearly two minutes to relocate and find the first control.  Argh, not the start I had hoped for!  In an encouraging turn of events, I managed not to freak out, and I calmly made my plan for the next control and executed it to a T.  Phew.  As the controls continued to click off, I let myself move a little faster, though that cost me another minute at #4 when I missed that the marshes were dry, and overran the control.

Moving into the southern section of the course, I was feeling confident, but that area got much more technical and I nearly lost myself on the way to 9.  I had lost contact, and thankfully I was still moving in the right direction, but it was a little touch and go for a while.  Thirty seconds lost there because of that hesitation, and then I let myself drift on the way to 10, losing another minute.  I was getting frustrated with myself, but managed to keep the focus, nailing the final controls in the vague area before the finish, much to my relief.  In the end, it was good enough to win for the women, barely a minute over Kseniya, and I was 5th among the men.  Not too shabby, even with five minutes of errors!  Splits.

The evening passed quickly among friends with a lot of laughter, and after a poor night of sleep in a campground (I'm getting too old and whiny for sleeping on the ground...), I was up early, shaking out the legs and trying to figure out what I would do differently on day 2 to avoid all the mistakes I made on day 1.  I knew that to stay ahead of Kseniya I would have to have a clean run, because she is just so solid in the technical stuff, but I determined not to think about her, and only think about how to orienteer.  The focus today would be direction!  Despite the thick forest, I would have to go the direction I wanted, and not the direction the trees pushed me!

The course was very fun, and very difficult.  The southern part of this map is incredibly flat, and covered with enough detail on the map and with enough vegetation in the terrain that it is very difficult to read the flow of the land, both on the map and in the terrain.  Tough going, and very hard to simplify the land and move quickly.  I spiked #1, which feels good, and starts the race on the right foot, but then on the way to #2, I ignored the voice in my head that told me to slow down and figure out what was going on, and I got mega lost, dropping 6 minutes and change while slowly relocating.  That's a huge mistake, and I fought the urge to sit on a rock and cry about it, even as I made another mistake on 3.  But, I am proud of myself for rallying after that, and moving carefully if slowly through the boulder fields of vagueness in the southern portion of the map, staying focused and remembering what I meant to do. 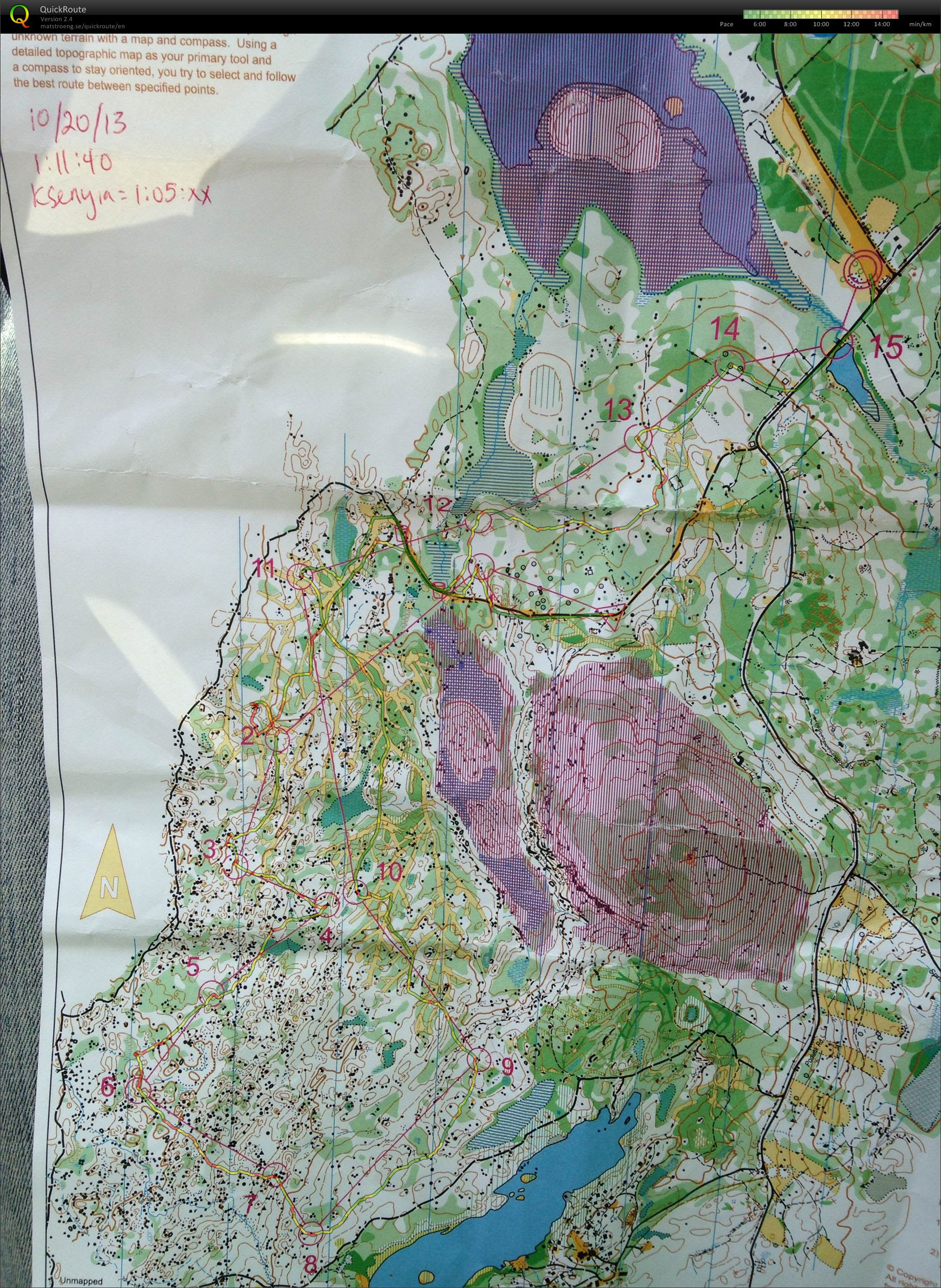 Map from day 2, with route.

Unfortunately, I was too cautious to 12, losing some time there, and then managed to completely mess up my direction on the way to 13, losing another two minutes.  At this point I was pretty angry with how I was orienteering, and I let my frustration come to the surface, bashing through the thick forest angry and screaming, but thankfully in the right direction, winning the split to 14 over all the men and by a minute over the next woman.  Where was that for the rest of the course?  Of course, it wasn't enough, and losing nine minutes over the rest of the course dropped me to third for the day behind Kseniya and Zan, and second overall.  I was bummed to not win, since I felt that I had it in me, but I did not perform well enough on day 2 to maintain the lead, and Kseniya totally deserved the title for her solid navigation.  Splits from day 2.

Now there's time for a solid training block, and the last A-meet of 2013 for me will be down near Philadelphia in mid November.  Time to retrain some skiing muscles...
Posted by Alex at 11:25 AM