I've taken a few years off from the Blue Hills Traverse, even though it's a good race that's held every year and it's relatively local.  The last one I did, in 2010, was just a really bad day for me, and left a bad taste in my mouth.  So I figured it was time to do this race again!

It was chilly this year, about 24F with tons of wind, I was hearing windchill of zero degrees. Brrr.  Once in the woods I was generally ok, though there was one hillside where the wind was cutting right through the trees and I couldn't get down into a valley soon enough.  The Traverse is a mass start race, and you're allowed to follow, so it's always fun to see what group you end up running with.  This year, the fast boys took off quickly, and I found myself slogging cross country and feeling kind of cold and slow.  It didn't help that the day before had been a monster day of orienteering, setting up and taking down a meet up in Lynn Woods, but there was just no pop in my legs.

I could see a group of guys ahead of me for the first few controls, and I knew with this much fatigue in my legs I'd have to be flawless in my navigation.  Shortly after that realization, I thought I was overrunning control 3, so turned around, making some spectacular parallel errors and losing five minutes and my pack of guys.  Damn. 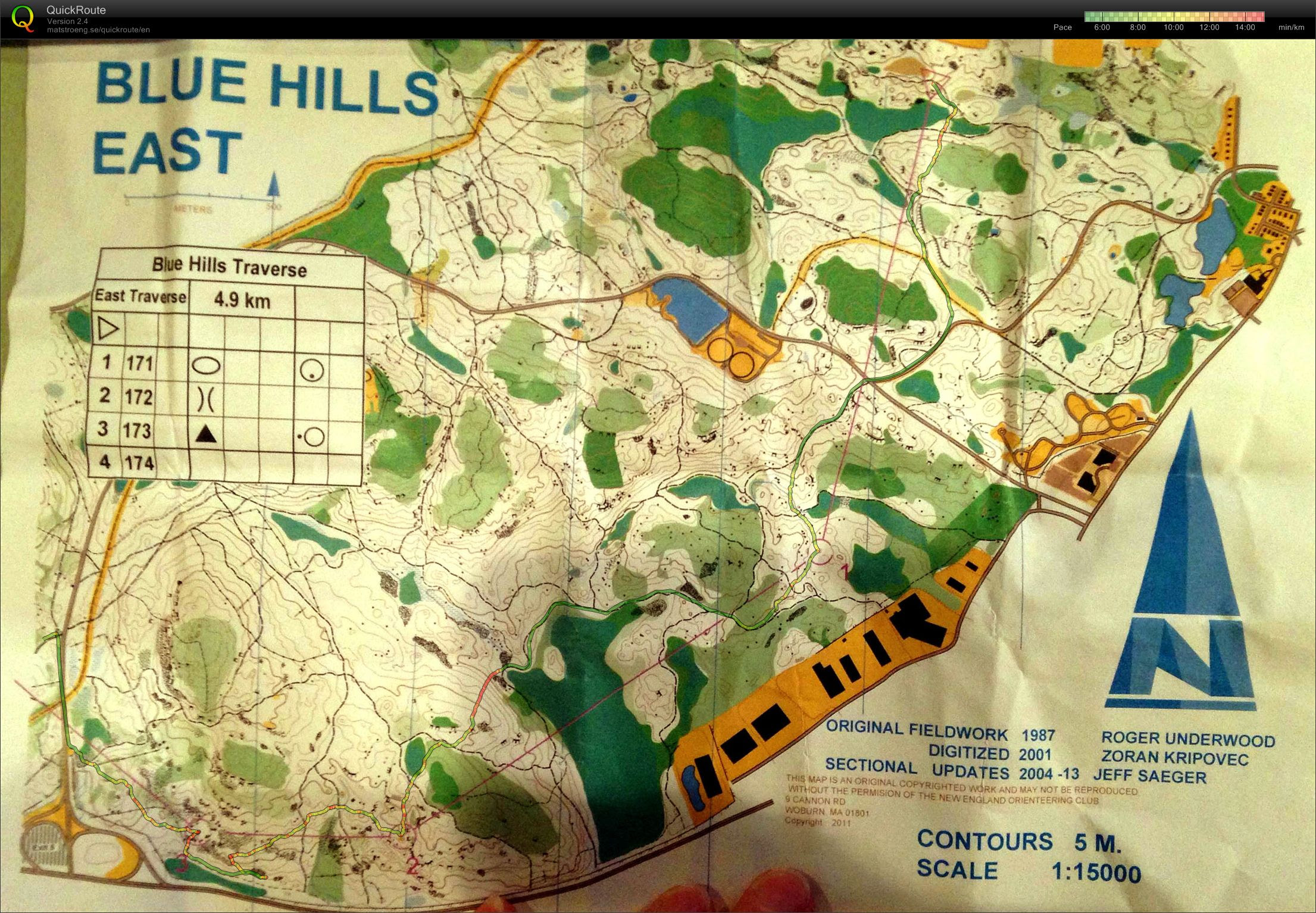 On to the second map, and I re-found most of the guys I'd been running with, Ben and Ari and Will and Jon, as they wandered around searching for a boulder on a hillside littered with unmapped boulders.  We got lucky and found the control, and I got mad, because I didn't think that was a particularly fair control location, so I started running faster down the hill. I couldn't quite drop the guys, but I did make contact with Tim and Juha, and I had some moments of good orienteering. 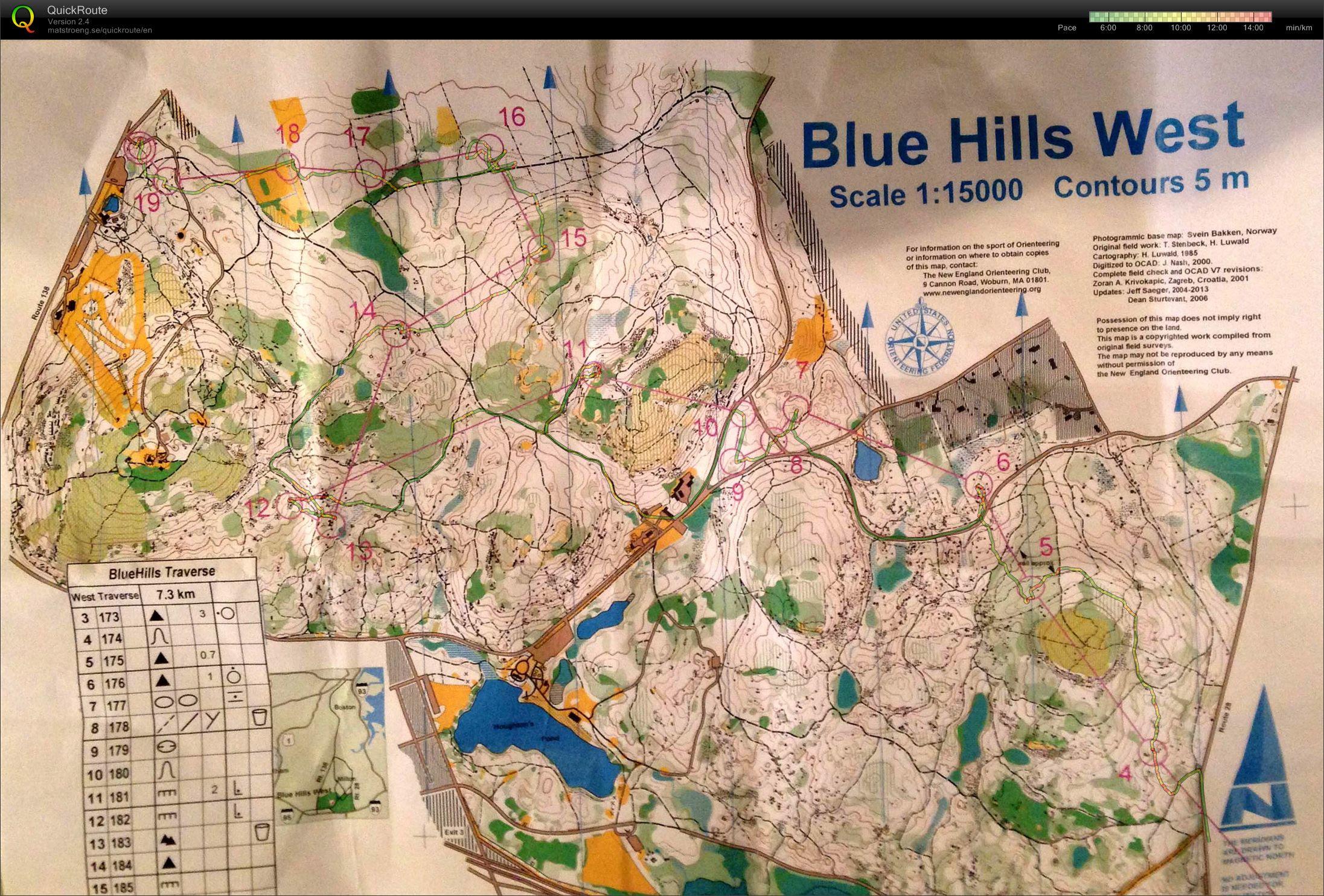 That didn't last, as I chose the wrong route to 11, losing about a minute on the route and another minute because of vaguely mapped terrain, but this got everybody, and I was near the front of the pack.  Whee!  Jon latched onto me at that point, because he'd apparently dropped his map somewhere, so was just following people in to the finish.  Not a bad solution, actually.  I pulled ahead with Ari and Jon into control 15, feeling pretty good about the race so far, and then we proceeded to be unable to find control 16.  It was a rootstock, with no solid attackpoints on a flat plain, and it turns out it was also mishung, by 50m.  So, as we wandered around, Will and Ben and Tim and Juha all caught up and passed me by, and that really broke my give-a-damn.  So when the boys still with me on the trail ran faster, I just didn't speed up, and eventually stumbled into the finish very happy to be done, and very frustrated with the parts that hadn't gone so well.  Luckily, I had my big megapoof to put on, and I won a gingerbread man, so life quickly returned to its general state of awesomeness, but I'm STILL pissed about losing five places in the last 10min of the race! 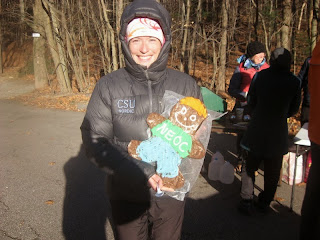