Racing! (on skis and foot)

Ski season is just about starting, with the first race this weekend up in Craftsbury, VT. I elected not to sign up for the classic race, given that my elbow is still not perfect and I don't want to mess up all the good physical therapy I've been doing for it, but I am signed up for the skate race. Skate poles are longer, and that seems to be less aggravating for the triceps tendon insertion. I can't wait to race! I don't feel ready, but this week I've been shoveling enough snow to actually get strong, or at least, sore, so we'll see if snow shoveling is at all ski specific. Hmm.

I did get in one opener race; while up in Craftsbury for Thanksgiving (wheee! skiing!!). That place is becoming like the home-away-from-home for us Boston skiers. I certainly can't complain about their delicious maple bacon and everything local, organic, and delicious in the dining hall. Oh wait, I'm there for the skiing? Anyway, the race was billed as a 10k, but was more like a 7.5k, 5 times around a 1.5k loop. It had been cold, but warmed up the night before the race, leading to some quality manmade sugar-slush on the hills. Not my favorite conditions, but it was fun to rev the engine a bit and see what would happen. What happened was a lot of wheezing and some burning legs, as well as a fourth place finish among the college skiers who were up there. If you plan to race yourself into shape, you gotta start somewhere, and admit that you're not starting at peak performance. Turns out, ski racing is mighty tough, and I could have used a bit more oomph, but I was totally ok with the result. 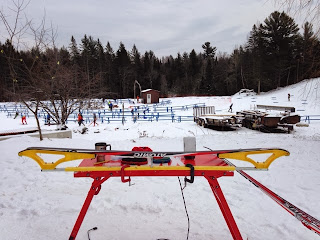 Morning view on a race day! Coffee mug on one side, wax iron on the other, and your wax table is all set.

In non-racing news, Ed's mom sent us a gingerbread house kit. Zan came over and helped us decorate, we were quite a team of sprinkle applicators. Unfortunately, Ed and I differ in our philosophies regarding gingerbread houses. To Ed, a gingerbread house is something that is supposed to sit there and decorate your counter during the holidays. Then, at the end of all the festivities, it is hard as a rock and not tasty, so it gets thrown away. To me, we're looking at a house-shaped cookie, and I want to eat the darn thing. I've limited myself to only eating one side of the roof, but Ed seems to have noticed, and is making comments like "there was more roof damage in a storm near the gingerbread house yesterday". I think he's on to me... 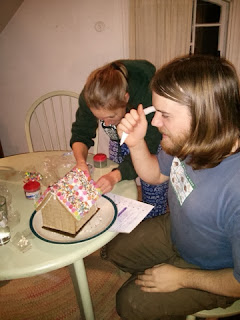 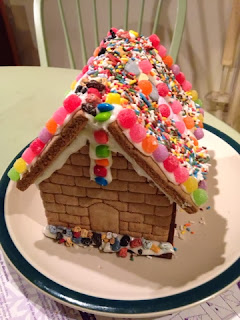 Last weekend, I stayed home rather than search out the skiing somewhere.  Weston has been blowing snow, so we had an on-snow practice with the Bill Koch league, and there was even some natural snow, but not quite enough for skating.  From BKL practice, I joined up with Terry and Pat, two of the CSU runners, and we drove up to Melrose, for the Assault on Mt. Hood.  It turns out that Mt. Hood is actually a golf course; I had expected a bit more.  But, it was a hilly race, with a fun low-key atmosphere, and snow on the ground. Not quite a trail race, but pretty fun for xc.  3.5mi, ish.

I wasn't really sure what to wear, but settled on a windblock polypro and another one on top, with two layers on my legs.  It was chilly, 13 degrees!  And then there was the guy in a speedo.  Seriously? 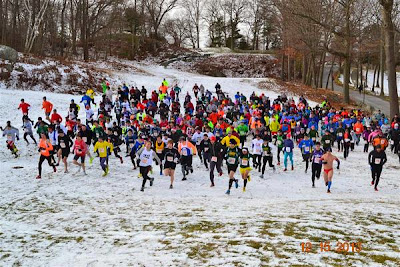 Exhibit A. Speedo on the right.

The race started out with the part that went up Mt. Hood, so I took it out slow, and then there was a really steep descent (wheeeee!), and an even steep ascent back up to Mt. Hood, which I discovered was faster to power-hike than to run.  I was already benefiting from my slower-than-usual start, reeling in the runners and starting to find my stride.  Pretty happy with my choice a shoe, the TrailRoc236, which have aggressive outsoles but a nice wide platform, lending some stability on the slippery snow.  At about two miles in, I could see mr. speedo ahead of me, and I determined that I would pass him.  This helped the motivation, and once I caught him, I had half a mile left in the race and I had to hold him off!  Success in that regard, but I ended up just off the podium, in 4th, for my age group (and 5th overall).  That meant that I didn't get a giant nutcracker award - bummer!  Next year... 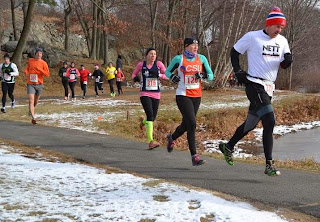 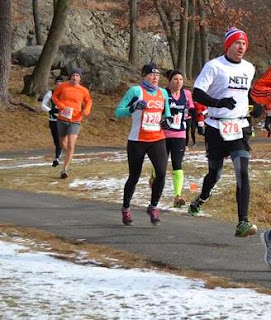 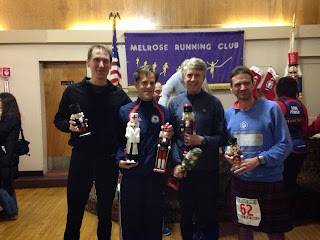 The CSU masters team took the win, and took home some nutcrackers for their effort. Go CSU!