Last weekend was the second Eastern Cup of the year, in scenic Rumford, ME.  I have fond memories of racing there in college; it's a tough course that rewards good skiing and good fitness; you can't coast by on one or the other.  And usually, the wind is blowing the right direction, so you can't smell the papermills from the ski tracks.  Yay! 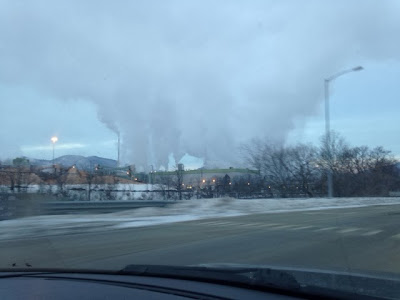 CSU showed up with our usual army of juniors, and I signed up for the mass start skate race.  I love mass starts!  Rumford had gotten hit with the same rain as everyone else, but managed to keep their snow, and it looked a lot like churned-up manmade snow, despite its natural origins.  The interesting thing was that despite the crystals acting totally transformed, skis and rills that are good on natural snow were running quite well, leading me to a stiff pair of fresh-snow skis.  I have to say, between the good Madshus skis and the CSU wax team's application, I probably had the fastest skis in the field.  Now that's how I like to ski race!

I managed to draw a 6th place seed, but looking at some of the hungry juniors in the race, I knew I'd be pleased if I could hang on to a top 10.  The fast snow would help me, but I'm still not 100% confident in my ski fitness, so the plan was to ski well over the crests of hills and stay relaxed on the long climbs.  The course unwinds in such a way that the last half is all climbing, so I didn't want to blow up too early.  Off we went, and I was happy to let some of the young guns take the lead, thrashing up the first hill with far more energy than I had at my calling.  It had been a long week, and testing wax and leading course tours and warming up perhaps a wee bit more than I'd meant to meant I didn't have the pop in my legs I'd hoped for.  Luckily, the first climb is followed by 2km of downhill, and I had no trouble making contact with the leaders after that.  As we started the gradual climb back to the stadium, punctuated with some transition-filled downhills and one long grind of a climb called highschool hill, I fell in with the chase pack, and let a small gap open ahead of me on highschool hill.  This was in keeping with my pre-race plan of not blowing up, but in retrospect, I should have pushed a bit harder there, to stay with Cate and the two MWSC skiers.  I skied the downhills well, but spent the rest of the race dangling behind that group, watching them play tactical games while I just suffered. 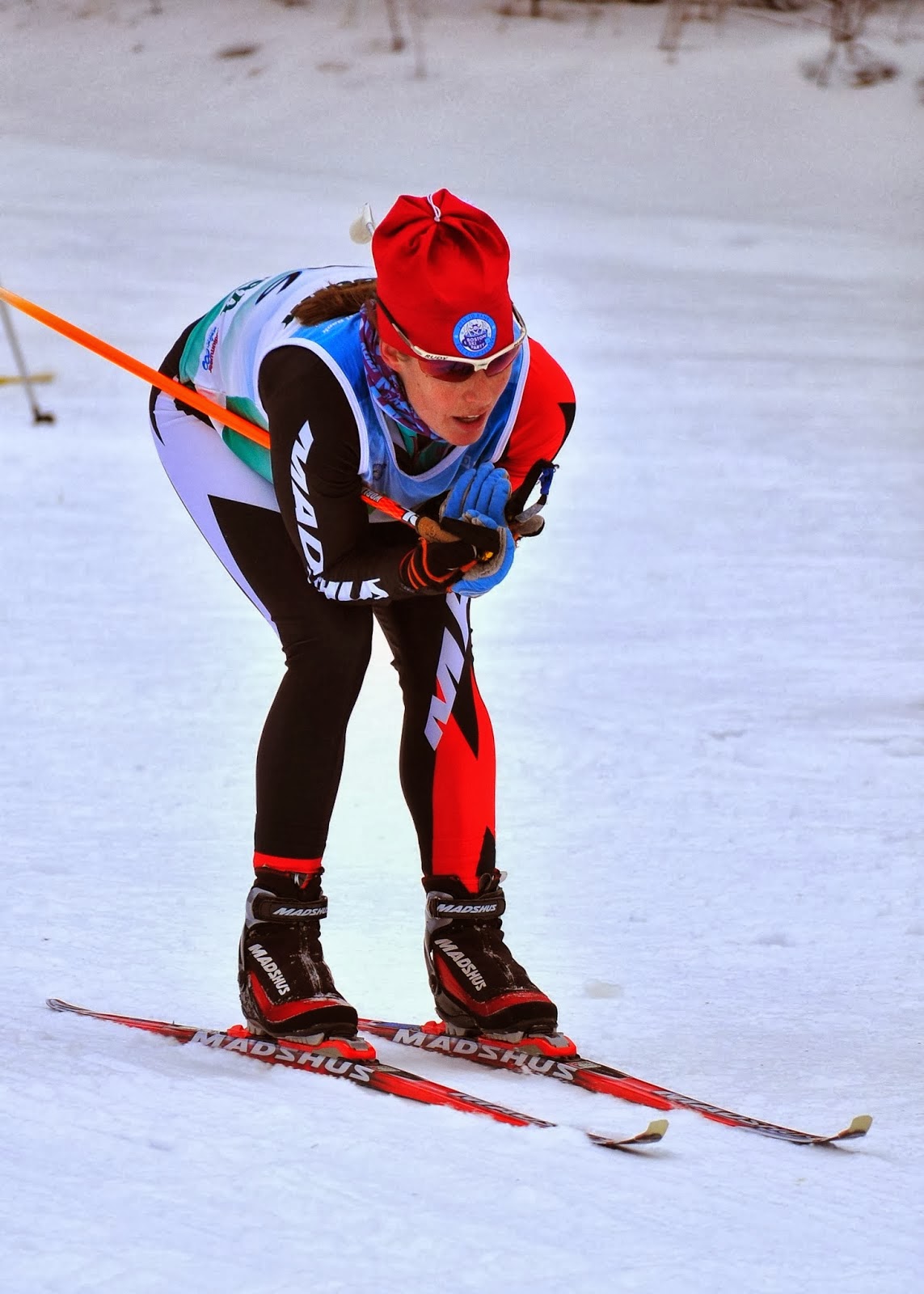 I knew I had some girls closing in on me, some of them from my own team, and I really didn't want them to catch me.  Luckily, as I approached Highschool hill the second time, I could see one of the MWSC girls had fallen off the pack, and looked like she was really suffering.  So I put my head down, remembered to use my arms and my core, and heaved my wheezing self to the top of the hill, narrowing the gap but not quite closing it.  There is some skiing left after Highschool hill, so I thought I could reel her in, but she had coaches yelling at her about how close I was getting, and I didn't make contact until it was too late, zipping under the bridge to the stadium.  Another 10m of course and I probably would have had her, but as it was she held me off by half a second, leaving me in 8th for the day, and only behind one of my skiers.  A solid race for me, but I definitely need to start doing some ski intervals if I want to feel proficient at this sport again.  Skiing is hard! And I can't always rely on having the fastest skis in the field.

I elected not to race the classic race on Sunday; in part because my elbow still hurts when I use classic poles, but also because the wax job was a bit tricky, and we needed all hands on deck to get 35 pair of skis out there in time. We had some great results (and only a couple bummer results), and hanging out with the CSU wax army is always a fun time. From there, one more day of skiing up at Jackson, where the snow was surprisingly good! I was pretty wiped, though, and nearly had to stop and take a nap halfway through my ski. Haven't been that tired in a long time. I guess ski racing is hard? And coaching is hard? Nah, gotta be something else. 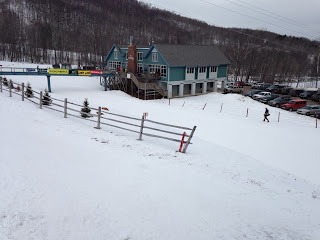 The course was in great shape, despite all the rain and ice and lack of snow. Love that spectator bridge! 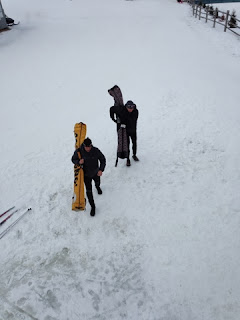 Only problem is that there's always a lot of schlepping to get to wax rooms. 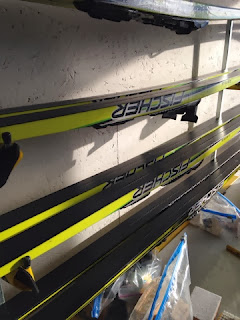 A rack of test skis. 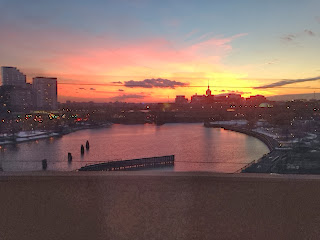 I got home to Boston as the sun was setting. It looked pretty, and made me like the city I live in. Yay!
Posted by Alex at 6:09 PM