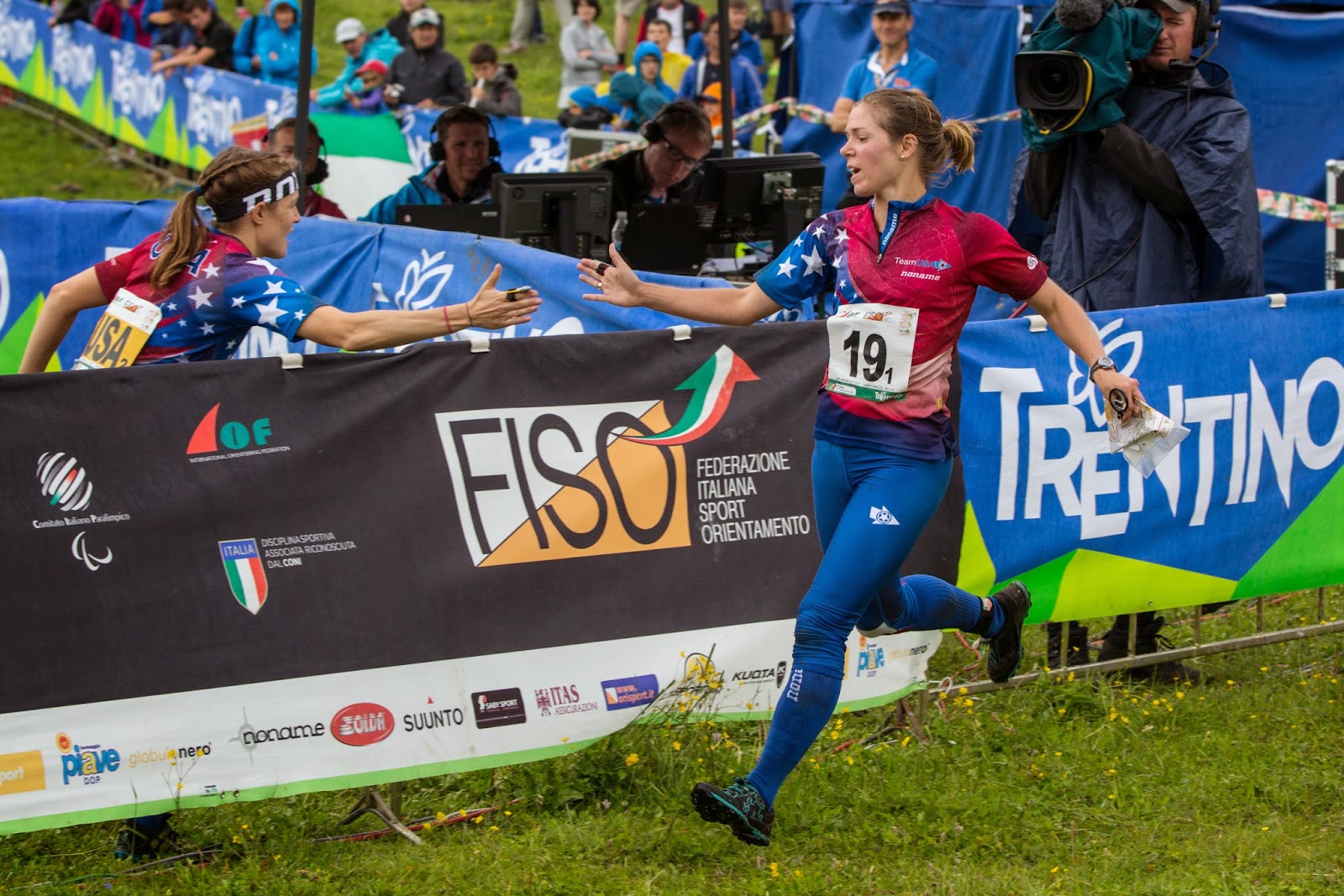 It's been three years since I ran a WOC relay. This is the highest honor I can think of, because this is the one race where the sport really becomes reliant on teams. Of course you're thinking of your teammates while running an individual race, but it takes good races from all three team members to have a good relay result, and that is what shows the depth and strength of a country's team. I was quite proud to have been selected to race for my country, but definitely a little nervous - we decided that I should run second, between Sam leading off and Ali anchoring, with the hope that Sam would have a strong opening like she has done in the big Scandinavian relays this spring, and that Ali would have good luck hunting, as she likes to do, and I wouldn't goof it up too badly in the middle. No problem.

The way an orienteering relay works is that all the teams start together, and all the runners not on the first leg are held in "quarantine", so that they cannot wander around the stadium and gather information about the race as it is going on, or watch the big screen to see snippets of GPS tracking and videos from the forest. The courses have some spreading mechanisms built in, so that you can't just have a big line of folks following each other from one control to the next; most common is to fork the legs, such that you have several common controls, and between those common controls there are three variations, similar in distance and climb, and each runner from each team will do one of those variations. But, you don't know which forking the other teams are on, so often runners go in three different directions from each common control. This works passably well, keeping the race together enough to have some really exciting head-to-head action, while spreading the runners enough that it's not just a cross country race.

So the gun went off, and Sam left the stadium in the meat of the pack, observed from quarantine. I continued with my warmup, planning to be back at the point where I could see the stadium in time to watch the leaders (and hopefully Sam) run through at the rough halfway point. I got back in time, and watched the leaders go through, and the chase pack, and the chasing chase pack, and some stragglers. But no Sam. Just before I started to freak out that she may have broken her leg, Sam came blasting down the hill and through the arena. Phew! Apparently she made a terrible mistake on the third control, and just could not find the thing, losing the entire pack, and nearly five minutes. Luckily, she had a truly fantastic second half of her race, flying back towards the front of the race like the seasoned pro that she is. 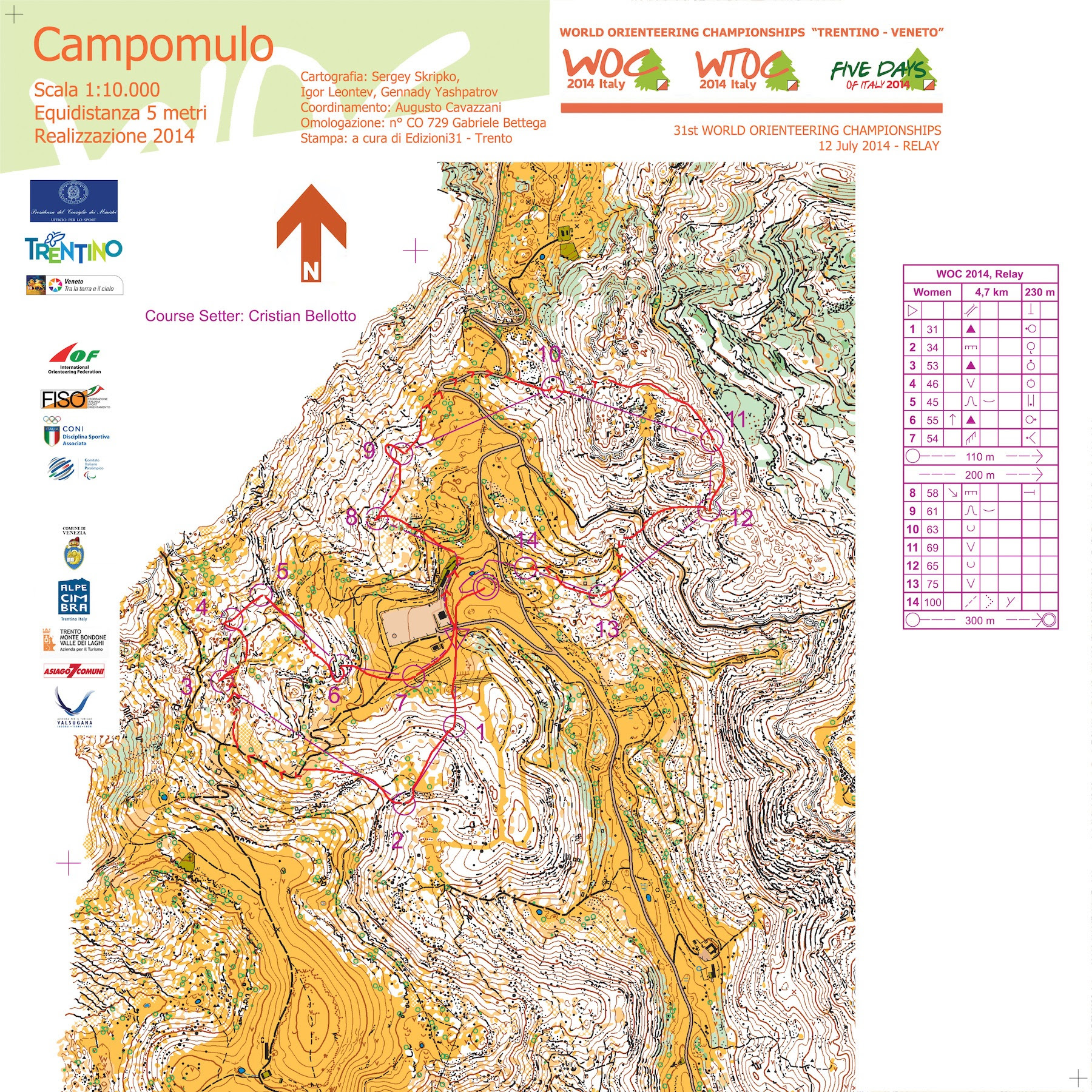 I was super psyched to see Sam as soon as I did for the change-over. You could tell she was running on fire, having closed the gap to the second chase pack and tagging me off in 18th place. Her energy transferred to me, and I left the arena with a smile on my face and fire in my gut. My plan for the race was to stay out of the red zone for the first two thirds; the key thing in relays is to find all the controls safely, not to get too flustered by the other runners. Up the hill to the first loop and I quickly felt the altitude, 5000 feet is enough to take your breath away before you notice, so I had to pull back a little to stay in the safety zone.

By the top of the hill I had caught Portugal, and Estonia had caught me. I thought maybe I could use Estonia to increase my speed and confidence, but she took off in the wrong direction and I had to verbally remind myself to trust myself. I spiked the control, and she appeared again as I was leaving it, so clearly doing my own thing had paid off. I filed that information into the front part of my brain - run your own race!

More climbing up to the third control, and now New Zealand had caught up to me, too. I could see Estonia, Poland, and Spain taking a lower route, and I knew they'd all started before me, so I was making up time. Small mistake in the circle, but then I found a little flow, really enjoying the orienteering in that area! I had some really good controls, on my own but occasionally seeing a flash of a bright uniform through the trees. I made another mistake at #6, for maybe 30 seconds, but then came in for the arena passage just behind Estonia and before Spain, in 15th place. Big climb coming up leaving the arena, and I knew I had to hang on to the focus now. Spain got ahead of me on the climb, felt like I was sucking in air from the other side of the Atlantic I was breathing so hard up that thing, and Estonia dropped me as well. Don't think about them, run your own race! The cheering up that arena passage was deafening, really cool to run through there.
I struggled a bit on the vague hillside above the arena, bobbling my controls and ultimately using some other girls to find my #9. I suspect there was a direct relationship between my wheezing and my inability to spike controls, but there was an open field run to a road coming up, so I kept the gas on and tried to keep up with France, managing to read ahead a little for the final loop. I could see Spain and Poland taking the lower route, and I was hoping that my higher route, involving some hard footing on the road, would end up faster; I gambled right. Spain and Poland arrived at the control at the same time as I did, and the three of us trailed France up the hill. Clearly Spain was a better climber, but I was able to hang on to Poland, and trusted myself to find my next forked control on my own. From there it was mostly downhill, and I double checked my route and then let gravity take over, finally feeling fast for the first time the whole race! Minor route change along the way when a herd of cows blocked my trail, but nothing I couldn't handle, and I punched the final control just behind Austria, who had caught up from behind, but ahead of Poland and Russia, which was pretty cool. 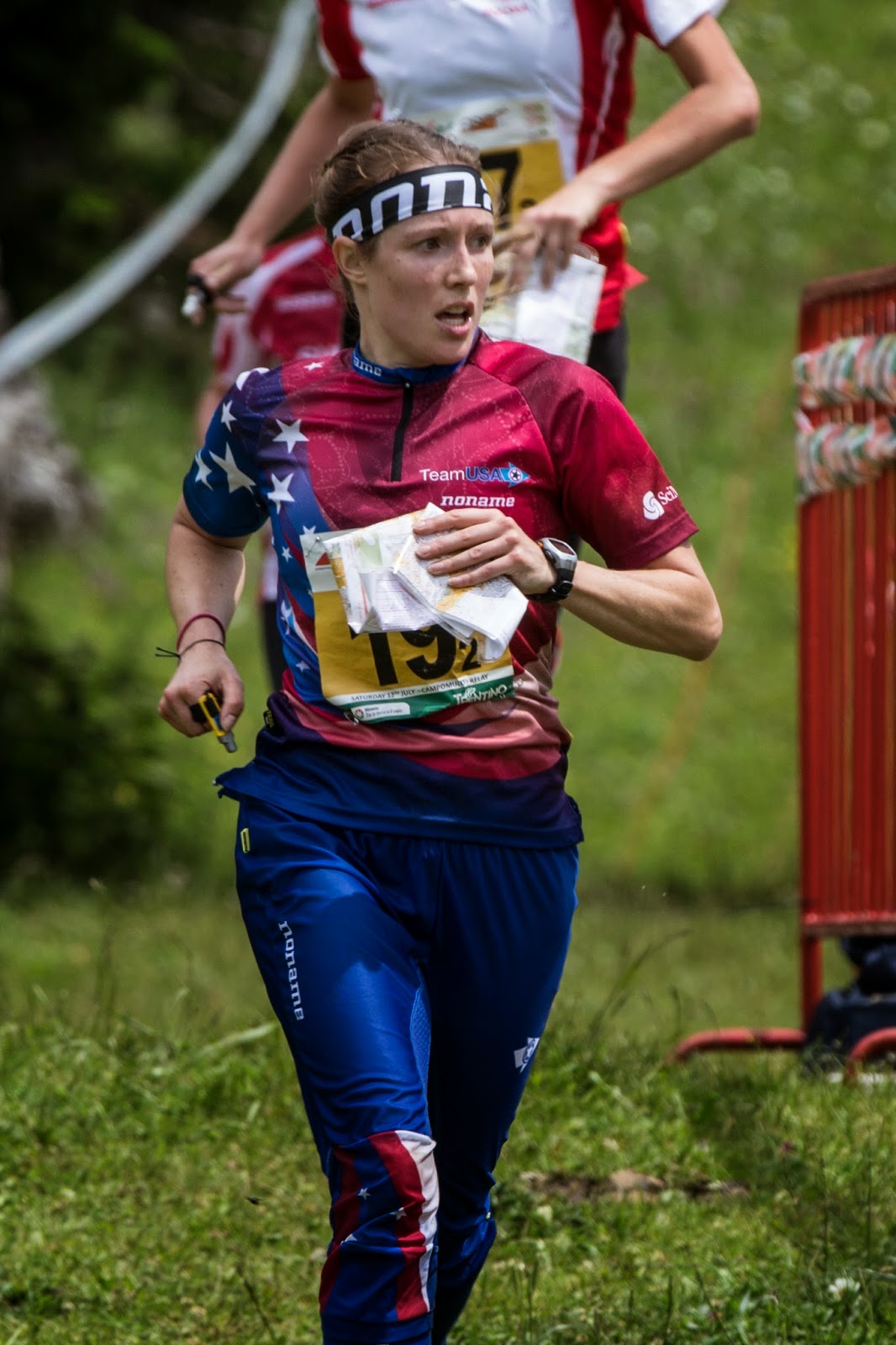 I tagged to Ali in 17th, right in the middle of that pack, and hoped she would be able to hunt down Spain and Germany, our main rivals in the country competition for start spots next year. I was proud of my run; more bobbles than I would have liked and definitely not enough oxygen, but I did my job, got all the controls, and kept us within striking distance. Ali started out strong, pulling us into 16th by the third radio control, and catching both Spain and Germany. Keeping up with the world champions who were anchoring Russia and Austria proved difficult, but there were others to catch, like New Zealand and Canada. Unfortunately, on the penultimate control she made a mistake, and couldn't immediately relocate, and Germany and Australia snuck by. Still finishing strong, our final place was 17th, which is a totally acceptable, totally average result. We had had higher expectations, but orienteering is hard, and mistakes happen. I think it says really good things about the strength of our women's team right now that an average result is on par with our best results from the past. In the end, the relay was a win on three fronts: We beat Canada, we didn't mispunch, and we earned enough country points to retain our two start spots for next year's forest races! 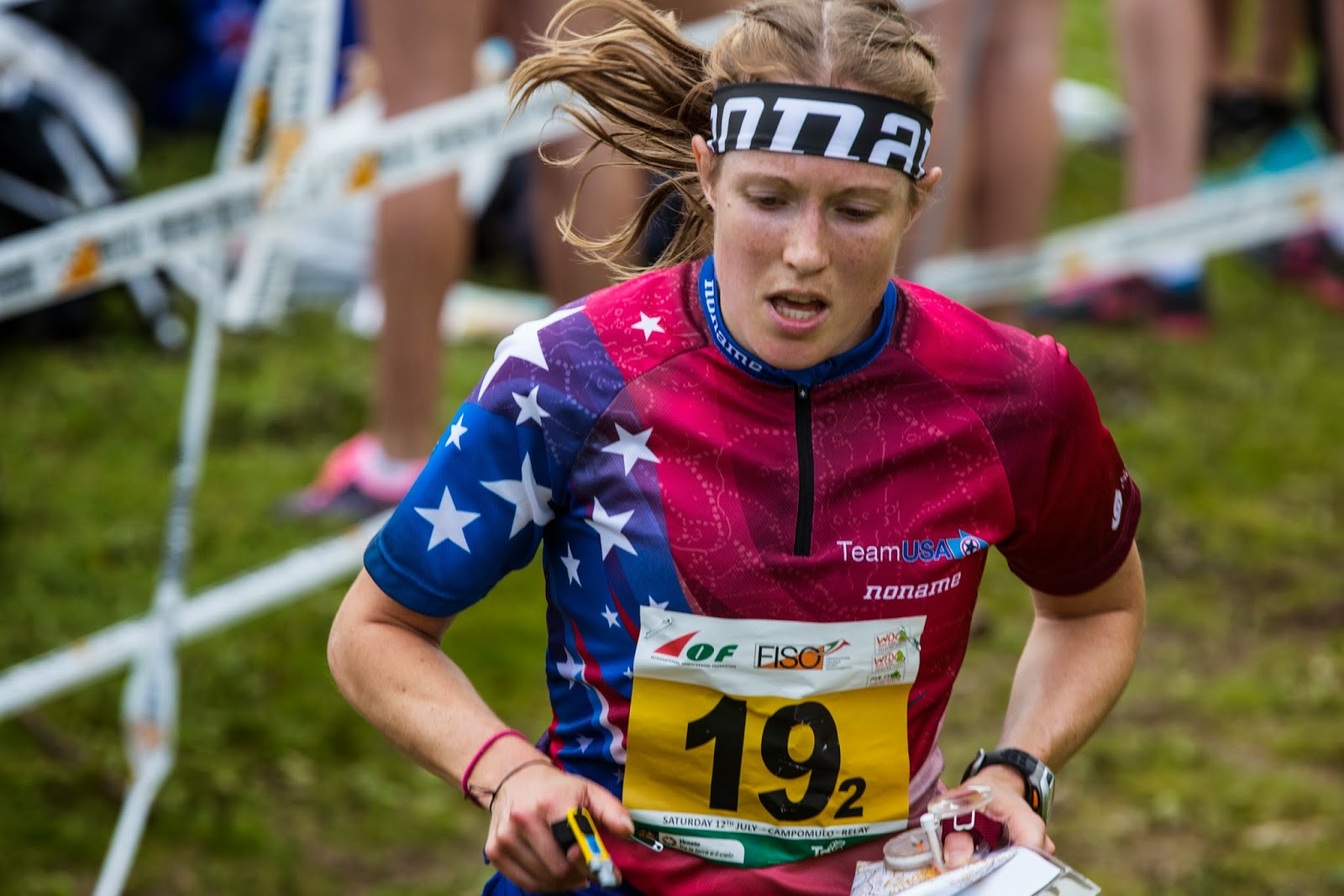 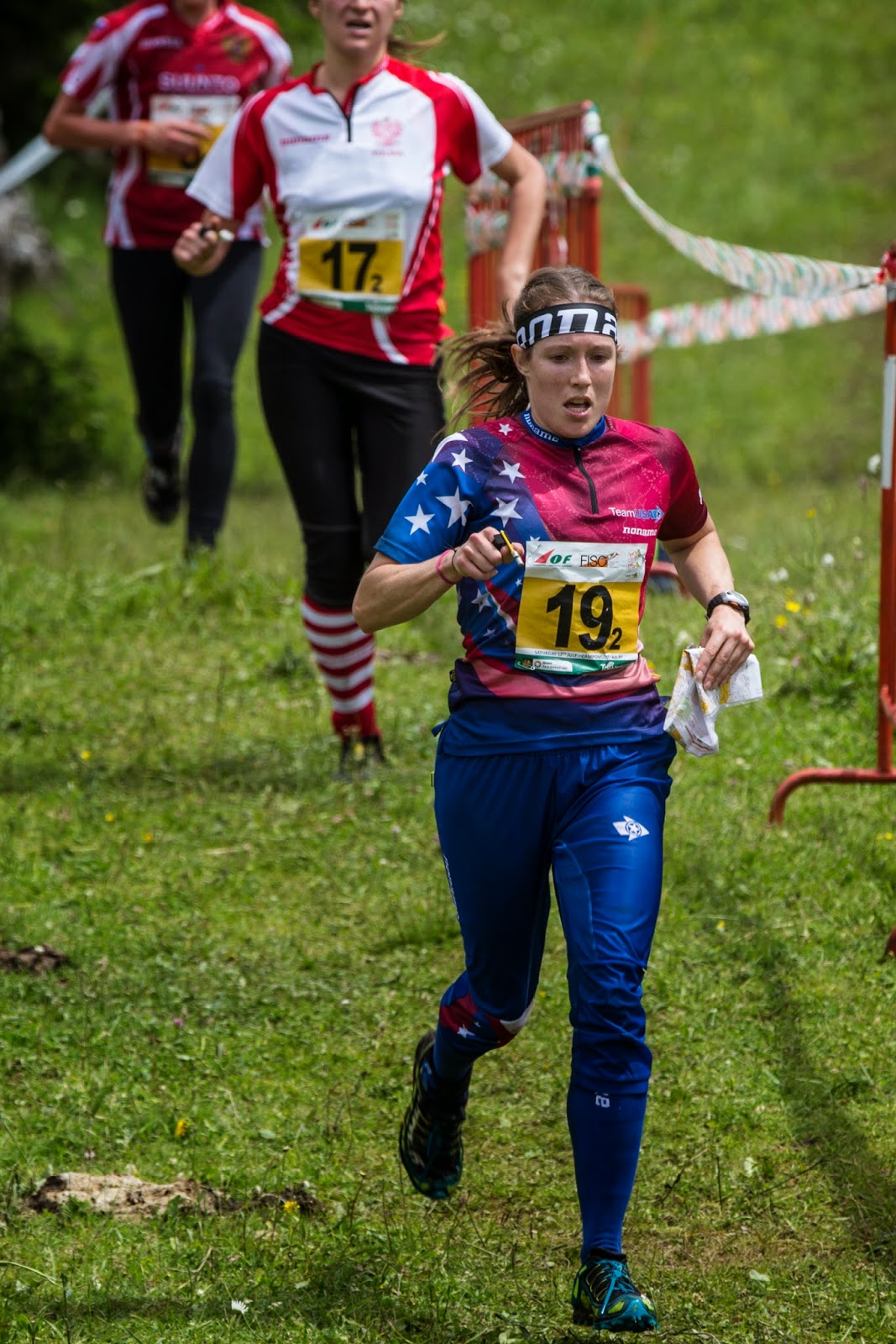 Leading Poland and Russia in to the finish.  Very pleased that they stayed behind me.