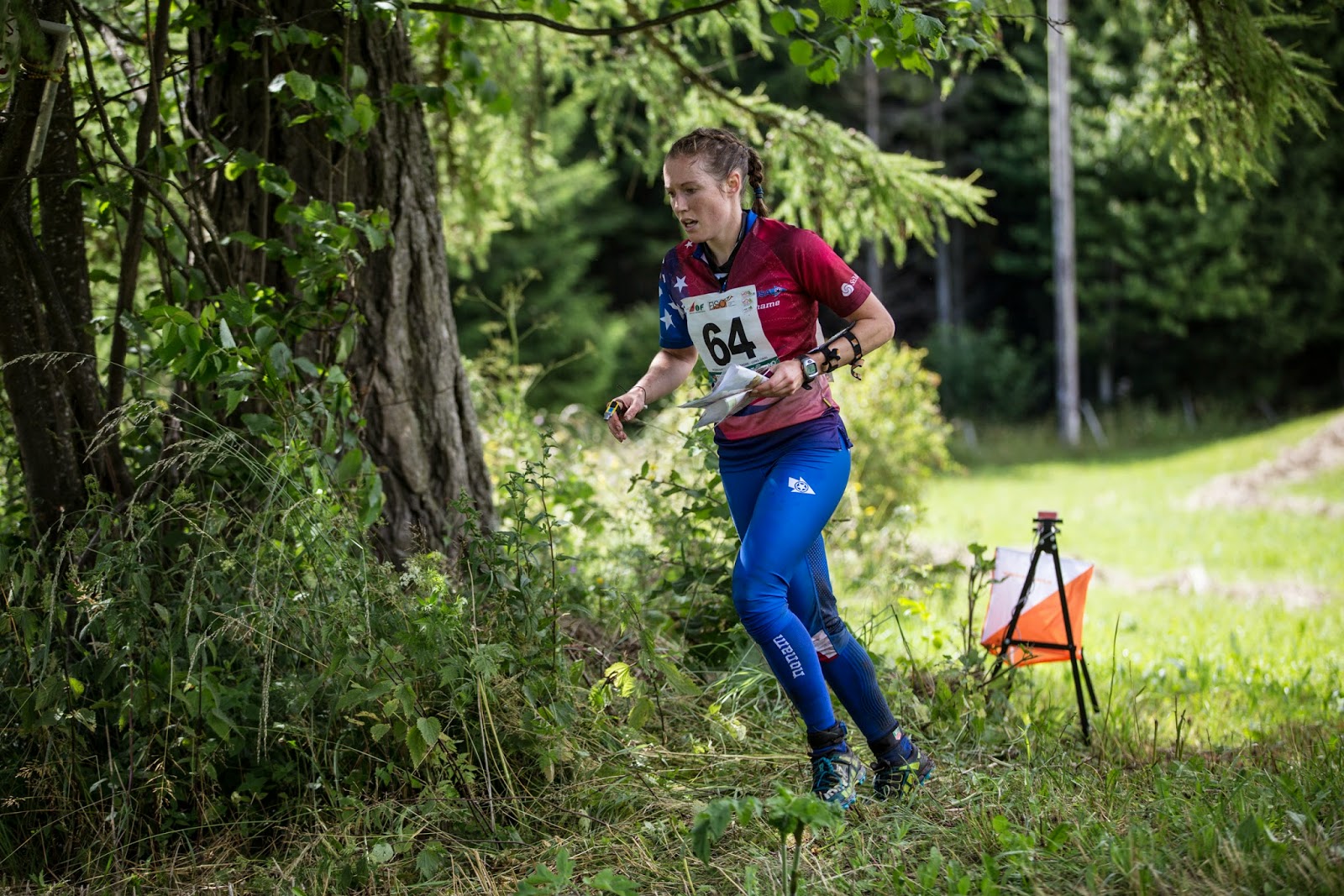 I ran in the Long Distance final of the World Championships on Wednesday.  It was a solid race, but nothing spectacular.  Of course, sometimes when you're trying too hard for spectacular, you end up with catastrophic, so I was totally satisfied with my result.  It's a good sign when your average days yield a top 60 in the world!  I struggled with the altitude much more than I expected, really huffing and puffing on the uphills, of which there were many.  I love long races, but I was suffering pretty much from the start on Wednesday, and I was quite ready for the finish when I got there!

I felt calm going in to this race; the terrain feels like New England, with hills and rocks and things, and I had done my homework ahead of time learning the map.  It was a long run up to the start, and I was barely making the call-up lines in time; definitely still breathing heavily as the beeper counted down and I took my map. That was the theme for the day - very hard to get enough oxygen in my lungs.

GPS tracking, and the static map is below (apologies for the image quality...) 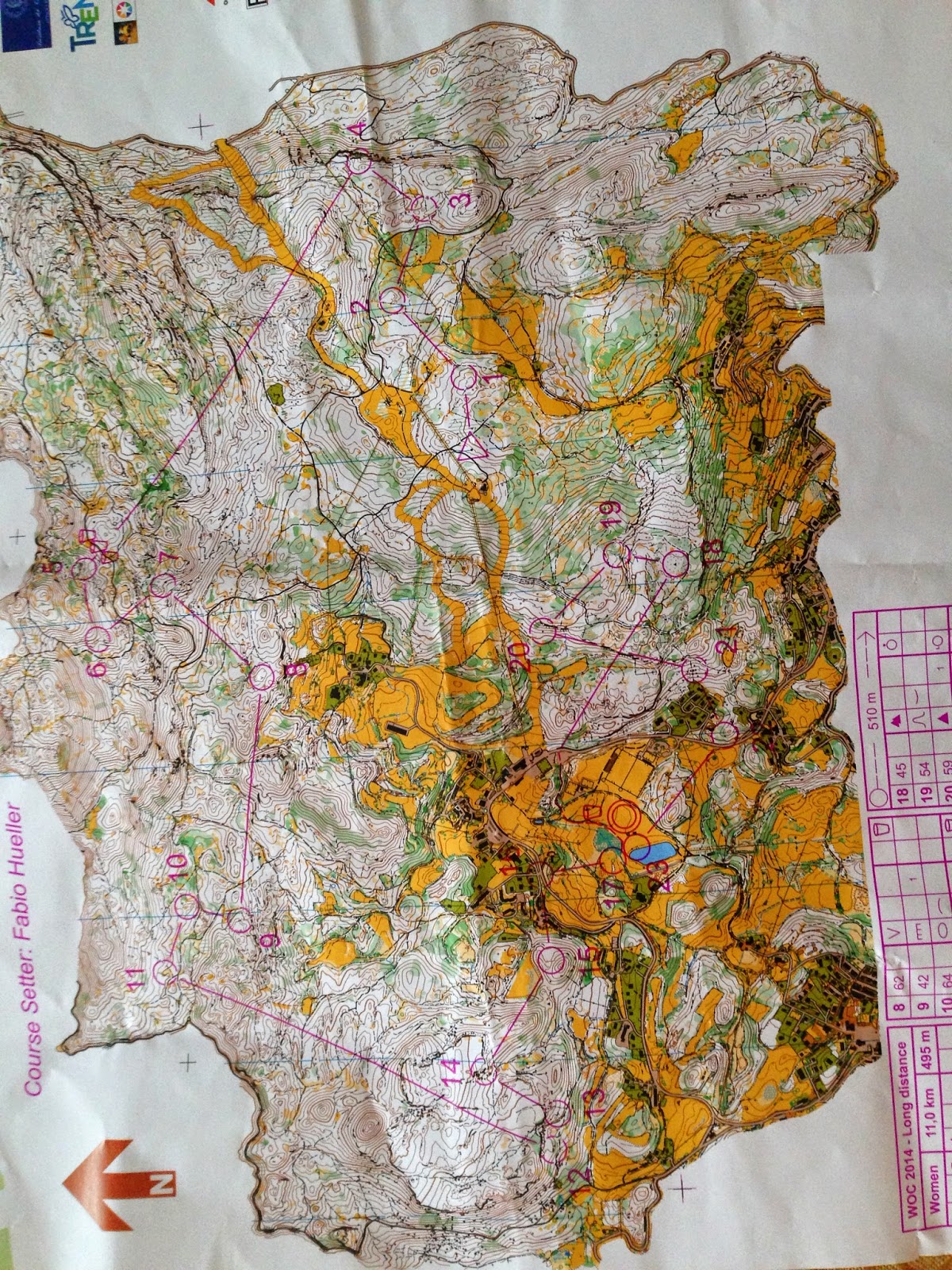 The race started off well, as I spiked the first two controls, not moving super fast yet but not stressing about that, just chilling and making sure I fell into a groove for the navigation. I probably should have gone straighter to 3, and I lost contact and confidence right at the end, for nearly a minute mistake. Then there was the first long leg to 5, where I think I chose the right route, but I discovered that I didn't have the climbing legs I had hoped for, and was just crawling up the hill at the end.  This was compounded with another mistake in the circle, as I started hunting for the control a few contours too low.  More time lost, probably 45 seconds just like that. 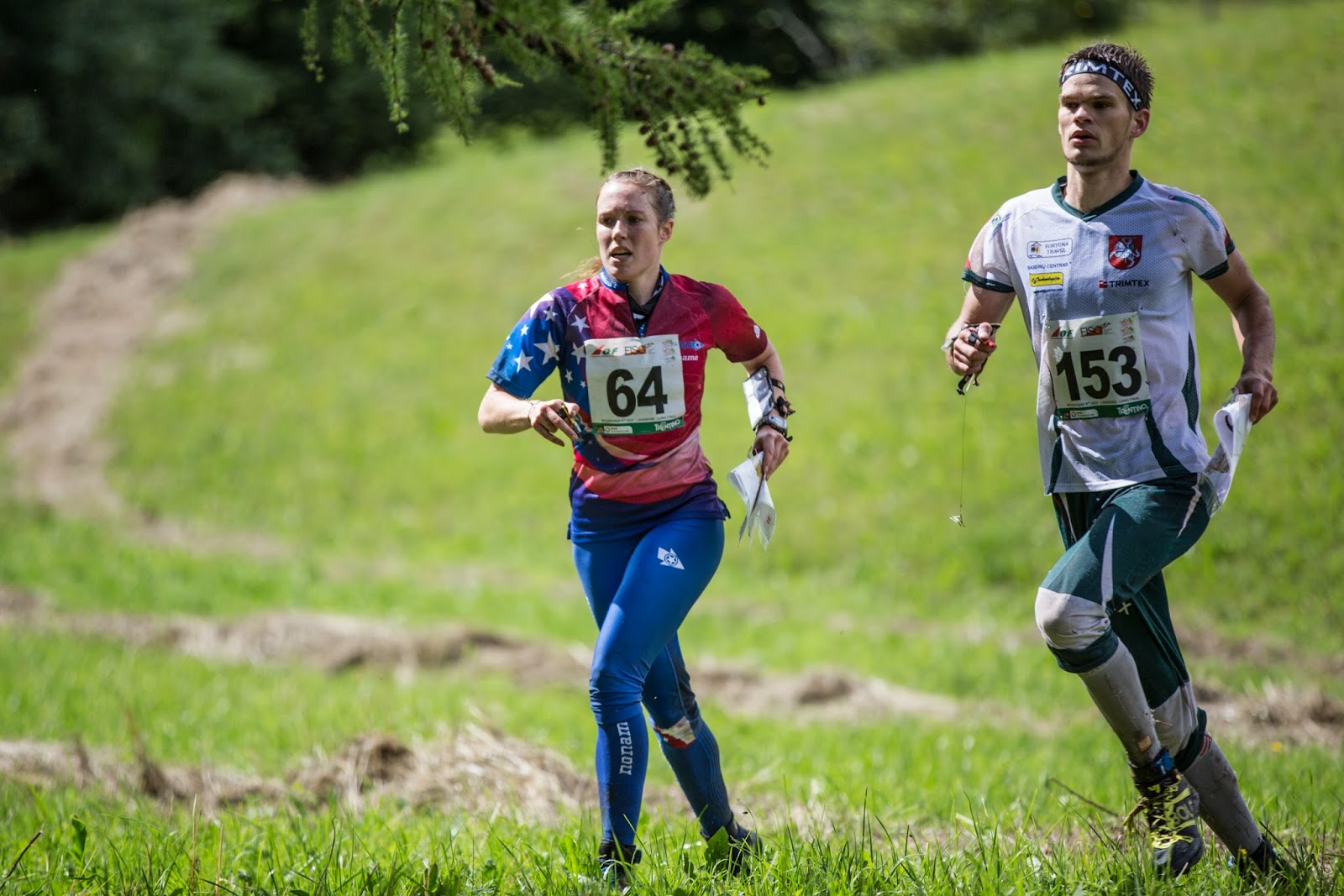 Racing against a Latvian dude to get to a control first. Let's pretend I got there first. (we're on different courses, but men and women are out in the forest at the same time).

We had some short fun legs after that, then a couple slightly longer legs, which I really enjoyed, before the second long route choice leg to 12.  I chose the right hand route, on the road, finishing it off with the small trail that descended nicely. An enjoyable leg, and I was happy to spike the control at the end of it.  I caught the Israeli woman at 14, and picked up a running buddy at 15 from Slovenia; she had started two minutes ahead of me and I had caught her.  This was encouraging to catch up to runners, but I was getting dangerously tired as I slogged through the mudpit of an arena.  The rain had stopped, and the sun was starting to feel hot! 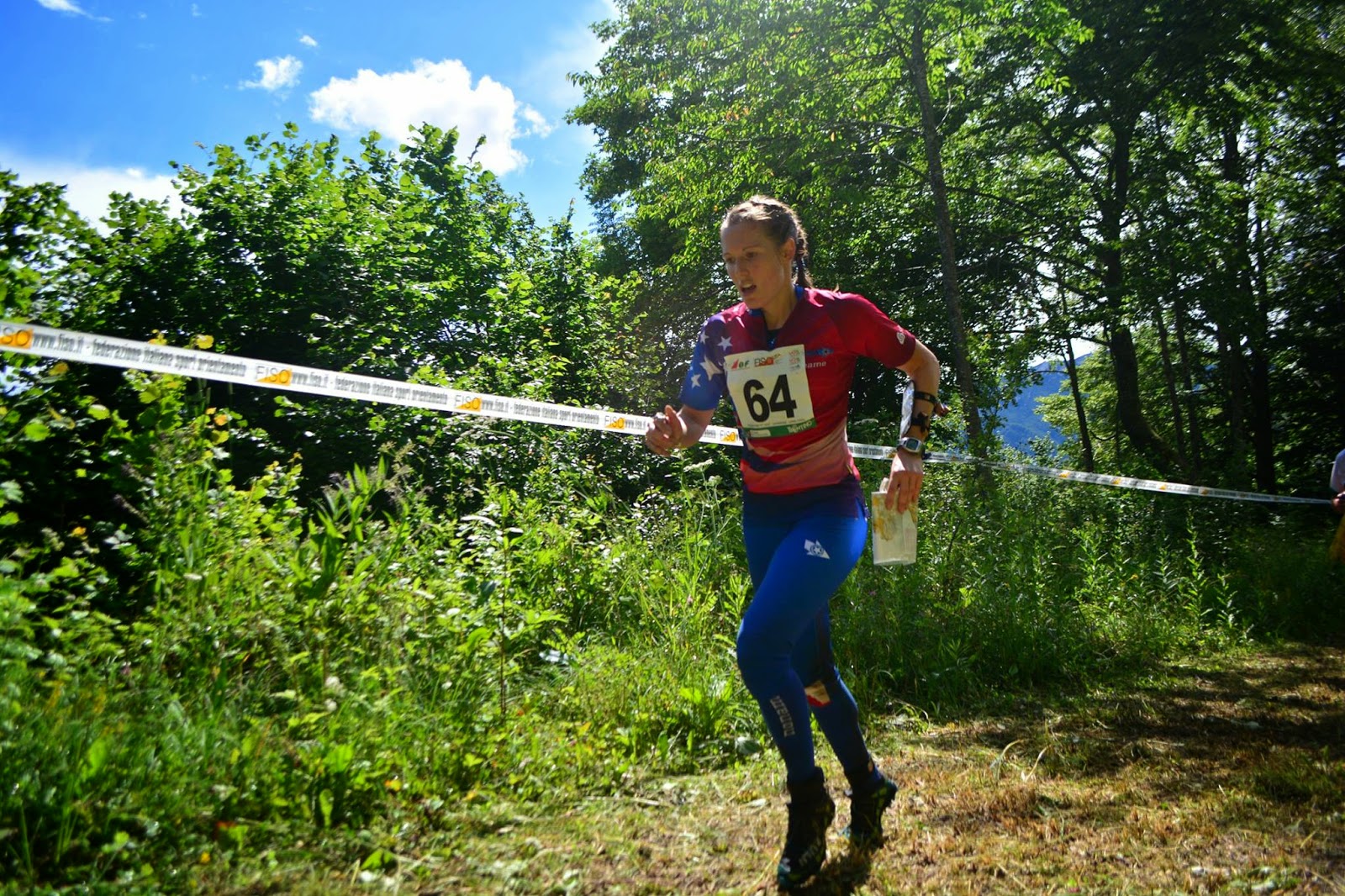 I felt like I was barely moving up the hill to 18 through the green; hindsight again points out that climbing through the ski slope would have been a better choice. I didn't give quite enough respect to my fatigue after that, and did some headless chickening around 19, that was probably due to oxygen debt. So frustrating! You work so hard for those minutes, it's tragic to lose them just because of a lapse in your focus.  The final bit I pushed with everything I had left, which wasn't much, but apparently was enough to hold off the Chinese runner by one second, for 52nd place. Results.

So, that's a top 60, and only 33% back from the winner, a totally solid race, but so close to that top 50. I am satisfied. I did what I could with what I had on the day. It was a super fun course, and truly lovely terrain. And, how can you argue with the Lego movie themesong I had in my head all day … 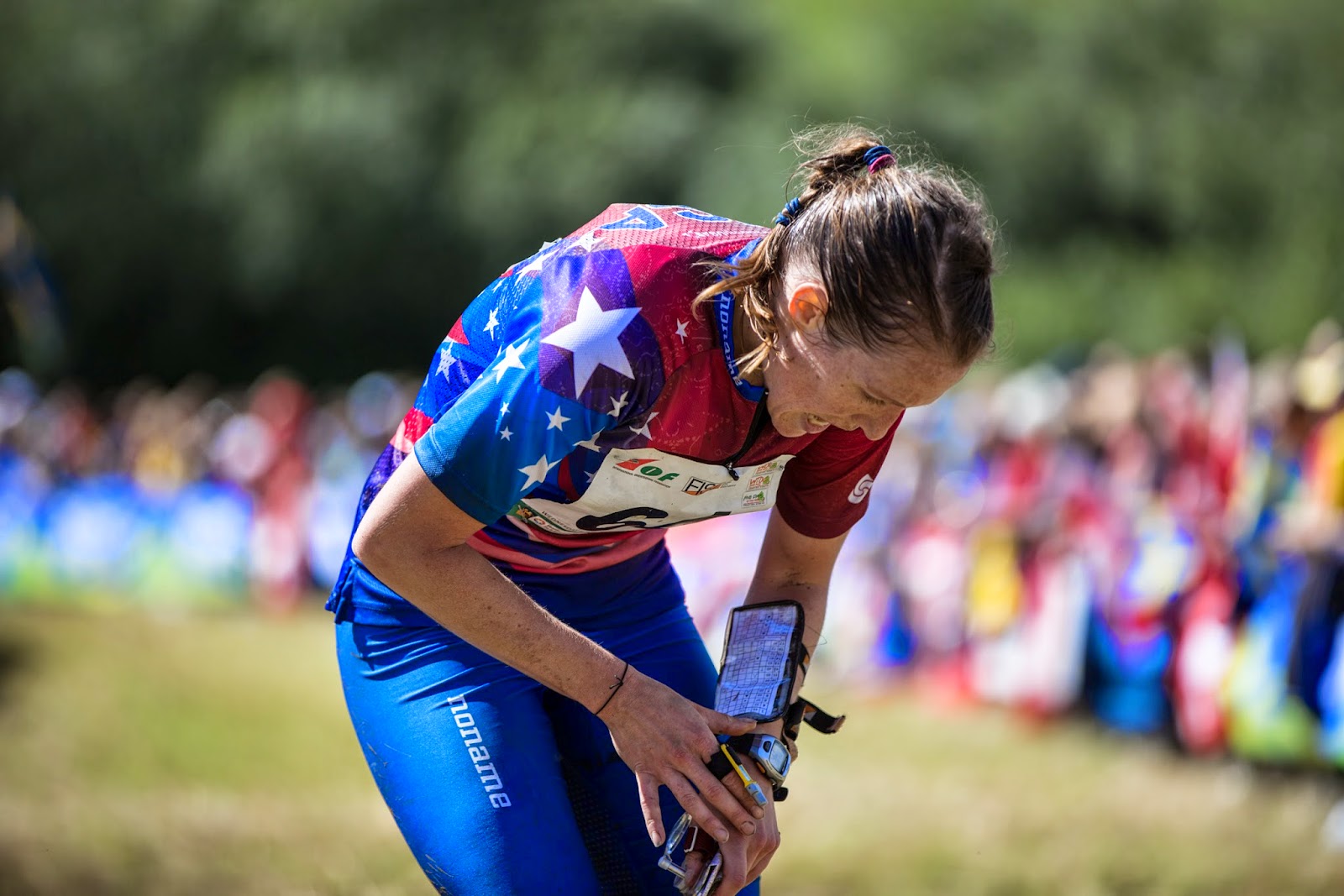 (but, hard races still hurt, even when everything is awesome).

Here are some bonus photos (thanks to Ken Walker and Ethan Childs for the racing photos!): 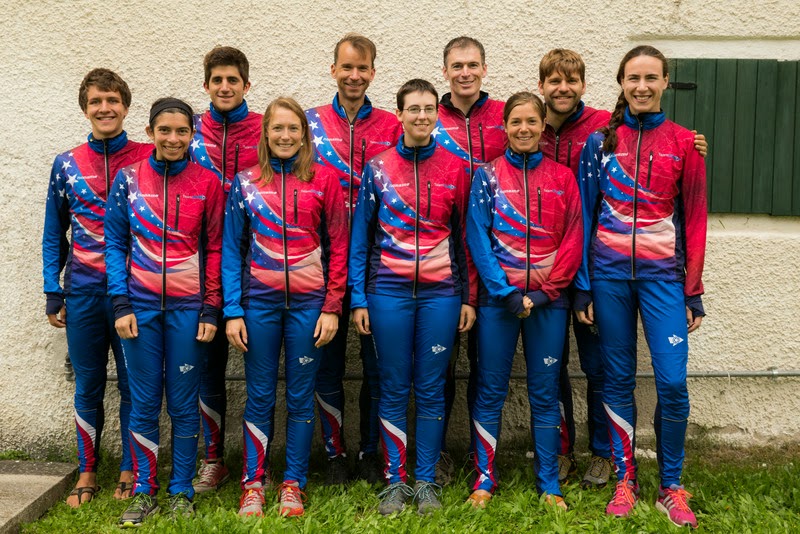 Team US all dressed up.  Nice uniforms this year! 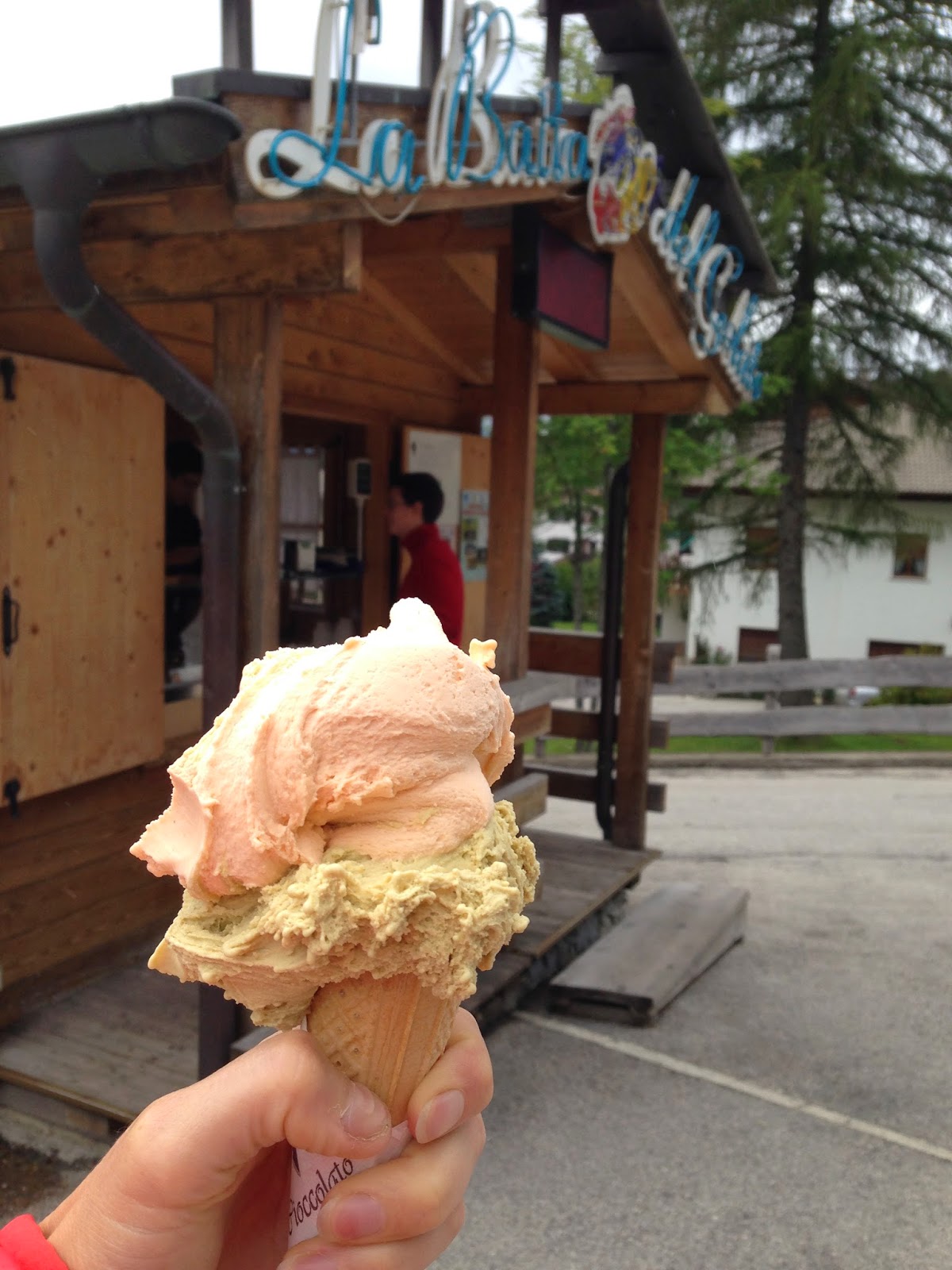 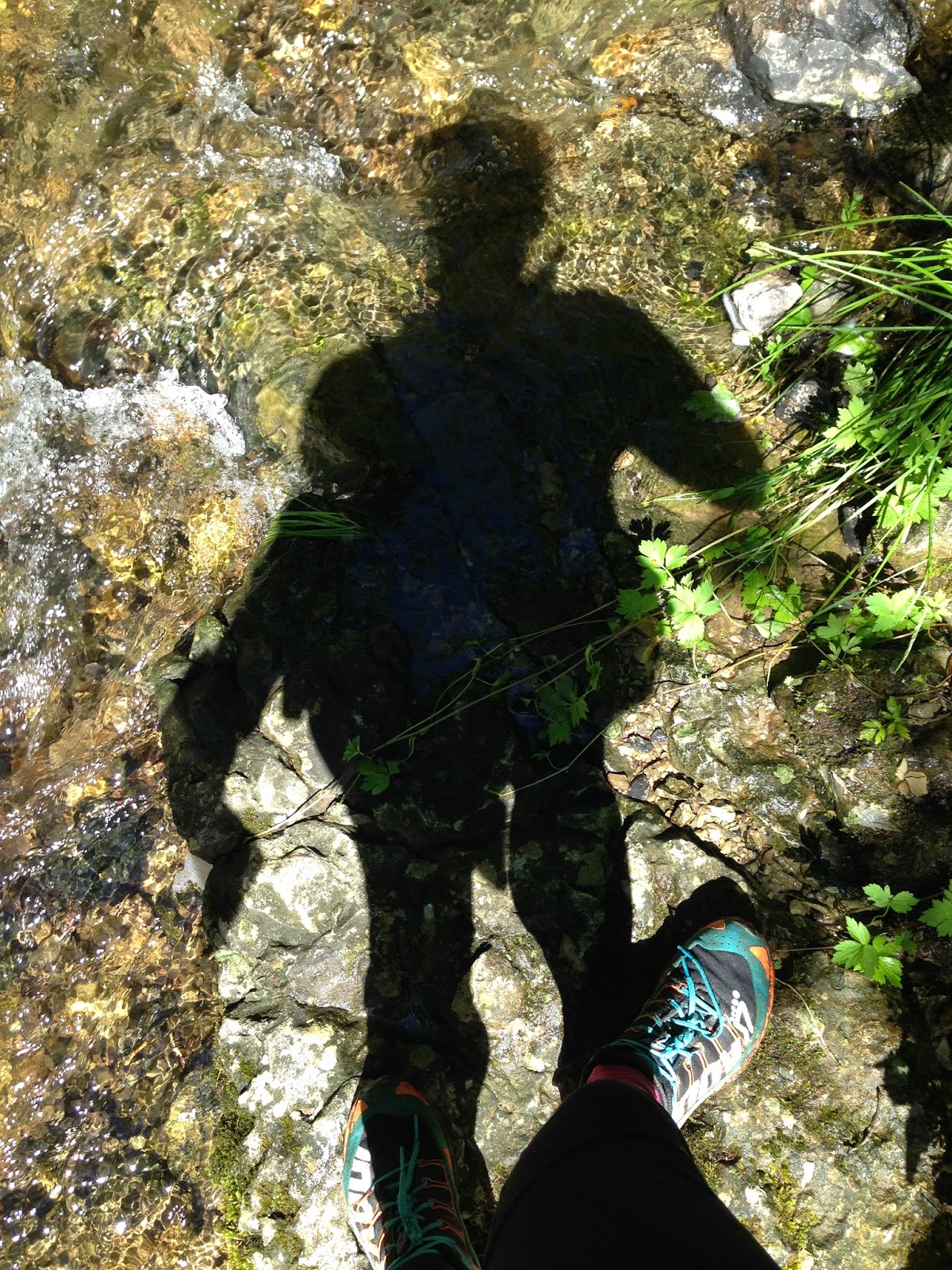 Went out for a jog the day after the long, took all sorts of silly photos. 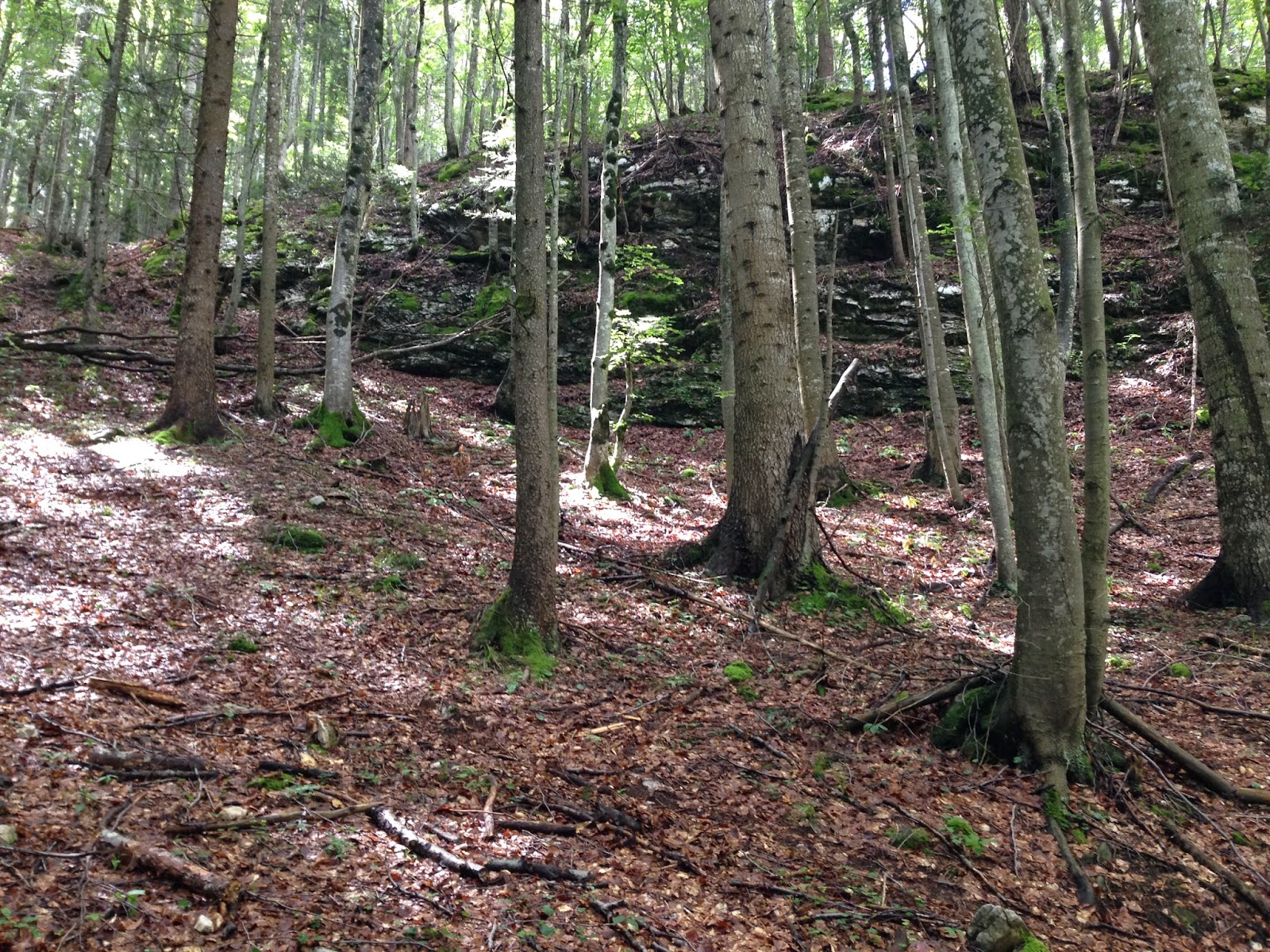 This is what the forest looks like on Lavarone map - so beautiful and open! with cliffs. 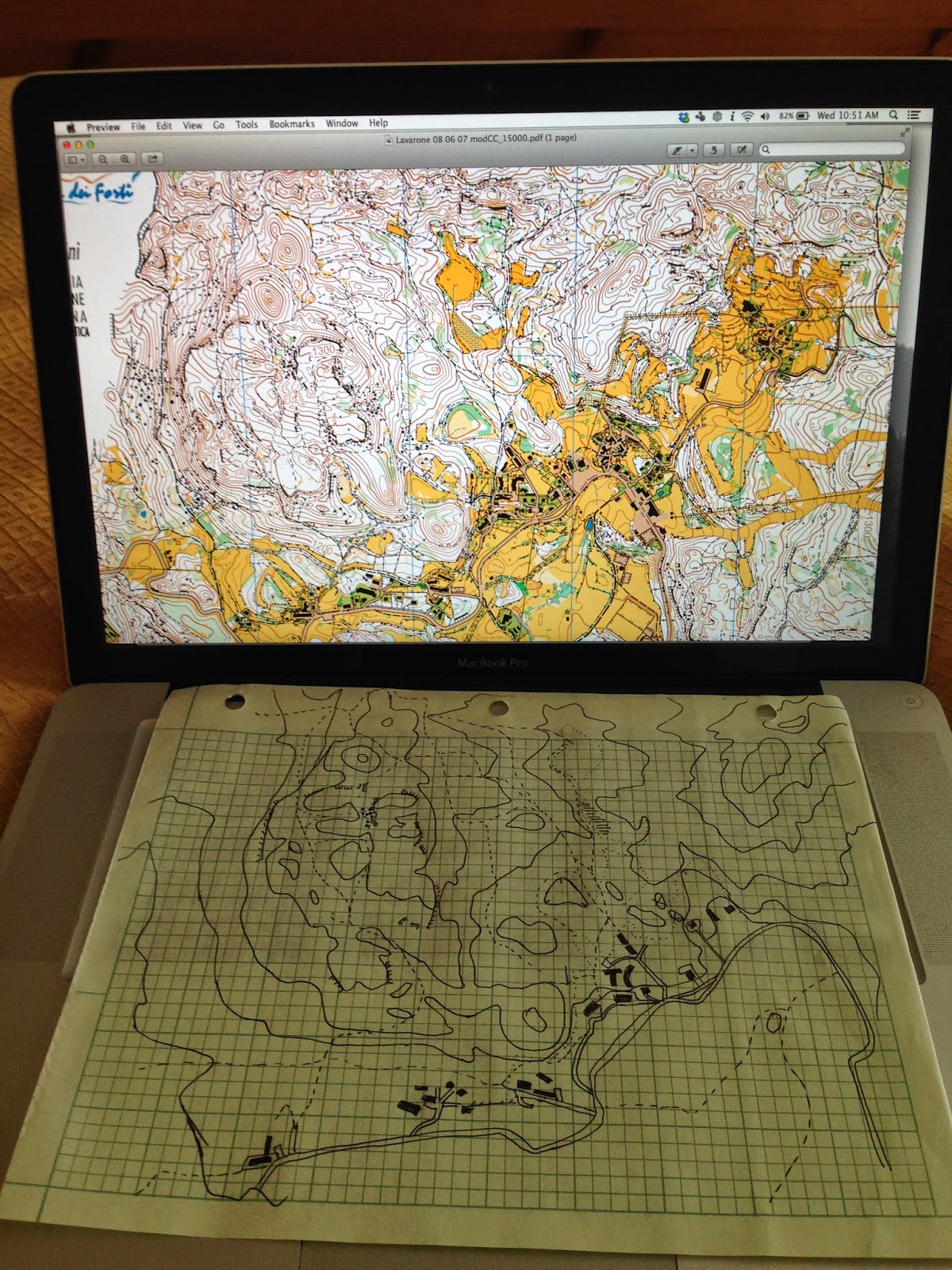 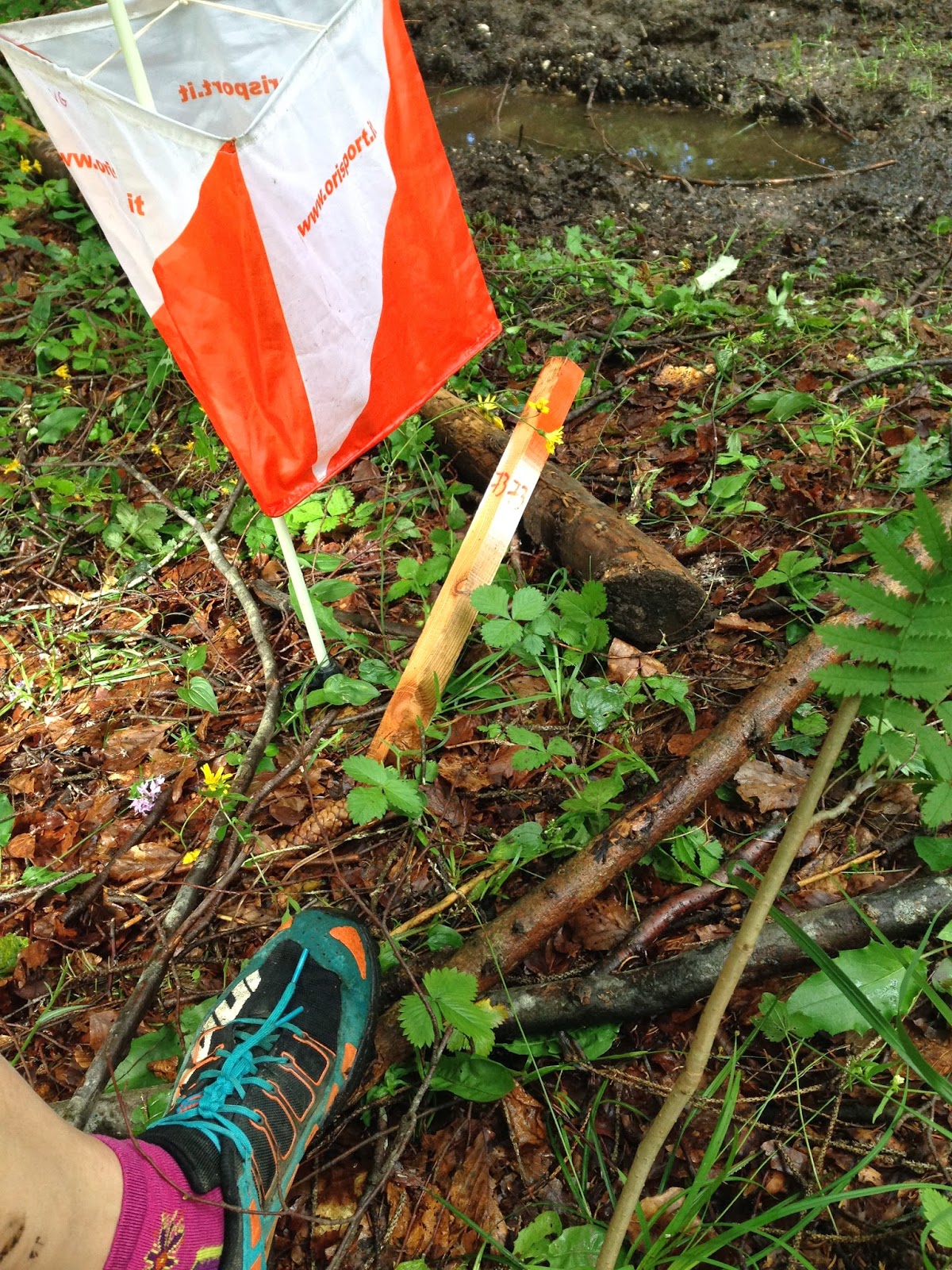 Look, my X-Talon found a control! 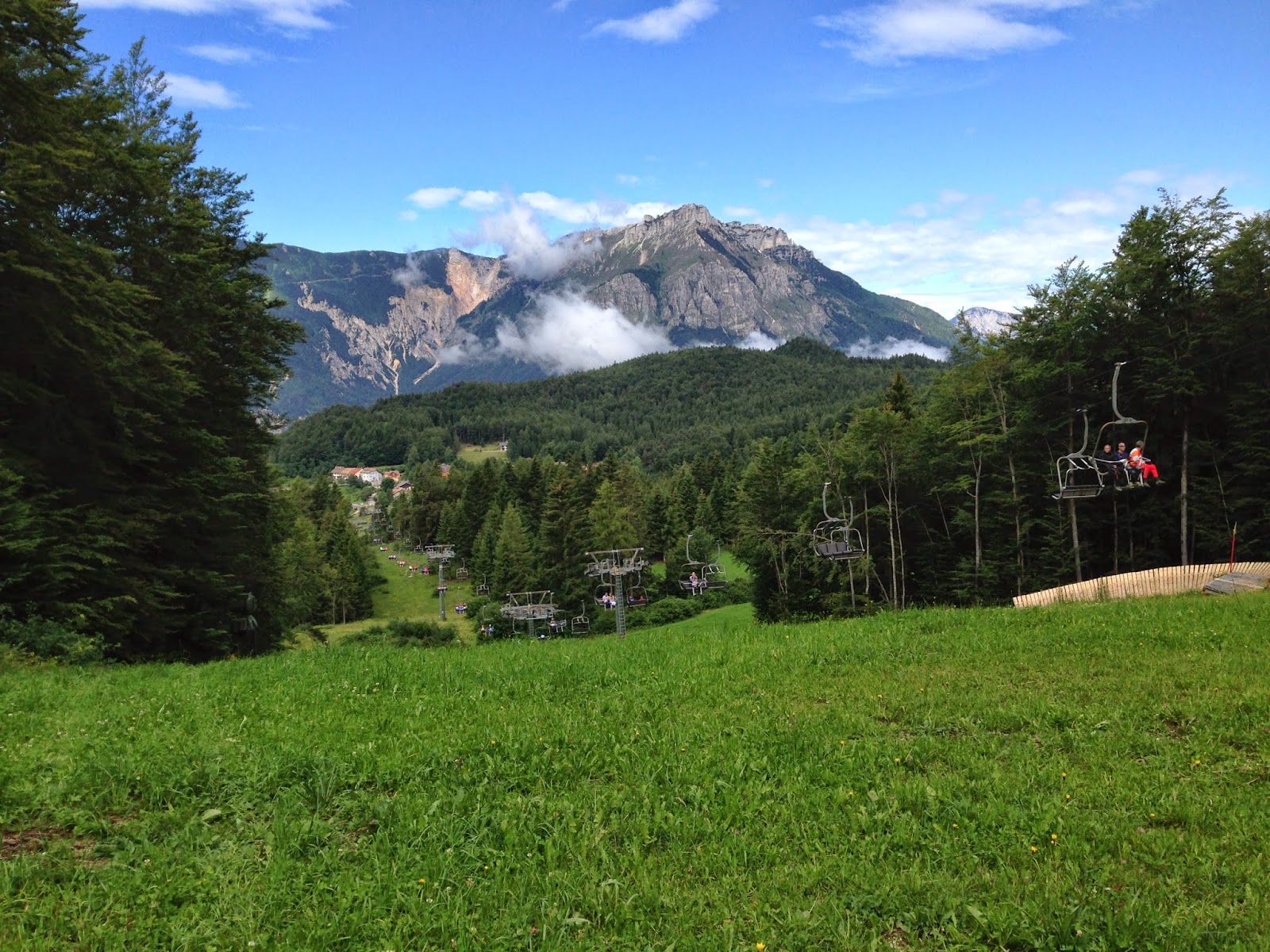 Another view from my "recovery" jog.  I wish I had had time to run up that peak, seemed totally doable, but probably not wise when you are still trying to remain rested for your most important races of the year. Darn.
Posted by Alex at 10:47 AM