Just small hills, but I've been enjoying letting my feet take me up and down hills with the occasional rock thrown in, lately.  Two weekends ago, Ed and I headed down to Connecticut for the People's Forest trail race, which I did last year and very much enjoyed.  It's a short race, in the trail racing world, just 7 miles with a modest 350m of elevation gain, and Ed figured it would be a good one to try out; I was psyched he wanted to come.  Last year I won, but so much is dependent on who shows up, and this year someone showed up who is faster.  I think I may have been closing the gap on the downhill, but then I took a wrong turn right near the end, stupidly, and lost about 3-4 minutes, as well as 4 places to guys I had worked darn hard to pass.  That was a bummer, but you gotta pay attention to the course in trail races, and when I revisited the location of the tricky junction in my cooldown, it was really quite obvious that I should have gone the other way.  What in the world tempted me to go left? Darnit!  At least that was just a 3-4min error; Ed and a group of maybe 6 other people made a wrong turn that gave them an extra 100m of climb and a solid 15 minutes of extra running! oops.  I believe that turn caused problems last year, too, so it's a bummer the race director didn't sign it slightly better this year.  Oh well, no harm done, and it was a lovely day for a run over rocks and hills with friendly people. 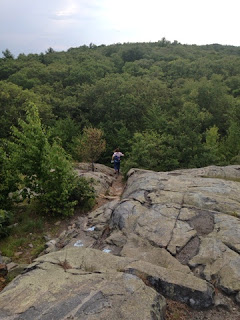 Here's a photo from a run (over hills) with Ed down in the Blue Hills.  We're so lucky to have a park like that pretty much right in Boston! 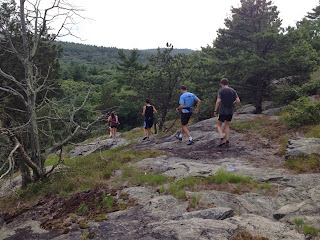 Back to the Blue Hills for a long run with some juniors and some orienteers and some washed up old coaches, this time on a humid day. Hey Alex, do you want to go up the ski hill too? One guess as to what I said... 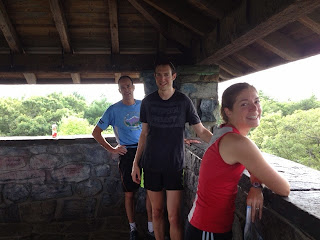 So last weekend I had been instructed not to sign up for any races, because it was family reunion time for Ed's family in Vermont.  That's a great place to hang out in the summer, and it's been so dry that the bugs aren't even a problem.  We had lots of fun, including a hike with some of the family that quickly turned into a 10 mile run over 700m of climb on the AT, no complaints here!  We are so lucky to have the Green Mountains and a 2000-mile trail right out the door there.

And then driving home, I *may* have gotten side tracked and stopped to run up Mt. Monadnock, having never climbed that one before.  It's a lovely little peak, with great views and lots of rock scrambling. So much fun! I was feeling so grateful for being me as I scrambled up that hill, that I can just pull the car over and do stuff like this, spontaneous joyous bounding up and down beautiful trails.  Love it.

We're racing Savoy Mountain trail race this weekend; I did that one last year and it certainly has its share of hills and rocks! Can't wait! 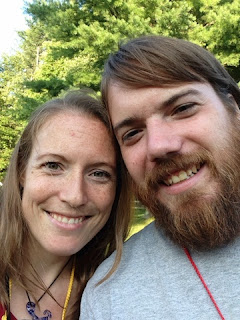 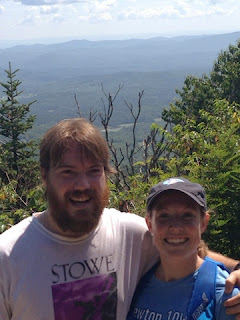 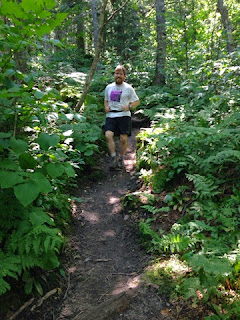 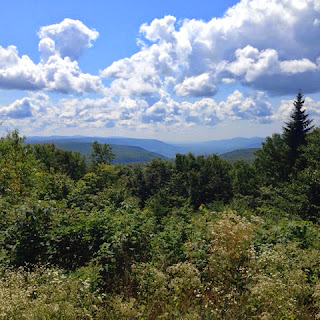 Looking east from the ascent back to Mad Tom Notch.  What a day for running! 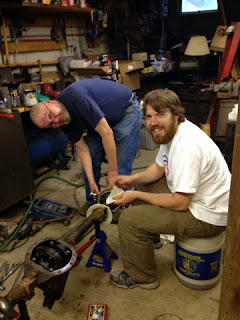 Ed and his dad rebuilding an ancient jeep in the cabin in Vermont. Someday, it may even resemble a jeep again.
Posted by Alex at 3:08 PM