Ed had so much fun at People's forest race he wanted to do another one, and he figured he could handle 14 miles at Savoy, so to Savoy we went, at early-o-clock with Ari. Wheee trail racing!

The goal for today was to break 2:30, considering that last year I did 2:48 with a cold, so really couldn't breathe too well and had been trying to take it easy. The weather was good this year, 60-ish and cloudy with a low dew point. Kelsey and Kehr were both there, and I hoped to start with them and see what would happen, but Kehr started fast, as she does, and Kelsey chased, and I wasn't ready to go into the hurt box that early in a 14mi race, so let them go to race my own race. Redlining in the first 10 minutes and then being unable to run well due to lactic buildup for the remaining 115 minutes is both stupid and not-fun. Still worth racing even if you can't necessarily win. I fell into stride with Tony Bonanno early on, he's a self-proclaimed downhill runner, so we were roughly close in speed. Past the first aid ~6min faster than last year (that's what running the uphills instead of walking will do, eh?), through the two powerline cuts, and Ted Cowles caught up on a climb. I tried to keep up with him to the next aid station, gapping Tony slightly. Dropped my bottle on a rock there, and climbed up to Spruce Knob and the awesomesauce ridge. The views south along the Hoosac range are fantastic from Spruce Knob, and just like last year, I was filled with that feeling of accomplishment you get when you've arrived somewhere via your two feet (and especially when those feet are clad in X-Talons).  Wahooo! 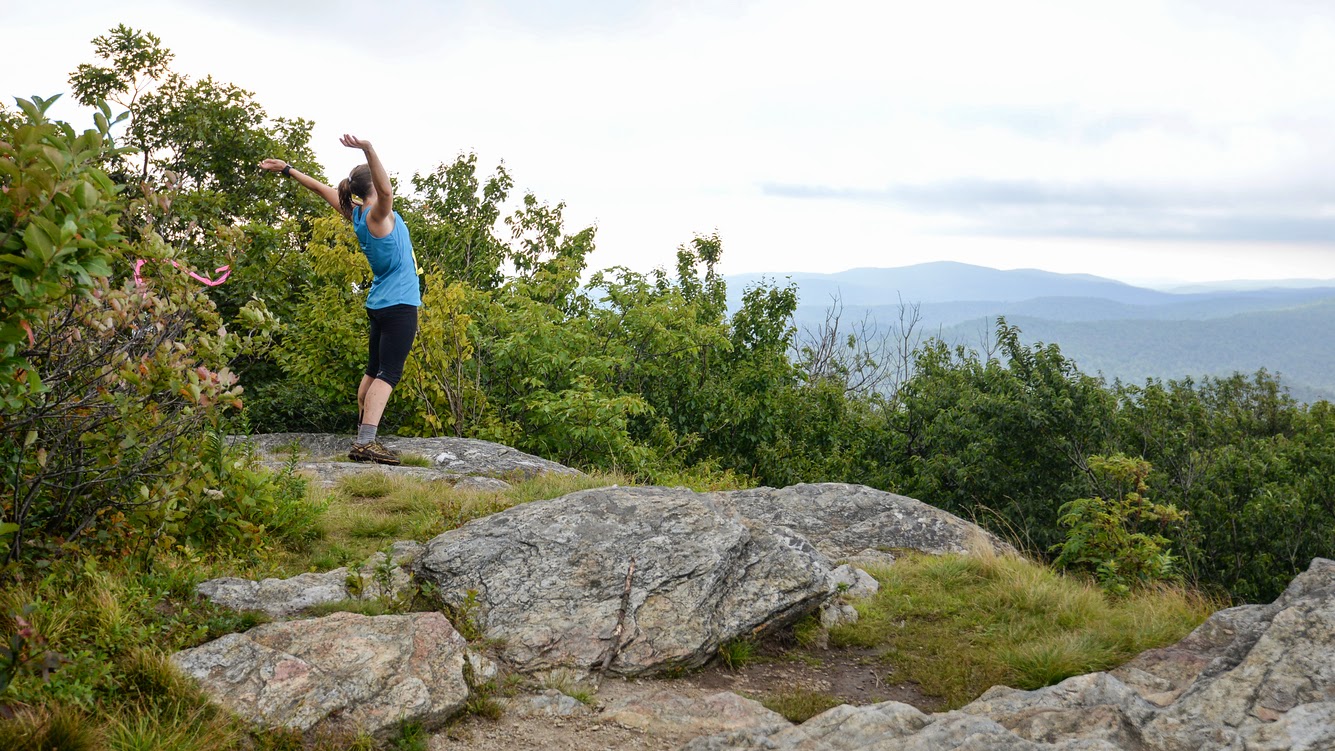 Apparently, I actually stopped to whoop, and Ben Kimball of NortheastRacePhoto was right there to capture the moment.  I don't remember stopping, but I do remember giggling my way down the rest of that ridge, just absolutely loving it and living in the moment.  I am so thankful that I can run the way I do in the places I go to!  I caught two guys along the ridge, then passed Ted as we started the downhill to the turn-around, passing one other kid along the way. Woo!

That downhill is uber fun, winding around, super runnable, not that steep, not that rocky, just super fun. Unfortunately that means no benefit over anyone else, since they can all run it fast too, but that's ok. I saw Kelsey and Ari and Kehr coming back up and estimated a ~6-7min deficit, and while I wasn't super happy being that far back, that was the situation, and if I could keep the pressure on there was a chance one of them might fade or bonk. I ran every step of the return uphill and the ridge, and Ted didn't catch up, which meant I was running well, since I hadn't gapped him by that much on the downhill.

I high-fived Ed near the top of the climb, which gave me some energy, but I started to get tired near the end of the ridge, and sort of picked my way down to the aid station more slowly than I'd like.  Anyway, I tried to keep pushing the downhills from there, and I was actually glad that they were runnable and grassy and squishy. The bit between the two powerline cuts was still muddy (isn't it funny how you sort of hope that the crappy parts of the course won't be so crappy when you get there again?), and that was tough, but when I hit the final aid station it was only a mile left, phew. I'd been running alone since 8 miles, and that made it tough to stay motivated and pushing. In the end I was well under 2:30, but Kelsey won in 2:13, so I lost equal amounts out and back; partly the fact that I was alone for the entire return trip worked against me, but partly I'm just not fast enough, especially at the end of a heavy volume week. Whatever. I had oodles of fun, and gave it what I had on the day. Whee!  (Results) 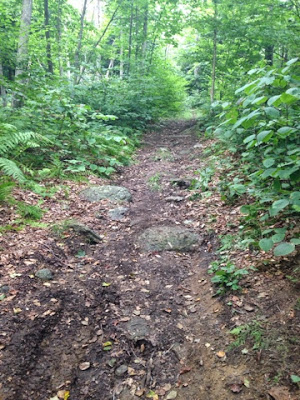 Some of the final bits of trail - totally runnable double track. 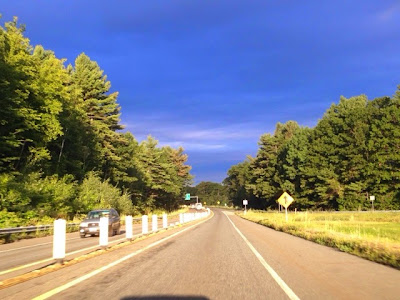 As Ari drove us there, we had this sky and this light. My favorite combination. I suppose it explains why at times the woods were pretty dark, but the storm never broke. 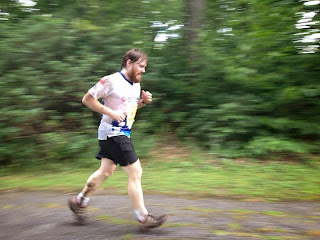 I had a chance for a quick cooldown and swim/wash in the lake before Ed came through, still running, though sort of grimacing too... 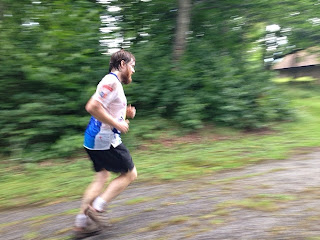 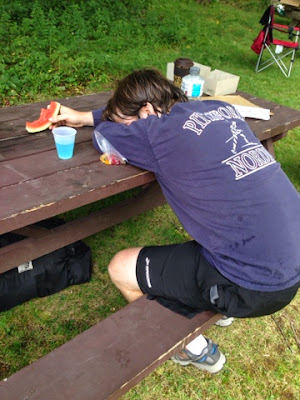 He assumed this position for a while.  I can relate. 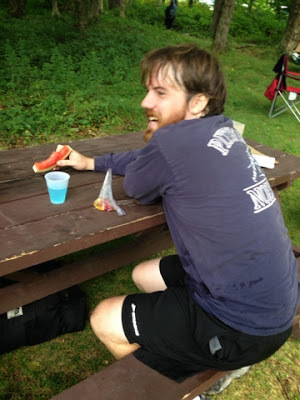