The first race of the season, and my first race as a master, took place last weekend up in Middlebury, VT at the Rikert Touring Center.  CSU, as always, arrived en masse, complete with our awesome wax team and 40+ pair of skis to wax. We got this. I'm not exactly feeling very fit when it comes to ski racing right now; fit enough to run up some hills but no staying power, and definitely no upper body power - you mean skiing on weekends only isn't enough to make you fast? I don't understand. The good news is that each skiing effort feels just a little bit better, so I'm slowly starting to race myself into shape. Ski-o in Norway in two months may not be pretty, but at least it hopefully won't be too pathetic. 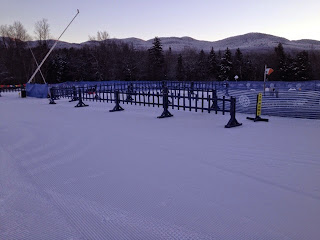 The first race was a classic 5k, 10k for the men.  Classic skiing takes more strength than I care to admit, and even though I'd been feeling awesome classic skiing in great conditions at Prospect last weekend, there is apparently a difference between touring through the woods and racing up hills. I struggled to find my stride, and it felt like every double pole was ripping my lats off my body, so that wasn't quite the idyllic striding and gliding I'd envisioned. I tried to keep thinking about skiing pretty, and enjoying the day, and that got me through with a good attitude, but it was disappointing to feel like I sucked so much at a motion I love so much.  Well, let's try skating tomorrow, I've done more of that in the recent past.  The good news was that my elbow tendonitis, the reason behind my lack of ski training, didn't hurt at all, so I figured there's hope, and I should probably do more classic races, and then they'll get easier.

The skate race was a mass start, which is always fun. Thanks to my results from last year, I had a good seed, starting #23, in the third row, so the plan was to just chill, stay relaxed and not freak out about the streams of people going by. I'm good at mass starts, and picked up about 10 places right out of the stadium when the group mentality randomly shifted into snowplow mode, but then things spread out a bit as the big guns up front started battling. I was in a mix of decent college skiers, and doing my best to just chill. My legs felt ok today, but definitely not snappy.

We got to the start of the first real downhill, about 2.5 minutes into the race, and on the first corner, a 180 left-hander with totally fine snow, a girl to my left decided to not make the corner, and headed at me screaming. I step turned around her, but apparently she caused a good 15 person pile-up behind me. Nice one. I never had trouble with traffic after that, though apparently a lot of my juniors (and, more importantly, my coachly rivals, Kathy and Maddy) got caught behind the mess. I skied most of the second and third fingers of the course with Hannah Miller from Bowdoin, going sort of threshold pace up the hills. I can do that, but any harder and my muscles start to shut down. It was fast enough for the pack I was with, and my skis were quite fast, allowing me to tuck past people who were skating in a few places. My upper body was mostly cooperating, as I tried out this V2 stuff, and found it actually much more restful than a flailing V1.

The downhill on the second finger was pretty treacherous, glare ice and not much berm before you fell off the edge of the trail, but I've got good edges on my Madshus and trusted myself, so always made it through fine, generally dropping more timid skiers. Positioning stayed roughly the same into the second loop, hovering around 20th, though the SMS junior from my pack was pulling away, so I moved in front of Hannah to chase a little. Mackenzie was definitely in visual contact for me, and I was shifting into hunting mode, but I could hear from the cheering that there was a group closing from behind. Up the second finger (the only A climb of the course), I was starting to become aware that there is this room inside of me one could term the pain cave, but I hadn't really opened the door yet. It also occurred to me that a real skier would be used to this sort of effort, because they do intervals.  Interesting thought.

By the top I could tell that the top coat of fluoros was wearing off, too much Tokyo drifting around the corners probably, but it was still fast enough conditions that I didn't need much fitness to hang on to my group. The chasing group of a Bates girl and two Canadians caught me up the hill on the third finger, and I hopped in behind, thinking maybe I could get them back just before the downhill. Unfortunately I then did exactly what I'd warned my juniors not to do, and tried to get too aggressive on a downhill, took the inside line and totally slid out on a patch of glare ice, landing face first somehow and popping my pole out of its quick-release thing, which led to me crawling back up the icy hill trying to not get run over by the next pack. D'oh! Pretty pissed about that one.

I made contact with that next pack of three by the bottom of the hill, but didn't have the strength (or, honestly, the desire to investigate that pain cave) to keep up on the loop around the stadium and the pursuant flats to the finish. I'm bummed that I fell on my face, for no good reason, but hey, that's racing, and at least I didn't break any equipment. It felt good to toy with the idea of going hard, and maybe at the next race I'll begin to be able to tap into a real effort. We call this "racing into shape", and it does work, if you can put up with the several following days of tiredness. But again, elbow feels just fine, so this is pretty exciting. 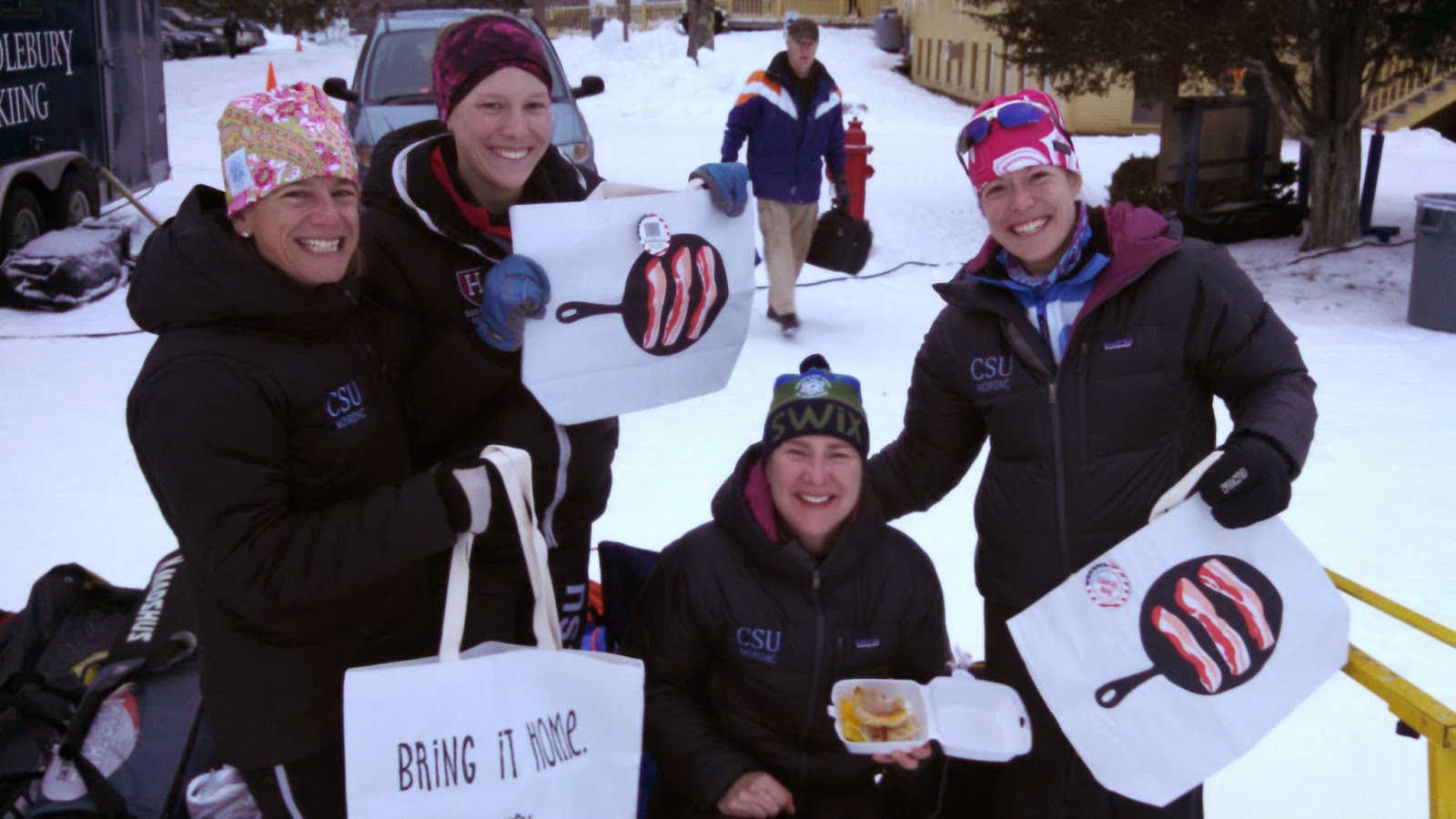 CSU coaches have a thing about bacon. So, Amie got us some bacon tote bags, which is pretty damn awesome. 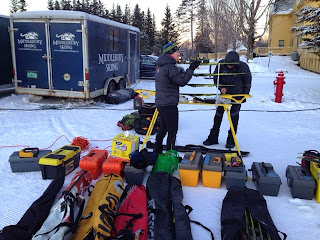 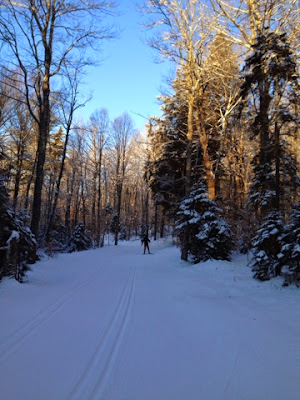 These sorts of mornings are the reason I love ski racing, ski coaching, and hell, just skiing.
Posted by Alex at 12:16 PM