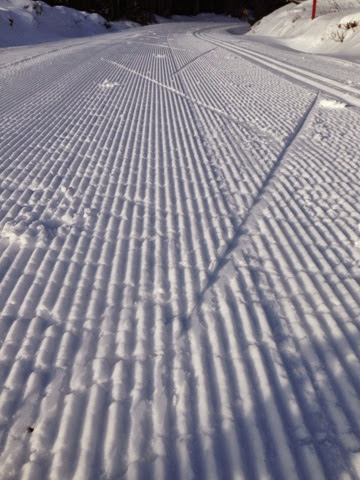 Like any good pilgrim, I left home with a destination in mind. This destination is a cold place, but the skiing is great.  I was lucky enough to build a two-week trip around this annual pilgrimage to skiing Mecca , starting with the Eastern Cup in Middlebury, then rolling westward to land in Rochester, and spend some time working in a different office and visiting the parental units. They have just about given up on Christmas; no tree in sight meant we drew one with crayons and plastered it to the wall, to at least give some pretense that we are honoring the pagan God and his twisted westernized version of a Christian holiday.  As always, the visit was too short, and the mindless drive across frozen brown flatlands of southern Quebec was too long, inducing some not-unexpected seasonal depression and feelings of desolation. But finally, with no automotive mishaps (not a given, with my sometimes-less-trusty-than-I'd-like Civic), I arrived at my destination - a mostly-deserted parking lot by the Alpine area of Mont Sainte Anne.  At last! Skiing up trail 11, following the river under a crescent moon and listening to the water and the swoosh of my skis, I could feel the tension draining away, the motion clearing my head and opening my lungs.  This place may be far away, but it's worth it.

Skiing in the dark has some sort of magic in it.  Time slows down, time doesn't matter, all that matters is the motion, and it got me thinking about the people who were so influential in causing me to love this sport. I love my family, but we were not, are not, and never will be a nordic family, as much as my parents sometimes try to pretend like they enjoy themselves when I force them to strap on skinny skis.  My thoughts started to spiral way back, to the origins of my need to run and my need to move, but ultimately this obsession with skiing started some time in my sophomore year of highschool.  I'd been convinced, coerced, pressured into trying this sport by the girls on my cross country team, and I didn't have much respect for it. Real skiers ski down hills. Quickly I learned respect, and that real skiers ski up hills. No stranger to hard work, I knew I wanted to be good at this silly sport. My coaches were fantastic, though they weren't necessarily the ones who taught me to ski well. They taught me more important things, like how to be a good person, and those are the lessons I try to pass on to my own skiers. Anyone can teach technique. Though I do happen to be much better at teaching technique than teaching the important stuff. As the years went on, skiing became more and more fundamental in the fabric of my being. Is this good? bad? inconsequential? It made me who I am as a person, introduced me to the people I consider my best friends, and opened doors to other sports and other circles. It gave me permanently sore shoulders and imbalances and overuse injuries that still plague me, and closed other doors to potential opportunities.  I guess most importantly, skiing gives me a medium through which I can deal with the world and work out my problems. And I want to pass that ability on to my juniors that I coach. Who knows if I'm ever successful. Most of them will probably just learn to V1 better, but maybe there are a couple to whom I've actually made a difference. 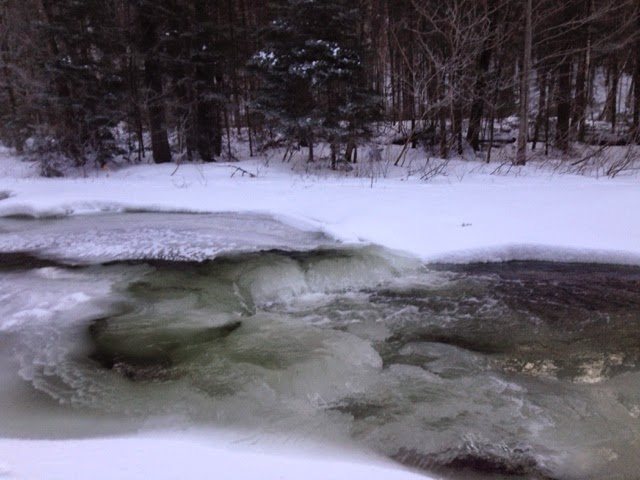 This is what river ice looks like when it goes from freely flowing to nearly solid in 36 hours.  The other cool thing was being able to see the ice clouds forming above the river, humidity being squeezed out of the air at -12 degrees Fahrenheit. 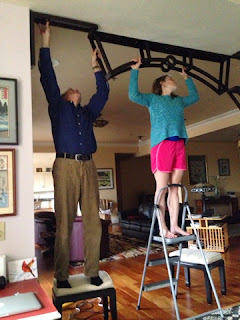 Home means random projects that have been saved up until extra hands show up. 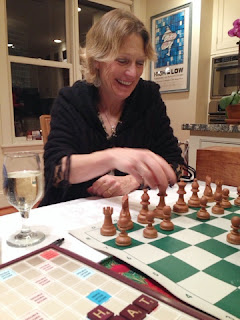 Home means games, of all varieties. 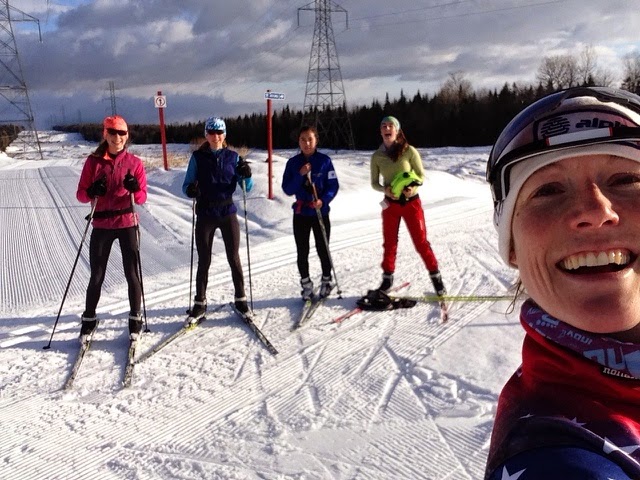 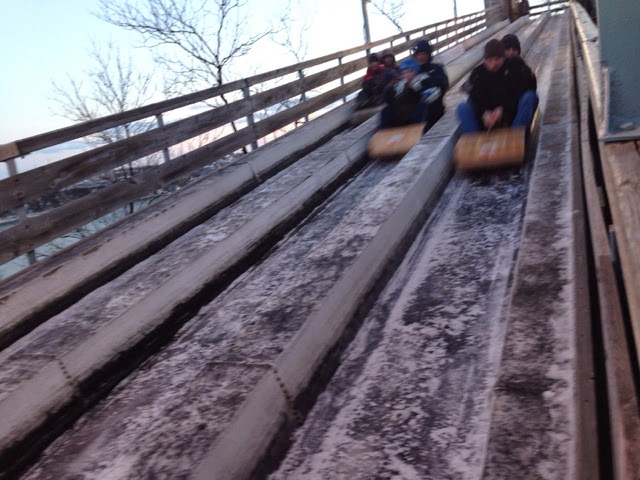 Quebec City has an ice luge thing in the center of the city. You pay $6 for the privilege of carrying a sled to the top of the slide, and then riding down and hoping you'll stop when you hit the giant snow pile at the bottom. Needless to say, this is a stupidly fun entertainment. 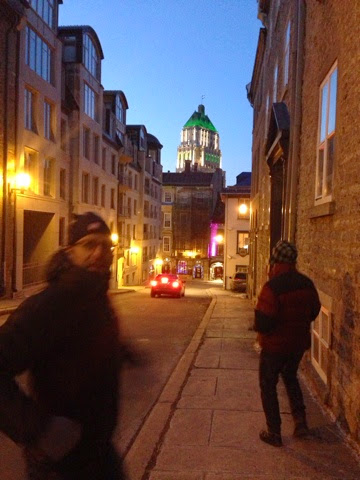 I wasn't going to go in to the city, opting for an afternoon ski instead, but Kathy rightly pointed out that skiing hadn't yet cured my nasty-sounding chest cold, so maybe I should try something else. As usual, Kathy was right, and I had a good time.  Quebec is a cool city, but very hilly.  The reason we had the afternoon off was that we'd done a time trial in the morning, and, showing some restraint for the first time in possibly ever, I opted to sit it out, going for an easy ski instead.  I picked up a cold while in Rochester, that had gross new developments every morning I was in Canada, culminating with a monster living in my chest and trying to claw its way out.  Every time I'd laugh, my chest hurt. If you know me, you'll know how much my chest was hurting.  I was also hurting really badly from having a bad crash day - the sort where you can't stay on your feet, but you keep trying to conquer your demons and go faster and lower down each hill, thus falling faster and harder each time you do.  This left me feeling pretty battered for the next day or two. 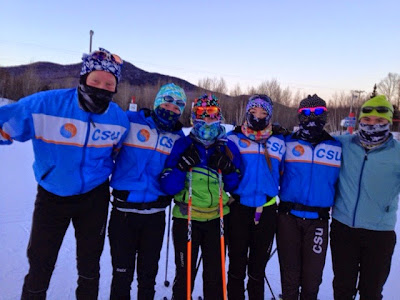 It got reeeeaaaaaal cold for our last few days up there.  But that's normal, so we were all prepared. 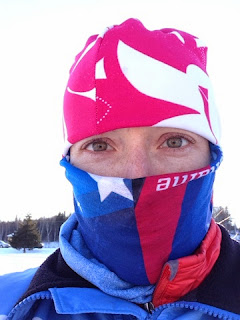 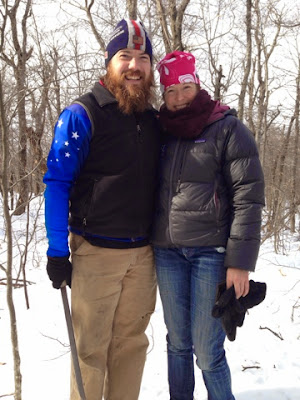 Camp came to an end with the usual frigid morningski and frantic packing of the condos.  Kathy and I had a really great condo of kids, all very helpful and fun to be around, which makes the trip so much more enjoyable.  We were all set to take off and head south until my car wouldn't start, so that delayed things a bit, but eventually I was on the road, barreling south to the tunes of a good Quebecois folk music station, with a strong tambourine and accordion theme to each song.  Made it to Vermont with the last vestiges of daylight in the sky, took a nap, and then was ready to ring in the new year with Ed and the usual VT crew over at his cousin's house.  A cold night, where you can't stray away from the bonfire for long, but a fun night, filled with laughter (less chest pain than two days ago) and good people.  New Year's day involved climbing a small mountain I'd never been up before - Holt Mt. We weren't actually planning to climb a mountain, but that's one of the possible dangers of wandering into the woods with me.  "ooh, look - a mountain! Let's go up to the top!".  Thankfully the snow had a good hard crust, making it an acceptable activity for someone who is both ill and hungover.  Found the jar with other people's names in it, and we were, unsurprisingly, the first 2015 visitors.  Start each year doing something you love, right?

Now to kick the cold, do some ski-o, and, very excitingly, next Tuesday is the first master-blaster race at Weston!  I don't know that these last two weeks have been very relaxing, physically, but mentally I'm feeling pretty ready to conquer the world. I think that's the point of the annual pilgrimage. Time to go for a ski!

Ta;
this is an uncommonly excellent bit of writing. About self, about sport, about life. Keep going!
Papa